It seems like forever since I posted, but the calendar says its only been 10 days.  I did take a bit of time off to visit my brother in Alabama.  Then, I had to concentrate on filling orders from those days off (still not all caught up).  Also, I’ve been a bit stalled on building.

I had one boom of the Jumbo FW-189 done and – part of the reason for the building stall – I had a particular jig set on the building board to put the boom sides together.  I didn’t want to tear that down because I knew it would be better to leave it and build the second with it rather than tear it down hope that I could put the second boom together the same way with a different jig.

So, nothing on the building board changed.  Therefore, I could only build if I didn’t disturb that setup.  And the only way to do that was small projects.  I think I did a JetCat between building “booms”.  Haha, no building booms so far this year; I’ve been pretty slow.

Anyway, I decided to build that second boom this weekend.  The jig worked great.  I started on Saturday and – slow and steady – finished up on Sunday.  Now, I just need to build the fins and a new, finalized, cabin and I can shift gears to the second half of any build: covering and final assembly. 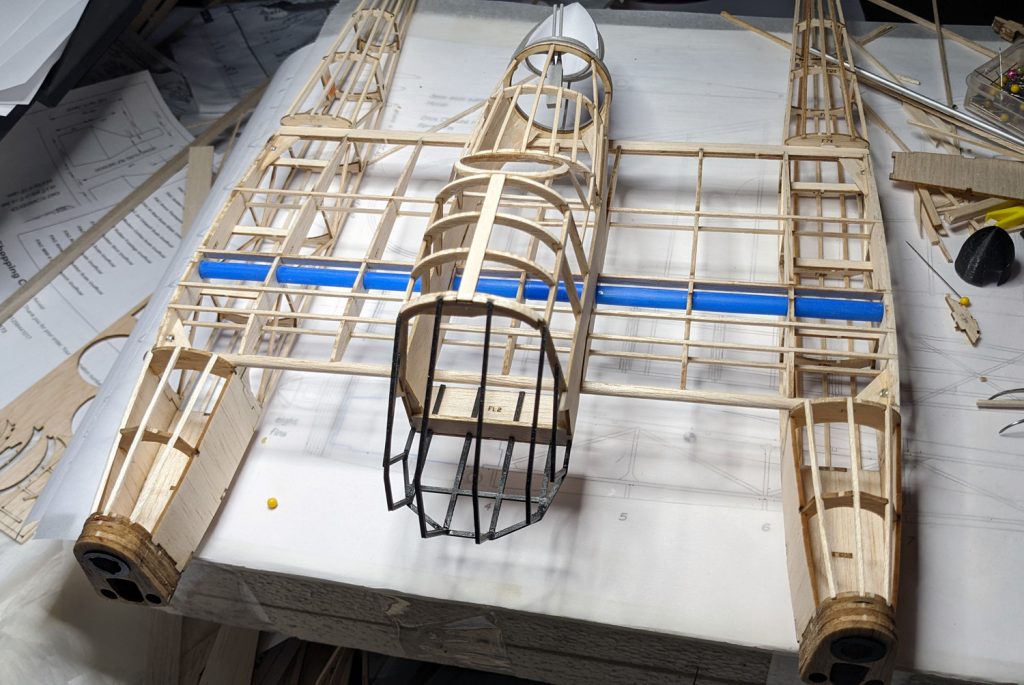 I’ve been slowly working on another project.  This one has been on-going for years – since at least 1994, maybe longer.  It is one of my favorite planes – Johnny Livingston’s 1933 Cessna CR-3.  This will be an 18.5″ span model.  Why that size?  That’s a slightly-involved story.

A few years earlier, I had built Tom Nallen’s Livingston Monocoupe Peanut model.  That got me into researching the Monocoupe, Livingston, and the CR-3.   I learned that over the years, Livingston had done many, many successive (and successful) modifications to the Monocoupe and it became a very potent race plane.  He then replaced it with the CR-3.  He did two things that influenced me:  1- the wingspan of the Monocoupe ended up pretty close to 24′ – which would convert nicely to 24″ – making a nice model, and 2- he took the motor from the Monocoupe and had Cessna build the CR-3 around the motor.  The CR-3 came out close to 18.5′ span, so continuing with a 1′:1″ scale, 18.5″ would be the size for the CR-3 model.  Wouldn’t it be great to have models of Livingston’s racers; the Monocoupe and the CR-3, in the same scale?  (P.S. I have collected 13 pages of photo documentation of changes Livingston made to the NR501W Monocoupe over the years he owned it – too much?)

I still have plans to do both, but for some reason, I’ve pushed the CR-3 much closer to the front of the build list.  I have been re-working the old plans for years.  I hope I am moving in the right direction.  The old plan certainly had potential:  Paul Boyanowski built the prototype back in ’95 and it flew great, winning its first contest.

Anyway, how much nose weight will the big, round-engined, short-nosed model need?  I am hoping its around 10 grams.  It is completely backwards to start a build there, but here is why I ask.  Here is another project that worked out this weekend – the dummy Warner Scarab engine for my 18.5″ model. 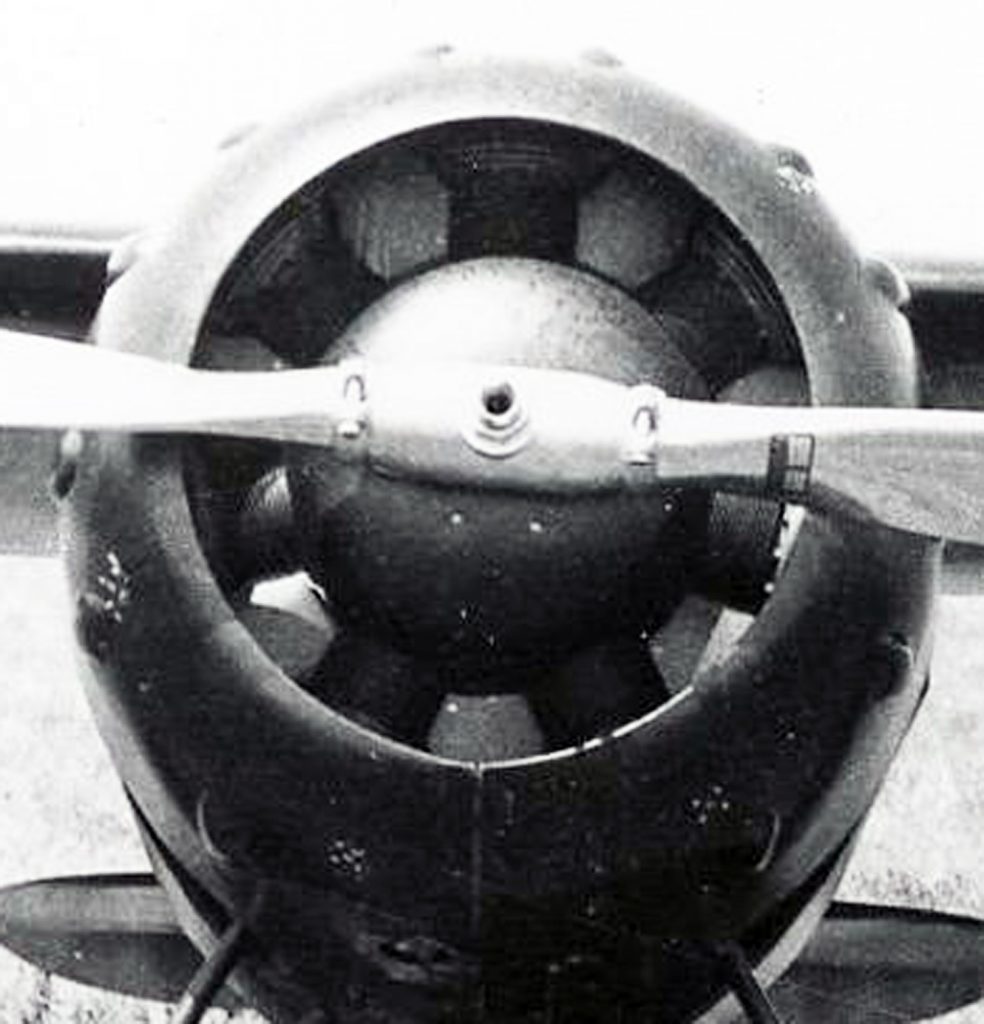 It all started with this photo of the original nose of the plane.  Notice the simplicity of the engine installation:  simple cylinders, a simple cover over the crank case, and simple baffles between the cylinders.  I like simple – and usually can do simple. 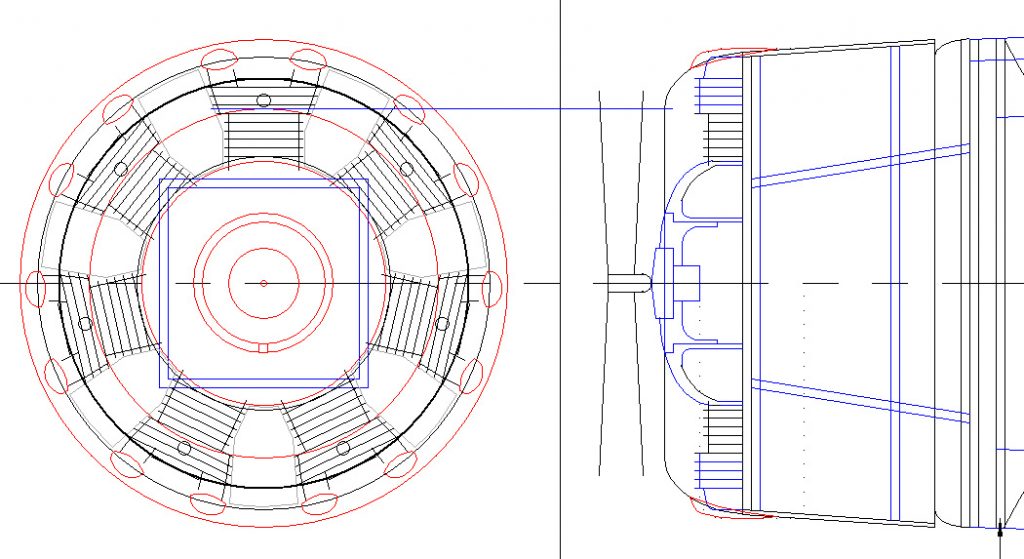 Next match the simple real to the simple model.  I only need to do half an engine – the front half.  Figure out how to lay out the cylinders and the crank case and how to integrate  a nose plug into it.  Not terribly difficult (remember to keep it simple).  All that was left to do was to convert the two-dimensional line drawings into 3D printed parts.

I made one and it ended up about 10.3 grams with the Gizmo Nose Button front half.  I decided to try again, thinning the parts as much as I dared to make them lighter.  I saved over a gram on just the seven cylinders and 2+ grams overall.  Attempt #2 weighs 8.1 grams.  I need to make a new nose plug and I might be able to trim a little off of that, too.

I will admit – that’s a funny place to start on a flying stick and tissue model.  Maybe I will get to the rest someday! 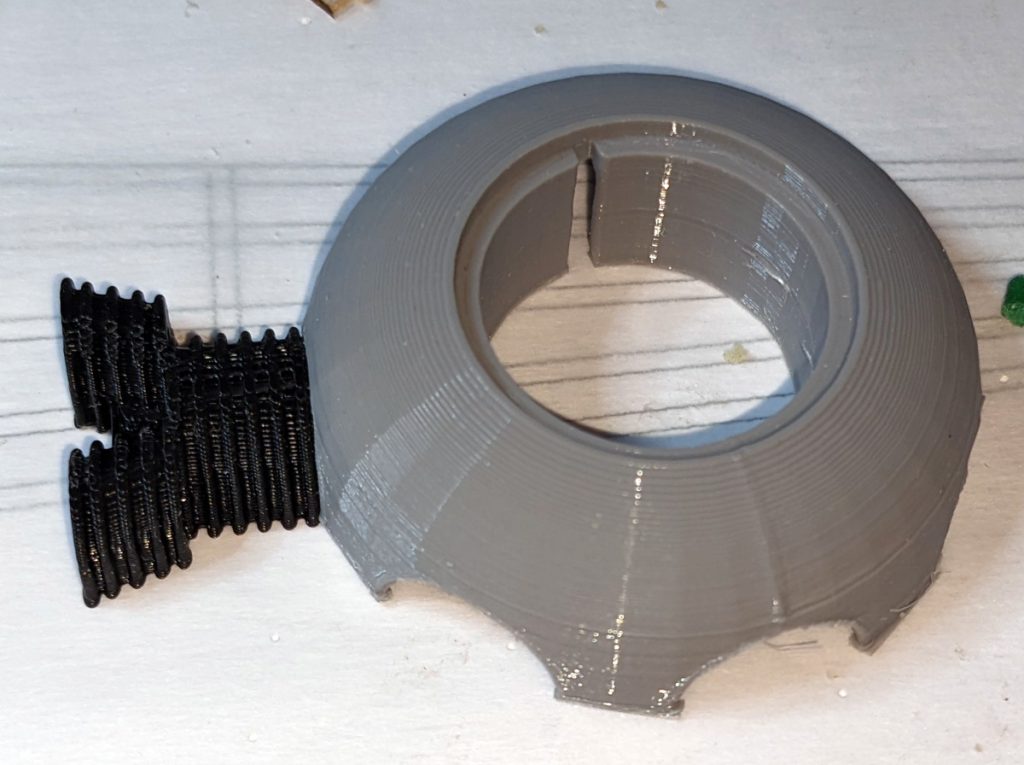 glue the cylinders to the crank case 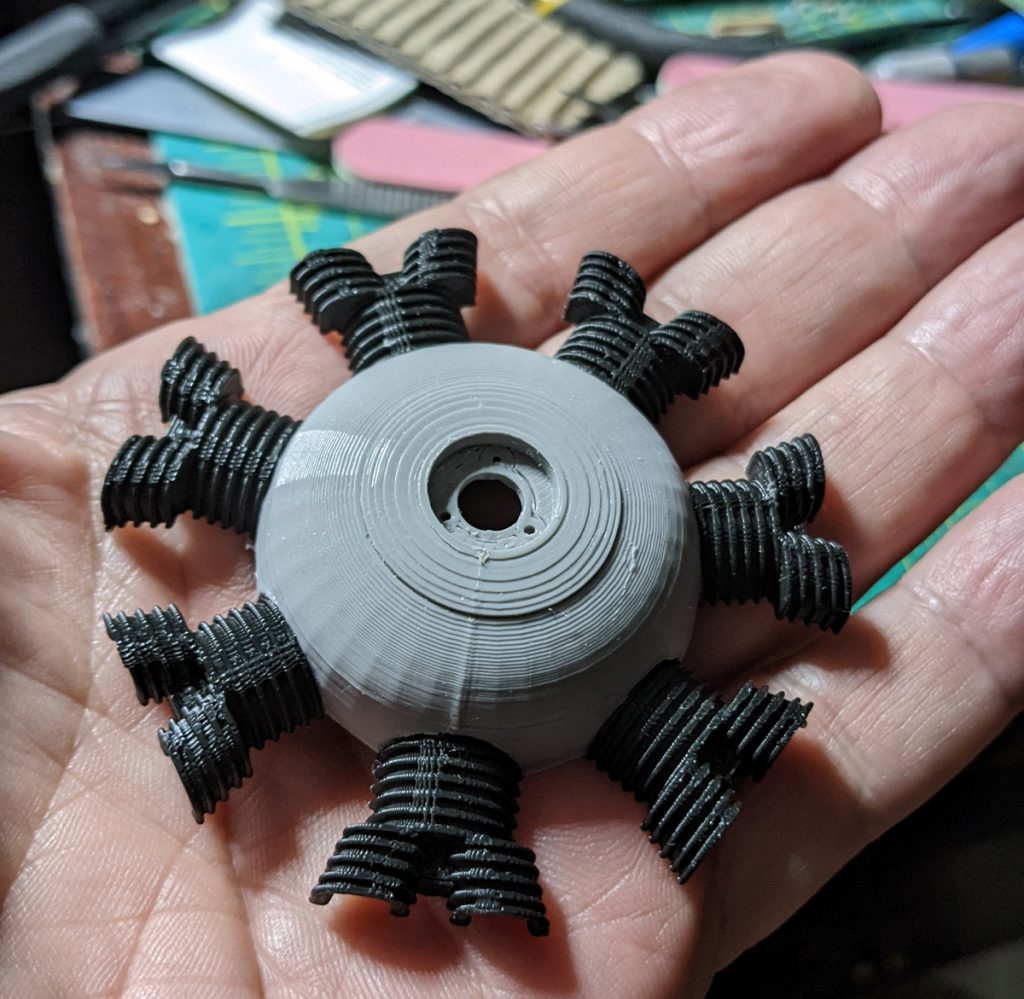 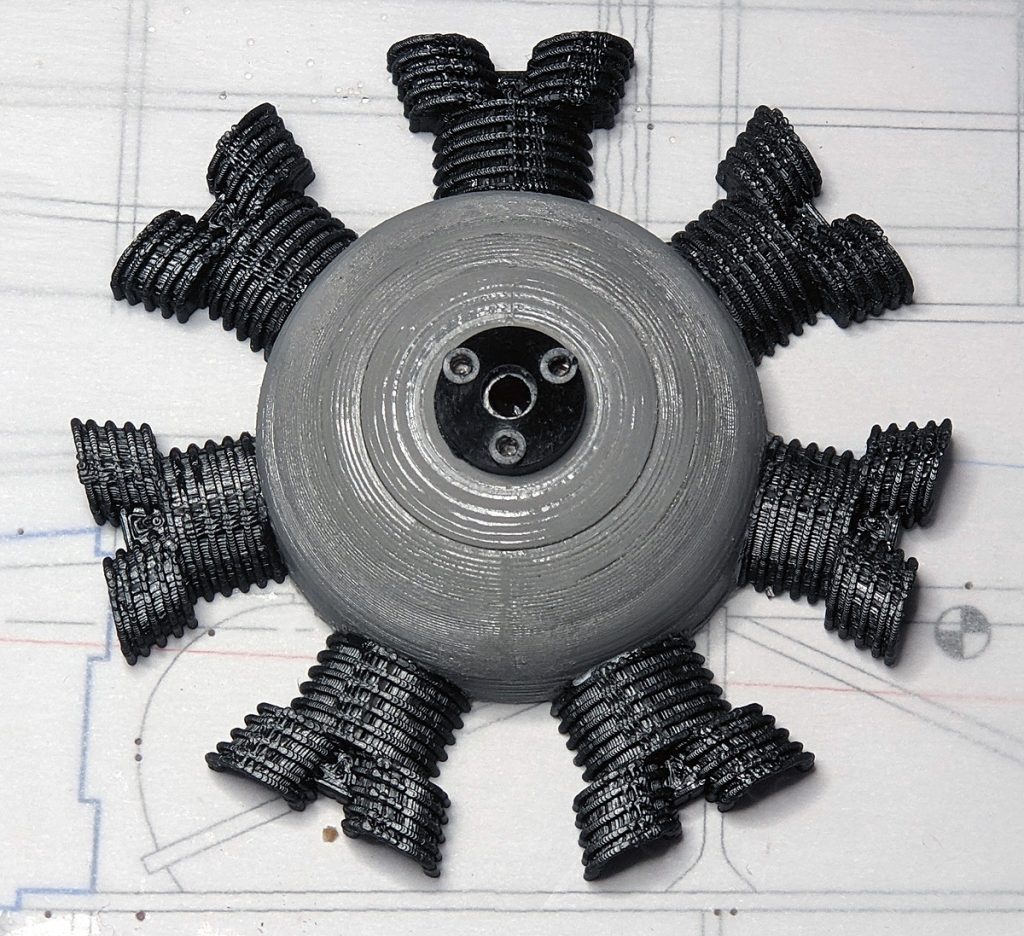 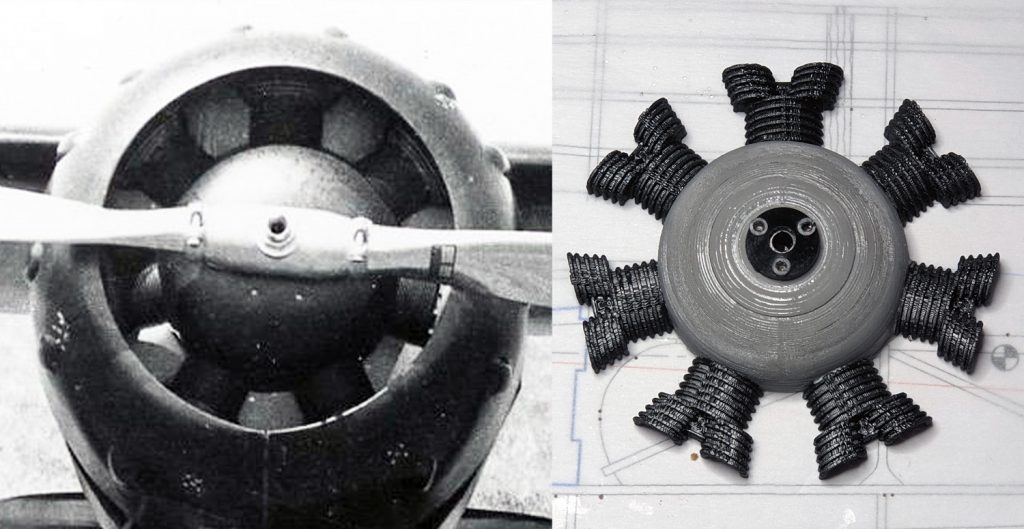