For years (at least back to ’99), I’ve been trying to design a good looking Embryo, that also flies well.  I want curves in the right places and performance, to boot.  One of the first successful ones was the Sky Rocket.  This had a Clark Y airfoil for the fuselage, and the tail fins recalled Buck Rogers and that adventurous era. 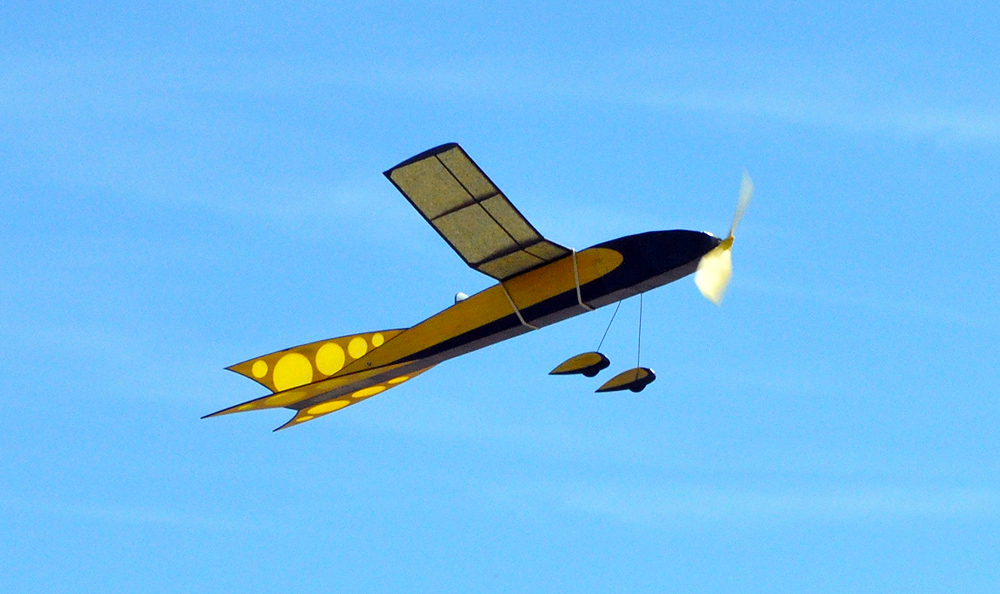 I think this was my third Sky Rocket. If it was the third, it ended up on the roof of the local high school during a testing session.

The next success was the Bad Axe.  This was based on Don Campbell’s popular Tomahawk Embryo.  I lengthened the fuselage and made a couple other tweaks to the design.  This was very successful for me, but didn’t quite have “the look” that I wanted. 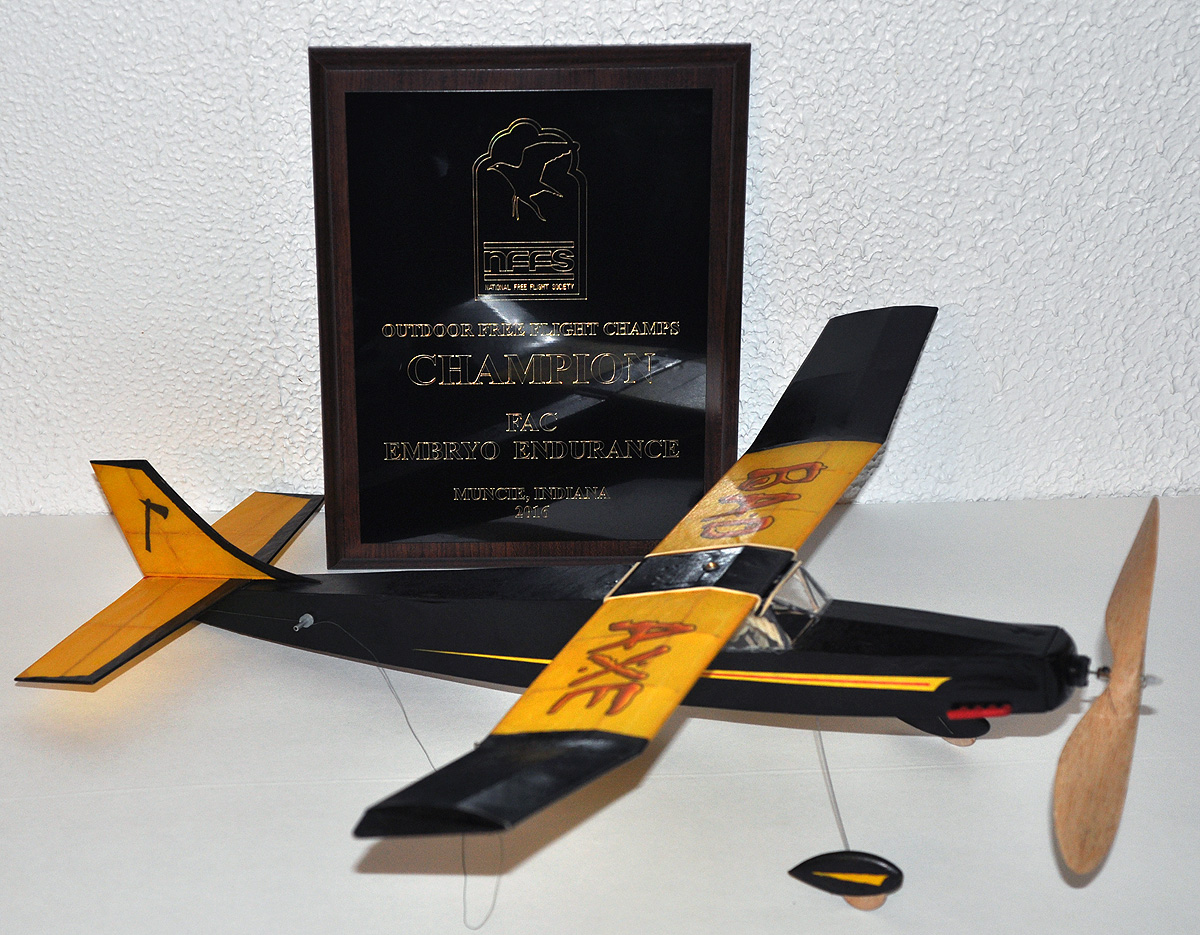 I did modify the Bad Axe for last season, extending it even more and changing the tail surfaces again.  I called it the “Bad Axe mk II”.  I pushed that one hard, loading it with rubber.  It flew away at Muncie when I said “I don’t need the DT” (isn’t that always the way?) 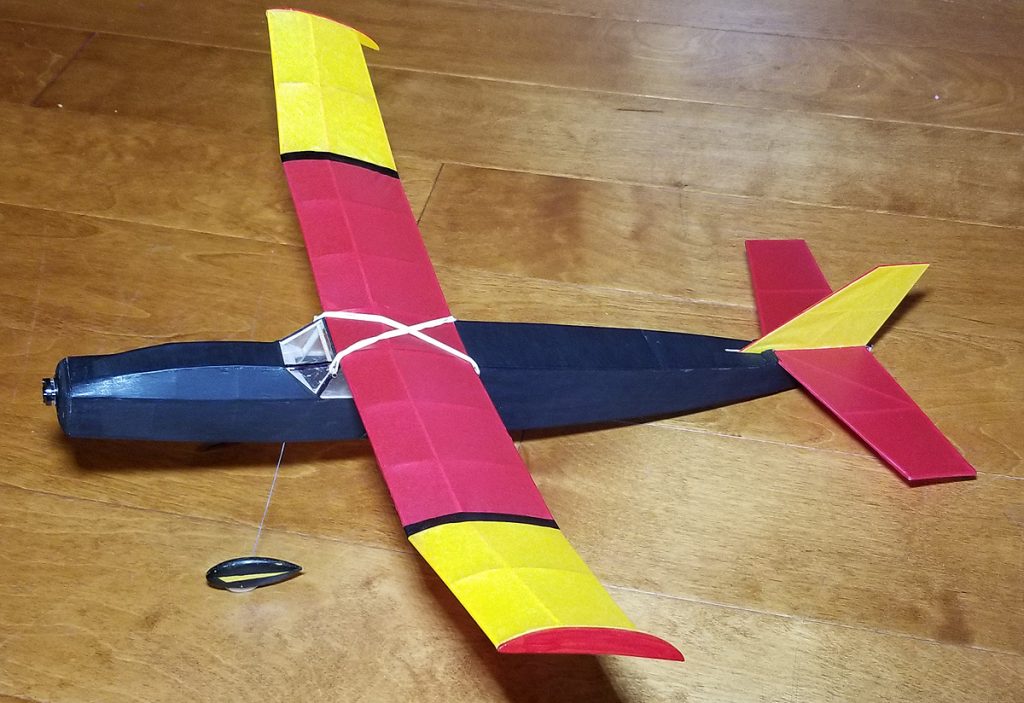 “BAMKII” (Bad Axe mk II) – Note that it had the landing gear and pants from my Champion Bad Axe.

Again, the model had performance, but lacked a little bit of flair.

Many years ago, in 2013 or 2014, I saw Jack Moses flying a cute little Embryo called the “Durham Mystery Ship”.  He thought it was a Dave Stott plan.  The thing was small for an Embryo – about 15″ wing span.  It looked like a Peanut, but flew very well.  I decided to chase down the provenance while drawing up the plan and parts for a short kit.  After I got the model completed, I discovered that it was NOT a Dave Stott plan, but it came from Tom Nallen I (thanks for the correction, John).  I built two of these – they flew so well – and eventually away. 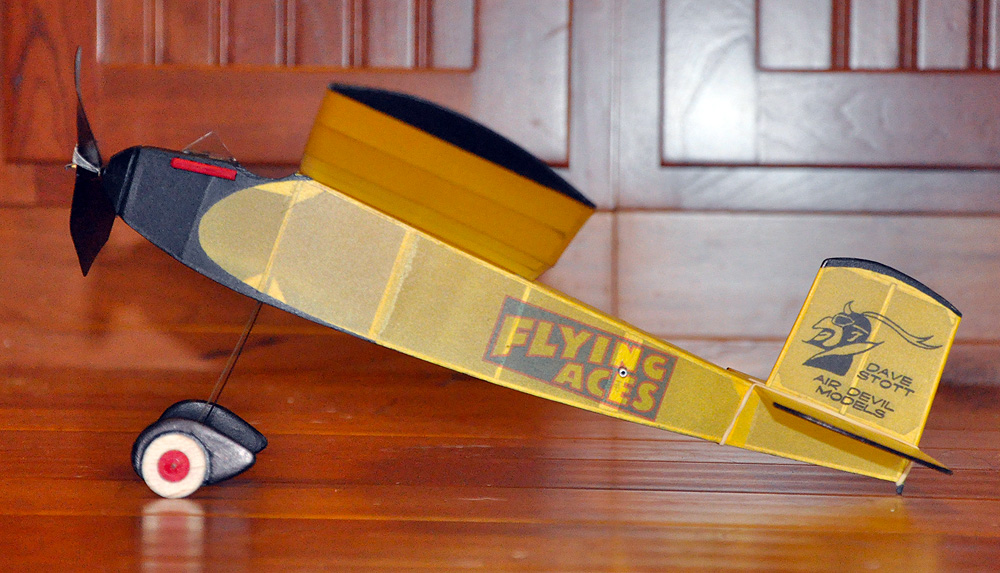 Winn Moore and I fly together at nearly every Cloudbusters contest, Muncie contest, and Geneseo contest. If he ever gets a short kit from me, he gets two – and flies the crap out of them.  We talk about things and models and designs and one of the things we talked about was lengthening the DMS (Durham Mystery Ship).  He actually scratch-built a longer version before I ever worked on a new short kit.  When I did get around to modifying the DMS, it became the Durham Air Limousine.  This was longer, had a different tail, and incorporated the Gollywock airfoil into the wing.  The wing was still stubby at 15″ and had the polyhedral added.  Mine looked great (for me).  It was short-lived as it flew across the road and got lost at a local contest.  It was returned to me some time later, but while it was recovered, re-covered, and back into action, it never flew well again.  But Winn’s were winners and eventually flew away.

My prototype Durham Air Limousine. It still has the DMS wheelpants and wingspan, but has a new twin tail and a lengthened fuselage.

In the Air Limo, you can see how nice the lengthened fuselage looks.  To me, the twin fins are classic.  While this was an ok performer, there was room for improvement – literally – the fuselage had not yet filled the width of my large paper.

Again, the “modify” bug was biting me.  While the Air Limo worked well, I feel there is still more performance in the design.  And while working on the next version, I struck on a striking design.  I love the way this new one looks:  The Durham Stretch Limo (I wanted to call it the Arrow, but Winn said it had to be Stretch Limo, and for continuity, he’s right.

This fuselage is nearly 18.5″ long (with 12+” between hook and peg), and that’s without the prop and spinner.  And the lines have gentle, sweeping arcs.  I stayed with the twin-fin tail.  These fins are the same shape as the fins on Lou Bucalo’s “the Shaft” Victory model.  But I added about an inch to the span of the stabilizer, to enhance the tail moment.  I also added an airfoil shape to the horizontal, hoping to take advantage of a lifting tail.

The wing has been changed.  I now have a straight wing at 16.625″ and incorporates tip plates, more for appearance than possible performance.  But they just might add a little bit – tip plates are supposed to work!  The airfoil is still a Gollywock airfoil, but thinned to 10%.  Again, undercamber is supposed to work.

The propeller is also a hopeful performance boost.  It is a formed prop from an Archie Adamisin design 3D-printed mold.  I designed the blades (Larrabee – 7″ diameter, 7″ pitch, 1.125″ blade width.  These are laser-cut, soaked, and strapped front and back with carbon fiber strips for strength.  These build light (about 1 gram) but are a bit fragile.  They work well indoors, so I am trying this one outdoors.  It has already been repaired a couple times after damage during testing.

It took a few days of testing to get everything trimmed just right.  I had to add a shim to the wing, set the correct tail incidence, and add a bunch of tail weight.  I have changed the incidence of the wing and tail on the plan, and shifted the wing and cabin forward a very small amount to correct these issues.  One thing I noticed was a little bit of wing-and-tail-waggle.  I did a little bit of research and read that this is Dutch Roll and can be cured with a bit more fin area.  So I cut an upper fin and glued it to the center of the horizontal, making the twin-fin a triple-fin.  It is very stable now and the parts for the third fin have been added to the plan and the laser-cut parts.

Here are other build photos. 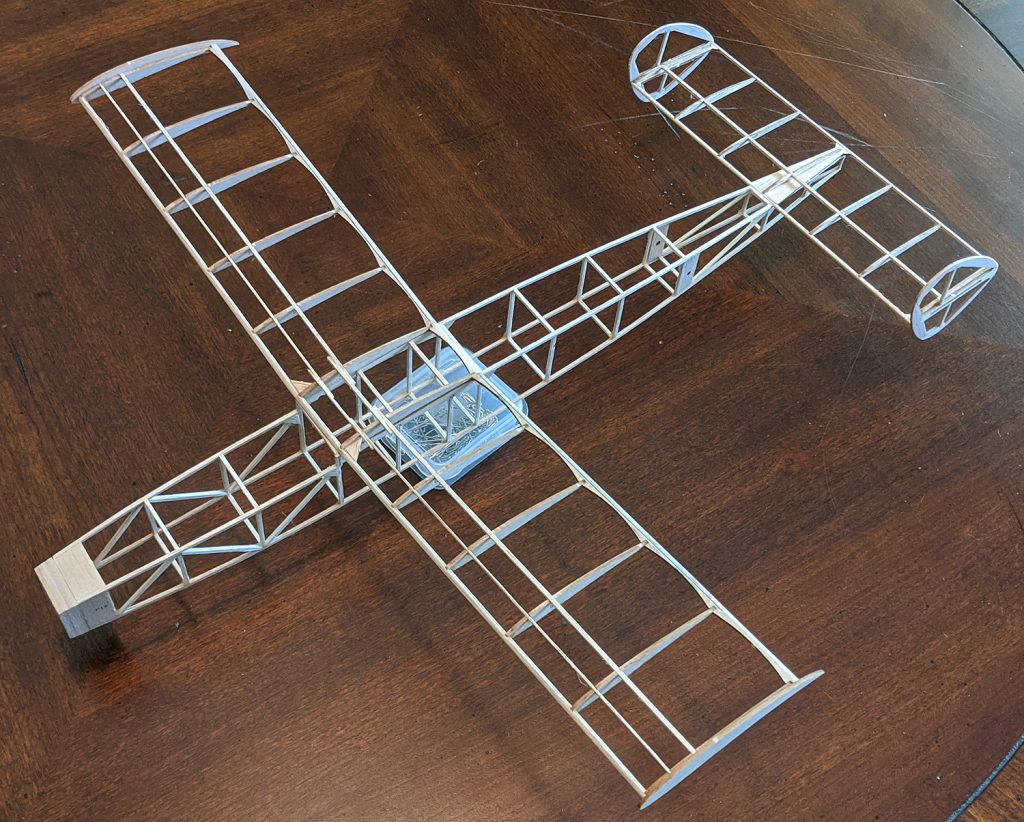 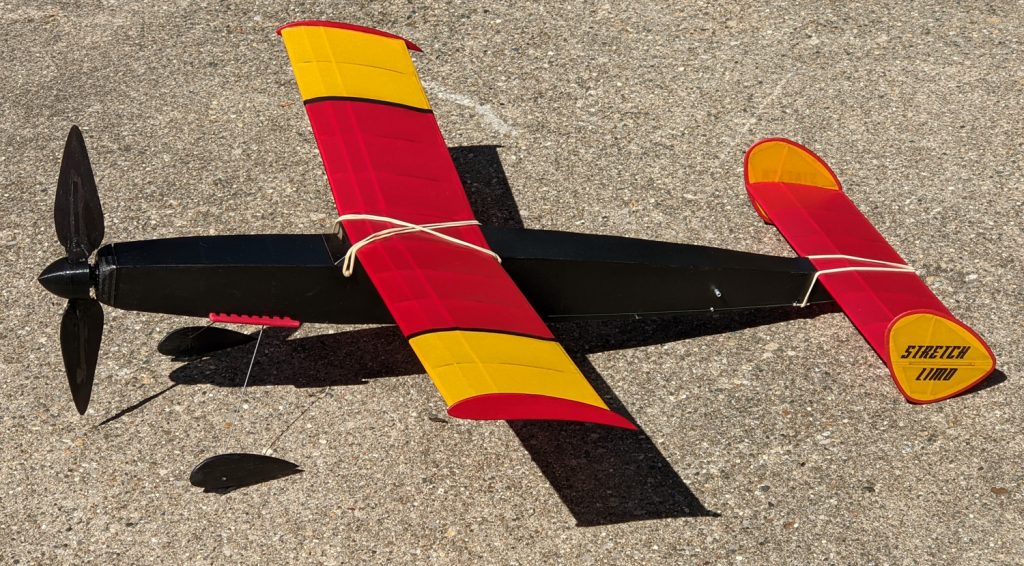 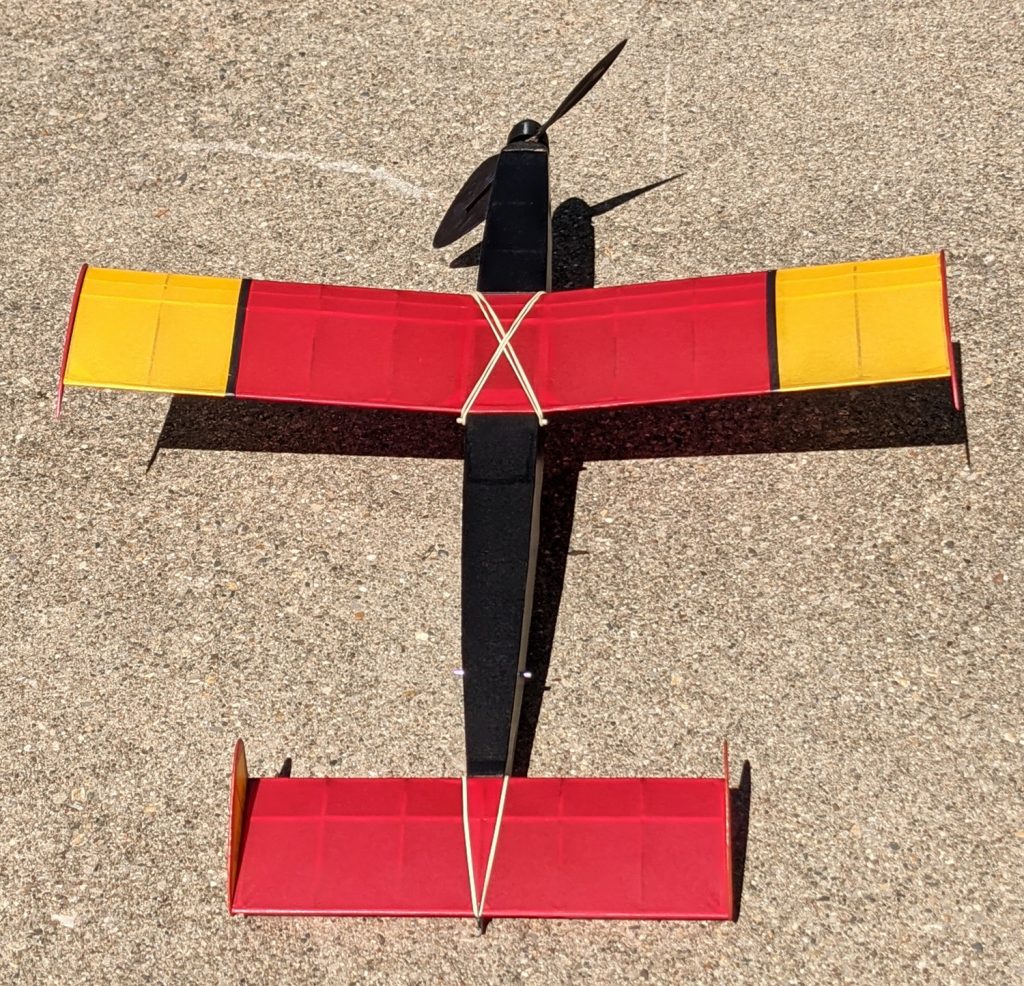 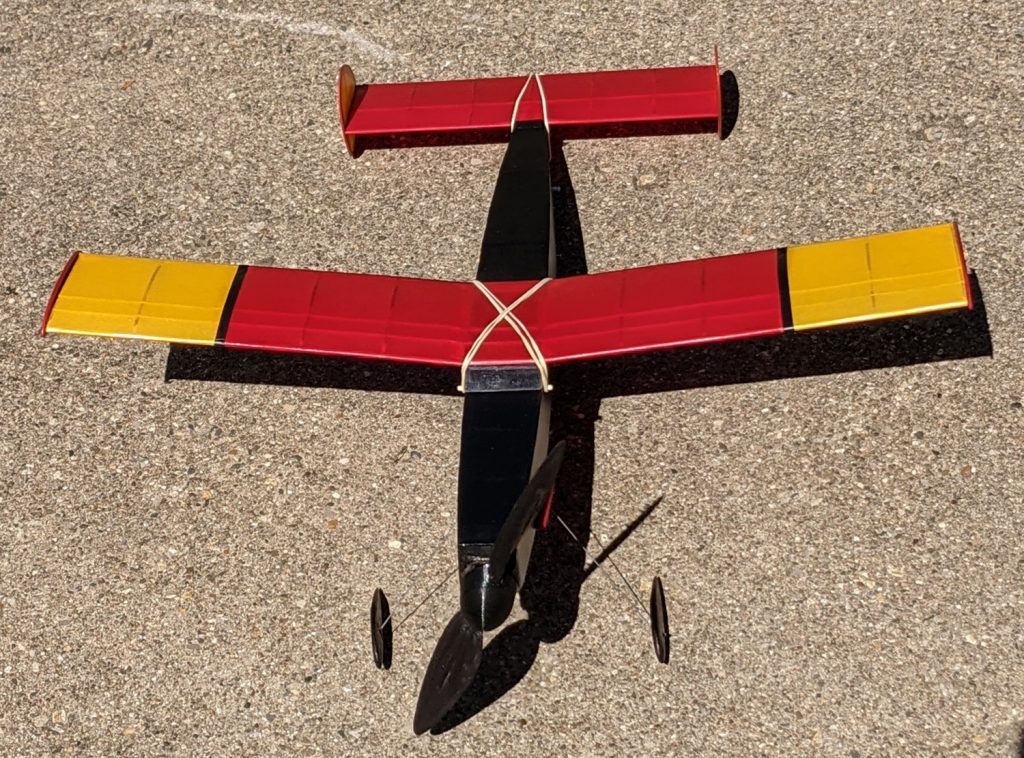 You can find the short kit AT THIS LINK