This is an idea/article that I have had in mind for at least a year.  I just had to build my third JA Special due to #2 flying away.  I’ve seen several of these built and most people have trouble getting it to fly.  I’ve had success with these.  Consider this a heavy Embryo or a 1/2 Wakefield.  If you can get those to max, you can get this plane to max – and it is not hard.

Here are my suggestions, followed by a photo of my latest JA Special, #3.

The Jimmie Allen Special – How I Made it Fly

1.  Build light, using light wood.  The design of this model is over built.  Many contemporary designs of the same relative size, including those from the same company (Denny Industries), are designed for 1/16″ square wood, not 3/32″ square.  However, you need to build as designed, using the same size wood as on the plan.  But, you can use very light wood, even for the longerons.  The only areas where I would recommend harder wood is for the Leading Edge and Trailing Edge.  This will keep the wing straight and strong.  Light wood will be a benefit later on in this process.

2.  Move the wing forward.  Consider that this model is like an Old Time Stick model with wheels.  Consider that the wing can and should be moved fore and aft to locate the balance point.   This usually means the wing is far aft.  This is “ok”, but not optimal, in my opinion.  It makes the Tail Moment Arm short.  That makes the plane sensitive to adjustments and not as stable as it could be.  I have seen many JA Specials with the wing Trailing Edge within about half an inch of the front of the cockpit bay.  The cockpit bay starts at the 4th vertical from the front (not counting the very front of the model).  Even I initially set my Leading Edge at the 2nd vertical – this put the Trailing Edge halfway between the 3rd and 4th vertical.  I changed that and got a very stable flyer by moving the wing forward so the Trailing Edge was at the 3rd vertical.  This is roughly 3/4″ to 1″ more forward than most people fly.  This will require nose weight to balance the model.

2a.  Forget about adding incidence to the wing.  This is unnecessary.  I’ve seen it, but *my* models don’t require it.  I think it is a crutch to get the rear-wing-positioned models to fly.  There is already nearly 3 degrees of incidence in the wing, if you consider/realize the shape of the airfoil.  That’s plenty.

3a. the Propeller.  As with all Old Timers, this model is restricted to propellers no larger than what was on the original plan.  The original plan only shows the profile of the prop blank with a  diameter of 7″.  It doesn’t show any other prop dimensions, but a person can guess that the pitch was relatively low, similar to plastic props today.  I have used a Peck 7″ prop, but got better performance from a Tern Aero 6″ (or the current, nearly identical Czech 6″).  That was, until I tried a wood prop.  I tried to maximize the propeller by using a standard Superior Props 7″ prop.  This comes with a nominal 9″ Pitch (1.3:1 P/D ratio).  This also produces a prop with a fairly wide blade.  This prop did fly the model but induced a dutch roll in the plane.  I read somewhere that “too much prop” could induce a dutch roll, so I made another prop, this time with a narrower blade chord.  This also had a roll, but less than the previous, so I trimmed the diameter.  The current prop, which I am very pleased with, is a 6.375″ Diameter, 9″ Pitch Superior Prop.  This eliminated the roll, but handles the rubber motor well.  The higher P/D ration over plastic reduces “zoom” and provides a more controlled climb-out and longer motor run duration.

3b. the rubber motor.  While I was flying the 6″ plastic prop, I used a long loop of 3/16″ rubber (2 strands).  In my experience, a loop of 3/16″ is about the maximum for a 6″ prop and this combo will fly the JA Special, but is not optimal.  Two loops of 1/8″ (4 strands) seem to overpower the 6″ plastic prop.  However, with the wooden prop mentioned above, the 4 strands of 1/8″ works well.  The only caution is initial torque must be managed during the ROG.  This must be done with the thrust settings:  plenty of down and right thrust will give you a good left turning climb out.  I haven’t tried a right climb on the JA Special.  Of course, the larger motor will mean that there is more weight in the rear of the plane – which must be offset by more nose weight.

3c.  Braid the motor.  This is critical for all planes.  I braided motors for years, but did it wrong.  Braiding needs to be done in the proper direction so the motor remains suspended in the fuselage when the power is off.  This prevents any sort of CG shift because the motor always returns to the same position/location in the fuselage and cannot shift to the front or back.  The thing to watch with a braided motor is that the remaining tension on the motor will pull on the prop shaft and foul some types of freewheelers.  Refer to the next section.

3d.  Freewheeler.  A properly braided motor will pull the prop shaft back.  This could overpower the ramp device on plastic props and the prop will not freewheel and will act as an air brake.  This will cause a spiral right dive from altitude.  You must use some other freewheeling device, even with plastic props, when using a properly braided motor.  There are many types of freewheeling devices.  For the Jimmie Allen Special, you might as well use a clutch design that is heavy, as the plane needs nose weight (see the entire next section).  I have used two types of these heavier freewheelers.  They both attach to the prop shaft and drive the prop.  The prop then is free to float on the shaft after the clutch has disengaged.  One type is positioned between the nose block and the prop and drives the prop with a bail wire that flops out of the way when power is exhausted.  The other is a Superior Props clutch and attaches in front of the prop.  Both of these weigh about 1 gram.

4.  Add Nose weight to balance the forward wing.  As mentioned above, moving the wing forward requires a new balance point for the model.  According to TVo calculations with the wing forward, the model should balance at about 50% of the wing chord.  Set the wing with the Trailing Edge at the 3rd vertical in the fuselage.  Install the motor and nose block as it would be to fly.  Wind the motor and let it unwind to allow the braided motor to place itself.   Support the wing at about 50% – this is about where it should balance for the best flying.

4a. Reinforce the nose area with fill sheet.  Moving the wing forward will require nose weight to get the plane to balance.  Some of this weight might as well be sheeting inside the open bays which will also make the nose stronger.  This will also protect against tissue pokes while handling the nose and installing the motor and prop.

4b.  The rest of the nose weight.  Use clay to balance the plane so it glides well.  I prefer wall-tack (for posters, etc.) since modeling clay can contain oil with stains the tissue.  Clay sticks better and you can take off tiny pieces more easily than wall-tack.  Once the plane is finally balanced, the clay/tack can be weighed and replaced with something like solder.  Solder is denser and takes up less space.  I often use it where permanent weight is needed and just use tack for temporary adjustments.  I glue my solder into the back of the nose block.

4c.  One thing you could do to help with the balance is move the motor peg forward one bay.  This will eliminate some of the bunching that happens in the skinny tail – and – it shifts the cg of the motor forward, helping with overall balance and reducing the amount of nose weight needed.  This will make the plane lighter, maybe by a couple grams.  But it might affect the motor run duration, and therefore, flight duration. Note:  I do not do this.

5.  Secure the nose block.  Small (and heavy) nose blocks such as the one on the JA Special, have a tendency to become loose.  A loose nose block is a bad thing.  It affects the model in so many ways.  A- a loose nose block will not hold a thrust setting.  B- a sloppy nose block will actually wobble spin in the nose, really changing the thrust.  C- a sloppy block will fall out in glide.  This can sometimes smooth the glide – or it can kill it.  D- a sloppy nose block that falls out during flight can and will fall of the rubber and may be lost on the flying field (don’t’ ask me how I know!).  Secure that nose block so that it says in ONE position.  Do this with small magnets, a rubber band, or some other positively secure means.

6.  Install a DT.  All of these improvements to the fly-ability and the glide will cause your model to be more susceptible to fly-aways.  The JA Special can have many types applied to it.  Probably the most common type is the tail pop-up DT.  This may be easily installed on this model, but I wouldn’t recommend it because much of the additional bits that need to be added are added to the tail of the plane, which is already too heavy.  Two other types that can be used are the wing pop-up and the wing pop-off.  Since both work on the wing, the vast majority of extra added weight can be applied very close to the CG point and shouldn’t require additional weight to balance the model, if a little bit of planning is done.  There are two other types that could be used which might actually add less weight to the model:  a weight-drop (where nose weight or landing gear are dropped and attached to the tail via thread) and an air-brake type.  This is usually seen on Hand Launched Gliders and a curved piece of pop can is released and will spoil the aerodynamics of the plane. 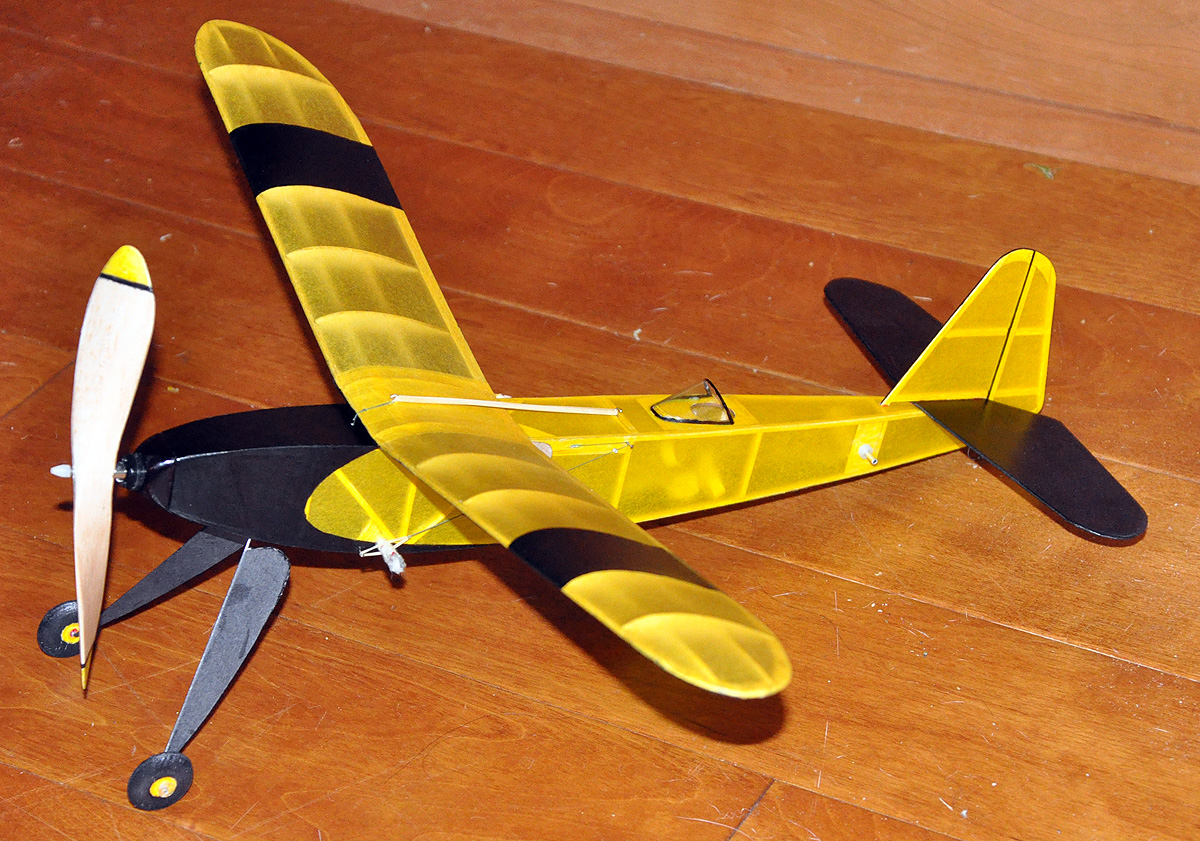