In Peanut modeling, especially for Indoor competition, two airplanes are builders’ favorites:  The Lacey M-10 and the Fike E.  Some see huge wings that help them stay aloft for max flights, others see ugly aircraft.  While going through some of the late Jim Miller’s stacks and stacks of model-building paperwork, I stumbled on some color photos and other documentation for a SECOND Fike E – the Forgotten Fike.  I will call it that because evidence shows that modelers knew about this at one time, but it has fallen out of the modeling world.  I will try to bring it back – here is data on the Fike E “Dream”, built by Rudi Marczi, in Canada, in 1975, registration C-GRSM.

In my opinion, this version of the Fike E is much more pleasing than the original.  The original looks boxy and crude.  This one has had many of the edges smoothed, and the paint job is attractive (although harder to model as a Peanut).

I have three groups of documentation:  third party information, information and photos from Mr Marczi, and photos donated by Greg Thomas.

Third Party Information:  a 3-view from Carlo Godel and a xerox of unknown origin, but possibly from Carlo Godel’s catalog. Note that I have identified a discrepancy on the xerox.  Also, there are some tiny detail errors on the 3-view, when compared to the actual photos. 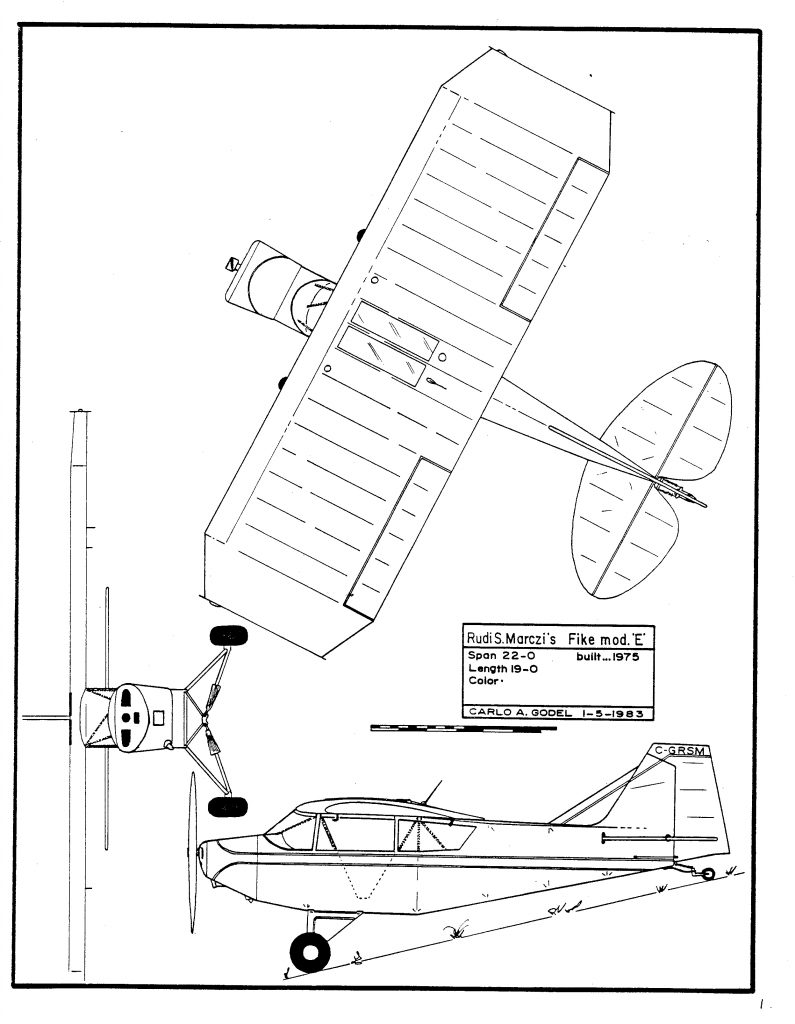 Like most 3-views, there are tiny discrepancies between this drawing and the actual photos. As stated below, I feel the wing tips are the wrong shape, there are details missing in the landing gear area, the door shape is wrong, and the antenna is in the wrong place. 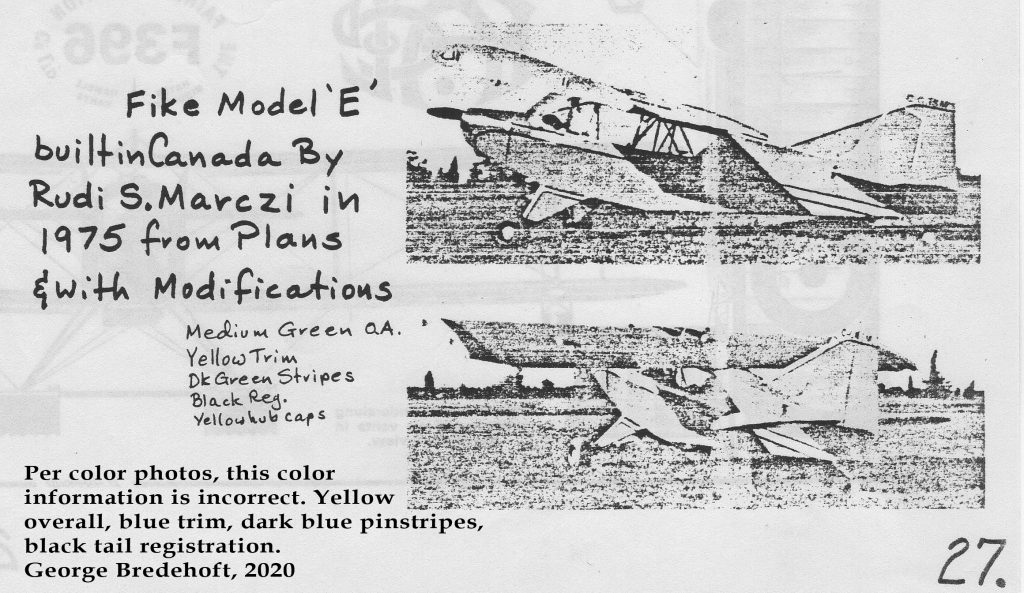 I do not know the origin of this copy. However, the color information is incorrect, when compared to the actual photos. 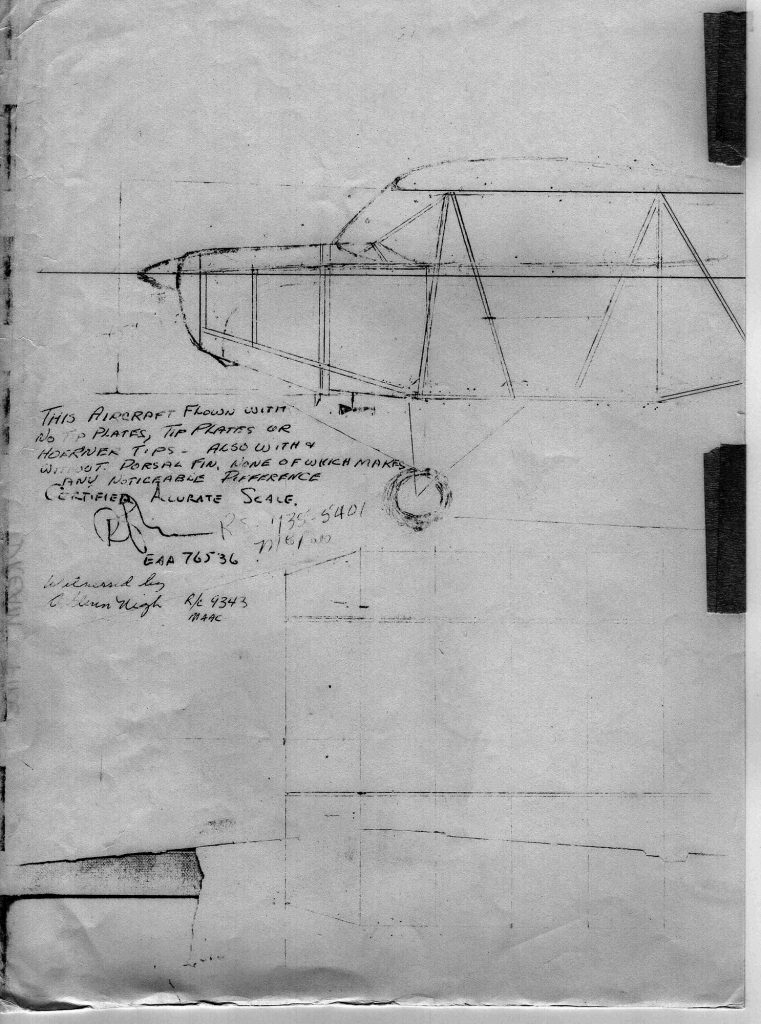 on this sketch are the annotations regarding the tip variations and the dorsal fin. The airplane was flown with a variety of combinations, making any of the options legitimate for modeling. 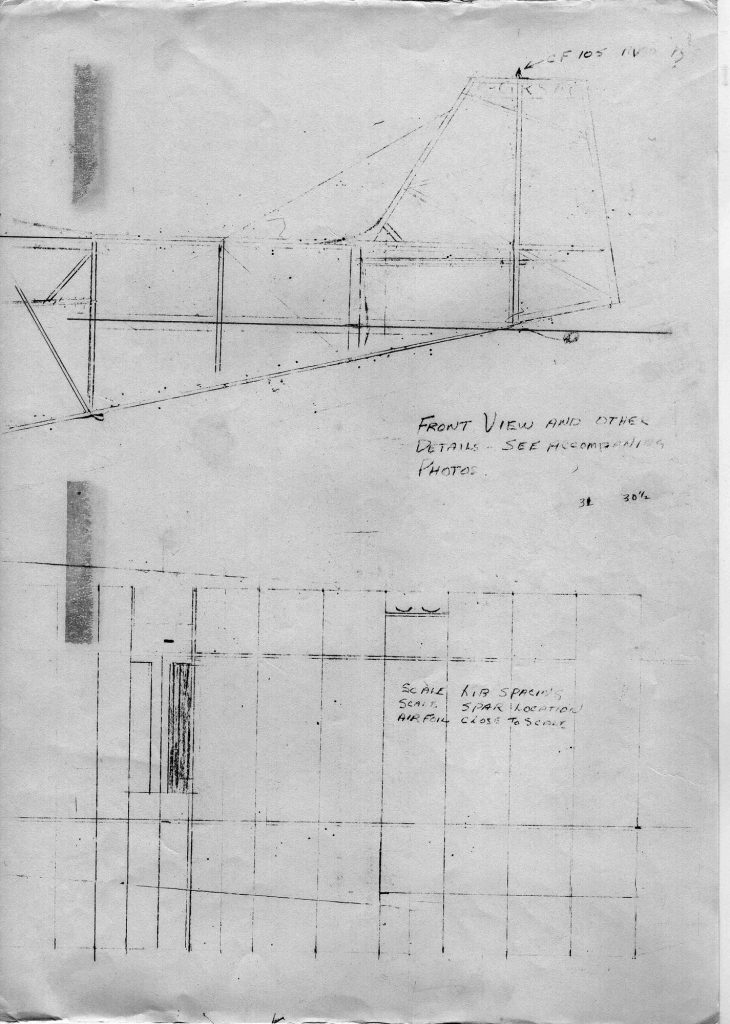 on this sketch is the annotation “…see accompanying photos”. This is why I assume the following five photographs are from Mr Rudi Marczi. 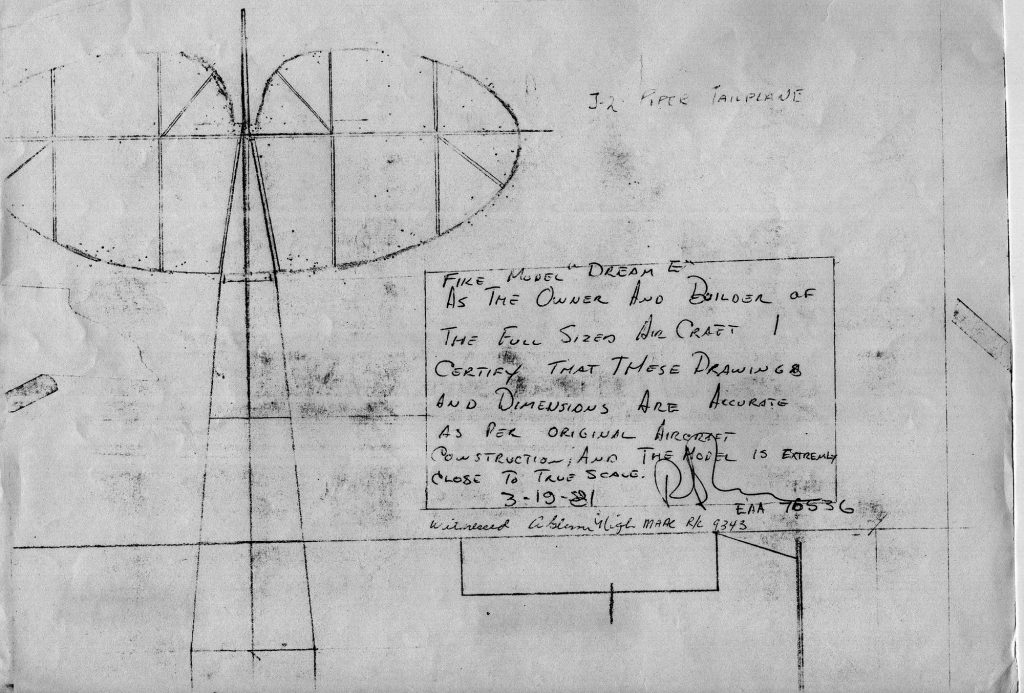 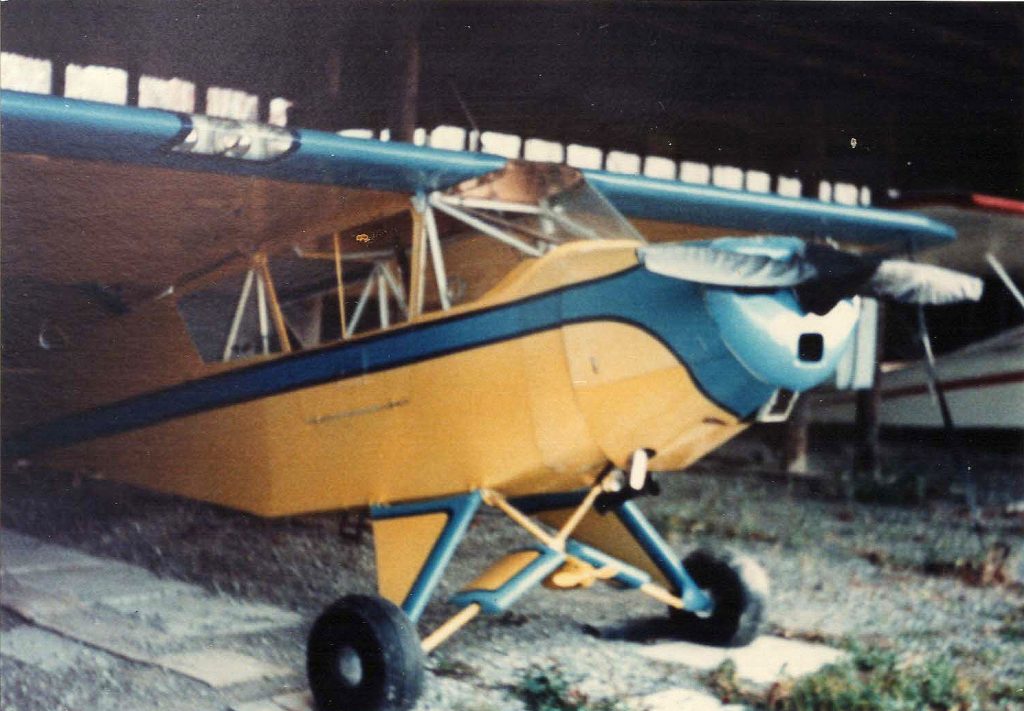 lots of detail here on the nose of the aircraft 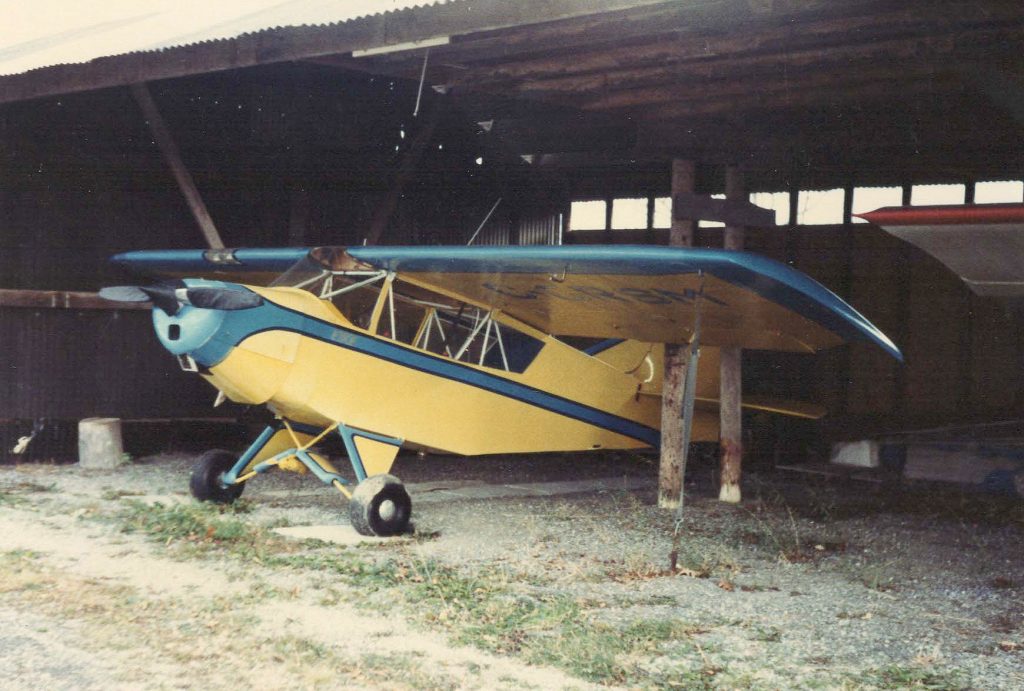 note the pitot tube on the left wing – and a wing tie-down. 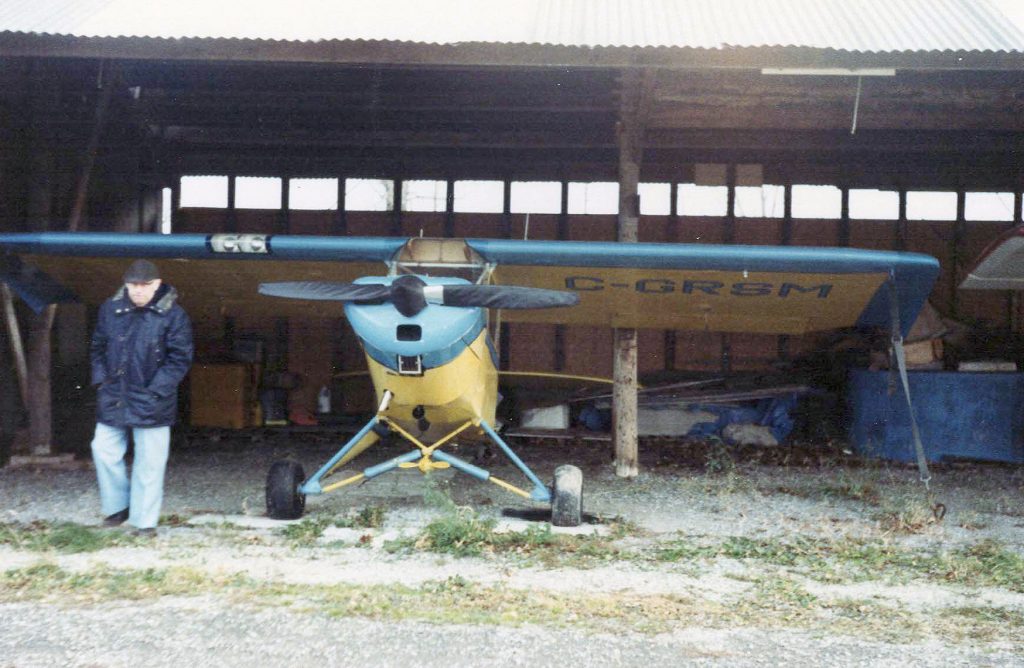 two landing lights within the right wing.  the prop and spinner are covered. 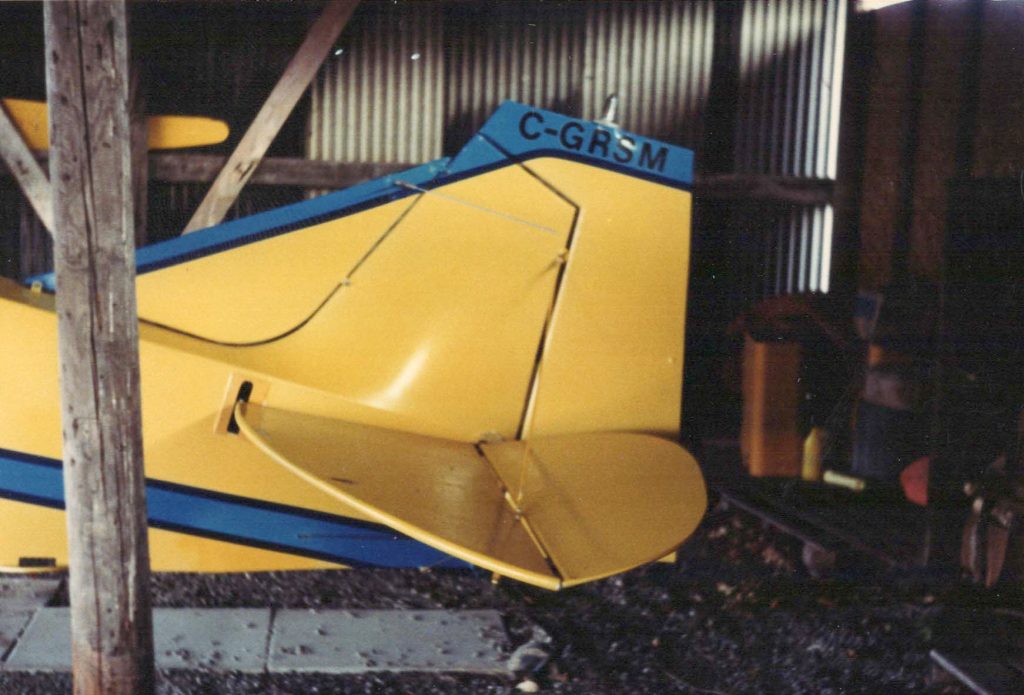 note that the vertical fin (not the dorsal) is covered as part of the fuselage. 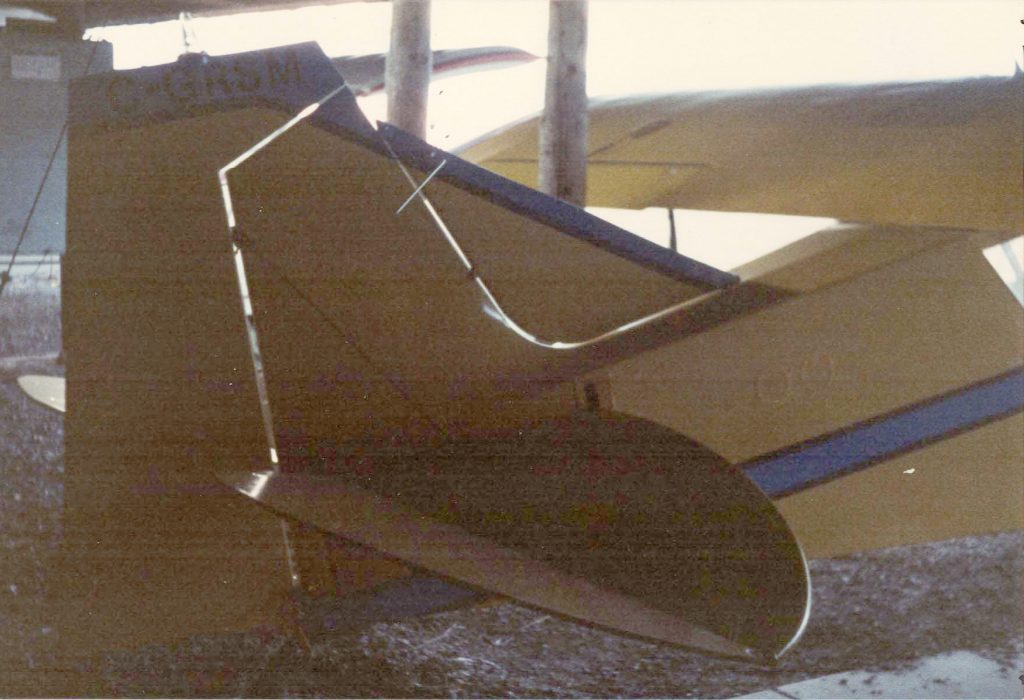 Thirteen photos from Greg Thomas: When I mentioned online that I had the photos (above), Greg offered that he had other photos and he generously offered to share them.  As with most photos, there is more detail here than the average Peanut modeler could use.  But so much is very useful, especially the color documentation.  Note that in all of the photos of the nose, we never see the shape of the air inlets behind the propeller. full details of the landing gear, prop driven generator, exhaust, and other items. This shows the light-blue and dark-blue (not black) pinstripe

this shows the location of the registration number on the wing. also the wood color of the wing area in the cabin

“FIKE” in white on the blue stripe.  And silver spinner and hub caps.

top of wing. NO registration number. Antenna to the side of the windows. Aileron controls. registration is the same as the trim colors – light blue with heavy dark blue outline. top of wing details. note the differences from the Godel 3-view

note the gap at the rear of the cowling. The original Fike E was built from parts of a J-3 Cub – the tail surfaces and the landing gear were J-3 items.  On the original, the horizontal was trimmed to reduce the span to under 8-feet, so the plane could legally be towed on the road.  The “Dream” notes state that a J-2 horizontal was used (and not trimmed).

I drew up my Peanut plans by tracing the Carlo Godel 3-view.  I made no modifications to the shape of the aircraft, neither the fuselage, nor the wing, nor the tail (excepting I increased the size of the horizontal by 10%).  There may be discrepancies discovered when comparing the 3-view to the photographs.

In addition, I designed the wing to meet Peanut specifications: a 13″ maximum wingspan.  The original builder, Mr Marczi, noted on his paperwork that the plane was flown without tip plates, with tip plates, and with Hoerner tips – all changes made no discernible difference in performance.  All photos show Hoerner tips.  Here is where I noticed some differences in the drawings, in the photos, and in my plan.

However, after I did all of this, I looked at the photographs and came to some different conclusions.  1) I do not think the tip taper shown on the Godel 3-view matches the actual aircraft.  I think the Godel end ribs are shorter than the actual, so the angles are less.  2) I think the Hoerner tips are added to the completed wing – attached IN PLACE OF the tip plates – thus increasing the span beyond the original span by a good deal.  Of course, this is logical – the entire wing would not have been rebuilt, but flat plates would have been replaced with the Hoerner tips, extending the wingspan.  For Peanut, this would require re-designing the wing for Hoerner tips and, therefore, reducing the chord, and if the chord is reduced, the fuselage is reduced, also.

No Peanut plan is perfect, and neither is this one. 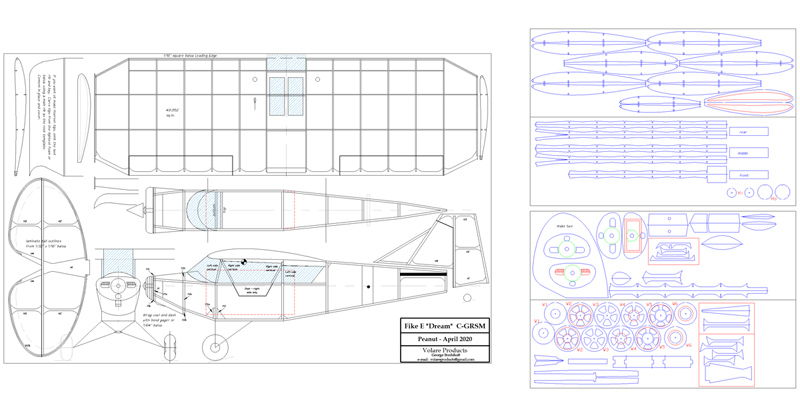 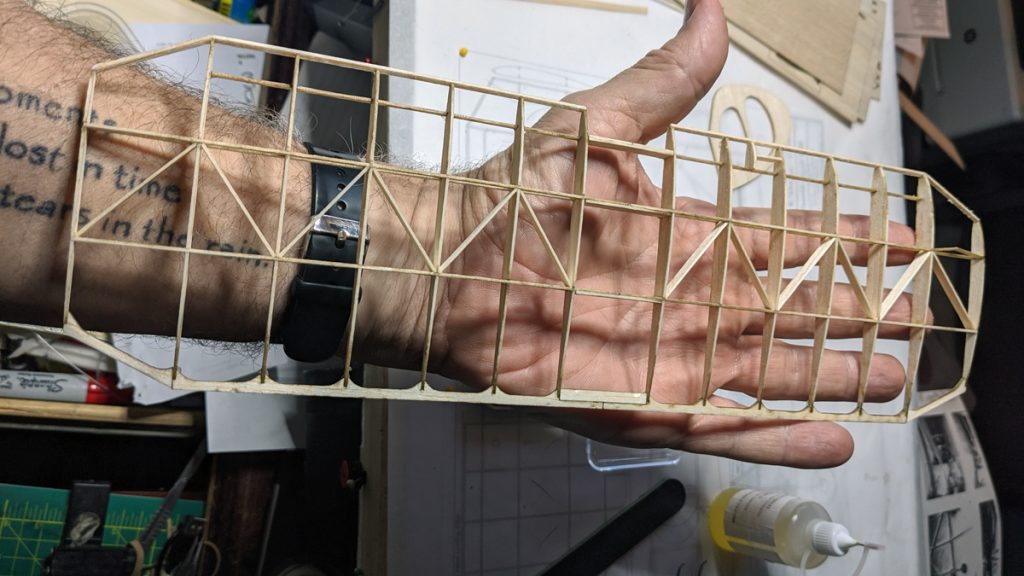