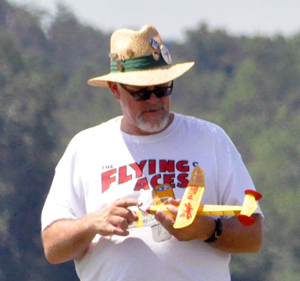 My name is George Bredehoft.  In the mid-1980s (or my mid-20s), I started to become interested in model aviation.  I jumped into radio control and became somewhat proficient at flying a variety of sport planes, never competing in more than the local club’s fun fly.

I would read all of Model Aviation and occasionally pick up copies of Model Airplane News, Radio Control Modeler, Model Builder and Flying Models at the local newsstand.

At some point, whether it was due to cold weather or lack of funds, I started looking closer at Free Flight Rubber models.  About that time, Model Builder was running the “Hey Kid…” series and I learned a lot – and started building several of the MB centerfold plans, along with some beginner Guillow’s kits.

I was hooked.  I discovered that there was an active Free Flight club about two hours away in Cleveland.  I drove up there with some of my beginner models and met the likes of Russ Brown, Gordon Roberts, Mike Zand, Del Balunek, and the rest of the Cleveland Free Flight Society.  With their encouragement and guidance I became a better builder and flyer and joined the Flying Aces Club.  I became a regular at their events and started designing my own planes.

In the mid-90s, I created “Volaré Products” and started selling my plans.  My business model was to only offer plans that had been built and flown successfully to the FAC official minimum flight time of 20 seconds.

Soon, we moved from central Ohio to southwest Michigan, due to a job transfer.  I connected with the Detroit Cloudbusters and started flying with them.  Again, the “local” events were two hours away.  I had met Stu Weckerly, Dave Livesay and Paul Boyanowski when they ventured down to to the Cleveland events.

Around the turn of the century, life events changed and I took a break from modeling.  This break turned into a 12-year break.  In late 2011, I discovered (via the internet) that people were still talking about and looking for my plans.  This was a surprise.  I tossed up a web site and sold a few plans.  I started monitoring a few free flight forums and decided to get back into modeling.

During the winter of 2011-12, I learned that flying friends from Ohio, Carole and Dan Kane, were closing their internet free-flight supplies business.  With a good deal of support and encouragement from my wife, Pat, we decided to purchase the business from the Kanes and we took over Shorty’s Basement on April 1st, 2012.

The spring and summer and fall of 2012 were spent learning the business, filling customer orders and going to as many FAC contests as I could get to.  I reconnected with many old flying buddies and made many new flying friends.

It is our goal, our mission, to provide the best free flight products at the best prices.  If there is something that you are looking for, give me a call – I will see if I can find it.

2 Responses to About Me