(note – there is “some” modeling content below, but mostly this is a reflection)

Well, that’s over.  About 2pm local time yesterday, this popped out. 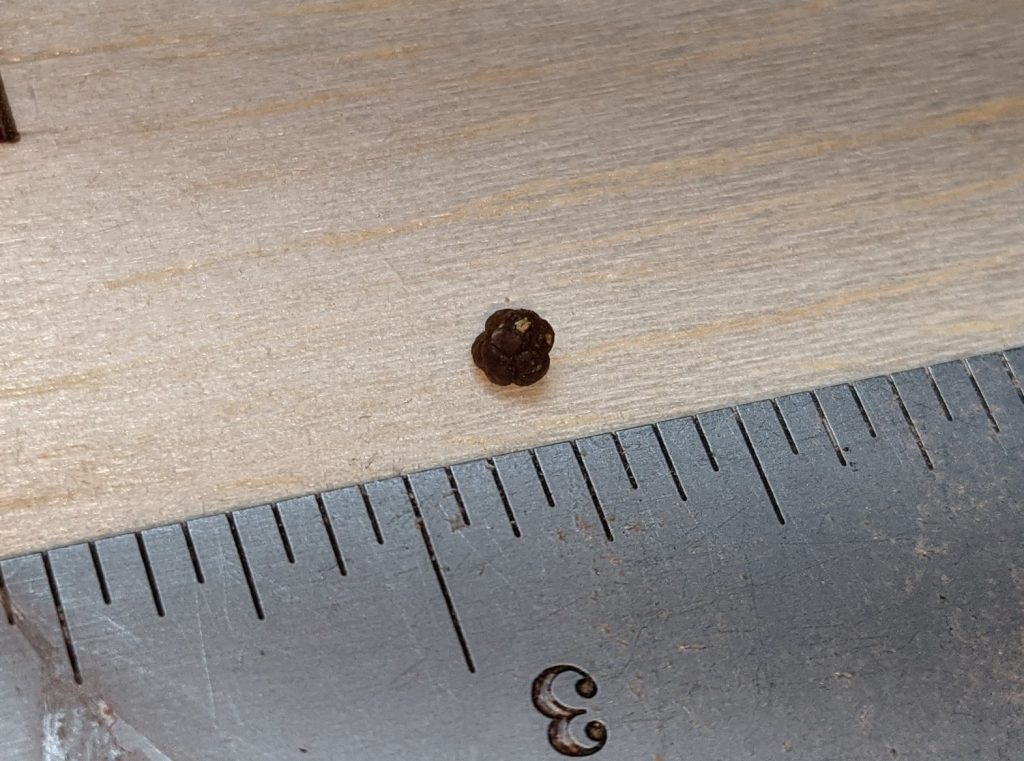 predicted to be 2mm, this looks a bit larger, maybe 3mm!

It is a distinctly different shape that #1, which is interesting in a scientific sort of way.  #1 looked like a flake of crystaline stone, like quartz.  #2 looks like a grape-cluster-like mineral deposit.  I now have a “collection”.

Oh, for those of you that haven’t had a kidney stone and are worried that you might get one, I will tell you this as a veteran of two:  the pain is unimaginable – it will lay you down.  BUT – once the stone gets to your bladder, it is easy and virtually painless.  Don’t worry about that last “little” length of travel coming out of the bladder, it’s literally nothing.  It is nothing more than “uh, I gotta pee again…ploop…oh, there it is”.

Now I have to rid my body of these narcotics.  I was given NORCO (Hydrocodone) for pain and FLOMAX for easing urinary tract restrictions.  I went as light as I could on both of them.  The NORCO was great for masking the continual baseline pain while that stone was moving around – baseline having been estimated anywhere from 3 to 5 out of 10 – but it didn’t do much for the peaks and surges that went up to about 8.  As the FLOMAX was indicated to be taken “after a meal”, I only took a couple of those over the several days because I had absolutely no urge to eat anything.  I won’t go into any greater detail on this, but people that have had kidney stones know exactly how bad all this feels.

The point is – these narcotics are not kid’s stuff.  Both of them knock you out.  The make you feel hazy and heavy and catching up on missed sleep is the best thing to come out of them.  And their effects are long lasting.  The NORCO was indicated for every 6 hours, but even after you stop, it’s at least a day before you stop feeling the drag associated with the drug.  I absolutely do not understand the attraction to these – you can be conscious while taking them, but the feeling is not exciting.

Fifteen years ago, when I had stone #1 – and as a result, had my gall bladder (and stones) removed and after my knee surgery – I was given bottles of oxycodone and vicodin.  That was before they realized what a social danger they were.  Again, I didn’t understand why people wanted them – they did nothing good for me.  This time I was given very limited pill counts and warned not to share them and told there are places to turn in excess for disposal.  I will be disposing of what I have left.

Anyway, I still have pangs of kidney pain – very short “zings” and a general low-grade ache.  I assume that is just recovery from the damage done as that mulberry traveled through my body.  It has been 24 hours since my last FLOMAX and I still feel a bit woozy from that.  I gotta get this crap outta my body.

Tonight, it will be a full week since all this started.  That week was 100% downtime from all forms of modeling – personal and business.  I did pack up the easy-to-pack T-shirt orders yesterday and will get to some more this morning before the Post Office shows up for pick-up.  But, essentially, all orders have been delayed.  The only thing I did do was print out order sheets.  It’s time to fire the laser and 3D printer back up and get back into production.

There was to have been a delay anyway – I was scheduled to go back to Ohio to my dad’s this week (Wed-Sat) to work on our Studebakers.  Our plan was to have his re-assembled this week.  Obviously, that didn’t happen.  I’ll need to reschedule that, but now there is a time-crunch.  In addition to scheduled contests in May, I now have a couple of doctor appointments mixed in.  Finding four days to be away is more complicated.  It will happen, though – I need to pick up a trophy we did (and he built) that will be presented at the June 5th & 6th McCook Contest in Muncie.

My OT Stick model needs finished.  I need to paint the wing tips, finish the tail and DT, and finish up the prop assembly.  I am very excited to get this thing finished.  It is a beautiful model and I have high expectations for it.  It has been taunting me throughout this week – It has been sitting on my building board, on my desk – which is in the same room as the couch and tv where I have been spending most of my time.  It has been sitting there in silence sending mental messages into my addled brain – “George…finish me…let’s go flying!”

Anyway, I am on the road to recovery (why am I hearing Todd Rundgren’s “Road to Utopia”?).  And I will be at the Cloudbusters’ Indoor Fling on the 16th a week from this Sunday.  I was worried about that.  Then the Sunday after that is the Cloudbusters’ Monthly Outdoor contest at Alkay Field.  Two weeks after that is the first big-field contest for me/us – the McCook contest at Muncie.  I’m ready (mentally).  I should be ready physically.  I hope to see you there.

As the old joke goes “the coffee break is over; back on your heads!”

3 Responses to The Passing of…a Stone