Coloring Our Models – What Colors are Right?

Two and a half years ago, I built a Peanut Barracuda.  I’ve written about it before, including its demise, when it was crushed by a passing dust devil.  This past winter, I built another fuselage and tail and got it ready for the indoor season (which has just ended).

I struggled to get it to fly all winter – until the last contest when I won three rounds of WW-II Combat.  The plane got damaged and repaired.  Successful flying was a critical part of my process to be able to create short kits and sell them.  Now it has flown and I will have the kit available shortly.  But I ran into a problem…

Part of my offering will be free downloadable tissue print templates.  As I checked my files to make sure I had them ready to upload for others to use, I decided to check what the Fleet Air Arm (FAA) colors were.  Here is where the story gets complicated.

Here is the plane I modeled.

Here is another color 3-view (found on Pinterest)  (note that there are differences between these two images). 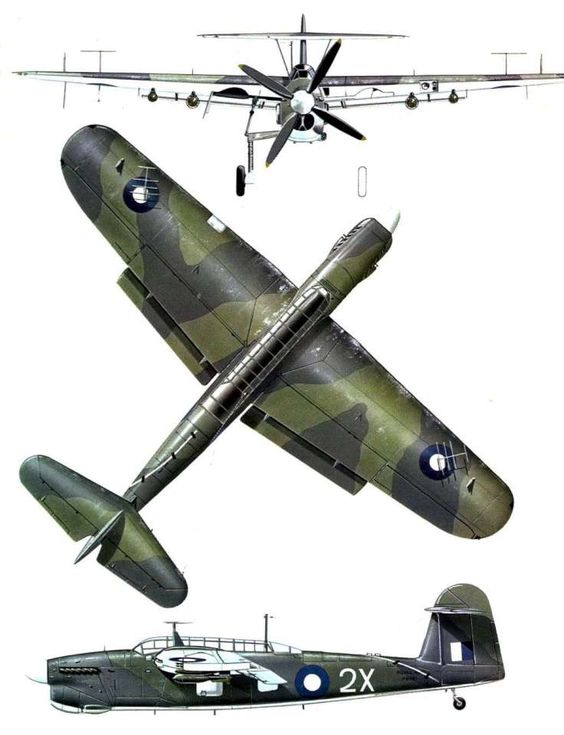 This color 3-view is found in the Aircraft Profile #240 Fairey Barracuda.  I am sure that I used the image out of that book to “eyedrop” select the colors to create the tissue prints for my model. Both of these images are artist’s interpretations and not photographs. 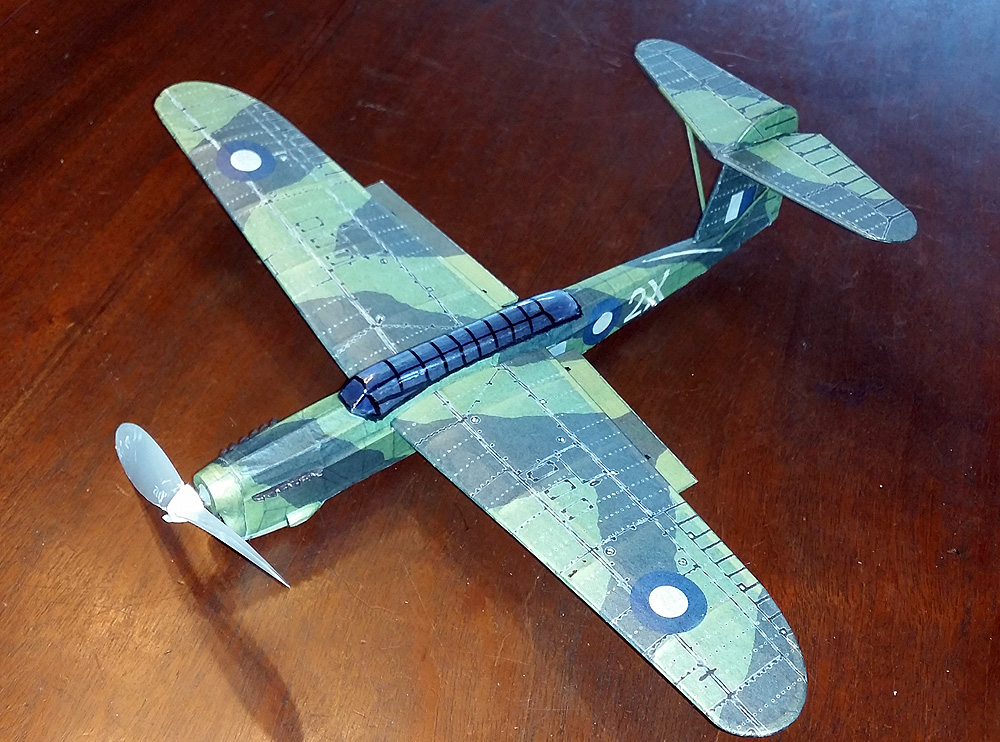 And here is a small preview of the fuselage side from that effort.  The colors look slightly different because of two reasons:  a) the photo above is a photo of the printed tissue and b) the printed tissue does not come out exactly as the computer monitor shows it, especially inkjet. 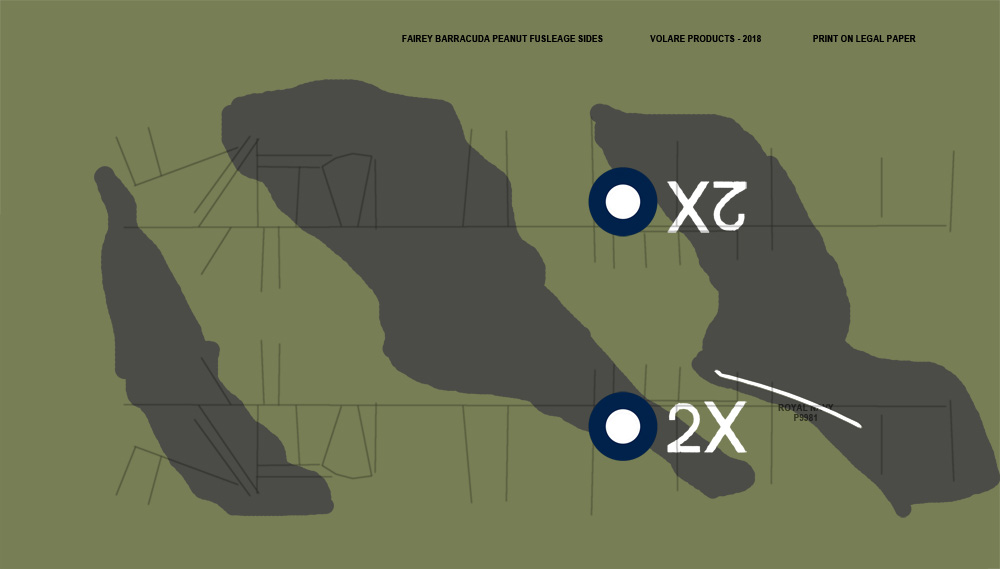 Even though they are artist’s renderings, we would assume the artist is using real colors to create the images.  And maybe they were, either to the best of their ability, or the colors have changed over time and internet space.

So, I searched the web this morning to verify the colors.  This aircraft flew in 1944, so we have to look for the Fleet Air Arm colors post-1941 – There was a change in 1941, so early camouflage colors and layouts would be incorrect.

Several internet sources tell me these later colors were as follows:

There are a few sites online that show the FS colors (FS stands for Federal Specification), but graphics programs do not recognize the FS color codes, so you need to find some document that “translates” the colors into Hex, RGB, CMYK or something that your graphics program recognizes.

I found a document online that has this in a single place and these colors seem to match – or are at least consistent.  I found some places that called out translations that just did not even match the colors the showed.  Here is the URL for this useful document:  https://www.spmodelismo.com.br/material/tintas/fs595b.pdf  It should be noted that document FS595 would be the original, WWII-era document.  FS595a and FS595b were revisions.  The current is FS595c, but I read there is a problem with the -c version in that it changed some of the color identifications and these new clarifications can lead to confusion.  That is likely why the person that developed this PDF chose to work off the FS595b version.

And here is my reworked colorings (followed again by the first rendering for side-by-side comparison): 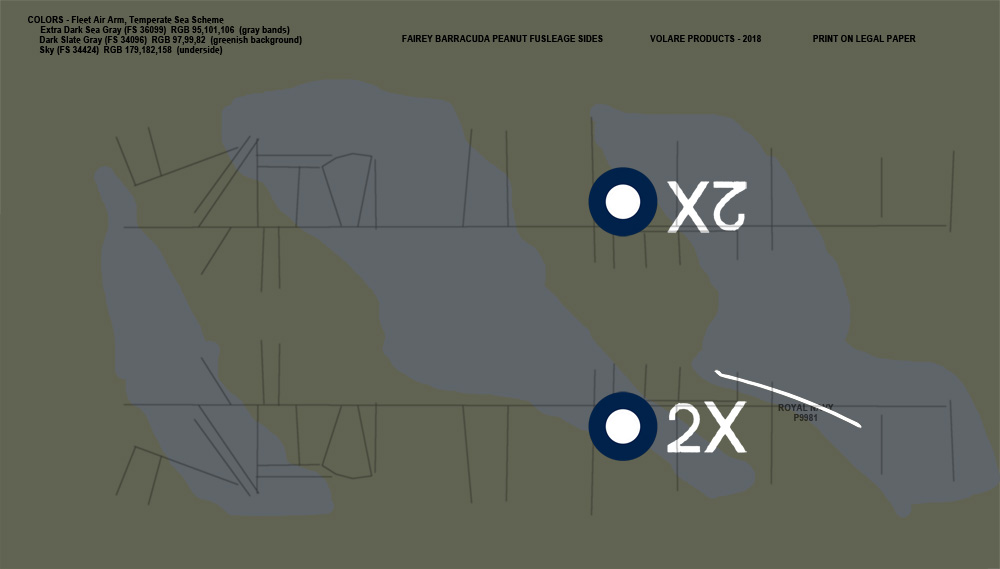 If you look at color photos, you will see the NEW color palate is much closer to the photos than the second.  I will rework my tissue templates to reflect these new colors.  Too bad my model is now the wrong colors!