The Mauboussin Hemiptere is one of those models that has a history of being one of the “popular” Dimers.  As a tandem wing, it has a large amount of wing area for a dimer – maybe that’s why it is popular.  Don DeLoach recently built one and suggested that I kit Al Backstrom’s version, saying his flies very well.  I re-drew the plan and it was published in the Sept/Oct 2020 issue of the Free Flight Digest.  I sent out a couple of prototype kits and here’s a write-up (and photos) by Oliver Sand.  Here’s what he had to say about the build and such:

Bones: Frame was built with laser-cut parts and medium-weight 1/16” balsa throughout.  I coated the nose plug with medium CA and sanded to prevent wear, and used 1/32” balsa for the cockpit. 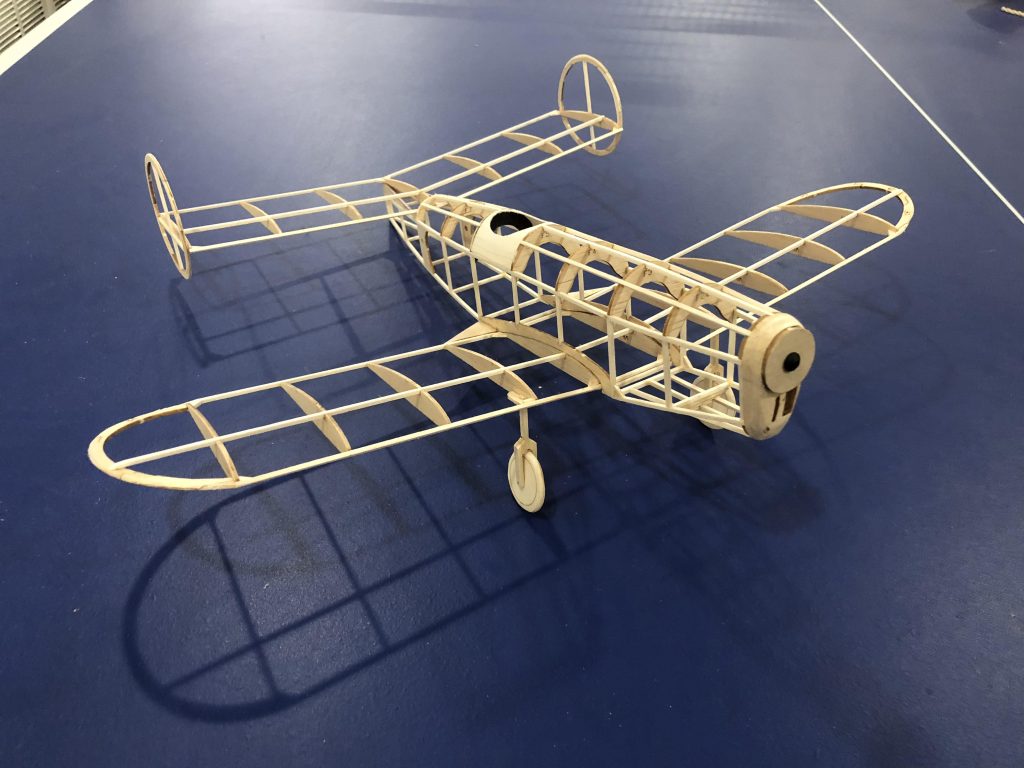 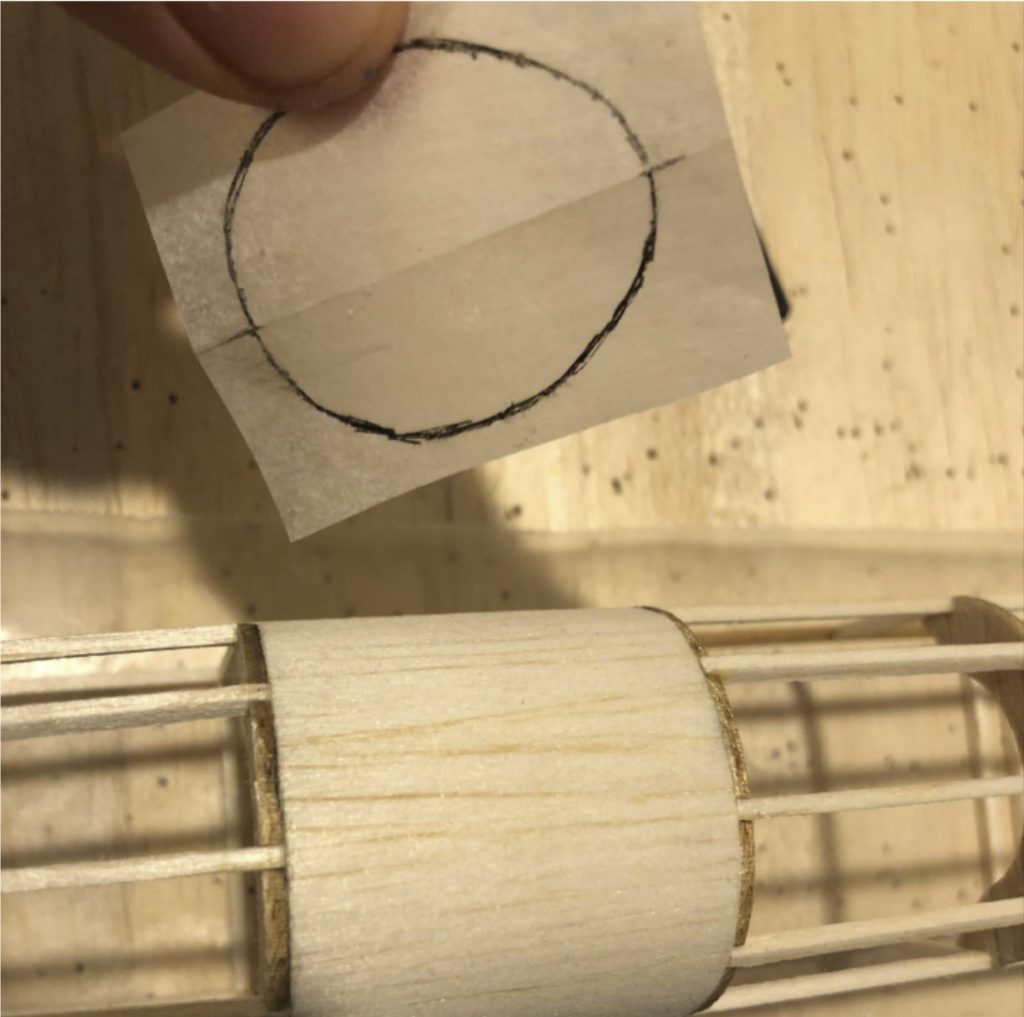 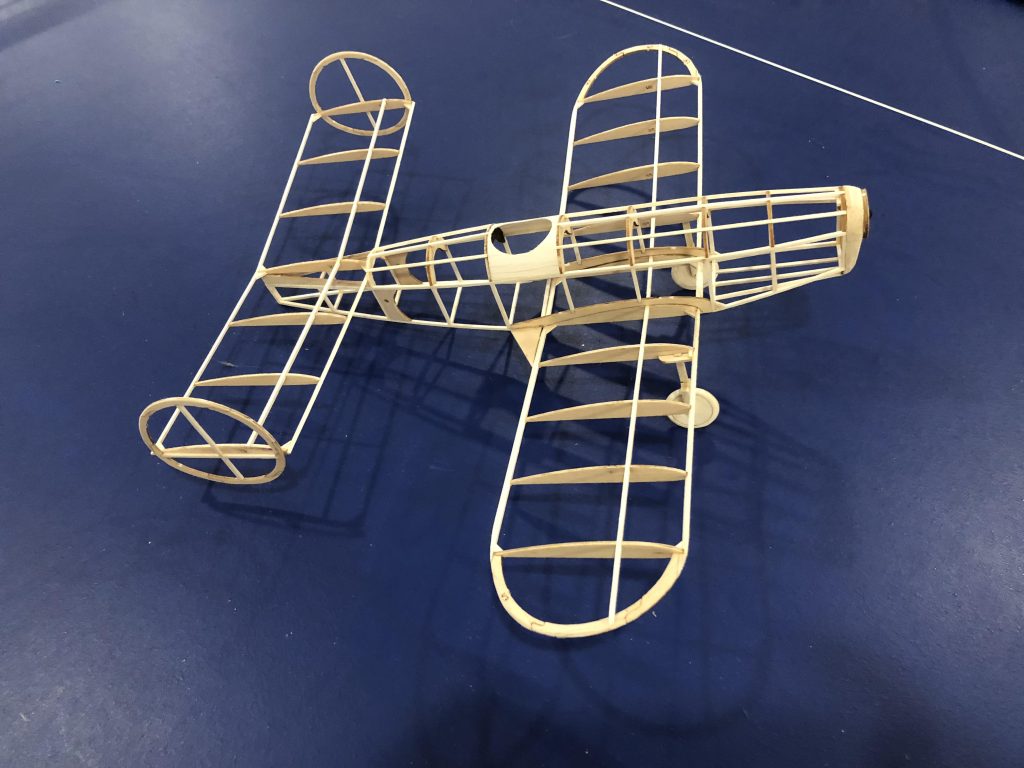 Covering and Markings: Because I got to the covering stage during a cold NYC winter, spraypaint wasn’t really an option. So, I did a lot of experimenting with different kinds of ink and paint markers. The Faber-Castell ink ended up being the easiest to use and run-proof, and lettering is all done with a black MUJI pen (also waterproof). All tissue was pre-shrunk Esaki-style from an old SIG kit, chalked on the dull side with white Pan Pastel and covered shiny side out with a purple Staples glue stick; wings and fuse were shrunk again with water after covering, and I kept the rudders flat between sheets of wax paper and under a book for several days to prevent warps. 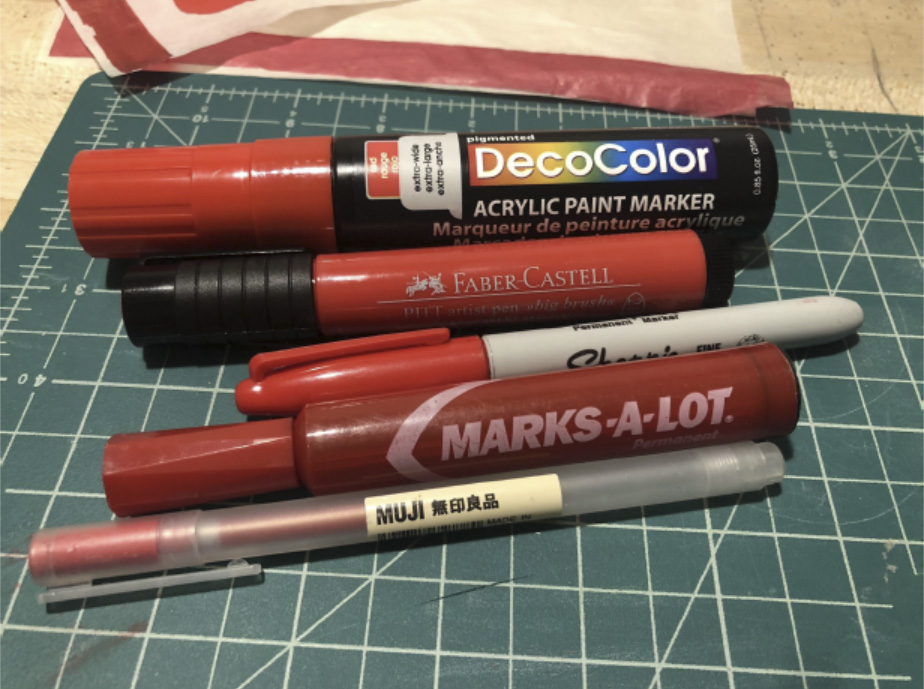 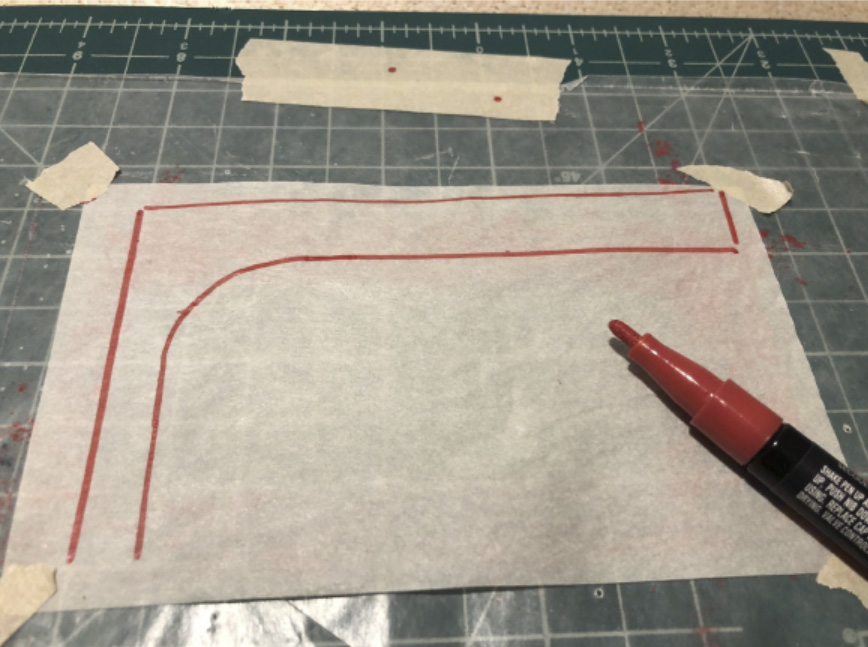 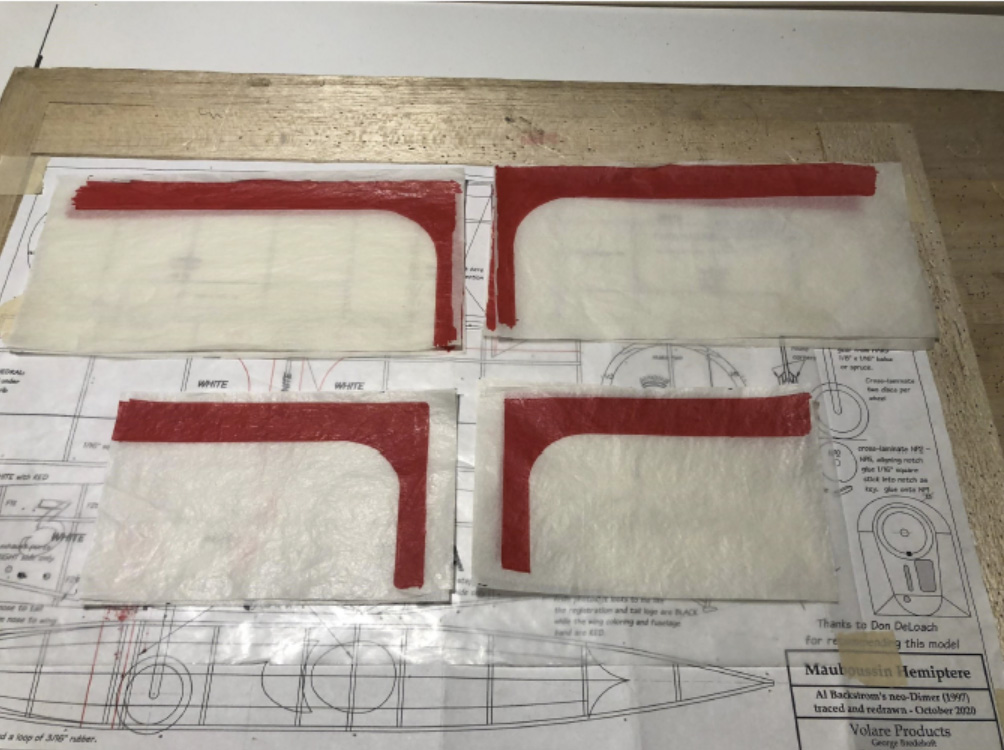 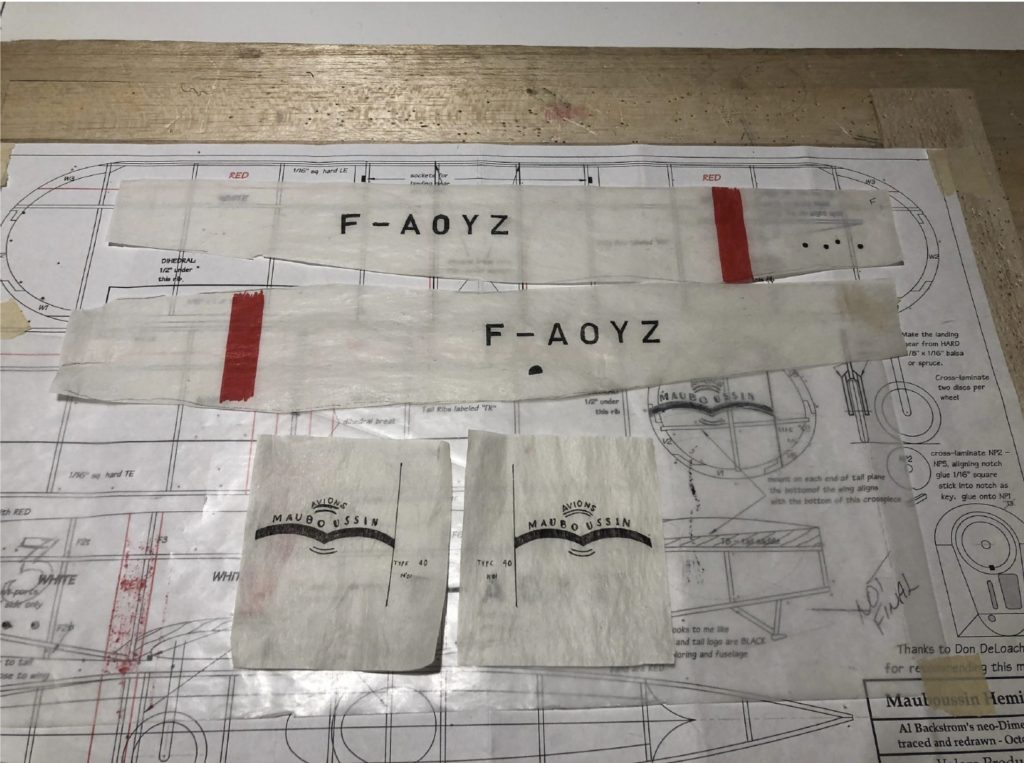 Landing Gear: A small modification I made to the plan was attaching the LG to the wing with 1/16” OD clear monofilament line for some flex on landing (thanks Tom Hallman for idea). This monofilament goes into a small ?” balsa block flush with the wing rib bottom, and is attached with CA on both ends. Not shown in photos but later bound with thread to LG strut. Axles are small lengths of 1/32” music wire. 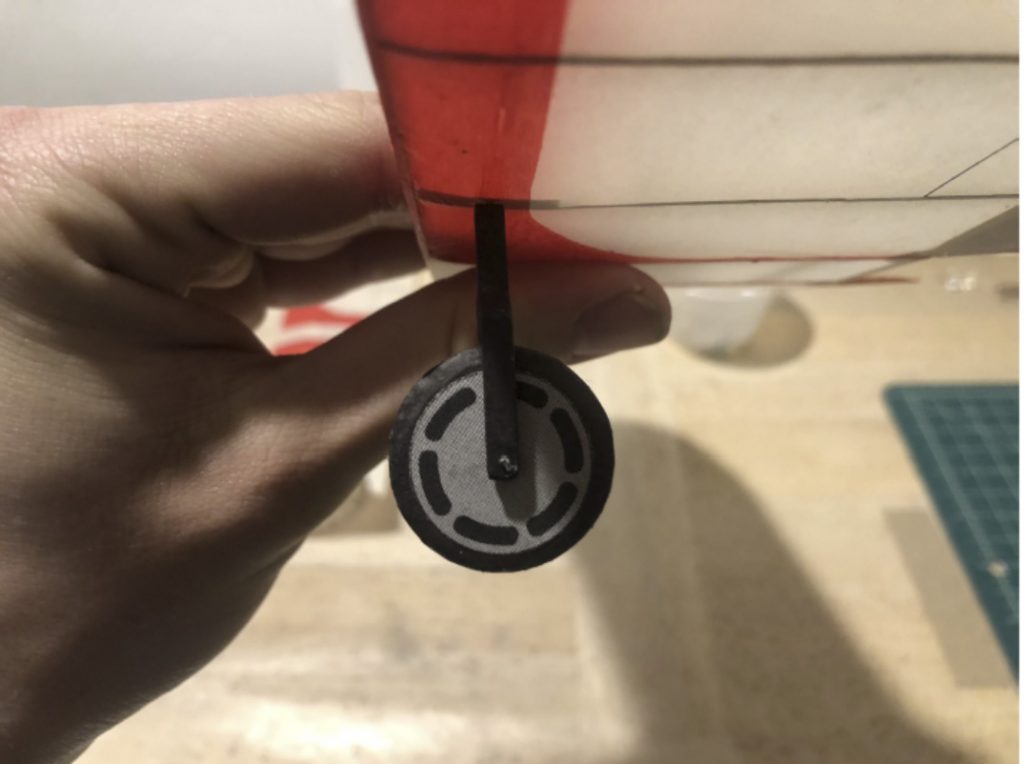 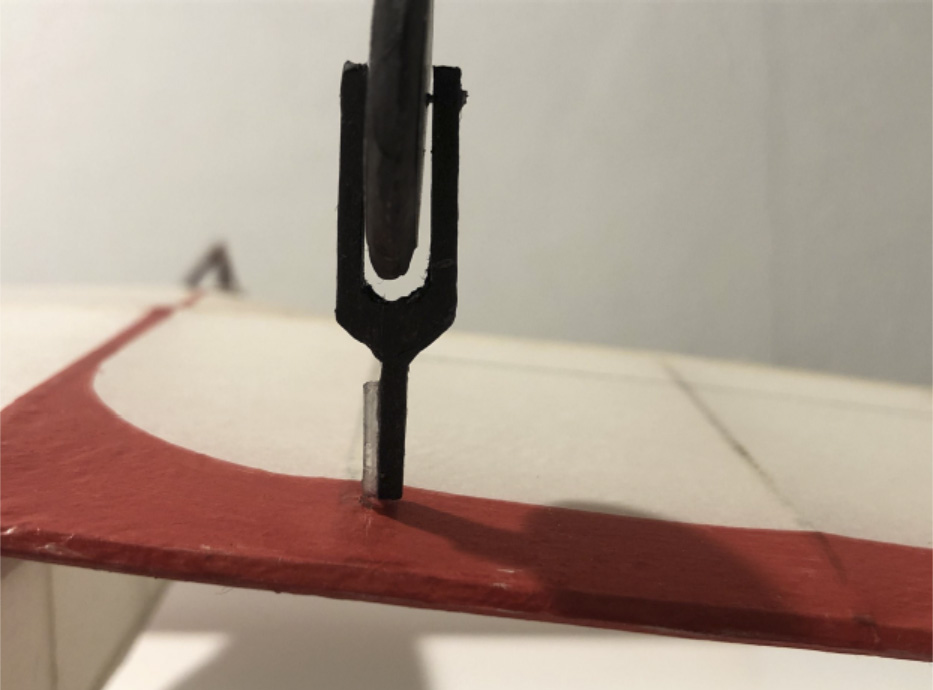 Tail Skid: was built with extremely hard 1/16” square balsa, covered in brown Sharpie and double-glued with Duco.  Rear wing: is secured to back of fuselage to be adjustable and removable with hook on back of fuse, dental band, and threads hooking over motor peg. 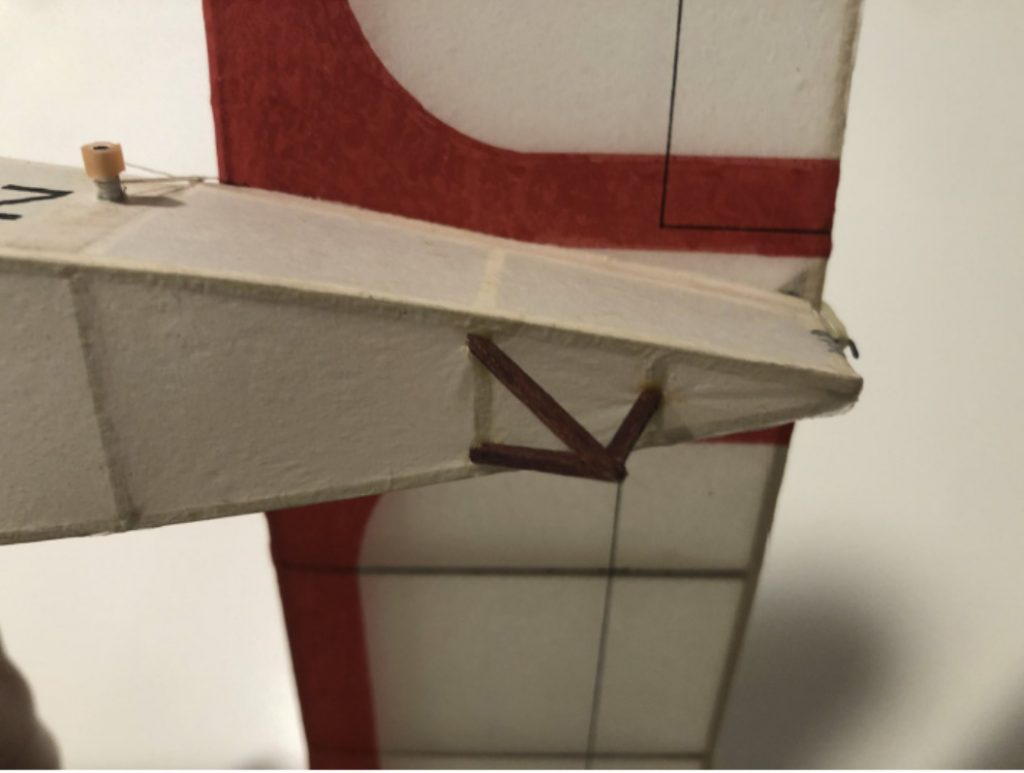 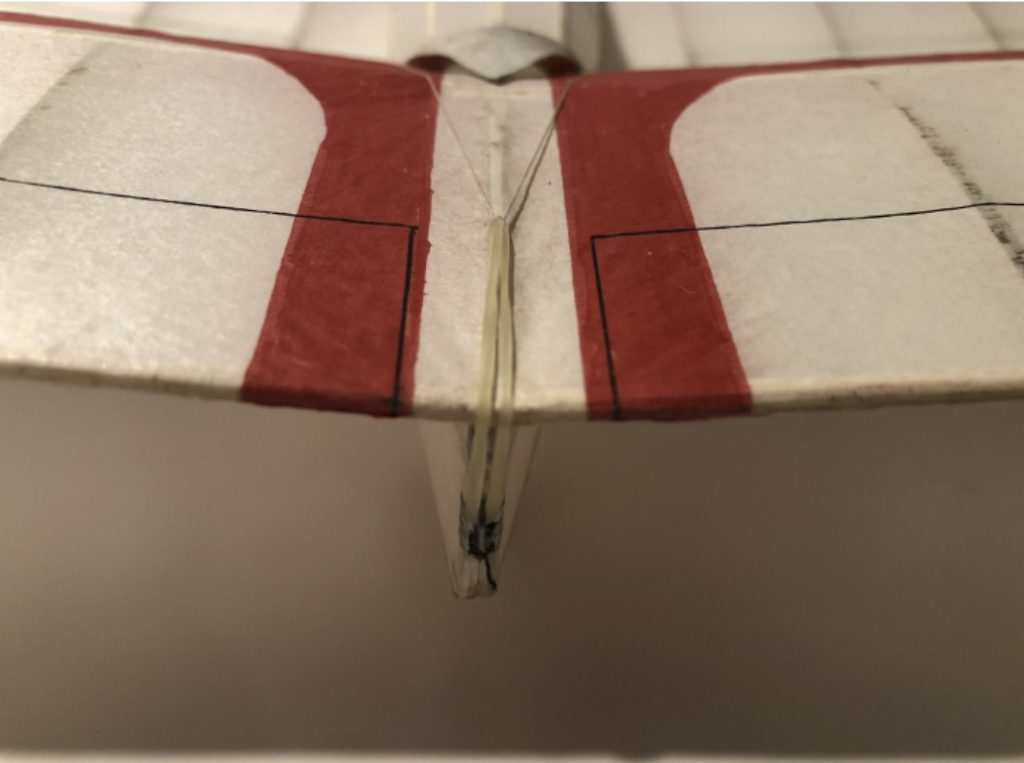 Magnets and Prop Shaft: Wing is held onto fuse with 2 pairs of small neodymium magnets as shown. I used a 7” Peck propeller for the front, drilled out to spin free over a 1/16” brass tube, with a Z-clutch and 0.047 reverse S-hook shaft. Hopefully will stay bend-free a bit longer than a 1/32” shaft would. 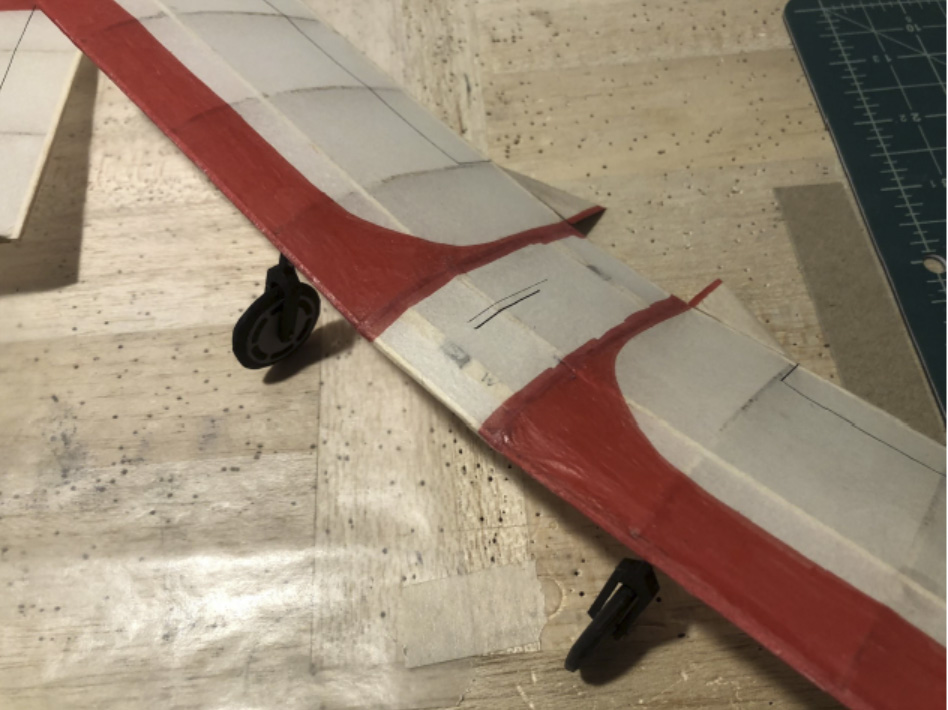 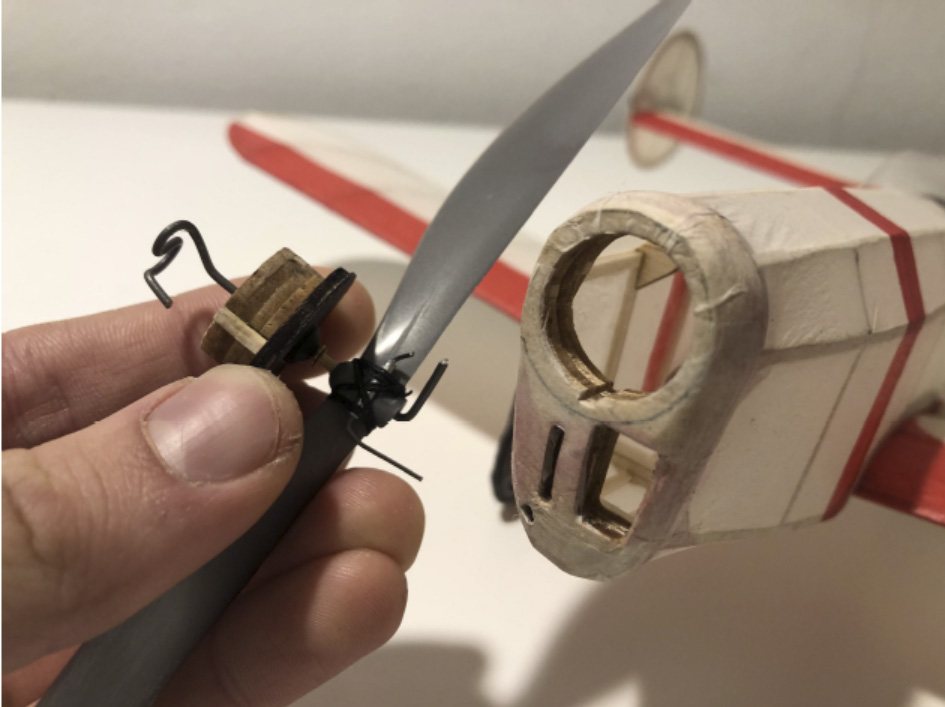 Finished and assembled: all surfaces sprayed with 2 light coats of Krylon, and windshield is .002 acetate curled over a pencil and attached with Sobo fabric glue. Final empty weight is 14 grams and CG is 60% back on front wing as of April 2021. Very promising maiden flights with a 30” loop of 3/16” rubber, incidence as on plan, and just about a degree of down and right thrust, and more trimming is still needed. 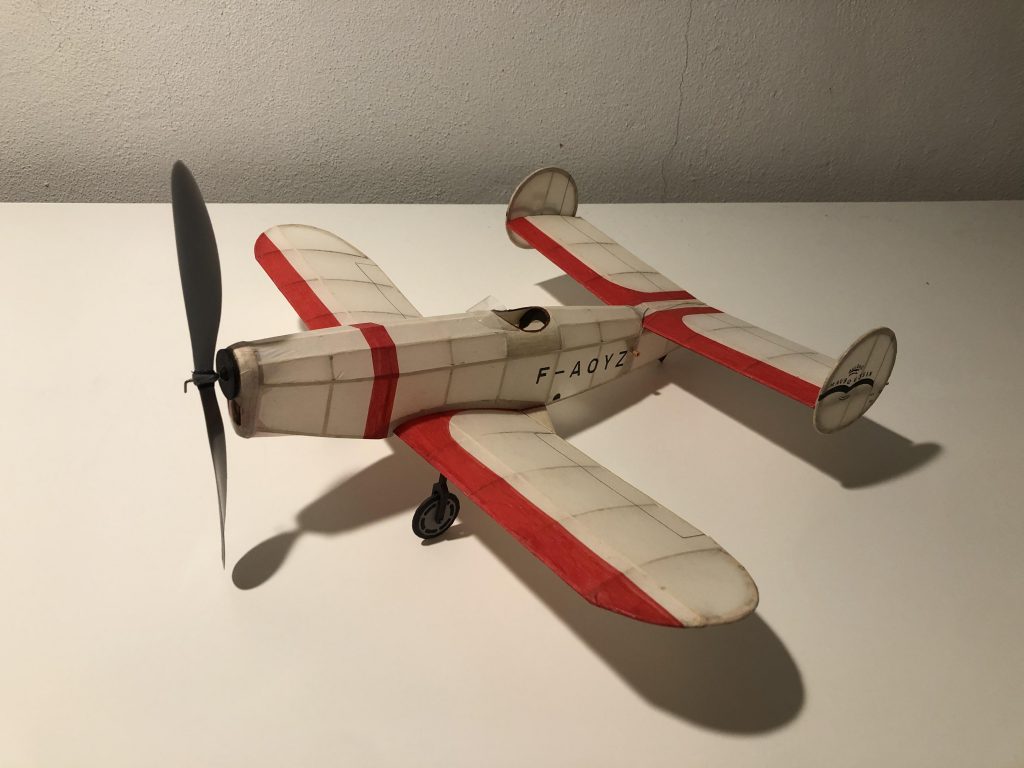 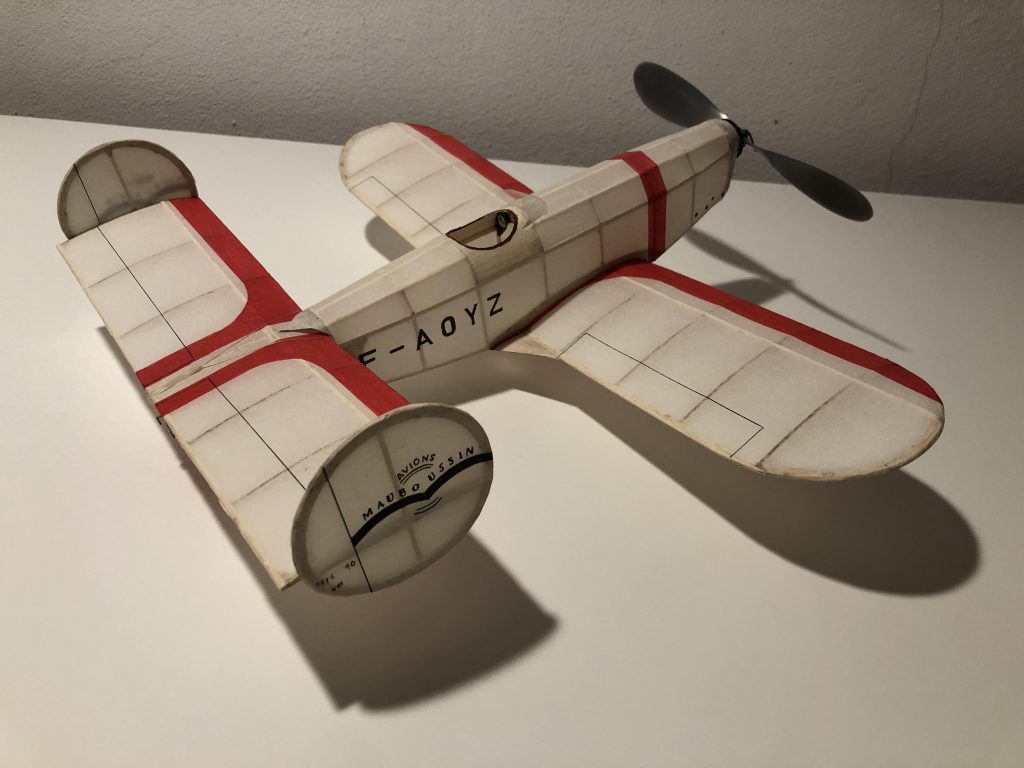 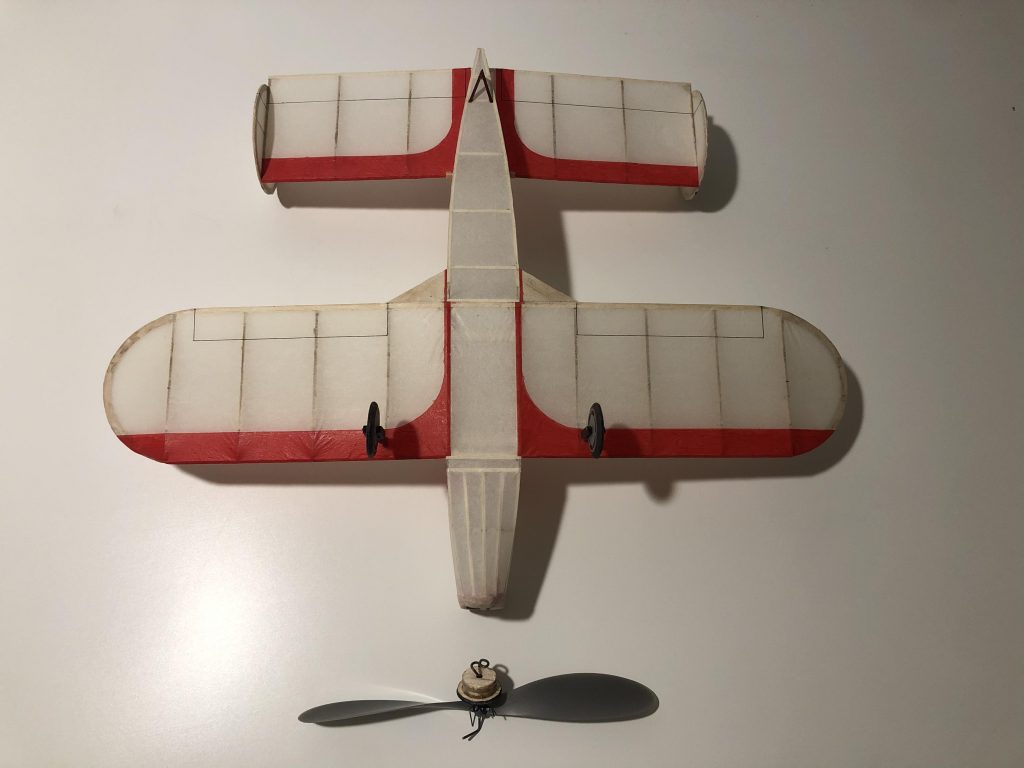 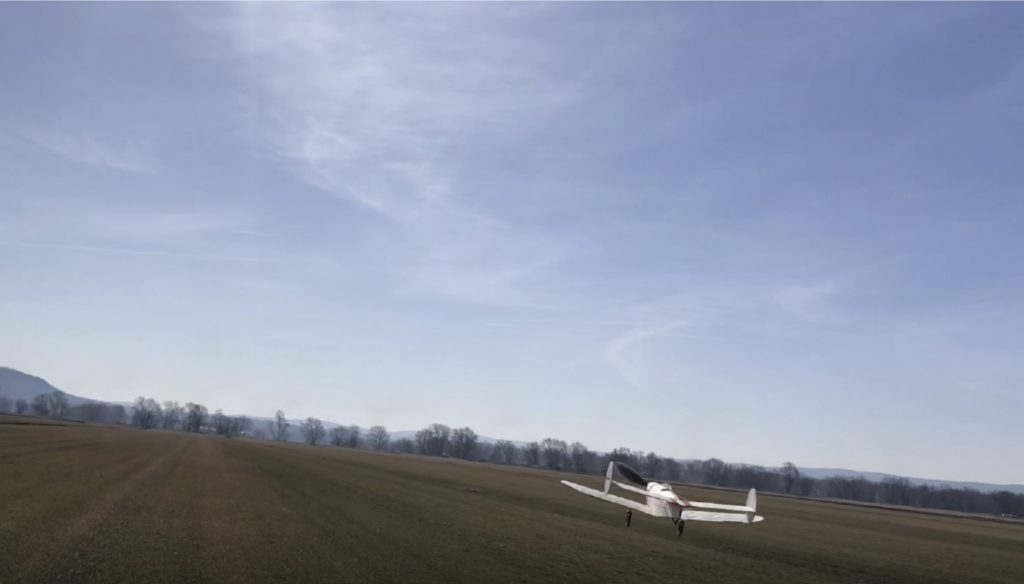 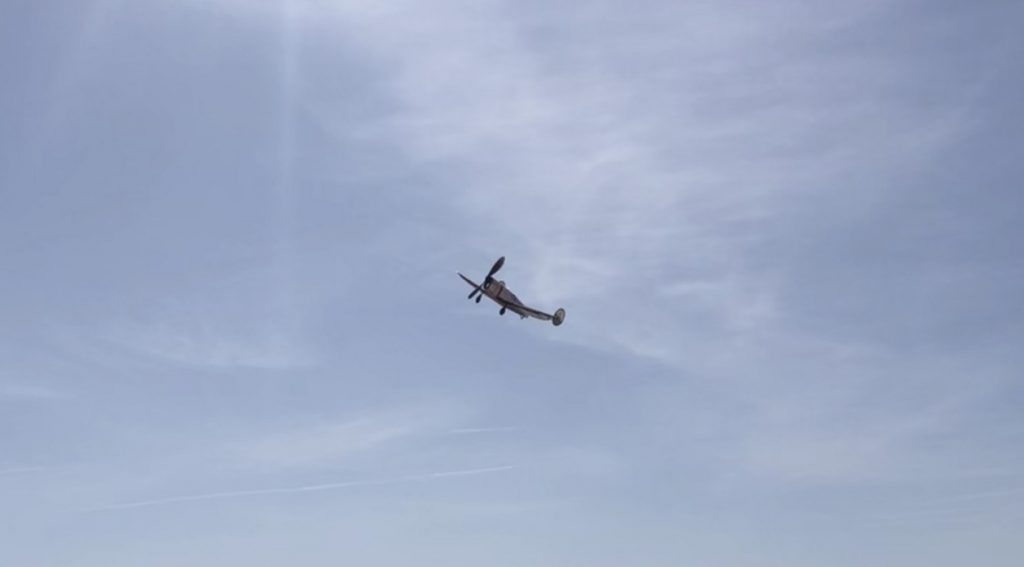 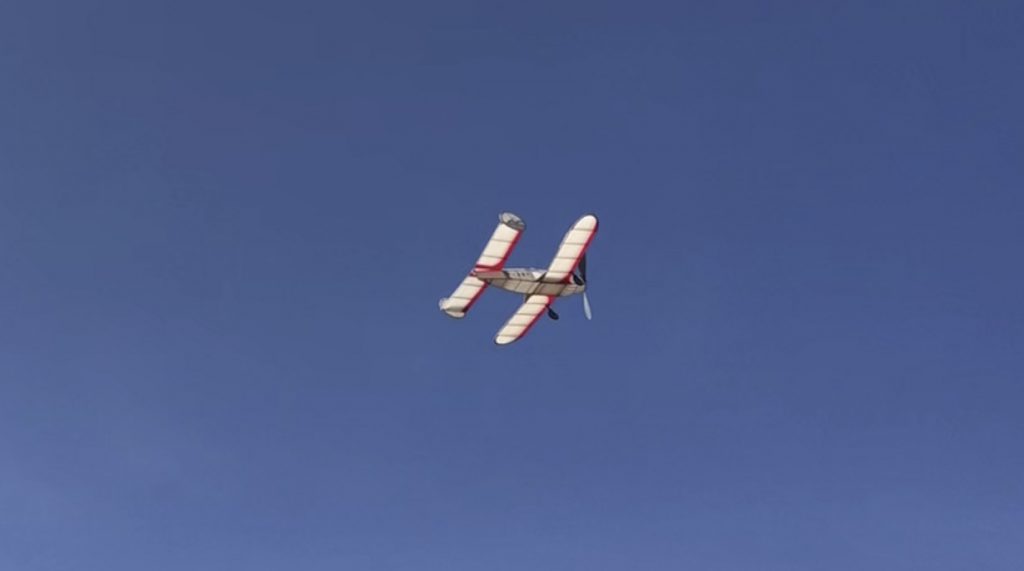