The Thompson Race in the Flying Aces Club is for pre-war racers with radial engines.  Think:  GeeBees, Wedell-Williams, Laird Super Solution, Laird-Turner, Cessna CR-2 and CR-3.  Back over 20 years ago, there were restrictions against “factory” racers – or any commercially-built race plane.   That gradually changed and now you can find Lockheed Altairs, Beech Staggerwings, and more racing in the Thompson.  One of the models that has emerged as a consistent, maybe even dominating, winner in this event is the Mr Mulligan.  As a high-wing cabin, it might be easier to build, trim, and fly than most other race planes.

If you’re like me, you are always looking for the obscure, unusual, or just a little different – not wanting to build what everyone else is building.  But I wanted to build a “Mr Mulligan Killer” – something that would be able to challenge the dominance of the white high-wing.  For over 20 years, my plan was to build Johnny Livingston’s clipped wing Monocoupe, but then I discovered a new subject for the races:  the Cessna C-34 – with the benefits of no struts and no wheel pants! 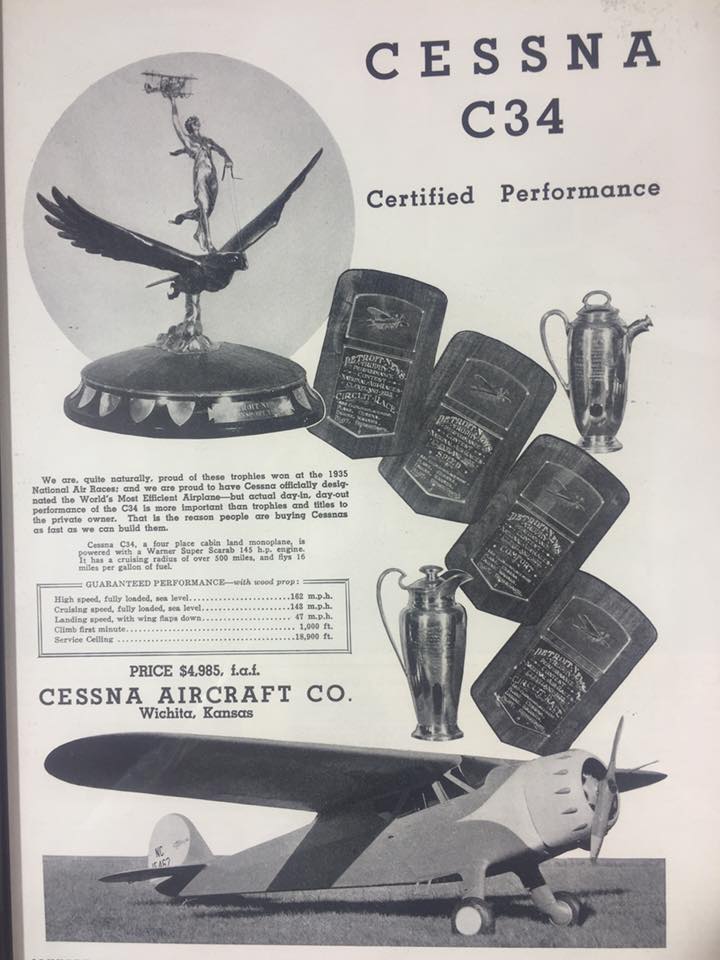 The first eligible C-34 for the Thompson – but only if you accept the Detroit News Trophy as a “race”.

The current wording in the FAC Rules permits airplanes that raced in other US races, not just the big National Air Races.  As I did my research for a possible Dime Scale C-34, I kept running across references to “trophy winner” and “winningest airplane” – it seems the C-34 helped Cessna secure the Detroit News Air Transport Trophy (a four-event race for; economy, speed, and minimum take-off and landing capabilities with the best passenger safety and comfort).  A Cessna AW had won years before and in 1935 and 1936, a C-34 provided the 2nd and 3rd manufacturer wins and Cessna earned the permanent possession of the trophy – and much-needed attention and sales resulting. 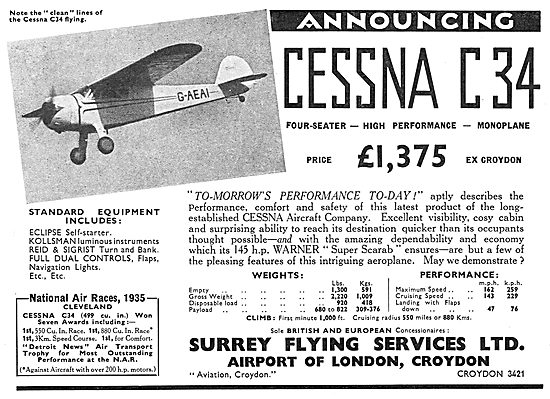 Notice the list of 1935 NAR wins in the lower left corner!  (These are the trophies in the first ad above.)

But efficiency tours are not usually considered “races” and I did not want to claim that the C-34 would be eligible for the FAC Thompson Race by virtue of an efficiency trial, even if speed was part of it.

At the 1936 Miami Air Races, Cessna also won the Argentine Trophy with a speed of 156 mph – but how was that race structured – and talk about obscure – who would willingly accept that without thinking I was trying to pull a fast one in qualifications?  I hoped I could find more definitive, less suspect race results.  I did so in the 1936 National Air Races. 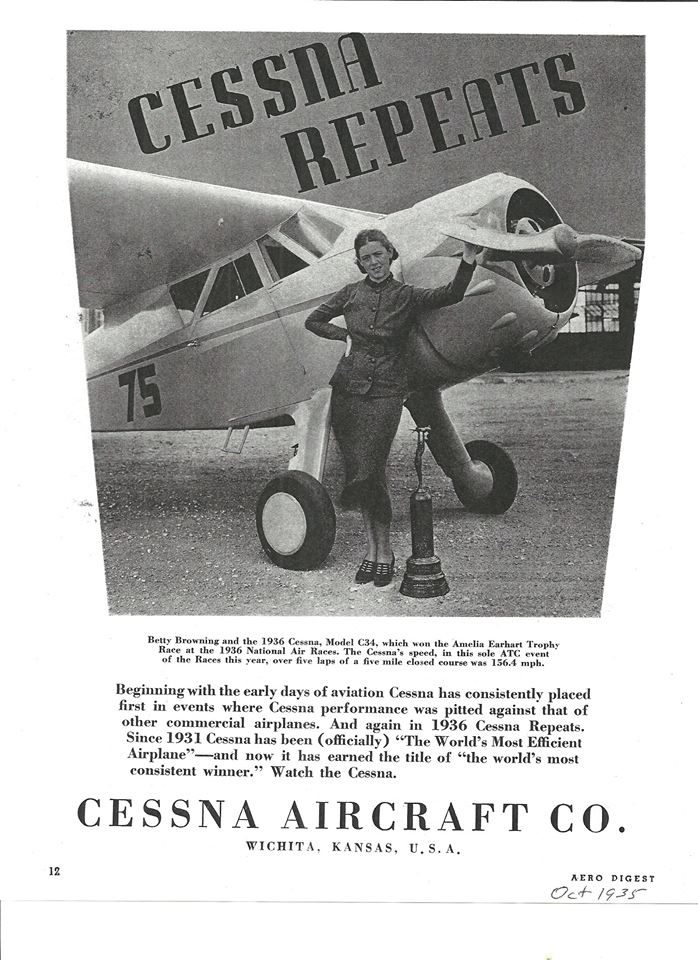 Betty Browning won the Amelia Earhart Trophy at the 1936 NAR (Los Angeles), a 5-lap, 25 mile pylon race for women pilots.  She flew the same C-34 that won the 3rd win of the Detroit News Trophy – and the Argentine Trophy:  s/n 320, NC15852.  This is a “real” air race!  If you discount it because it was a women’s race, then you are discounting the real accomplishments of women pilots of the time. 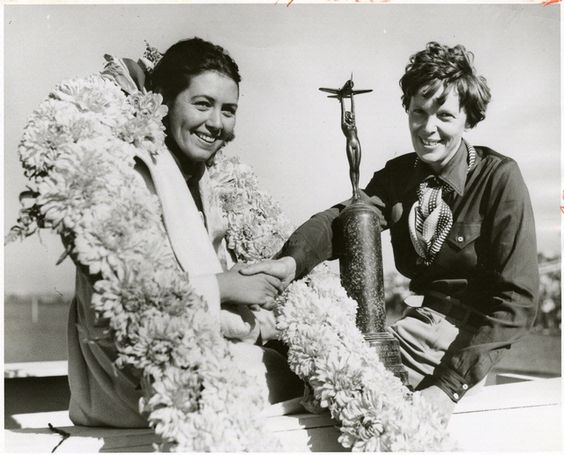 On to the documentation of the plane – what color was it?  Well, the two photos I could find of the plane, we can see a light overall color with darker stripe and an even darker race number. 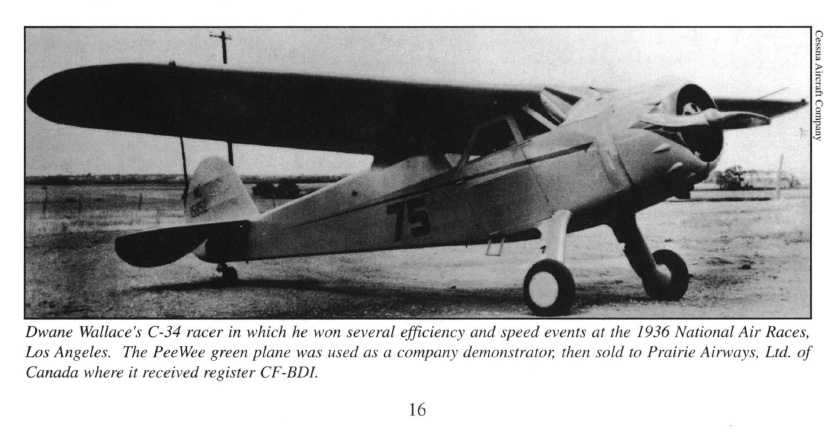 I also found references to “green” and “pee-wee green”.  I assumed a light green with a dark green stripe and a black “75” for the races.  I asked online in a Cessna Airmaster group “what color was pee-wee-green?”  Cessna historian, William Koelling, provided this image: 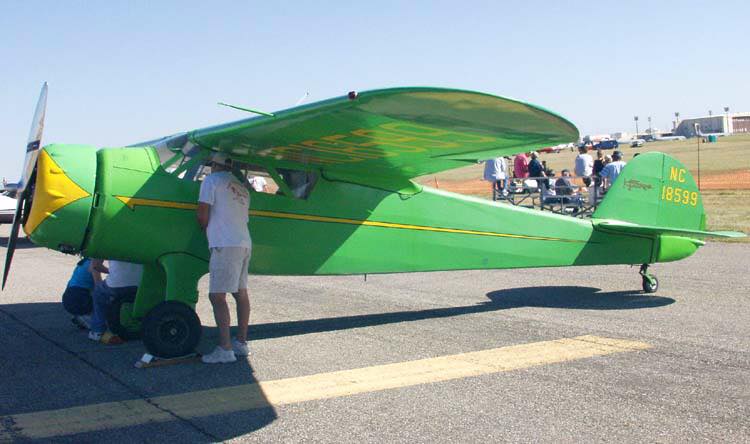 Note that this has yellow highlights, whereas #75 has darker highlights.  Then, months later, Mr Koelling posted some Cessna historical documents: 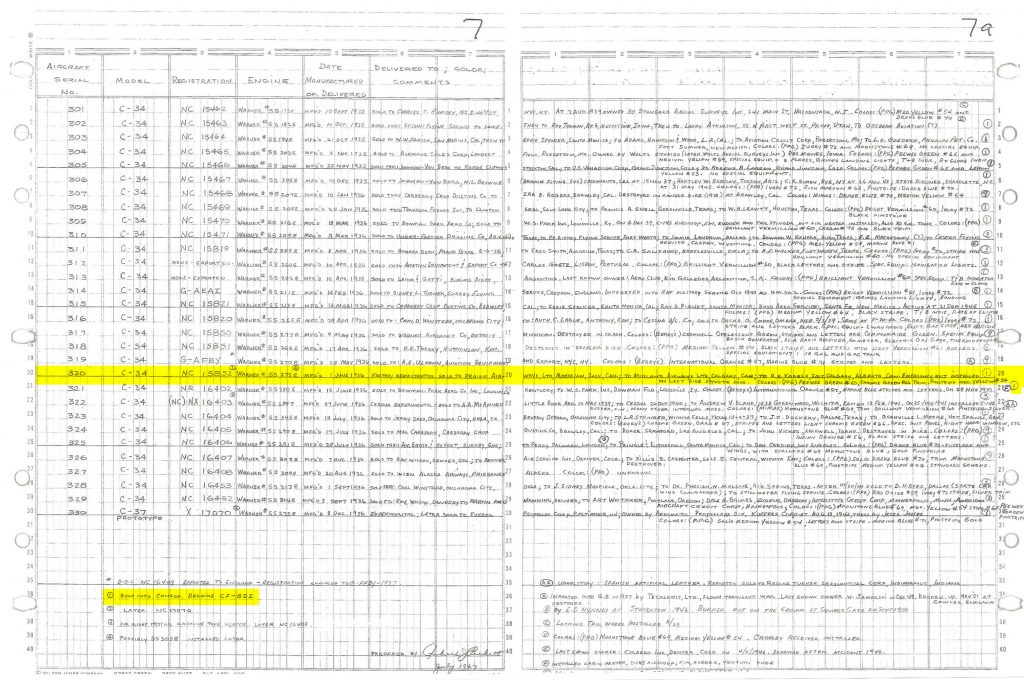 This solidified the colors:  PPG PeeWee Green #65, Chrome Green trim #66, and a Medium Yellow pinstripe #54.  I found that Design Master Spring Green is pretty close to PeeWee green, so I used that for the main paint.  Then I found samples online of Chrome Green and used them to print the stripes and numbers on the tissue before covering. 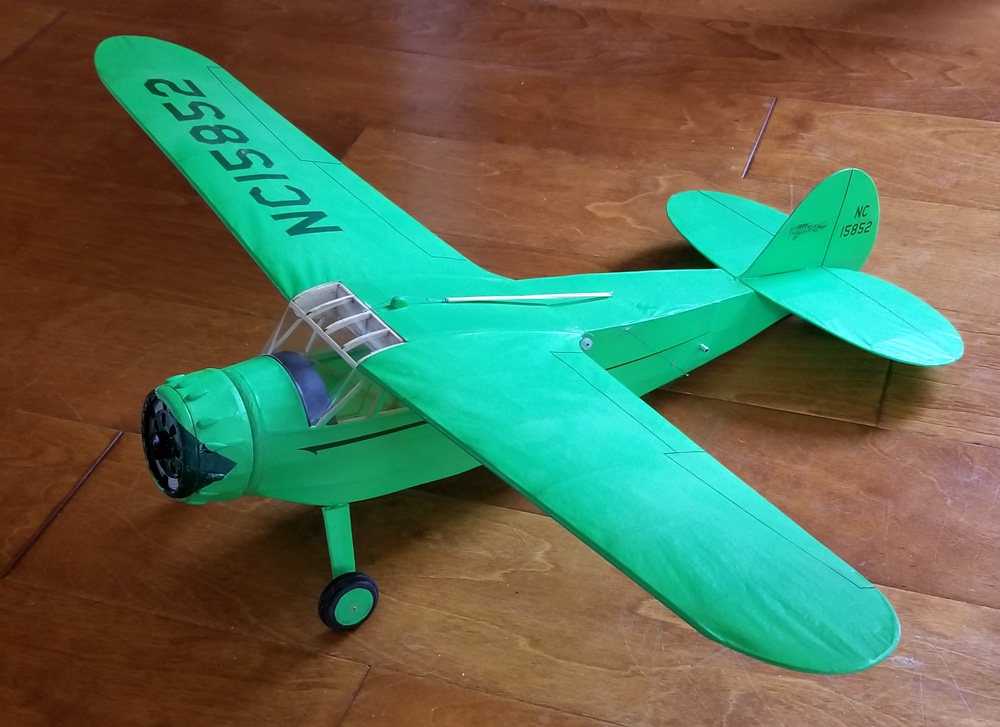 So, there you have it!  Enough documentation to prove that the Cessna C-34 can qualify for the FAC Thompson Races under the current rules of “The Thompson Trophy Event is for models of aircraft with radial engines that were entered in the Thompson, Greve,
Bendix, or other domestic races held from 1929 through 1939.”  Not only did the C-34 enter races, it was a winner!