I volunteered to manage the Flying Aces Club events at the 2018 AMA Indoor Nationals in Rantoul, IL. As a result, John Koptonak and I were the scale judges. We judged entries from four contestants, ourselves included. Little did I know that this would lead me down a completely unexpected rabbit hole – research and discovery regarding the much beloved (or hated) Lacey M-10.

The Lacey M-10 was a one-off* homebuilt from 1962 or so. It is very popular with modelers because it doesn’t have any curves (excepting the airfoil, the flat curved windscreen, and the wheels) – all of the longerons and tail surfaces are straight lines – making building simpler for the modeler. In addition, they must be easy to fly (I’ve never built one) as beginners often tackle them and fly them with success, even though it has no dihedral in the wing. 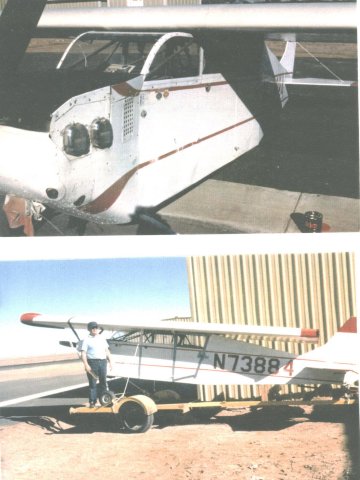 the original Lacey M-10. Note the black cowl top and the lack of red pinstripes on the tips of the flying surfaces

* – One-off: while over a thousand full-scale plans were sold, only the original was known to be built. However, the designer, Joe Lacey, did build another with two VW engines mounted on pylons off the each side of the nose. 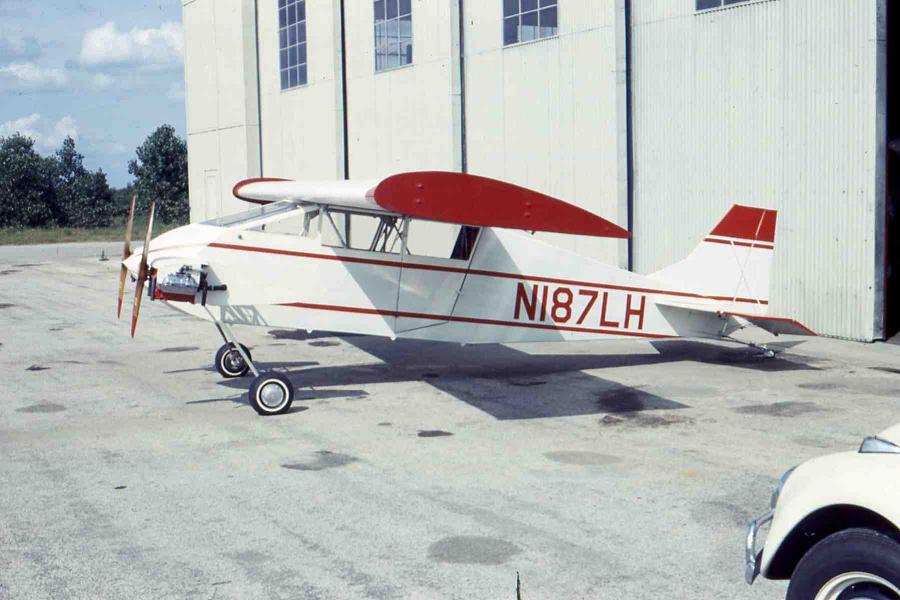 This is the TWIN – not the same aircraft

Out of the six judged Peanut models, from four modelers, two were Lacey M-10s (full disclosure: one belonged to John). Both provided the Peck plan (from Butch Hadland in about 1976) as part of the documentation package and both had different photographs in the package. The FAC rules say three important things about your documentation: 1) you must have a 3-view, 2) plans are optional and, 3) any details provided via photographs take precedence over the plan or 3-view. John and I discovered that both models used the Peck plan as primary color documentation and this lead to issues as the plan shows red wing and tail tips WITH a secondary red stripe. No photo provided in either documentation package showed an additional red stripe. In addition, one package showed a color photo with red registration numbers while the Peck plan indicates they were black.

George Nunez’ Peanut Lacey. This model flew for 108 seconds – the highest flight time of any Peanut or Scale model at the Indoor Nats.

There were other deviations, but the thing that got me going was the fact that while there are only a handful of photos of the original aircraft available, they DO show details that should be modeled and are often overlooked. When I returned home, I started digging on the web. I found that one source of information is the fine article authored by Andy Septon in the June 1999 issue of Aeromodeller. That article also includes a very fine 3-view of the M-10. It even includes photos and information showing that the ORIGINAL color of the aircraft was SILVER with red trim (I don’t think I’ve seen a Lacey modeled in Silver!). 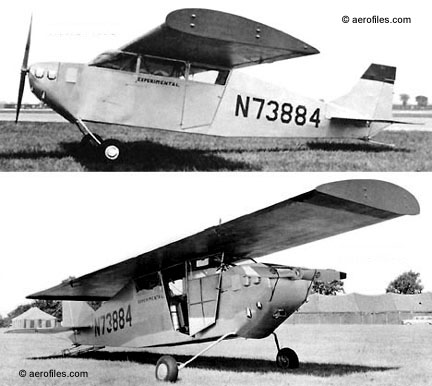 I found a few other photographs, essentially what was provided in the two documentation packages. But I also found something else – the N-number registration is still active, and listed as a Lacey in Fountain, Colorado. A quick check with Google Maps showed me that Fountain , CO is just south of Colorado Springs – where FACer Don DeLoach lives. What an interesting development – maybe we can get additional documentation of the Lacey M-10 and provide it to the modeling community. No more guessing on certain things when you have photographic proof. Don and I discussed it online and we found the trail to the owner and he made an appointment to visit the owner at the airport where it resides. The owner, Al Spratford, has almost completed restoration and is nearly ready for flight certification. Al Spratford is mentioned in the Septon article as the current (in 1999) owner; he has owned it since 1991.

Don let the FAC world on Facebook know he was on a mission without providing details. I was the only one that knew what he was doing and I awaited anxiously as he set out with his camera. DOn has posted these photos on Facebook. I am sure you are as surprised as me to see the current state of the one and only Lacey.

Mr Spratford received the plane without an engine, without fabric on the fuselage and basically in parts. He has done a “tubing-up” restoration and dubbed the current plane the Lacey M-XIII (13) as he has made three major changes to the aircraft: the Continental 90 was replaced by a Lycoming, the windows were restructured to give more visibility, and the vertical fin was changed. Stringers were added behind the wing on the top and the sides and it looks like the longerons, top and bottom, now have a gentle arc, smoothing out the sharp straight lines of the fuselage. He also removed the tip plates and added some wingtips (increasing the span), and he plans to add a spinner and wheel pants (photos to come later). The windshield was also changed and that change makes it look like the rotating wing (for storage and transport) has been eliminated. Oh, and most visually obvious, the Lacey M-XII now has a new paint job.

Don sent me about 45 very high resolution photos of all angles of the plane and about 10 photos of photos of the original aircraft. Since he went to all that work and the results are something new, I agreed to draw up a 3-view and I have started on a set of 1″:1′ plans (21.5″ span) of the Lacey M-XIII. I will get the large batch of photos on my site for complete documentation, but both the plan and the package will take some time. For now, you will have to make due with these photos and the thought that you will soon have a new Lacey plan to dominate Simple Scale or Modern Civilian. 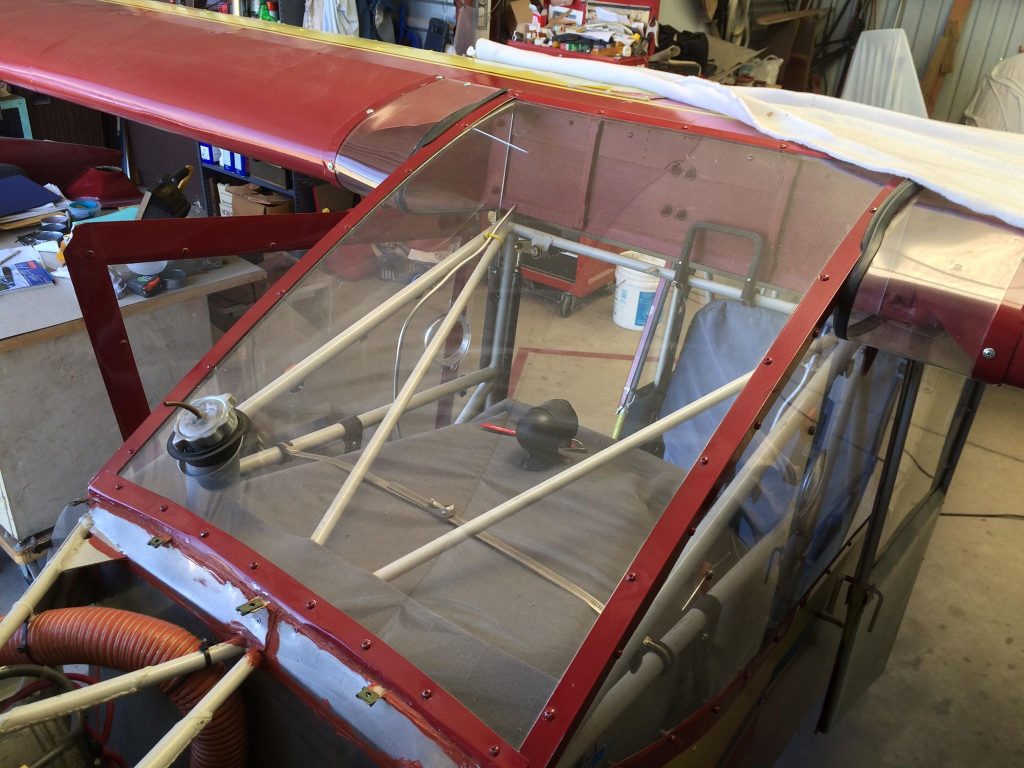 note the new wind screen AND the clear sections of the wing. 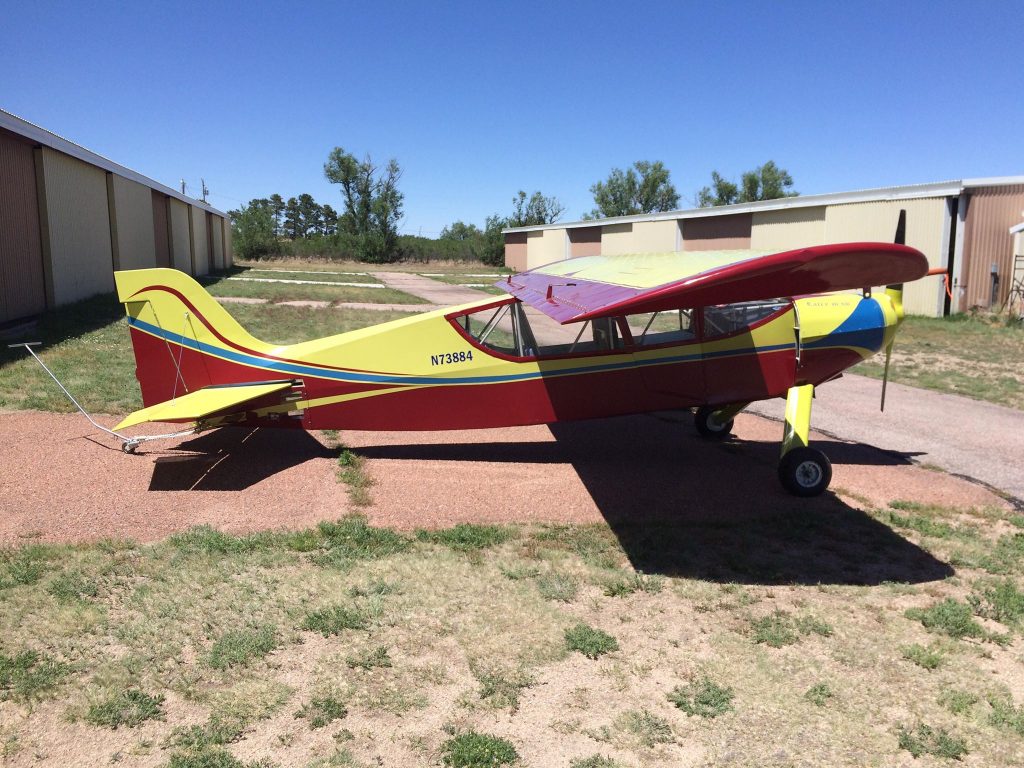 a nice side shot showing the new fin, the gentle arcs of the longerons and the stringers on top and sides. 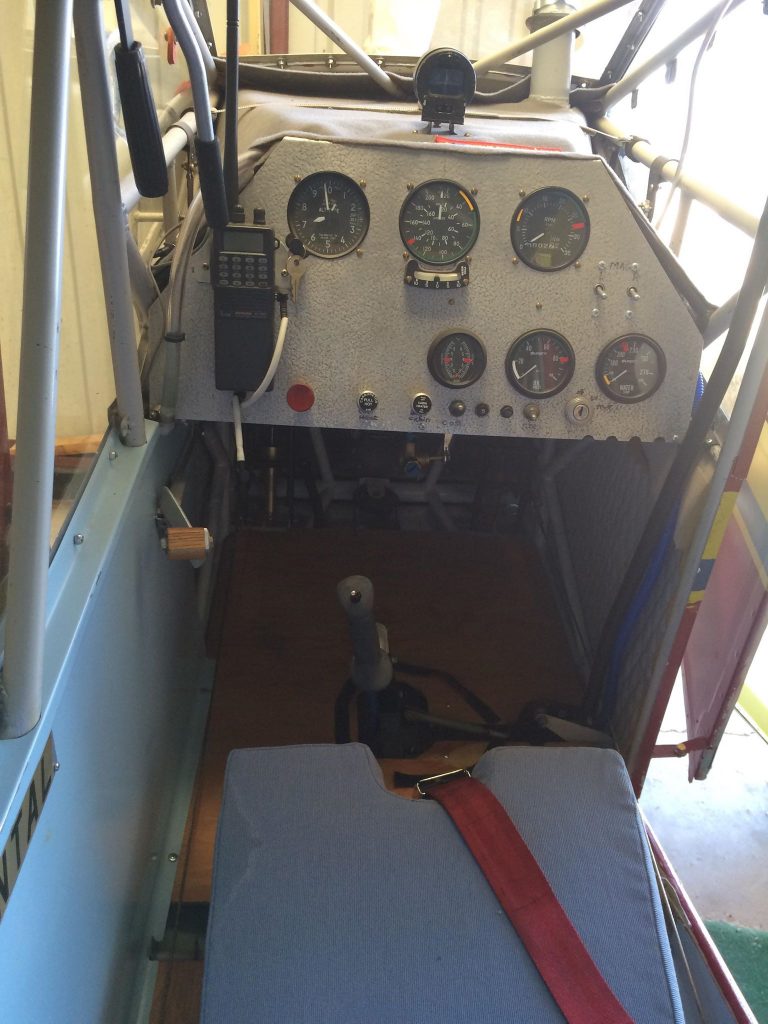 the original joystick was suspended from the wing. 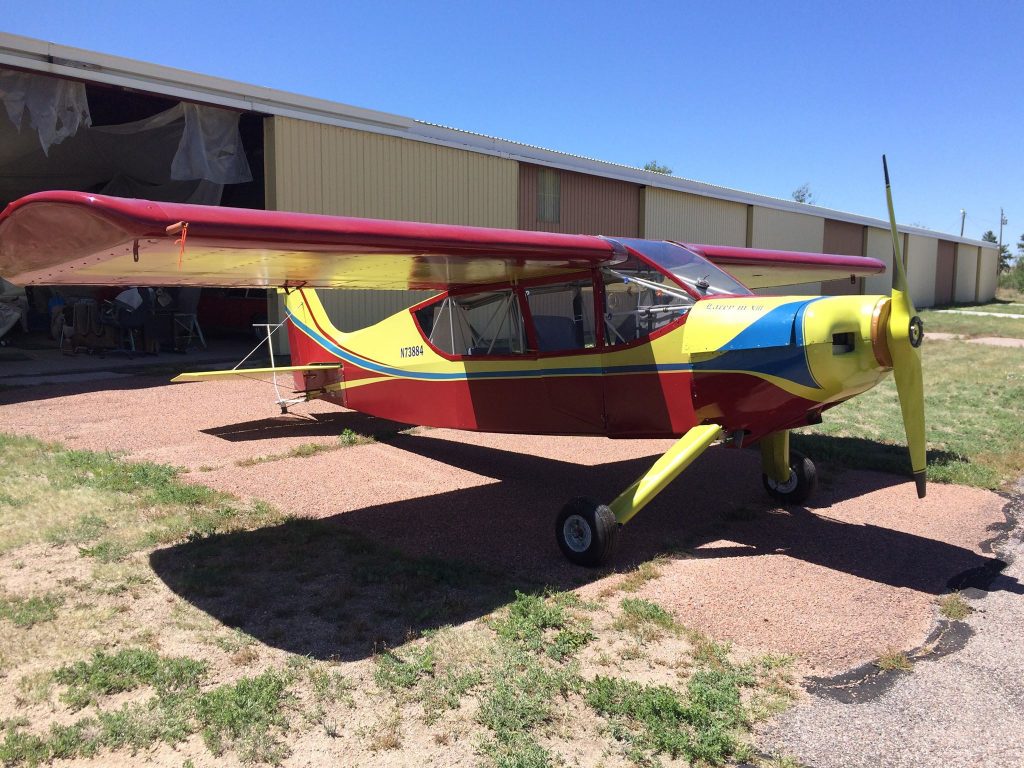 it sure is colorful now! 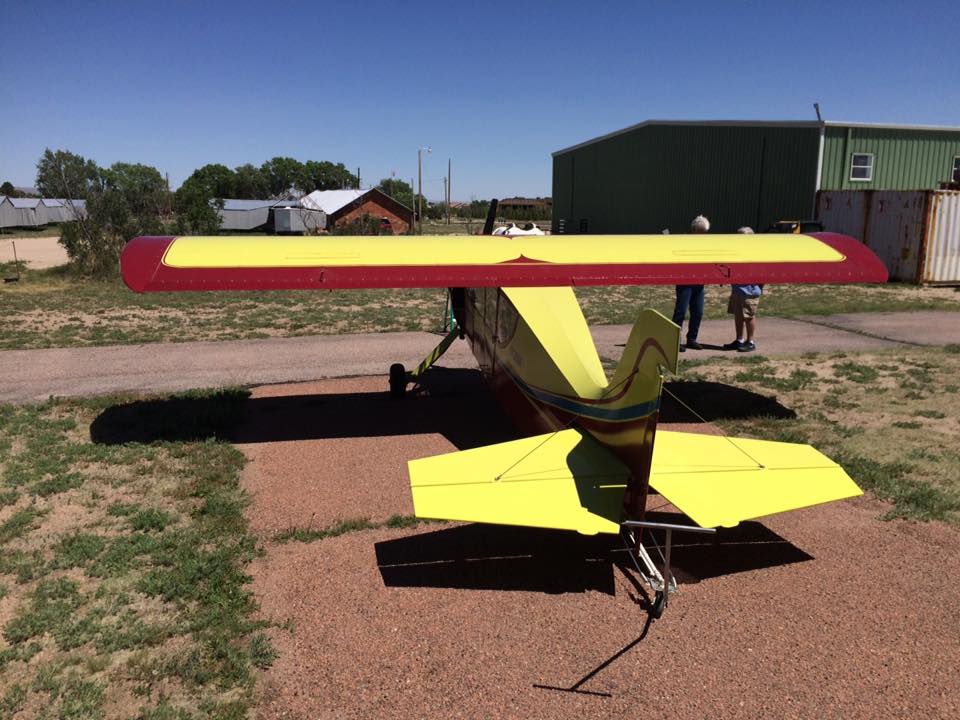 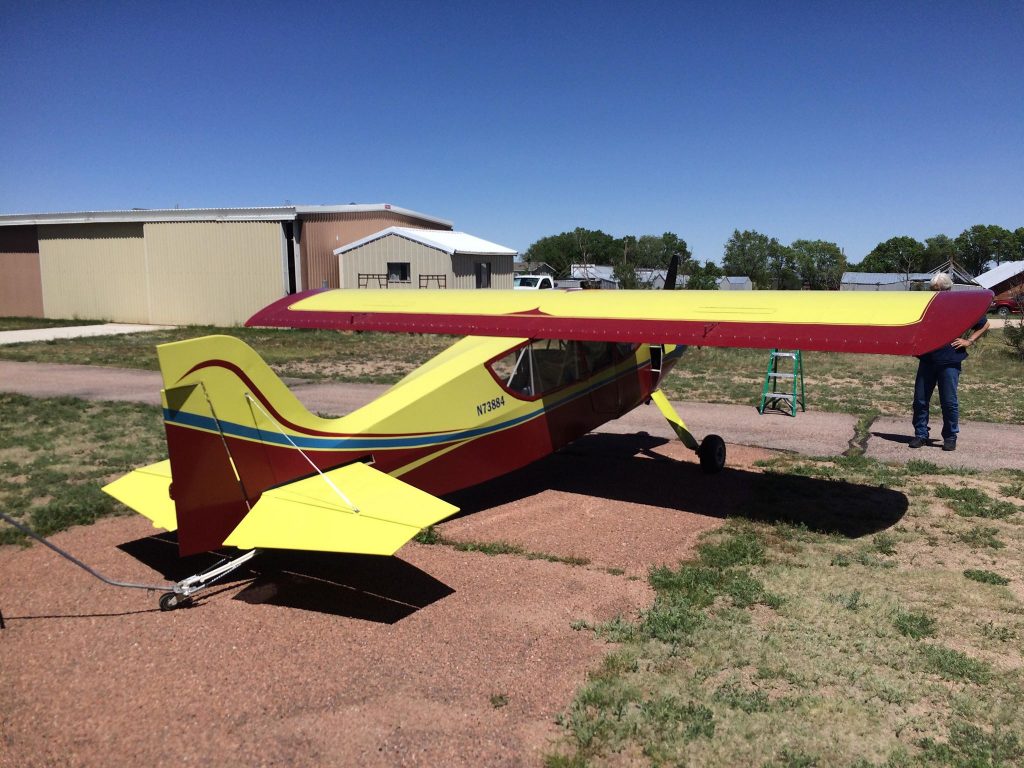