Oh, the travails or Indoor FAC Free Flight.  Last Thursday (13 Oct 2022), I headed northeast to Pontiac, Michigan to our (the Cloudbusters) first Indoor contest of the year.  We had a light turnout, so most of the day was spent testing – and that was fine because new models need testing.

We are going to discuss my brand new model for the Combined Greve/Thompson NoCal Mass Launch event.  For the past couple of years, I have been flying my Folkerts SK-2 and it has been great, if not dominant.  But it has suffered many breaks from crashing into the rafters 60 feet above the floor.  As a result, the wings are warped and times are down – it’s time for a new model. 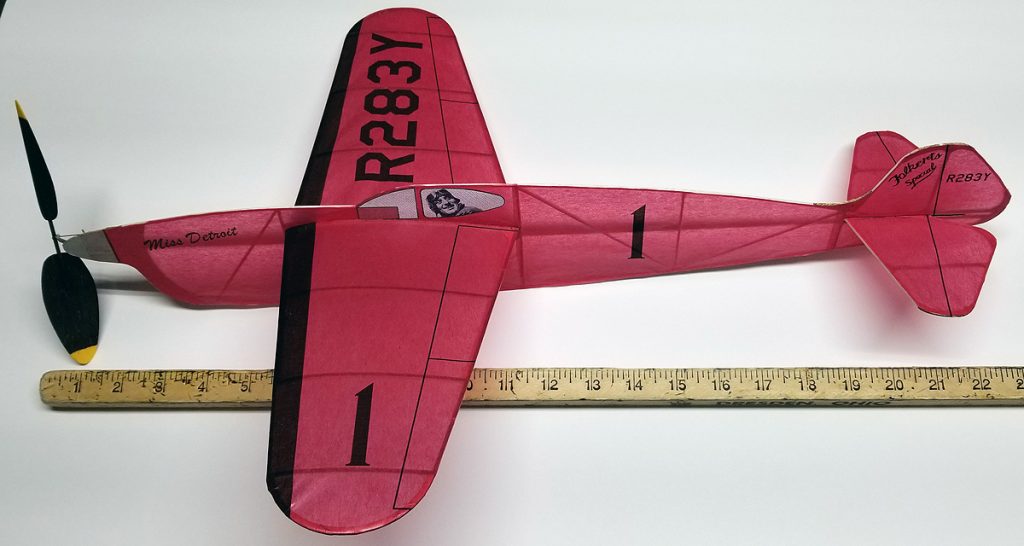 The Folkerts is a big NoCal 22″ from nose to tail, with 62.5 square inches of wing area.  And mine came out to 7 grams – just a little above the 6.2 minimum weight for the event.  The result was consistent time over 3 minutes and a high time of 3:47.

So – a new plane – what to create?  Well, bigger is better, right?  I searched for long-bodied, short-winged planes of the era.  That combination make for lots of wing area and lots of rubber capacity – theoretical “good things” for Scale Free Flight subjects, especially in the NoCal event (well, it’s MY theory, anyway).

One of the smaller, if not smallest airplanes designed for the pre-war National Air Races was the Floyd Bean Special. Designed in collaboration with the Chambermaid, it is very similar; more round in the fuselage and a longer nose.  It had a span of just over 13 feet and that long nose was due to the Menasco 6-cylinder engine (the Folkerts SK-2 only used a 4-cylinder Menasco engine).  The real plane was too late for the 1938 Races, and landing gear problems prevented entry into the 1939 Races. 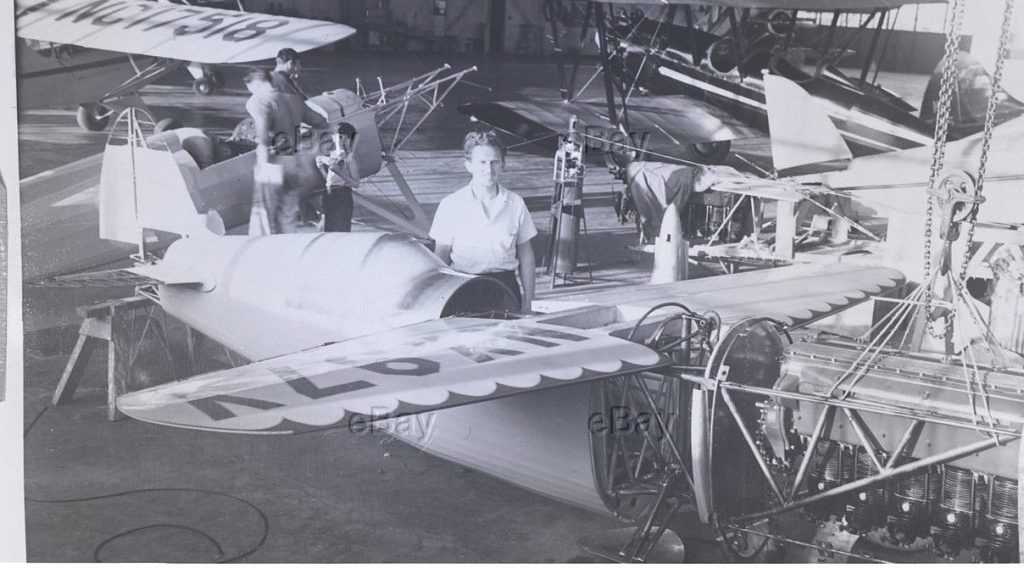 I used the Kerka 3-view and scaled everything for the maximum 16″ wing span.  This makes a monster NoCal:  just over 26″ nose to tail, with almost 78 square inches of wing area and about 19.5″ hook-to-peg for the motor – it’s huge! 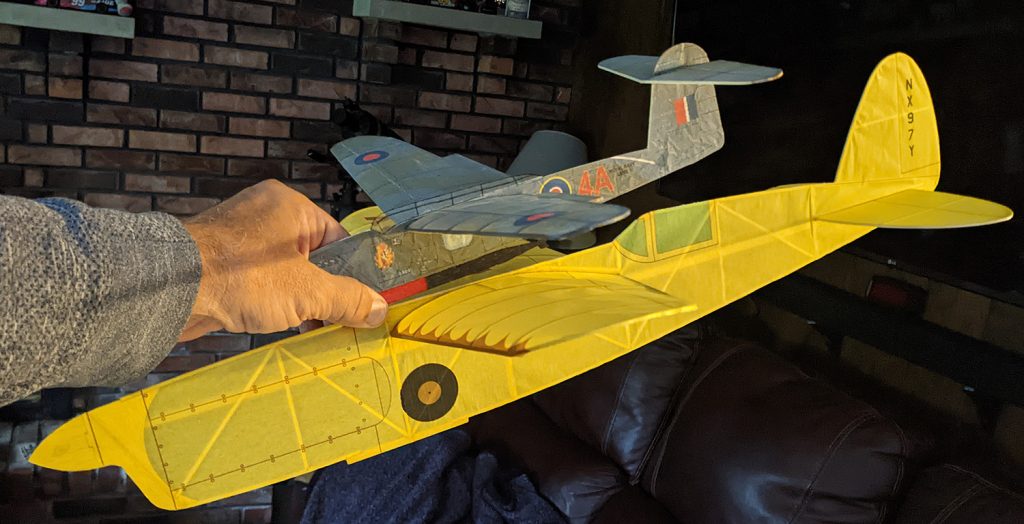 I made up a formed prop for it – a 7″ diameter formed on a 12″ pitch block with a 1.5″ wide Larabee profile.  I also used one of my mini-Gizmo Geezer adjustable NoCal nose bearings (this would be the first test of them).  After fitting all of the required nose parts, the total weight was just at 10 grams.  Oh, that hurts.  The target was 7 grams.  I used 5-pound wood throughout, except the motor stick which is made from 1/4″ balsa – 4-pound balsa.  Of course, it took a whole sheet of yellow tissue to get all the pieces.  I calculate there is about 1 gram in tissue alone.  Anyway, on to the actual flying of the model!

I did balance and glide testing with a full motor (25″ loop of 1/8″ – the Folkerts, lighter and smaller, used 24″ of 0.102″ rubber, so a bigger plane requires a bigger motor) and found I had to add a small amount of clay to the tail to get a decent glide.  “Gliding” is important in NoCal – most of your flight is on cruise, so you need to have a flat glide to allow for the lowest power flight.  I did a low-powered test flight of about 1000 turns and made a couple thrust adjustments and put in 2000 turns for a real test.  I was pleased as I hit over 2 minutes on it’s first real flight.  Of course, it wasn’t perfect.  The “cruise” had lots of minor porpoising, but no really bad characteristics.  After 5 or 6 additional test flights, tweaking thrust, but mostly taking off tail weight, I managed a really good flight as shown here:

A 2:29 on the first day sounds like a “woohoo!” moment – so whats the “ugh”?  To put it bluntly, it is going to take more than 2.5 minutes to win the races – a lot more.  As I said above, my Folkerts was dominant at 3-3.5 minutes – but it raised the bar locally – other were catching me and I was losing contests with the old broken-winged bird.

“Just keep tweaking and get more time.”  That’s the general process, but I don’t know if that will work here.  Here’s why:

So…the model is too heavy, requires too much rubber, and is too flexible.  I have been thinking these past few days on how to cure these problems.

I could probably buildup a rolled motor stick.  This would likely be stiffer, but probably not much lighter, and it would be difficult to retrofit.  That would make the plane stiffer, but wouldn’t make it lighter.

I could wind the current motor up and back off a few turns.  This help because you nave nearly the same turns, but less torque.  I can probably get a little bit more performance this way, especially on that shorter motor.

I could build a second model, using thinner wood in selected places, a rolled tube, maybe some Gampi tissue, a lighter selection on nose/prop pieces and – MAYBE – drop 2 grams.  That is very optimistic for me – I’m no Indoor modeler.

But in the end, this model might just prove that I have reached the limits of “bigger is better”.  If I am building a newer, lighter model, I should probably spend that effort on another Folkerts.  But I am not giving up on this one just yet.  It will see action in November.

Oh, yes, this will be a Short Kit soon.  I even have printed tissue templates made up for it already.