Well, “busy July” is over.  Of course, that the busy-ness overflowed into August.  Being away from home for two weeks means orders pile up.  Here are some quick status updates.

1 – AMA Outdoor Free Flight Nats:  I won Dime Scale!  I put up some pretty good times with my aging Cessna Bird Dog – 26 seconds longer than Don DeLoach and his Mauboussin Dimer.  He tried to come from behind with his 15 bonus points, but that still left me 14 points ahead!  Woohoo! 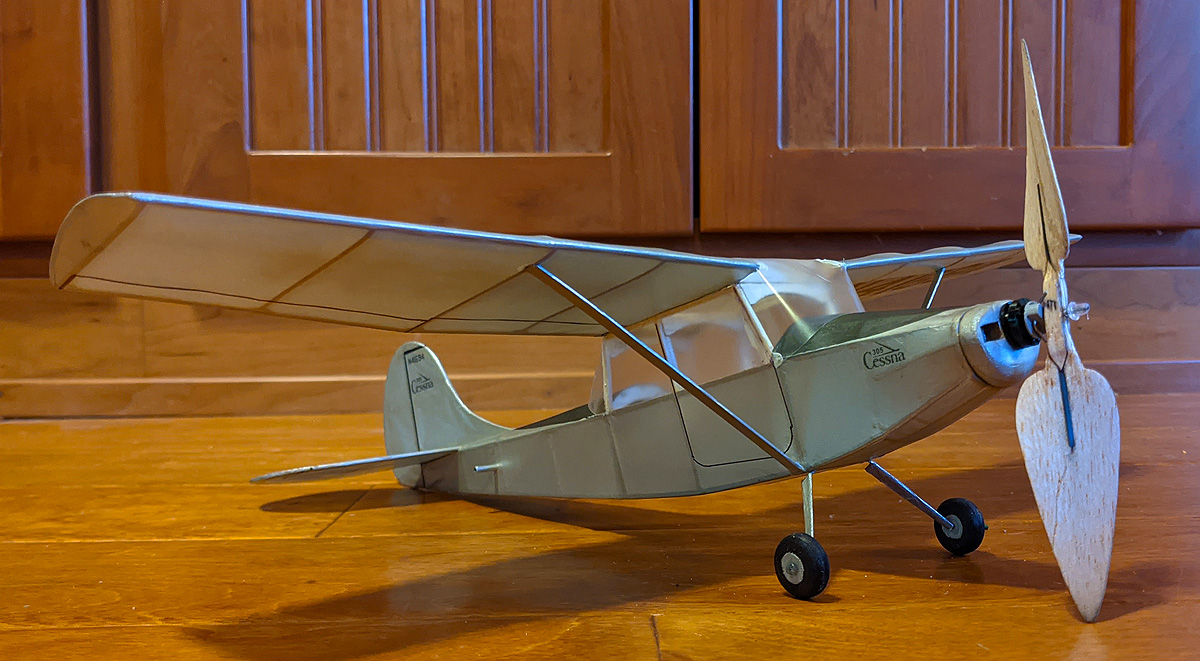 2 – Focke-Wulf FW-189 Jumbo Kit Progress:  I haven’t flown the -189 since Geneseo in the middle of the month.  But I have spent a good deal of time trying to prepare for Kit Production.  Many have stated that they are standing in line awaiting its release.  Here is what I am thinking so far:

Now you might be shocked (I was), but here are the details of why these prices are reasonable:

Vacuform Parts:  there are three vacuformed pieces, and I generally add $5 for each single piece in a kit.  So you are getting three for the price of two.

Counter Rotating Props:  A matched set of 9″ Superior Right-Left Prop Blanks.  There is even a small possibility that I could offer Counter-Rotating Plastic props, but that has to be finalized.

This is a complex model and you shouldn’t assume it will be next-to-nothing in cost.  It took me a lot of time to develop and will take a lot of time to produce and assemble.  It has been suggested that I include parts for the armored -V2 version.  This is possible, and if I do it, it will be mostly sheet wood and untested by me – but at no additional charge.

3 – Superior Props Future:  Recently, there have been shortages of some of the parts and pieces for the Superior Props hardware.  Most notably, Nose Buttons and Drive Dogs.  My dad, who is now 83 years old and two years a widower, has found a new interest for his remaining years and will likely be moving to the Netherlands.  He has been spending a lot of time over there in the past year or so and this has meant that his production of parts is not as readily available as it used to be – and will probably be reduced to nothing if and when he moves across the pond.

I have solved some of these issues – I now have Nose Buttons and Drive Dogs in such a quantity that I probably will never run out (and probably not the next owner, either).  I am working on prop shafts, but I know those can be made easily here (its just time consuming).  Also, I have lined up someone who will probably be able to take over the propeller production – IF we can arrange time for cross-training and get the prop machine moved again. 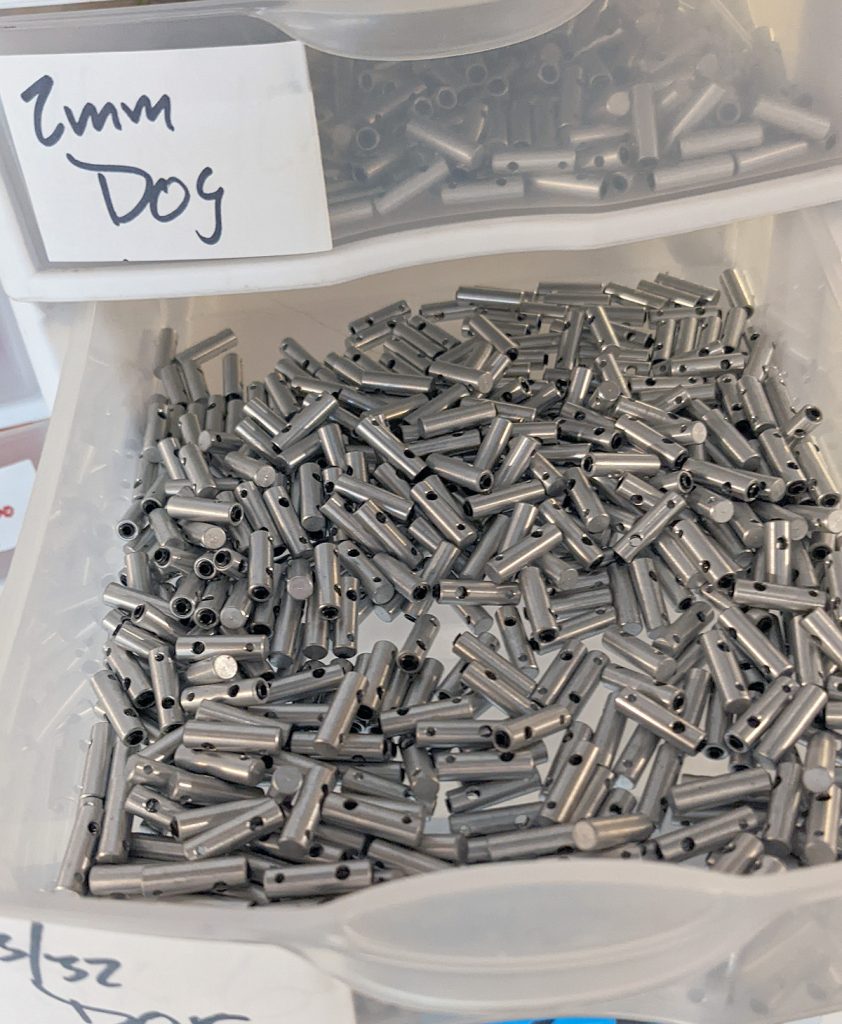 So, to summarize – Superior Products Prop Shaft Assemblies are back in production, as are the individual Drive Dogs and Nose Buttons.  Superior Props Clutches are an iffy situation; I don’t know if I will be able to offer them again (a complex part).  Superior Props Freewheelers and Folders may have a slow time of it soon, but it is not my intention to let this important part of our hobby die out.

Models in the Pipeline:  As always, I’ve got a ton of plans in the works!

I am sending out a prototype kit for an Old Time Stick – that could double as a P-30, as the dimensions are withing the rules.

Steve Neill talked about an old Shorty’s Basement kit for the Blohm+Voss P.215.  This was produced before I bought the company and was designed for Rapier power.  Steve was kind enough to pour a cast of the canopy and send it to me.  I did minimal clean-up work to the buck and pulled a canopy from it.  When I get around to this, it will be rubber-powered in a tractor configuration. 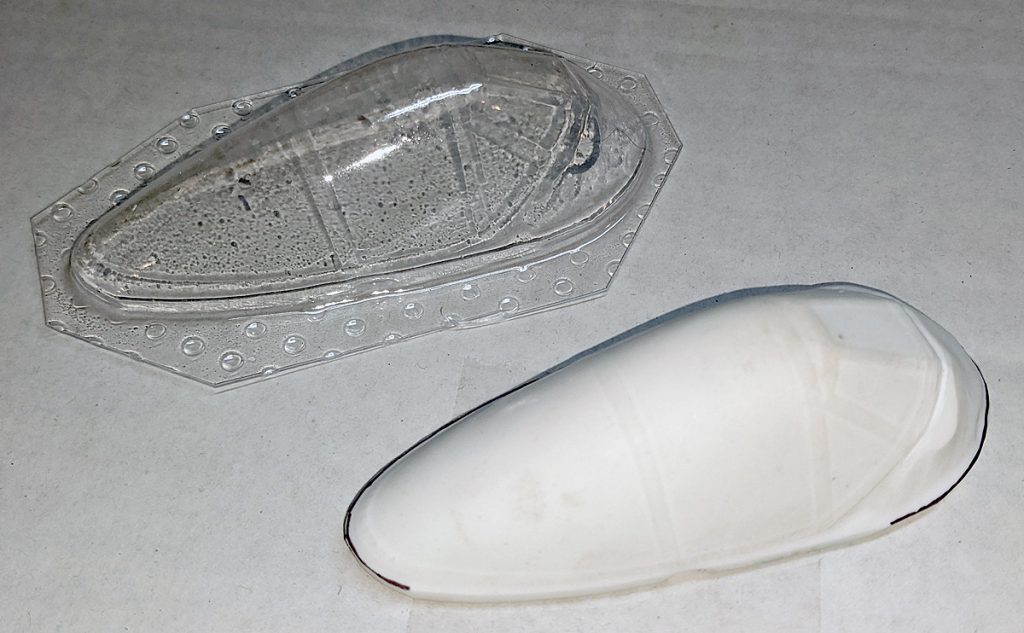 In the past year or so, I’ve enlisted the help of Archie Adamisin to do some finalizing of some 3D-printed canopies for me.  My knowledge of “modern” 3D design systems is rudimentary, at best.  I have been working in 2D CAD and converting them to 3D parts.  But my CAD program does not support lofting.  Archie had the knowledge and the software to bridge this gap.  However, he lost his software license.  Fortunately, he researched some products and found a suitable replacement for him (Atom3D).  I downloaded a trial version and struggled mightily.

Well, after a short Zoom meeting, and several hours of headbanging against the program, I think I have made some progress.  Today, I printed a complex canopy of my own design.  I’ve been waiting for several years for this.  In fact, I firs laser-cut this kit and built it in 2013.  Here, you can see the canopy for a Peanut Scale Junkers Ju-87d “Stuka”!  Look for a short kit sometime in the future (finally!) 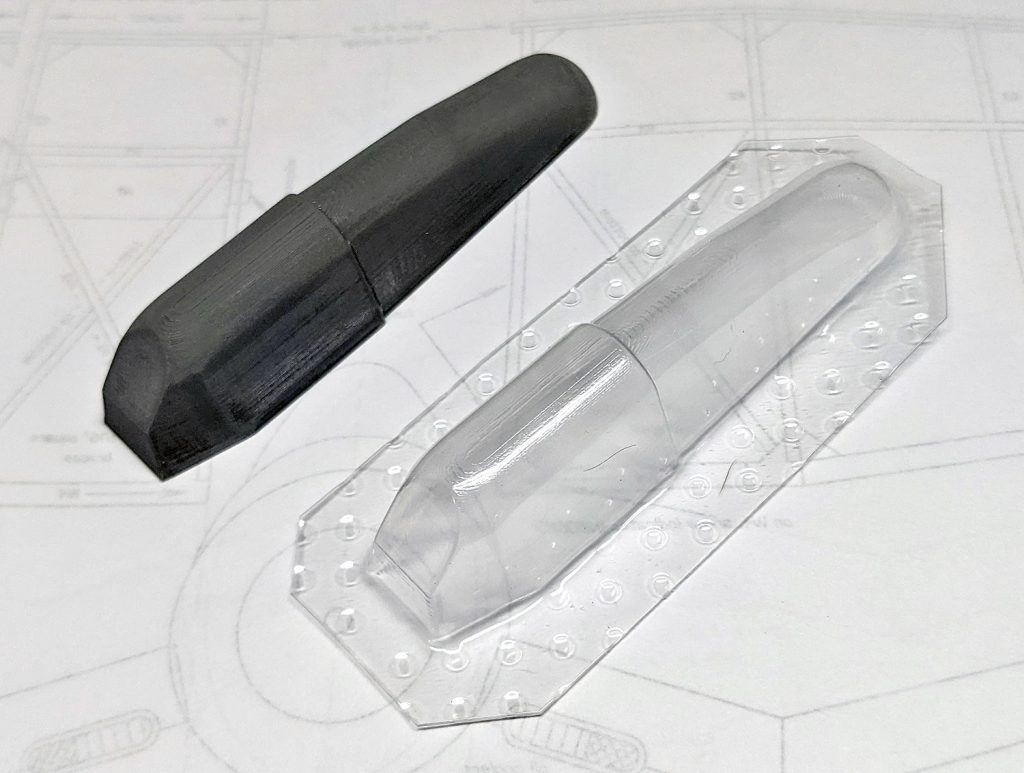 Lessons Learned:  At the AMA Nats last week, I broke my old Jumbo Stallion.  It has been struggling for a year or more and this was not unexpected.  In fact, I flew it several times at Geneseo and Muncie last month and many times I had to repair the cabin where the wing mounts.  It was so bad that CA-ing the old CA just wasn’t working very well.  But I was determined – and I said repeatedly that I would fly it until it broke, if necessary. 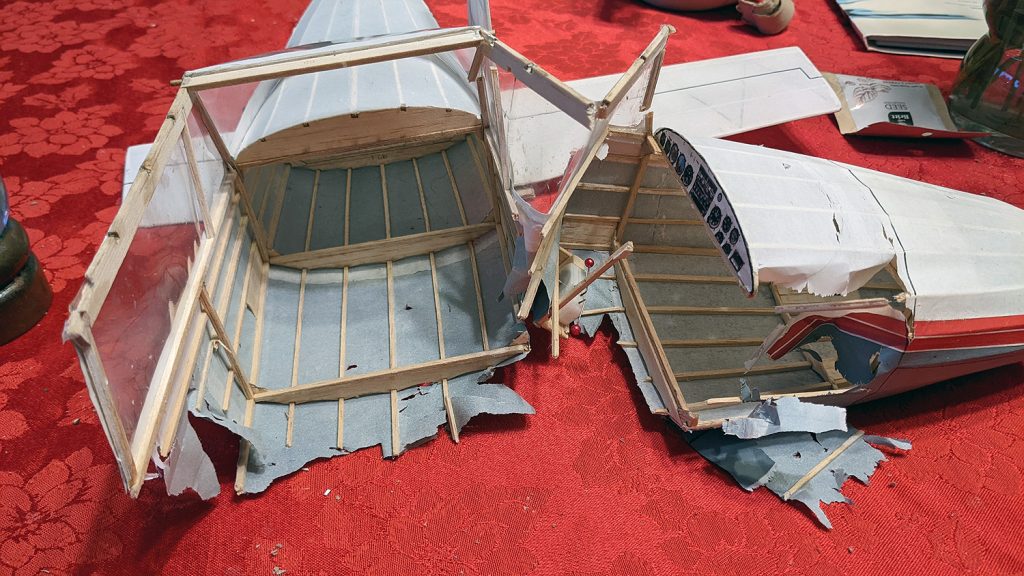 1 – I covered this with domestic tissue, sprayed it with Future floor polish, and thinned acrylic paint (you can read about it here).  It might be the tissue itself, or the combination of all three, but the tissue was becoming fragile in its four-year-old-age.  I’m thinking the tissue was the cause.

2- the structure was good.  Contrary to the above photo, this was a durable model.  Excepting the cabin and wing mounting design, it withstood a lot of abuse.  I think this was right-sized, in terms of wood sizes and spacings, etc.  There can always be improvements, but the fuselage did well, and the wing never broke. 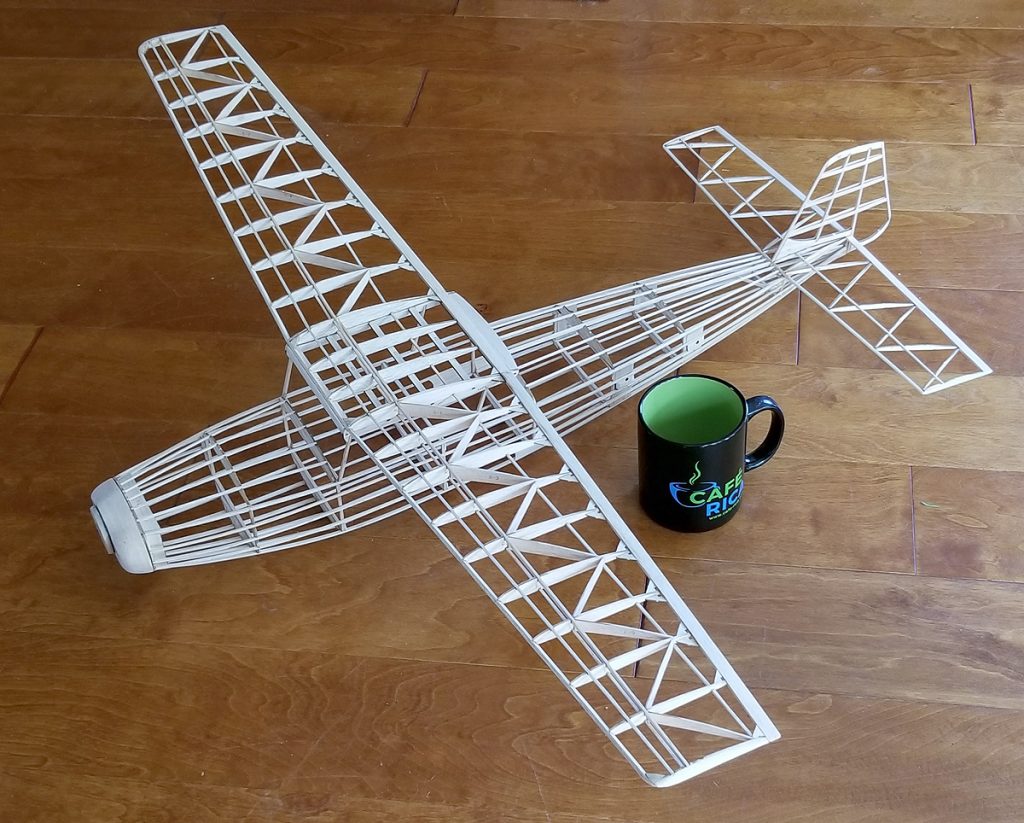 3 – Speaking of improvements, I never finished this plan/kit to Production.  I just didn’t like the way the “corners of the fuselage looked.  I have already been working on a redesign of the fuselage into a keel and half-shell design, hoping to smooth out those “corners”.  Yes, that means a third Stallion Jumbo will probably be built – this time with a resulting short kit.  I will definitely be reworking that cabin and wing mounting system to increase its durability.  No projected date on this yet, but I do like flying the big plane, even if it has no bonus points (it came in third in Modern Civilian at the AMA Nats).