Posted on 8 November 2021 by Bredehoft

It all started when John Koptonak announced that his Glastonbury Indoor group would be doing a one-design for their Indoor season – the 20″ Comet Taylorcraft.  Wow, what a neat idea.  Some of us Cloudbusters kicked it around informally and Archie Adamisin and I decided to do very quick parts layouts for all six of the kits that Comet sold for 10 cents.

“Quick” should read “quick and dirty” – these short kits have not been built and tested like my usual practice (although some are under construction).  And they do not come with redrawn plans.  We imported the venerable plan scans that can be found on the web, sized them to 20-inch span, and designed parts just like Comet had drawn them.  We did enhance a couple of parts (like wing anchor sheets) and added a couple (like motor pegs and nose sheeting) and those modifications are shown on the plans.

It took us about three weeks from idea to completion, but this morning, I cut the first parts for the last of the six kits.  Archie did the parts layout on three of them and I did the parts layout on the other three.  So, as of today, ALL SIX of the Comet 20″ 10-cent kits are available as short kits from Volare Products.  Each Short Kit comes with an enhanced copy of the Comet plan and one or two sheets of laser-cut parts.

These all should be great flyers – they are all simply designed and constructed like all original Dimers, but they have 25% more span – 20″ span.  These turn out to be surprisingly big models.

Now keep in mind, even though these were sold for a dime originally, they no longer qualify for FAC Dime Scale (the current rules specify a maximum of 16″ span for FAC Dime Scale.  HOWEVER, these will fit perfectly into the FAC Simplified Scale category.  Us Cloudbusters will probably try out a restricted Simplified Scale – restricted to these 20″ Comets – this Indoor season.  Stand by for how that turns out.

In the mean time, you can join the fun and grab one (or all) for yourself.  Just go to this page to find them:  HERE 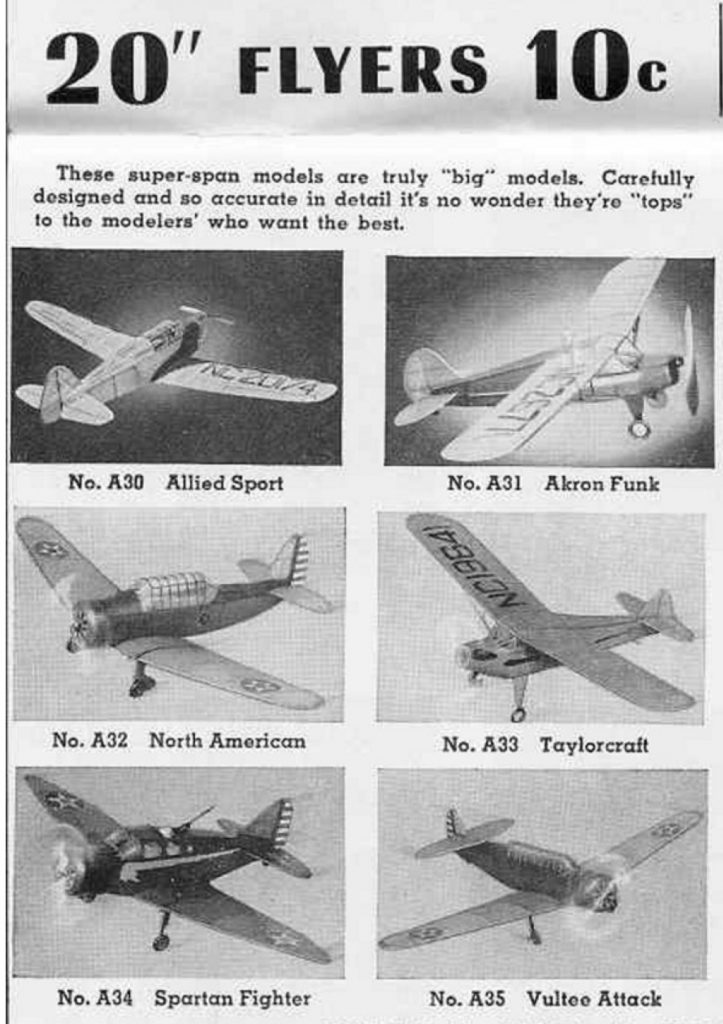