FINALLY, we get to go back outdoors for “big” contests, after missing all of last year.  Every June, the McCook Squadron (Dayton, Ohio) hosts a two-day FAC contest at the AMA Flying site in Muncie, Indiana.  It really has the flavor of a local contest, but it is showing signs of growing bigger.  There are only a couple of Dayton people still attending (old age is getting to all of us), but Pat Murray (Roscoe Turner Squadron) and the Cloudbusters have agreed to do all of the contest day legwork, while the Dayton crew manages the prizes and awards.  We have always enjoyed the opportunity early in the year to get back out on the big sites – and we (usually) can use this contest as a tune-up for Geneseo (not happening again this year).

So, after a year of COVID Cancellations, it was great to get back outside and meet up again will all of our flying buddies.  We even had distant flyers attend:  Wally Farrell from Virginia and Dave and Ann Niedzielski (EasyBuilt Models) from Alabama.  What happens after a year off?  It turns out that some of us are a bit rusty.  We “forget” how to fly and we tire easily.  That might be from the aging process or lack of regular activity over the year.

I drove down on Friday morning and discovered that Pat Murray and Clete Schenkel had already been testing since the day before!  The weather prediction was a mixed bag:  the temperature and general conditions looked to be great, but all three days proved to be windy.  I am sure that the wind curtailed participation in many events.  Still we did manage to fly 19 official FAC events, three McCook specialty events, and two AMA events.  All of the FAAC events had at least three flyers, so we awarded plenty of kanones (especially to Wally!).  Two of the McCook events (Sky Bunny Memorial, Cloud Tramp) had many participants, and the McCook Watson Challenge and AMA P-30 only had one flyer.  Frank Scott (Dayton) created the Sky Bunny Memorial and had a perpetual trophy made and gave out Sky Bunny mugs to all Sky Bunny flyers.  He created a target-time event which Wally Farrell won and took home the perpetual trophy.  Of course, Frank and the rest of the Dayton Crew created Award Certificates and the coveted “McCookies” for the winners. 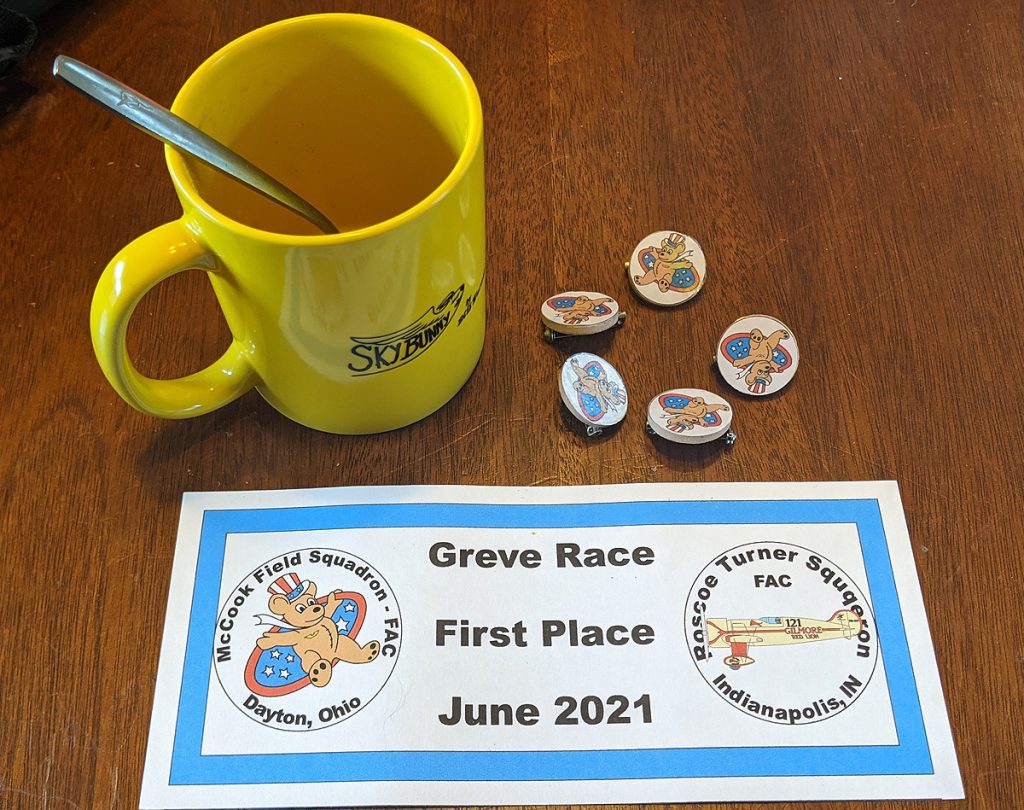 My mug (already used!), a handful of “McCookies”, and a First Place certificate

My adventures started out well enough.  I test flew a few new planes on Friday, including my Three-Night P-30, my HepCat Old Time Fuselage, and my brand new Holy Ike Old Time Stick.  I tried a couple of other models, but really was just there for fun and relaxation and easing back into contest flying.  I stated earlier that I had brought 27 models for 22 events.  That proved to be too optimistic – at least I was prepared!  Well, maybe “prepared” isn’t the right word.  I dislike making motors so much that I neglected to make new motors for my models.  Some models were able to fly on OLD motors (for a could flights, at least) but most required me to make motors on the field – ugh! 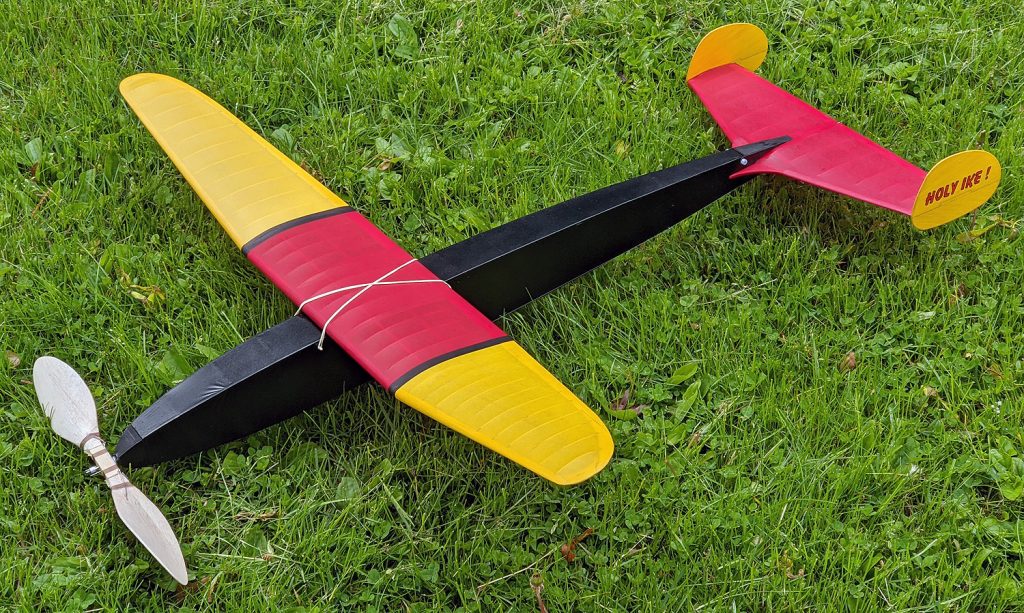 the Holy Ike when it was finished – BEFORE testing

My first issue came with my Holy Ike.  I gave it some low and medium power test flights and all looked great with right-hand flying and gliding.  I checked the trim, noted that the wing was about half a bay off of location and fixed that and I powered it up to about 60-70% and walked out to the (windy) flightline.  As I was getting prepped to launch, my thumb broke one of the lower longerons.  I felt it would be ok and I would repair it after the test flight.  I launched and immediately knew something was amiss:  previous flights had a steady and stable climb-out to the right – this went straight out and climbed up.  Of course it stalled, dropped its nose and went straight into the ground, smashing the fuselage back to the wing.  Post-flight analysis:  I had noted the wing was not located correctly.  I had marks on the wing indicating where it should sit on the fuselage, referencing each side.  Earlier, I had aligned the LEFT marks with the CENTER of the fuselage, thus the wing was mounted to the right.  I imagine the extra weight on the right had imparted a right bank, especially under the lower powered tests.  Shifting the wing back AND higher torque made eliminated that right turn resulting in destruction.  In addition, the broken longeron had weakened the structure enough that it could take no impact.  Also, I had built the fuselage out of light wood – too light for a large powerful plane.  This crushing blow was destined to happen when I framed up the model.

the Holy Ike fuselage AFTER testing

The sun and wind started to take a physical toll, too.  By the end of Friday, I was very tired.  As we got started on Saturday, I worked on my B-52.  I built this several years ago, and while it is somewhat stable in flight, it is very sensitive to disturbances.  I also thought I had it under-propped so I put on a larger wooden prop.  That seem to make it fly a little better.  In the end, after several test flights, I recorded a 30 second flight, and then a 55 second flight and as I applied a bit more power, the old characteristics came back and it made about 1/4 circuit and the power pulled it up into a bit more angle of attack than it likes and it stalled out and nosed in.  There was little damage other than a bent prop shaft.  I have it so it comes apart in pieces on landing, so damage is limited.  This stalling is probably due to the washed-IN wing tips.  I’ve tried to counteract that with tabs, but I think it is beyond hope.  And last week, I had reinforced the chin so it would be crushed again on a bad landing.  55 was my top score and, with the 20 bonus points, it was good for second – behind Wally Farrell’s fantastic Me.609 twin.  I probably won’t fly this anymore as I don’t think I can coax it to fly better than it is. 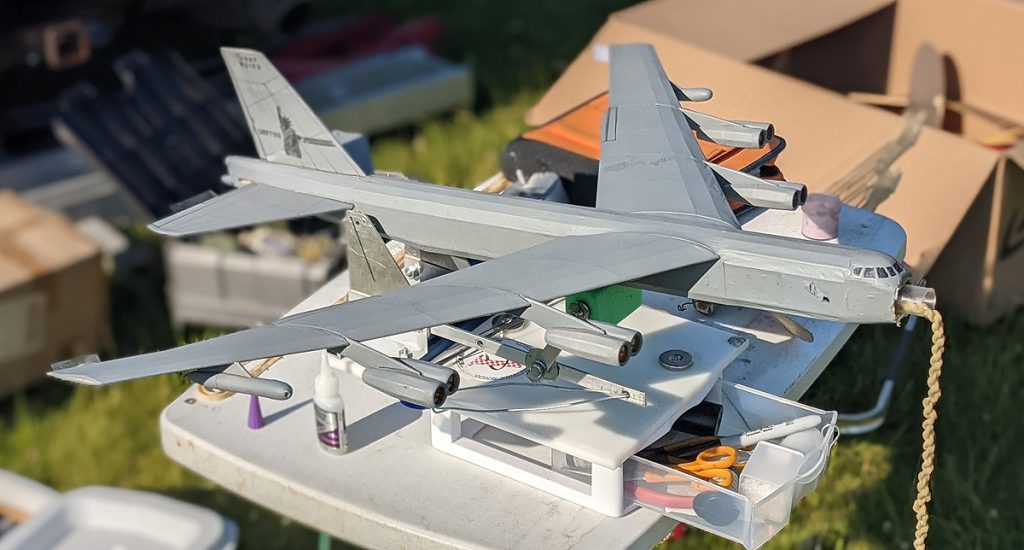 my battle-worn 30″ span B-52 awaiting another flight.

I also got to work on flying my new HepCat Old Time Fuselage.  I have only flown this in windy conditions, testing in April at Muncie with Archie Adamisin and then at this contest.  Testing on Saturday showed a significant nose-down in the glide.  I had previously added tail-weight, but felt this was more of a decalage issue, so I adjusted in another 1/32″ in the tail.  It now has about 1/16″ more than the plan shows, but it seems to like it.  I dialed in a slight amount of down to compensate and proceeded to wind up for officials after one more test flight.  In the windy conditions, I was able to log a triple-max (three 120-second flights) – the only one in OT Fuse – and was happy to earn the kanone with a great flying model. 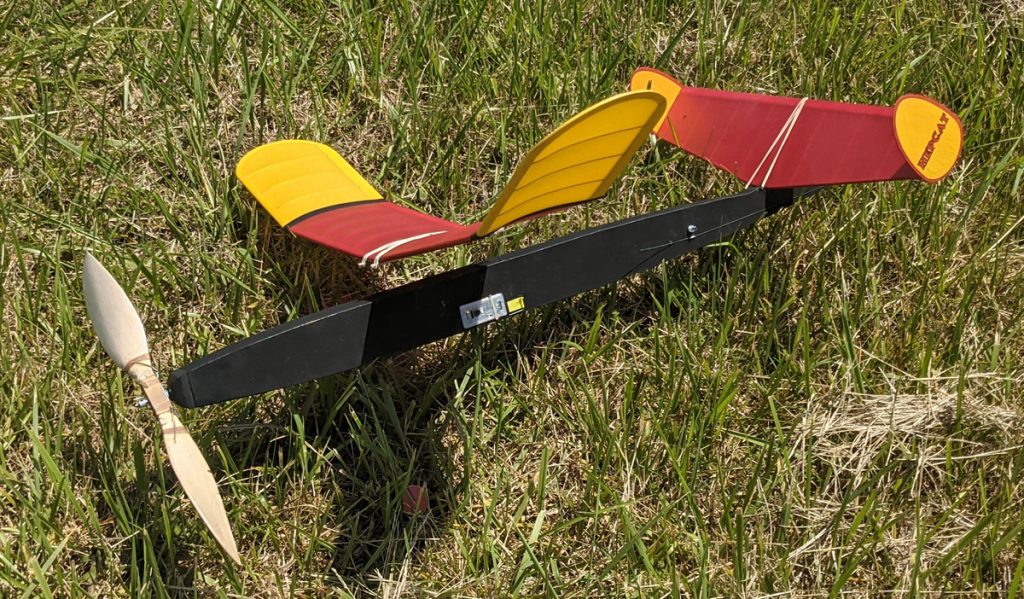 Saturday ended with a sunburn.  I am not a total idiot and I do prepare for the sun.  For years, I have used a bottle of Coppertone SPF8 lotion that really does prevent sunburn, even at that low SPF and my easily-burned paleness.  But, I ran out!  I also had a can of spray SPF 50, so I used that – only to end up burnt by the end of the day – grrr.

Sunday was more of the same wind – well, maybe.  Saturday seemed to have lift with violent kickouts – you’d get a little lift, but if you got to the edge, you’d get shoved down rather powerfully – very strange air.  Sunday morning was still windy but the thermals were more typical good lift and no violent back sides.  It was sunny until mid-day, then came overcast.  Wally Farrell was fortunate to fly his Canberra JetCat while the air was still providing lift and logged TWO 60+second flights – amazing.

I managed to win Peanut with my Yak-3 and my kit-prototype Cloud Tramp (built in 2013) won its FIFTH Cloud Tramp Mass Launch.  I figured it was doomed this year as the wings and tail are rather warped, but I guess they are warped in all the right directions.  I dropped my second flight with my Wanderer (108 sec) and therefore missed a potential 3-way flyoff in OT Stick (Pat Murray won with a Korda C Stick).  I came in 2nd in the National Air Races with my Comper Swift.

It was great to be back out flying, but I was unprepared.  I didn’t leave anything at home this time (excepting more sunscreen), but I should have made motors and actually checked all my models.  I didn’t fly Embryo or 2-Bit, I just didn’t have time.  But Muncie is my favorite field and time flying there is better than time spent in most other places.

1 Response to Flying Outdoors Again! the McCook at Muncie Contest