First, the build, then the flight report, with video, below.

In the summer of 2019, before we all had other worries, we witnessed Gene Smith win the FAC Modern Civilian event at the 2019 AMA Outdoor Nationals at the Muncie flying site.  Gene’s model was nicely done and light and put in very nice flights.  I asked Gene if I could produce a short kit from his design and he said sure and that he would send plans to me.

I was a bit surprised when he sent me…sketches – haha!  But I pushed through that and took my time to draw up all of the half-shell formers, keels, and stringer notches.  I wasn’t sure how it would turn out, but when it came to building, I only had to make three or four very minor changes to the former designs. 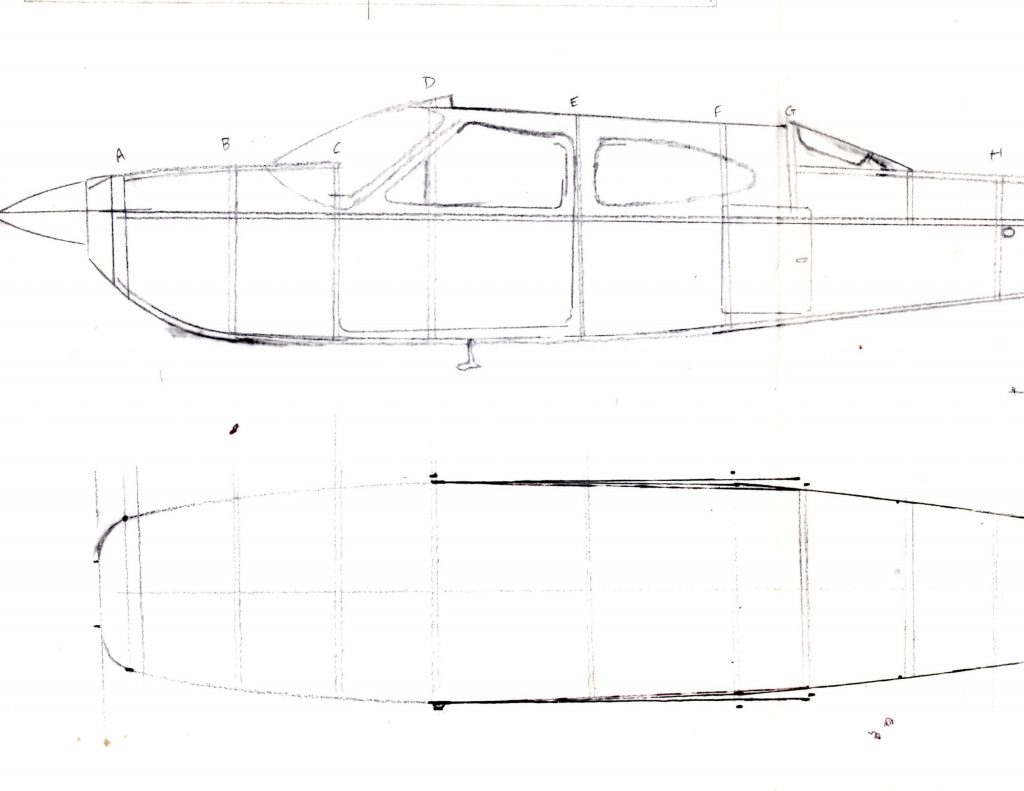 I started this build in January, knowing that I was building an Outdoor model during Indoor season.  As I laid out the keels, I noted that they are narrow.  Were they too narrow?  So were the formers.  I had cut my prototype set out of pretty light balsa and I had to be careful as they broke on the grain very easily.  I added comments and notes to the plan showing how to reinforce them where the grain made them weak.  When I got the keels laid out and started placing the formers, I was pleased to find that they all fit just right.  Even the side keels, with former notches, matched up fine.

I only put on one side stringer to hold things in place hoping that it wouldn’t pull the keel & half-shell structure out of “straight” – that worked, too.  I glued on the other half formers and the side keel and side stringer.  Everything was straight.  I started adding the remaining stringers in pairs – first one side and then the corresponding stringer on the other side.  Where the curves were very tight, like on the underside of the nose, I moistened the outer side of the stringer to make the straight stringer bend (to my will – haha).  Historically, I don’t like Keel & Half-Shell construction, but they do come out nicely, maybe even lighter.

I quickly got on to finish the fuselage and then built the easy parts – the tail and the wing.  I found a full-scale ship to model and set about creating a printed tissue set for the build.  This turned out to be a challenge, even for this simple design, because I had to cover the curved fuselage is sections and had to match up (or try to match them) the panel lines.  The result wasn’t perfect and had plenty of tucks and errors, but it turned out fine.

The windows – and there are plenty on this model, were critical to the appearance.  Gene didn’t include any details about the windows.  The sides are not too bad, but they do take up a bit of space.  The construction, unfortunately, does have one former going through a window.  I probably could have solved that, but just ignored it.  The sides are basically flat and I glued tissue to plastic (with spray adhesive on the cut out tissue) and then glued the plastic to the frame (with canopy glue). 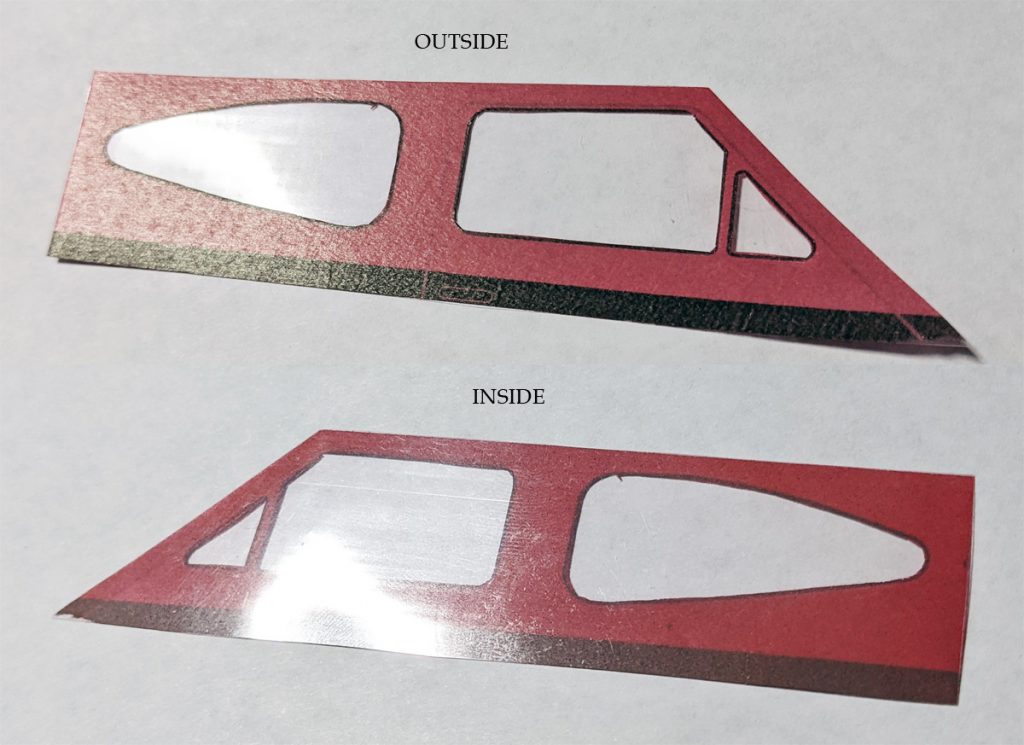 The rear window on the full scale is nothing but compound curves.  I could have done a canopy for the rear, but it is small enough that it can be represented with a flat piece of plastic wrapped around the fuselage.  I glued tissue to the plastic, glued the top edge to the frame, then wrapped it around when the top was set.  I think this worked out just fine.  I feel I tapered the window cutout a little too much, so I widened the base of the cutout on the plan. 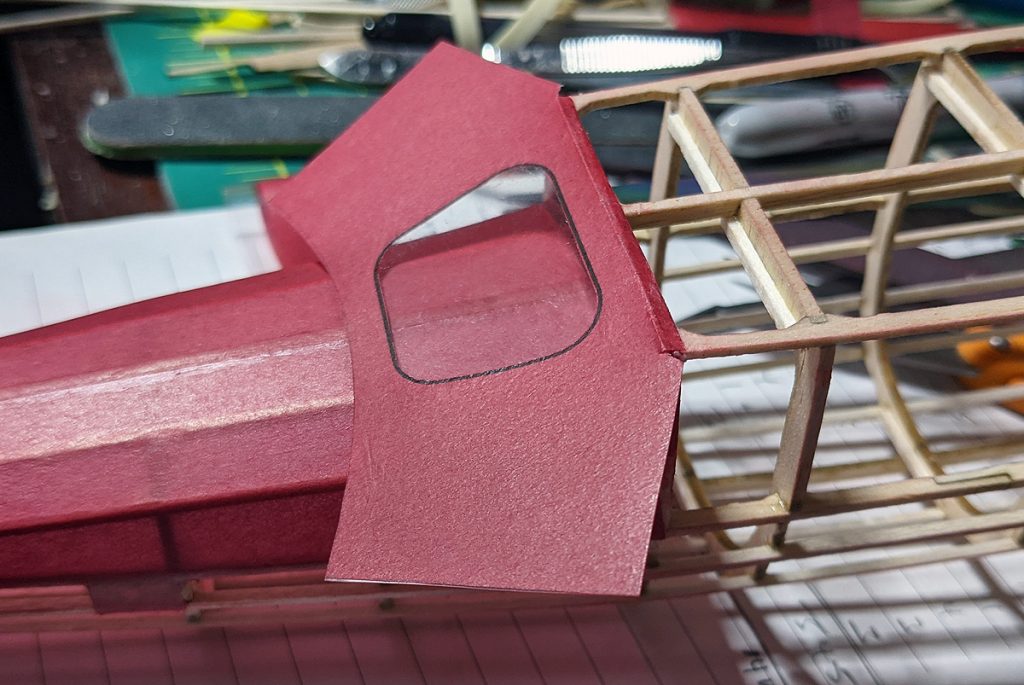 The front window could be done in the same manner as the rear window – a flat piece wrapped around.  I’ve done that before on a similar model (my Jumbo Stallion – see pic), but the 3-views and full-scale photos just show too much of a compound “bubble” to reproduce that as flat.  So I tried to model a buck in 3D, but just couldn’t get it right and asked Archie Adamisin if he would take my basics and create a good file that I could print.  He did a great job, thanks Archie!  I printed out the buck, sanded it smooth, and then cut it apart!  It was just a little too large for my vacu-former.  Actually, my design produced a buck that was overly long;  It could be redone, but this will work out. I pulled several as a test and then pulled on that I would use on my model. 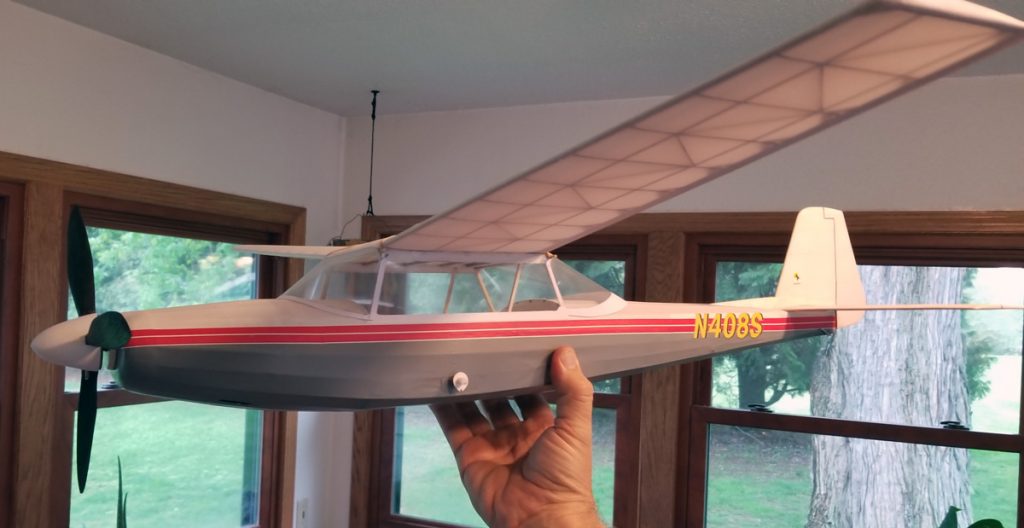 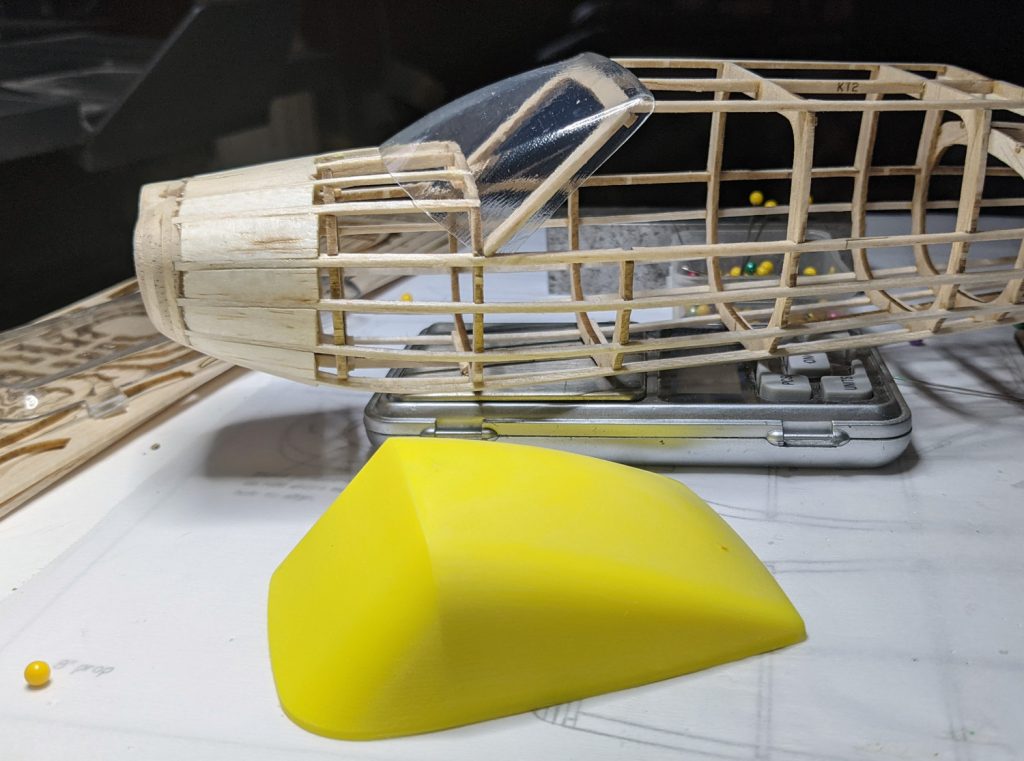 I covered this model in a different order than normal (for me).  Normally, I start on the bottom of the model, then I cover the sides, and finally the top surfaces.  If the length requires two pieces, I start at the rear and go to the front.  In my mind, this make the overlaps less visible – the sides cover the bottom and the top covers the sides – and the front pieces cover the rear pieces.  Because I printed the tissue on this model, I had to do everything differently.  I had to put the rear turtle on first, so I could put the rear window on.  then I put on the side windows (with the sides windows overlapping the rear window edges), then the top cowling.  I did the bottom next, but found that the landing gear openings would wrap onto the sides (I cut them off and pasted them on later).  There was enough compound curvature on the sides, that I had to cut the pieces into a front piece and rear piece (this messed up the printed lines) and also had to make snips to handle the compound curse (these made tucks in the tissue).  Ugh – It doesn’t look very good, but it is all covered!

Oops, I forgot to mention – I was printing on red Esaki and if you know red Esaki, then you know it has as bluish tinge to it.  I bought some Pan Pastel Red chalk and rubbed it into the back of the tissue.  It really didn’t change the front much, but the back was now red.  i hoped it would come through after sealing, as my full-scale choice is bright red.

Then I did something I have never done in all my years of modeling:  I used dope on the model!  I broke down and purchased some Randolph Non-taughtening Nitrate Dope and matching Thinner.  I measured it out 50-50 into a glass jar and brushed it on.  One coat for the Fin (which had been damaged after covering (grr…), two coats for the wing (the wing also has two puncture holes in it! double grr…) and horizontal, and three coats for the fuselage.  The red chalk came through a little bit, but maybe I should have tested the red chalk on white tissue.  Of course, Design Master Carnation Red spray would have been perfect, but then my black stripe would have needed to cut and applied afterwards – ugh, choices.

Moving on, I decided to go with a stacked prop – I chose a 7″ x 9″ pitch.  I use this size prop on Embryos.  What’s the connection?  Well an Embryo is 50 square inches and my Outdoor Embryos weigh in at about 20 grams (and fly well on a loop of 3/16″ rubber).  This Cessna came out light at 20 grams and has 66 square inches, so I thought a 7″ prop would be ok.  I also printed a spinner.  I finished up the prop and spinner at about 9:30pm on the night before the contest.

I was nervous about taking a model of this size to an Indoor contest.  I’ve seen Paul Boyanowski fly many larger models indoors, but for me, this is something new.  This would be the largest and heaviest model I have attempted to fly inside.  Even as large as the Ultimate Arenas facility is, I know very well how hard the walls and ceiling girders are – they are unforgiving.  Heavy planes can and will sustain damage.

I got to the facility a little early.  I got set up and got the Cessna out before anyone was there.  I had put a short loop of 1/8″ in it – maybe it would be under-powered, but it wouldn’t be overpowered and zoom into the hard boundaries of the building. I gave it a few test glides and added clay to the tail to get a good glide that still remained a tad nose-heavy.  I put about 500 turns into the motor and gave it a very cautious toss – wow, it flies!  I tweaked the Gizmo Geezer nose button for just a little down and a little more right and wound it up to 1000 turns.  As you can see in the video, I was rewarded with a very stable 54-second flight!  Truly amazing!  This was all before the contest started and I didn’t really care how the rest of the day went – it was a great success.  I must say that if I had crashed out of every event I would not have been very happy, but I didn’t and how well or poorly I ended up in those events was certainly eclipsed by the flights I had on this brand-new airplane.  My best flight was 88 seconds on 1900 turns on a longer motor.  I am probably stalling out a little on the high-torque launch and that can be trimmed out.  And if I can carry slightly more weight, I can put in an even longer motor and break two minutes indoors.  Oh, I won FAC Scale with my 88 second flight – a win on the first day of flying is always a good thing! 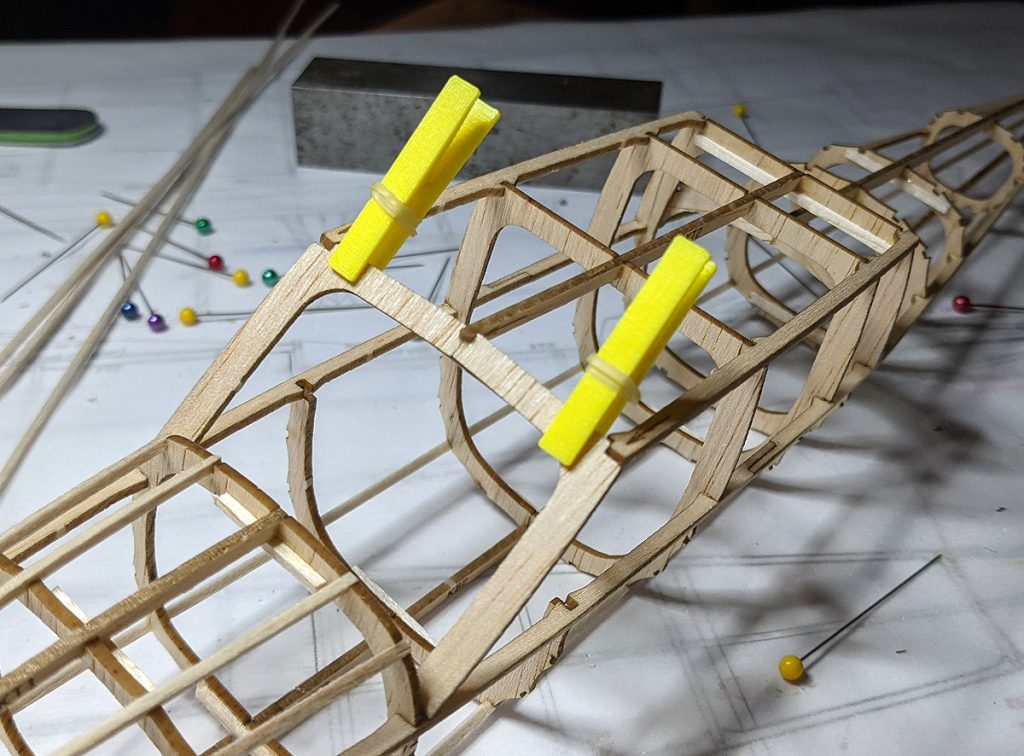 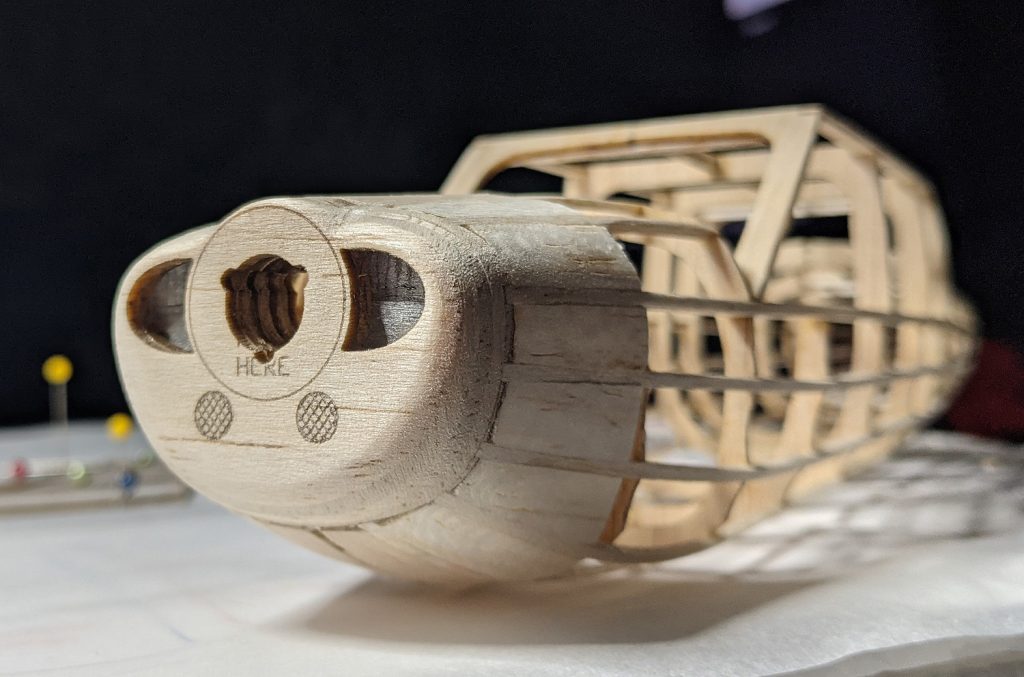 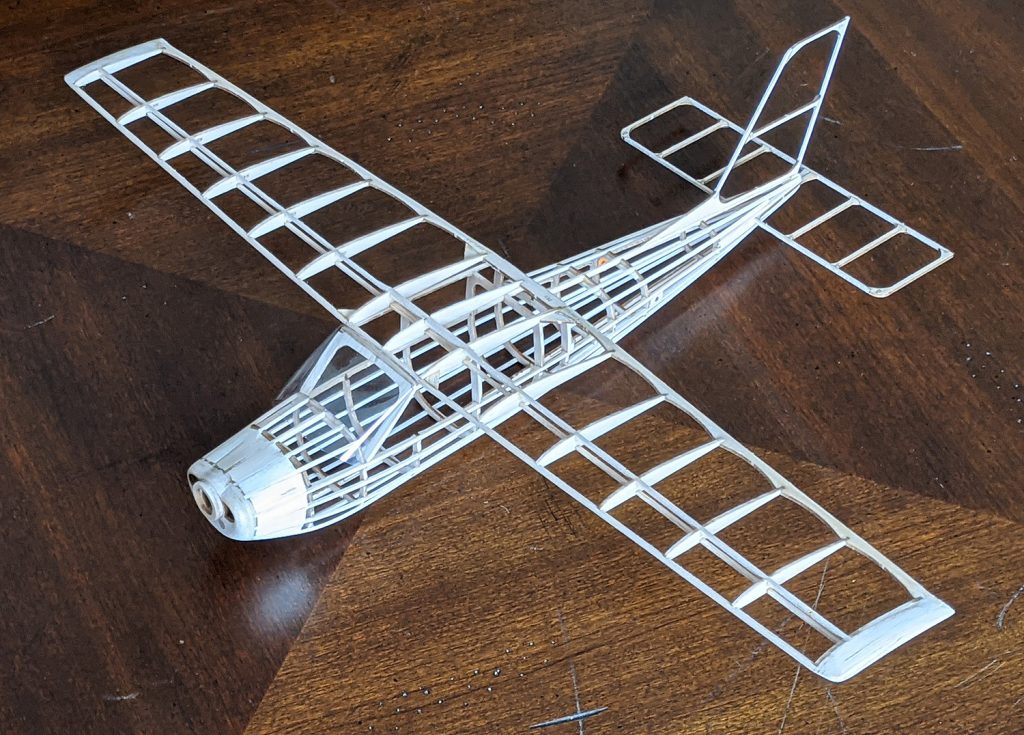 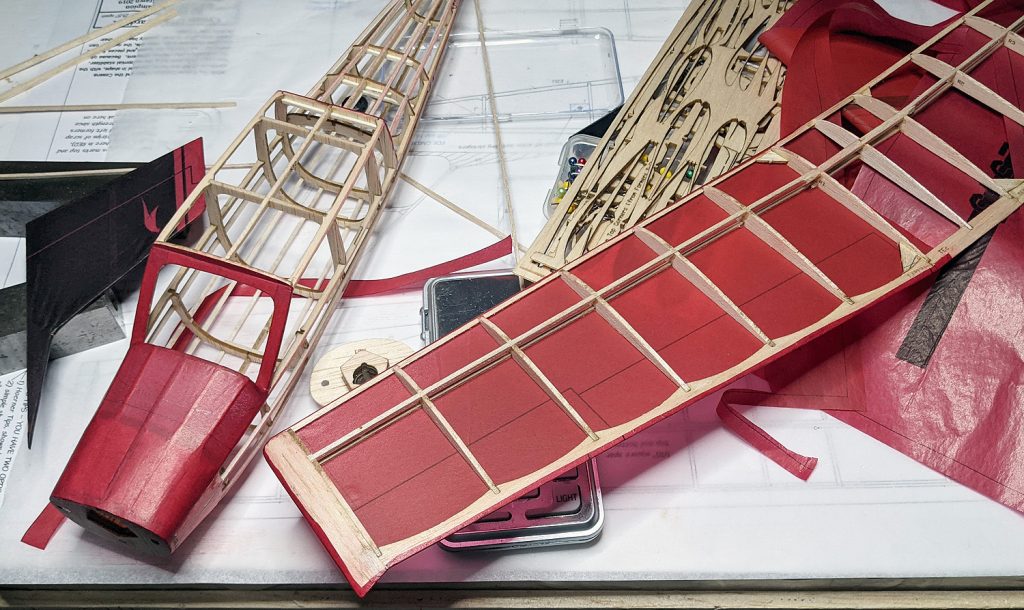 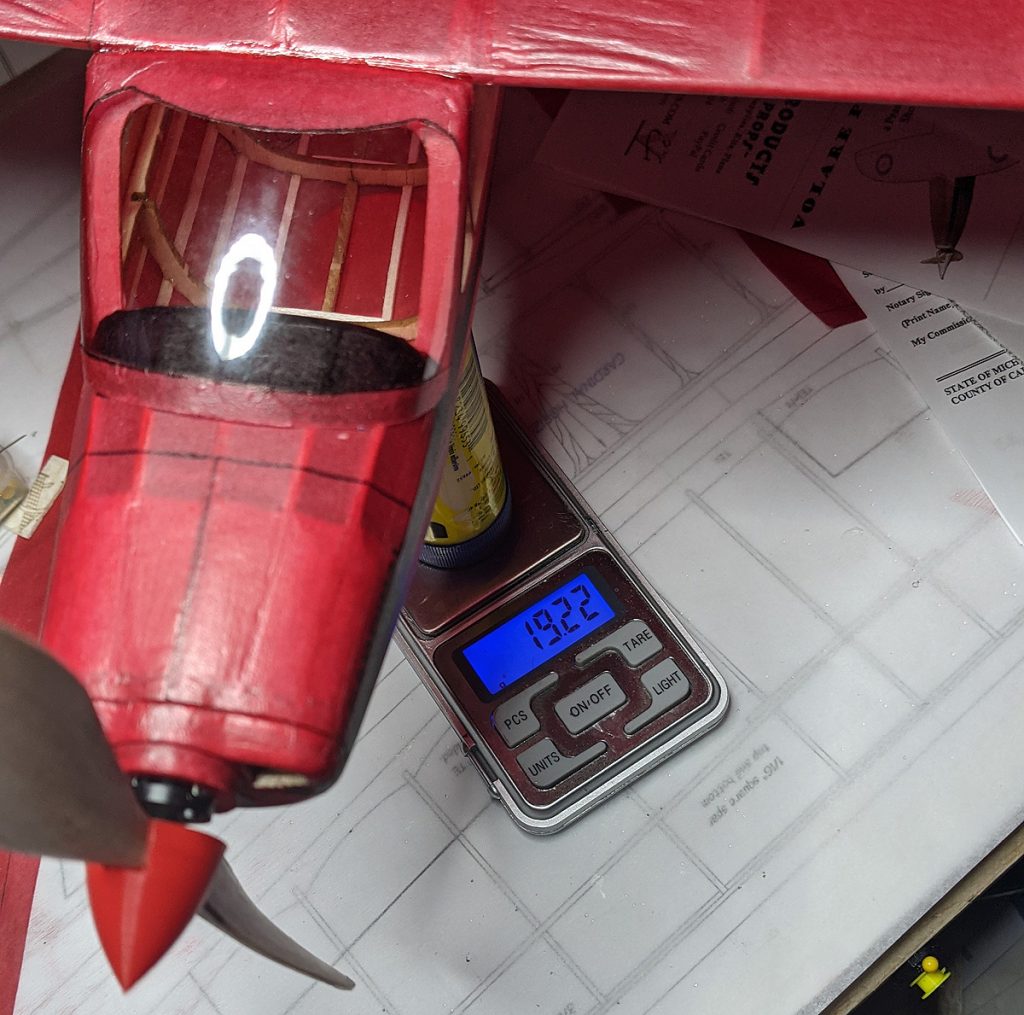 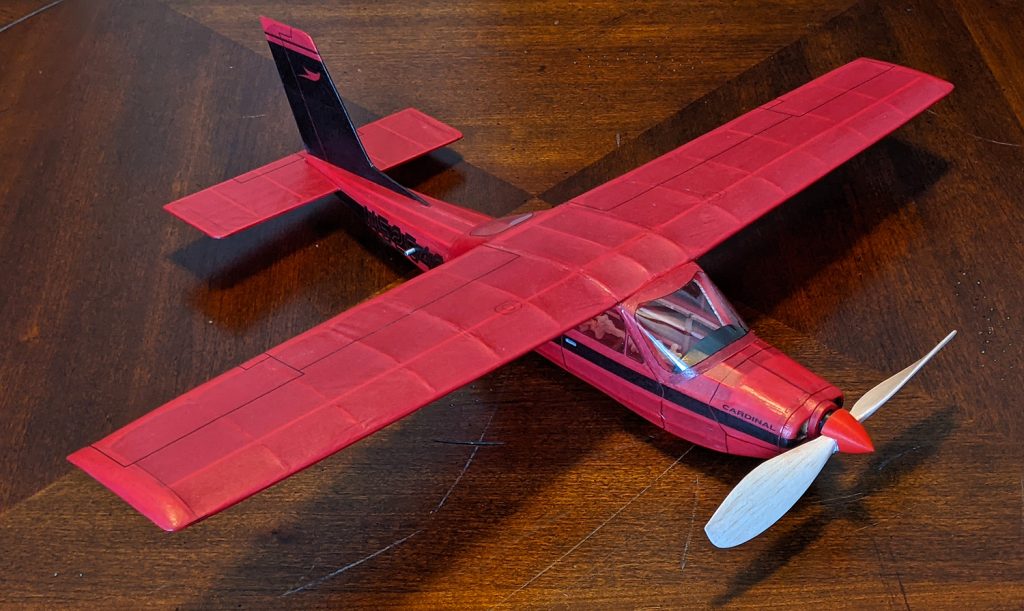 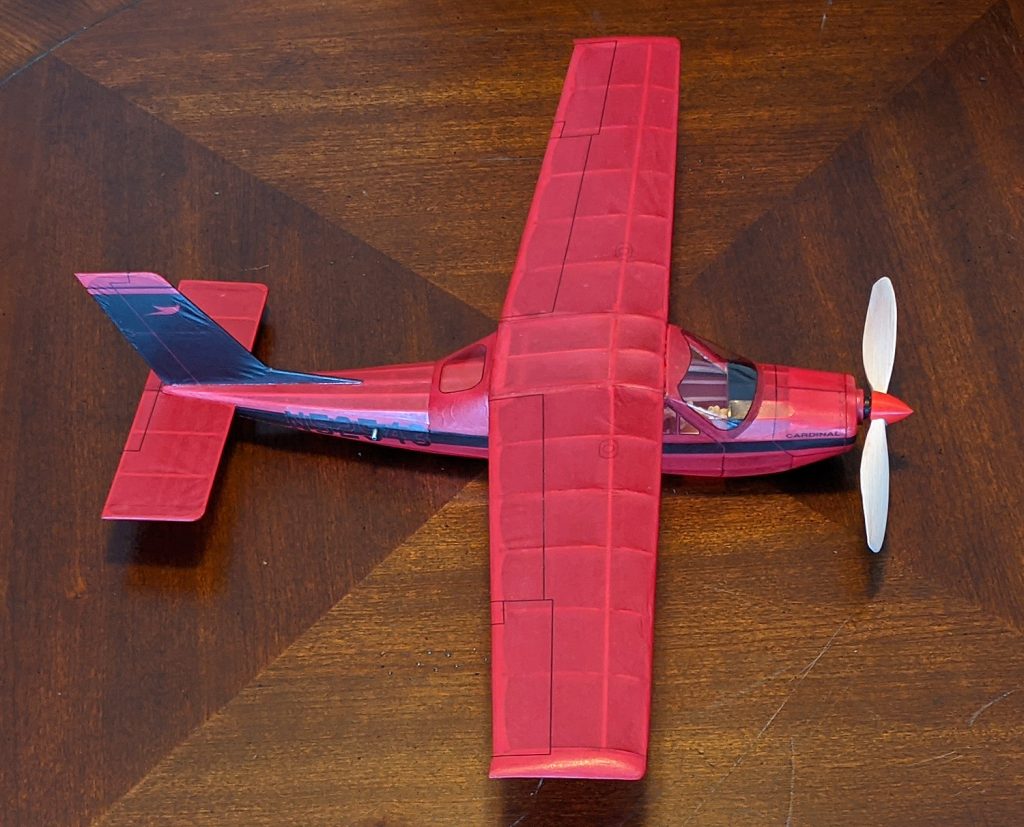 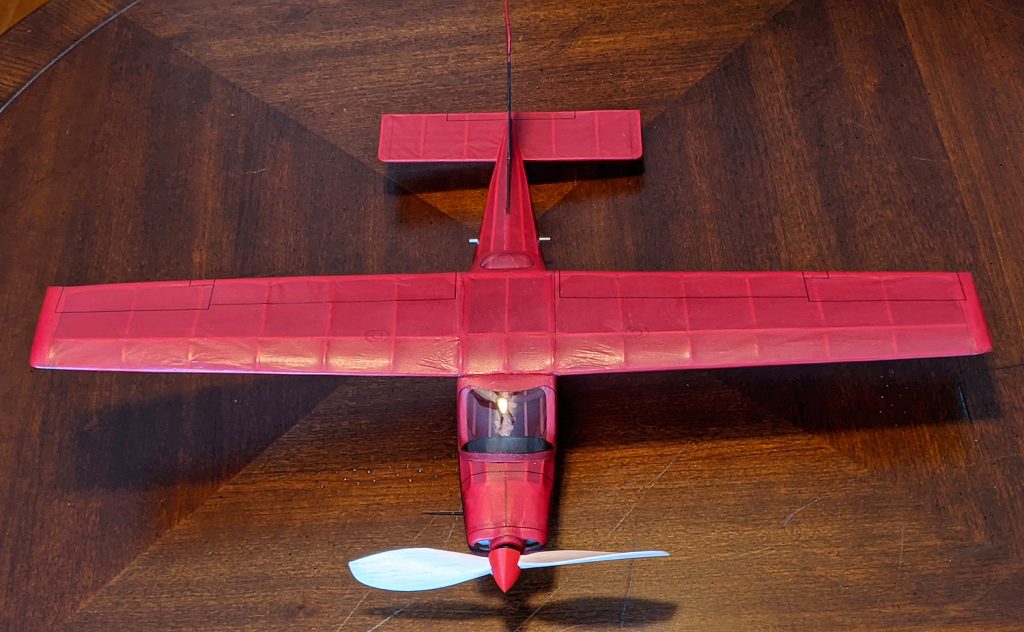