From the Contest – Report on F-86 and Other Fun

First, contest fun, then a report on the F-86 and its high point and low points.

As I posted elsewhere (Cloudbusters Facebook page), we had a great day for the June Contest.  I covered the general report there, but will give some of my personal highlights here.

My Flying Aces Sportster had a little assistance (light thermal) and clocked a 71-second flight.  It went off the field and came down on the road, as seen here.  There was no damage. 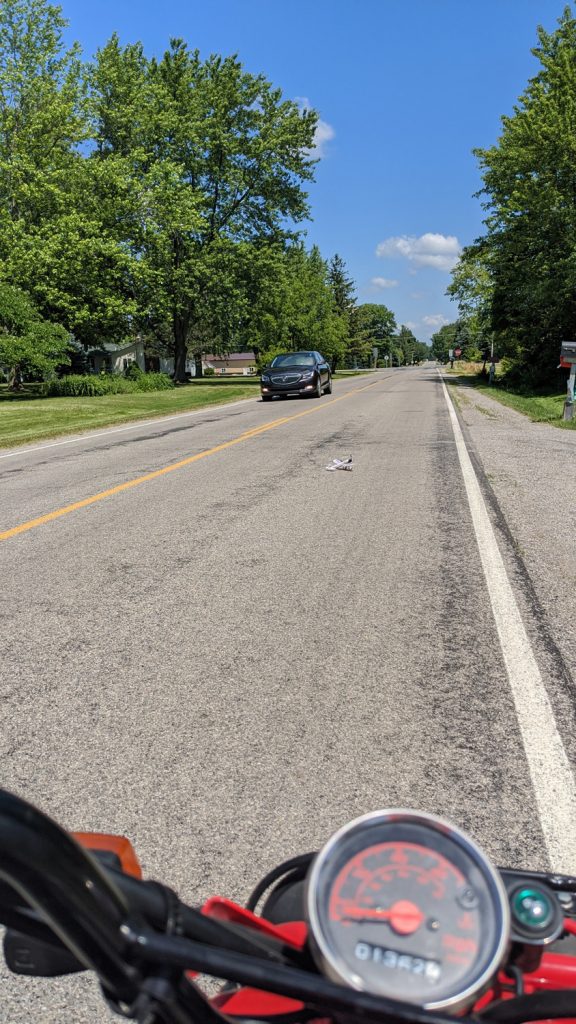 FA Sportster in the road!

My 5-year-old Peanut Fairey Barracuda pulled out a win in the WWII Combat Mass Launch.  The loop of 3/32″ rubber is too powerful – at first.  There are many aerobatic maneuvers performed as it struggles to find a stable pattern.  After about three high-powered circuits, zooming and then skimming the grass, it finally settles into a circuit and climbs up for a long cruise followed by a great glide pattern.  That’s six kanones for the little model that was smashed at Muncie years ago, five of them in WWII Combat. 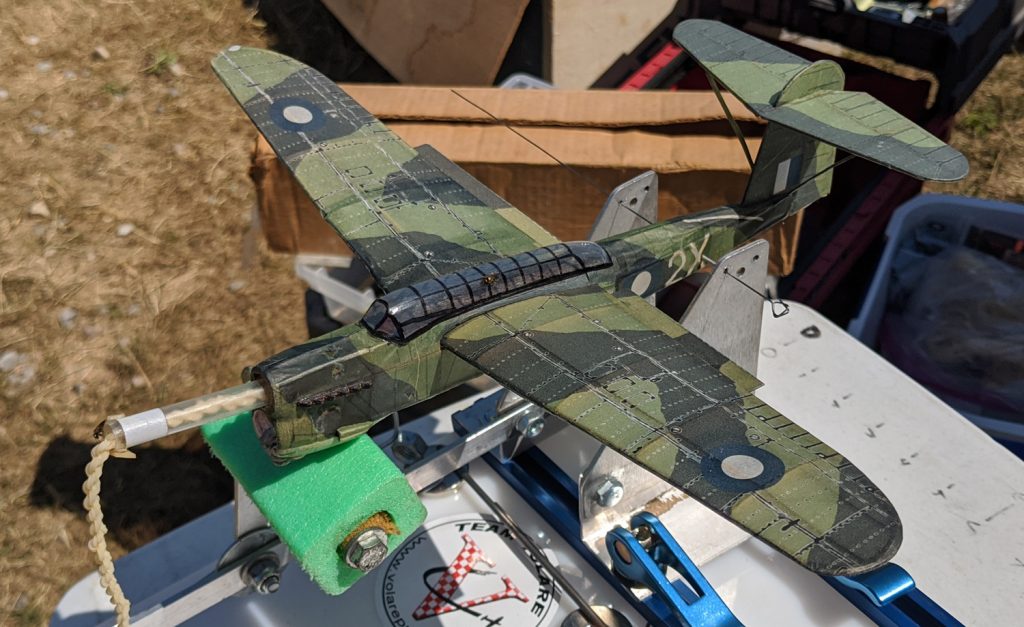 I brought my Elmendorf Special for the Races Mass Launch.  I built it for indoor, but had some prop issues in test yesterday.  I had brought my 24″ Caudron C.460 because I had repaired it and it was ready to go.  But it is a “big field” flyer – it does huge circuits and need lots of space.  When I won at the AMA Nats last year, I was really torquing it up and it has a beautiful glide and would have been lost (instead of smashed) if it had not had the DT on it.

Well, when the Elmendorf was acting finicky, I decided to give the Caudron a try.  It still has the year-old motor in it that had one knot in it already.  I gave it a test flight with less than half torque and decided I would fly it in the races if we launched from somewhere that would allow the long cruise not to go over woods or neighborhood.  While winding for the test flight, I got another broken strand and tied a knot.  Here is where the test flight landed. 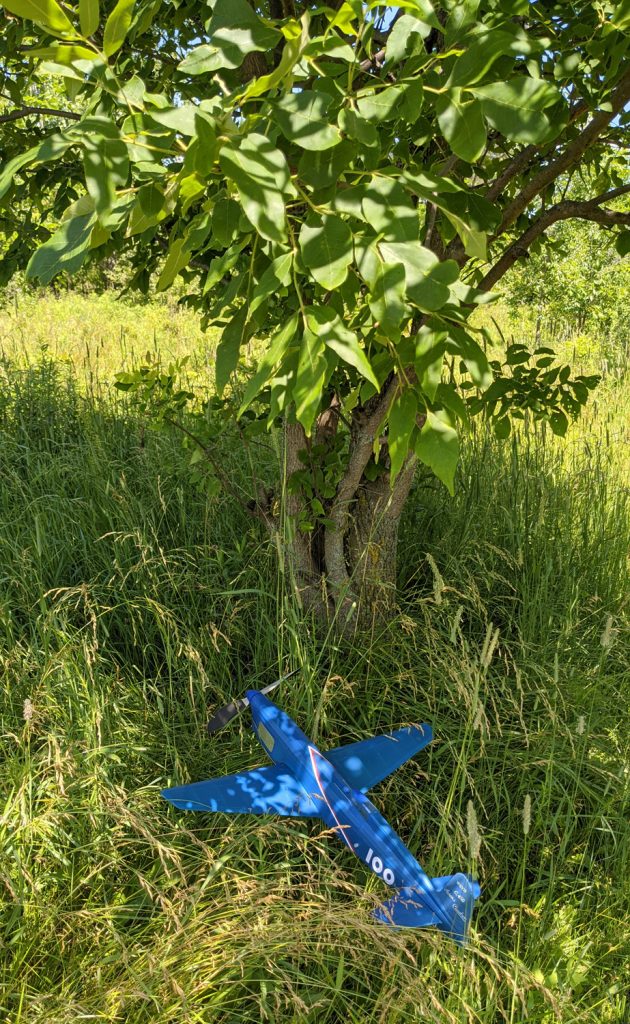 It didn’t hit the tree, just landed there.  Strangely, I had three planes throughout the day land withing 10 feet of that tree – my Heinkel JetCat, the Barracuda, and the Caudron.  All were launched from different locations and all have different flight characteristics, and to my knowledge, no one else went in that direction all day.

With about half of full torque, the Caudron easily made it to the second round of the Races.  Because I am pretty much launching at cruise power, the model never climbed very high, but did its stable circles and gentle glide.  All of the time the two Cessna C-34s of Ron Joyal and Winn Moore were climbing out high and looking like winners.

Back at the base while winding for the last round, I started talking smack to Winn.  We pit right next to each other and that is typical of our contest banter.  I would say things like “man, I’m packing in the turns this time” and “wow, look at that torque climb!”  The reality was, I did put in more turns, but my torque still was only about 70% of max torque.  I just didn’t want to lose the model.  On the way out, I decided to use the DT.  It is an electronic band burner, and I turned it on on the motor-bike ride out to the launch point.  When we got there, it had actually counted down and burnt the band.  Fortunately, I had two dental bands looped together – it only burnt the first and I was able to stretch the second enough to set the DT.

We launched and went up together.  The Caudron still was not getting the altitude of the Cessnas, but that was ok with me.  Ron’s came down and mine was cruising.  I had added a small blob of clay to (hopefully) prevent porpoising and that was, indeed, lessened.  Winn’s plan and mine went in different directions and his was much farther down field than mine.  As mine hit the ground, I hollered “DOWN” in their direction and would rely on them to tell us (Chris with the scoreboard and me) who won.  Winn’s model was lost in the trees, but both Ron and Winn reported that it had gone in while mine was still in the air.  Two contests, two victories.

Our home field (Alkay Airport) is long but a little too narrow for my comfort and I rarely fly my “big field” models there – I’ve lost enough models at Alkay and don’t want to risk my big ones.

Maybe some of you had to plod through the above (or just scrolled past) just to get to this part.  I know there is interest.  I decided to build an F-86 – they are one of the cleanest designs.  I had thought about doing a John Glenn F-86 (as an Ohio boy, he was a childhood hero), but I found this striking livery of the late 50s Italian Air Show crew. 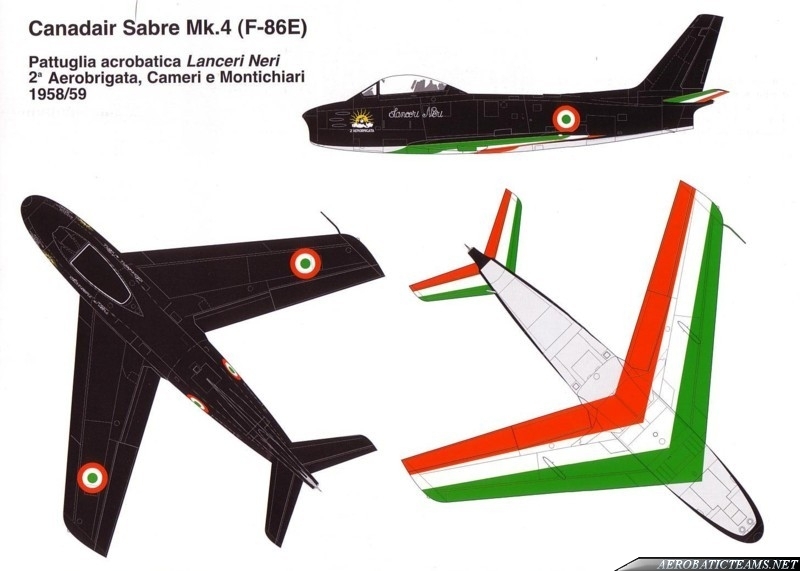 I designed and cut out some parts and then worked (for an inordinately long time) laying out tissue prints.  Confession: I did use light wood for my version.  I am solidifying my various techniques and think I am pretty set now on how I will be building JetCats.  They all have a laminated fuselage.  This starts with a 1/16″ sheet center, with an inset carbon fiber ribbon for flex resistance.  Also, there is a 3D-printed nose hook that is keyed into the balsa.  This “spine” is cut with the grain going in a certain direction and the laminating sides are cut with the grain going in a different direction (the parts are angled on the balsa sheet, as the sheet dimensions permit). 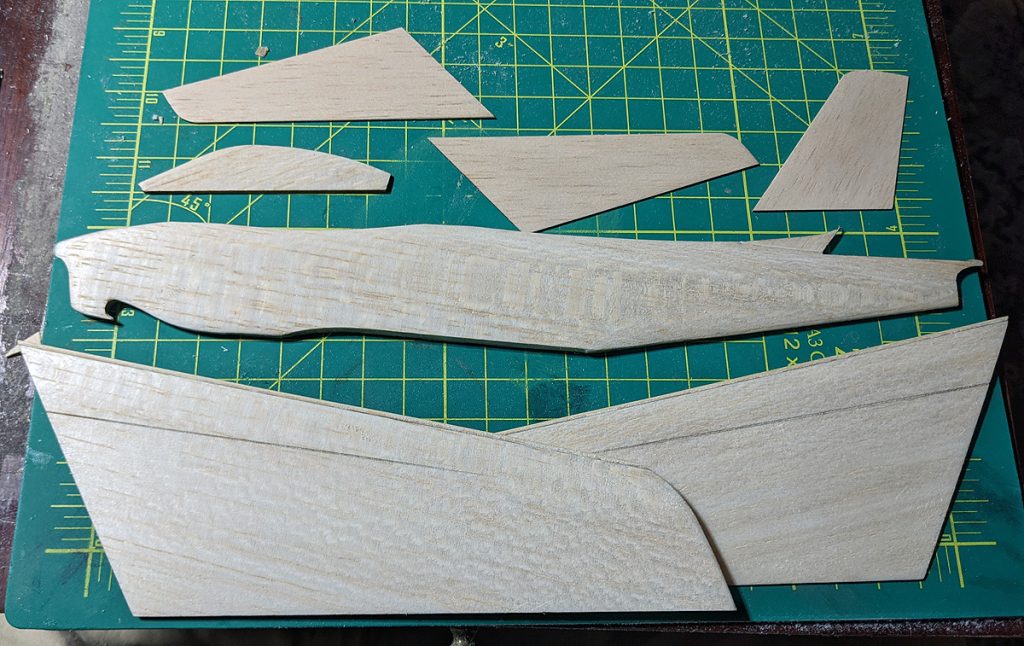 I’ve had difficulties in the past with these laminations.  The first several iterations used CA – but CA is heavy and not forgiving as to locating the parts and adjusting.  I’ve used wood glue.  It is lighter than CA and much more forgiving regarding the alignment, but it can warp the wood and requires weighting the assembly, which is either not enough or shifts the pieces.

This time, I thought I would try something different and it seems to work well:  spray adhesive.  I used Gorilla Glue spray, but I don’t think the brand matters.  I sprayed the center and located one side and pressed it into place on a flat surface.  I then sprayed the other side of the center and placed the other fuselage side.  It worked well.  I suppose you could spray both sides, if you were worried about the glue holding. 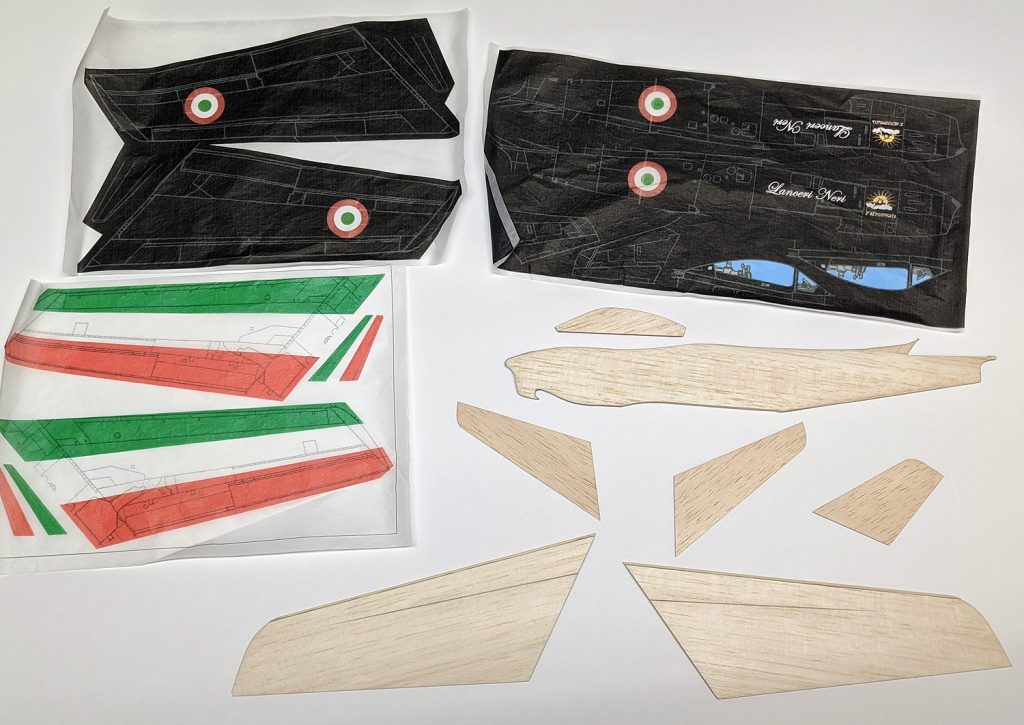 I used the same spray for the printed tissue.  That was a little more critical regarding placement – you can’t really pull up the tissue after you tack it down.  I made sure reference points were properly set and then started at the center of the piece and rubbed outwardly to smooth the dry tissue over the sprayed panel.

After it was fully assembled (I was going to do the individual pieces but got carried away), I sprayed the entire model with a couple of light coats of Rustoleum Gloss (again, I don’t think the brand name is critical).  As you can see, it looks great – maybe my best JetCat.

In my backyard on Saturday, after I completed the model.  I could only go about half-pull on a single loop of 1/8″ rubber.  My yard is surrounds by trees.  Either I can get stuck in the trees, go through the trees into a creek, or go over the trees – never to be seen again.  This model, right off the board, would go straight and true on a hand toss.  Under very light pulls, it would arc up, flatten out and go into a flat spin to the ground.  I added what turned out to be 0.3g of clay to the nose and got wonderful flat glides – right into the trees, nearly every launch.  It’s really hard to trim a model when you can’t fly it.  But the promise was real.

At the field yesterday, I could finally put some power on the model.  It arcs up and transitions at the top and glides pretty well.  I did add a bit more clay, but this seems to be a little touchy (what JetCat is not touchy?) as the glide is now slightly nose down.  But the model is very reluctant to turn in glide.  I tried gurney flaps here and there but they made the model do violent snaps under power.  It tried weighting the left wing tip, only to induce the spin again (I realized that the wing tip is behind the CG – I was shifting the CG by quite a bit).

So here’s the conundrum:  The glide is very stable and floaty (but it won’t turn much).  The launch seems to have too much arc – it’s too tight for my liking – so altitude is limited.  If I could get it to go higher and get it to circle in the glide, I just might have a pretty good JetCat.  Any ideas?  By the way, my top three times were 20, 19, 17 – so it does fly.