A “New” Embryo – the “DeHavilland Discard” (or Bristol Bullhorn)

Two weeks ago, while I muddled about my house, trying to get re-motivated, I read the McCook Squadron’s latest newsletter.  In that issue, was a plan for an Embryo designed by Frank Scott, way back in the very early 1980s.  (Thanks to Mike Smith, editor, for thinking to publish the newsletter on Facebook and via email – I never would have seen this model.)

This was inspiring to me, for several reasons.  I am glad to see Frank come back to the FAC; he was an inspiration to me when I was starting out, as the CD of the Dayton Sector Skirmishes (contests) at Wright-Patterson Air Force Base.  In fact, my first kanone was won at one of his contests.  Frank would also write (and have published in the FAC News) the occasional fictional story (Hysterical Hystories – find them in the FACN Back Issues – you might check the News Index) of the adventures of Captain Derek DeBris in the spirit of the old stories in the original Flying Aces Magazine – this model was attributed to Derek DeBris!  Looking at the plan, it has fantastic proportions – a 17.5″ long fuselage and a 20.5″ wingspan – and it is all square construction.  Even more fantastic, it has retractable landing gear!  Who can resist this much fun? (much more story below the photos!)

my new (2020) build of the DeHavilland Discard 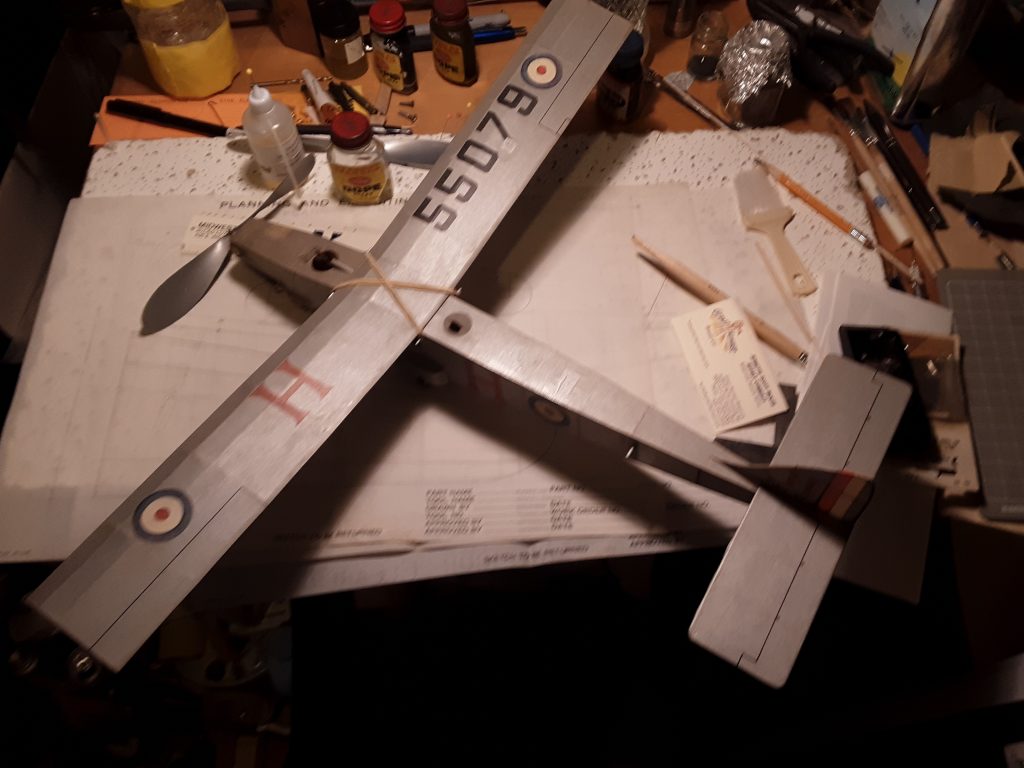 Check out my BUILD article (click HERE) – complete with VIDEOS!

I asked Frank if there was documented history on the model, which he called both the “DeHavilland Discard” and the “Bristol Bullhorn” from the DeBris Model Works (note, in the spirit of Derek DeBris, these are not actually scale models, they are fictitious – these factories never built these planes (except the DeBris Model Works DID build the models).  He told me he had none, – but I was able to dig up the “true” history and Frank verified that it “was exactly how the Discard/Bullhorn came to be”.

Before we get to the story, Frank and his son Chris built these models in the 1981/82 time frame and and Frank reports one of them flew OOS at the 1982 FAC Nats. (story below the photo!) 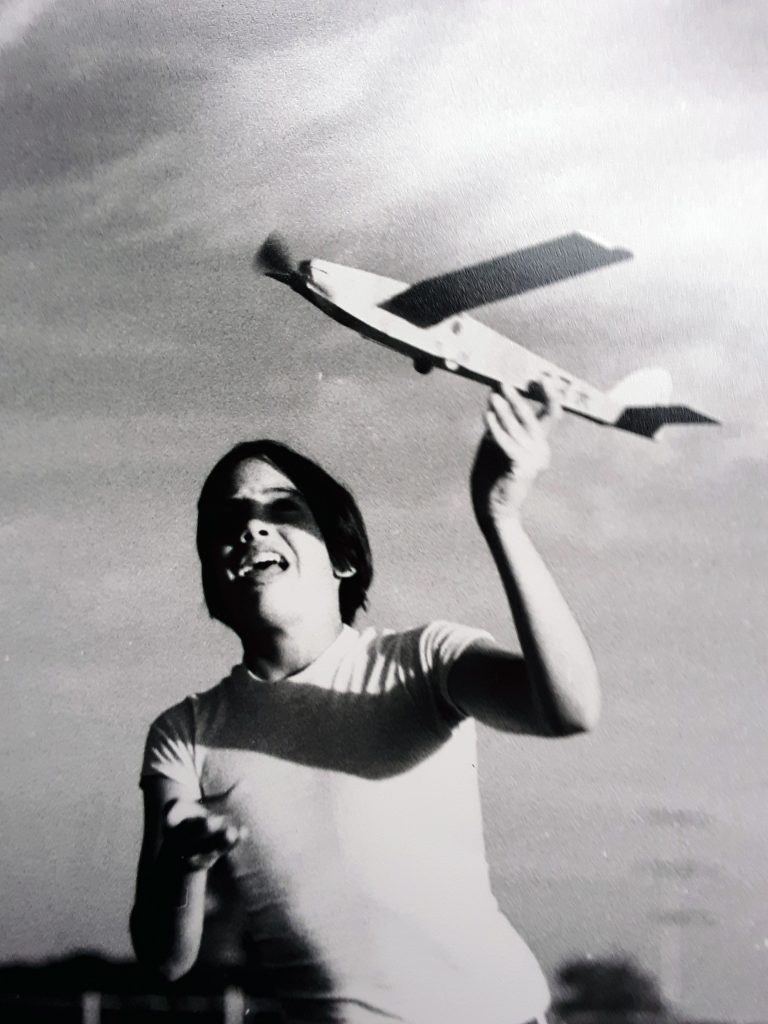 Here we go – the Hystory of the DeHavilland Discard and the Bristol Bullhorn (discovered by George Bredehoft and verified by Frank Scott):

At some time in the 1930s, some young engineers at the DeHavilland factory were inspired to work up an internal proposal for the upper management. They did not have tacit approval to work on this project for a light transport, but were able to cobble together a simple (and low-cost) aircraft after-hours from excess and scrapped parts. This is how the one-off DeHavilland Discard (from discarded parts) was born. Although it flew, the prototype was rejected for production and was pushed from one hangar to another and finally behind a hangar after a few years.

Eventually, the hulk was purchased by one Captain Derick DeBris (ex-RAF in the Big Fuss –  now at DeBris Model Works) for a symbolic 2 pounds 5. He towed the once-again-discarded frame back to DeBris Field where he restored the unloved aircraft to flight-worthy status. It was registered as “G-ERUP” in reference to the early retractable undercarriage (gear up).

He used this as a local “airline” and transport for his remote neighbors. It wasn’t much of an airline as it could only take three passengers. One time, he won a small transport contract for the London Zoo. When he arrived at the zoo, he found that the job required flying a full-grown ostrich to Manchester. The only way they could manage this was to bind the poor bird seated on a nest and have its head poking out of the rear engineer’s cockpit!

After a series of misadventures – including cannon balls falling through the floor on a flight over the Thames, barely missing the Tower Bridge, and that time he rented the Discard to a pilot and a barrel of whiskey “broke loose and shifted to the rear” causing the “improperly balanced” plane to fly as if the pilot was drunk (whiskey was everywhere after that rough landing, including all over the pilot, but no barrel was ever found) that crushed the rear fin and was the last flight – DeBris sold the well-worn transport to some rather unsavory characters who took it west. They did a quick patch job, fixed the rudder, and repainted the poor machine. Not having a clue as to what the original fin looked like, they hacked together an ugly job. They tried to flip this crate as a “new product” calling it the “Bristol Bullhorn”.