“Props” to Some of my Flying Friends

Today seemed to be the day to get news on accomplishments of some of my flying friends.

The first one I will mention is good friend and fellow Cloudbuster, Ted Allebone.  Ted’s 2012 AMA Nats winning P-30 design was finally published in the AMA’ Model Aviation.  His “Centaur” is a traditionally built and covered P-30 based on the flying surfaces of the old Keil Kraft “Senator” (note Ted’s play on words, there).  I would post a photo of Ted flying at the AMA Nats, but I was his timer for most of his flights.

The second person’s accomplishment may be even greater.  Today via email, I received word of an event winner at the fall Wawayanda, NY FAC contest.  I’ve never been there as it is roughly 12 hours to the east of me.  However, I understand it is held at a fine site and attracts some of the best flyers from the east coast.

Apparently, it attracts some of the best flyers from the Toronto area, too!  The email traffic simply illustrated the winner in WWII Combat at the Wawayanda contest.  It showed a series of photos that included several competitors in the WWII event and then specifically identified the winner.  Below is one of the photos.  That is young Maria Kondrat, daughter of Gerard Kondrat.  She is in her early teens and is a regular at FAC events and, apparently, she has learned enough to beat some very good flyers! 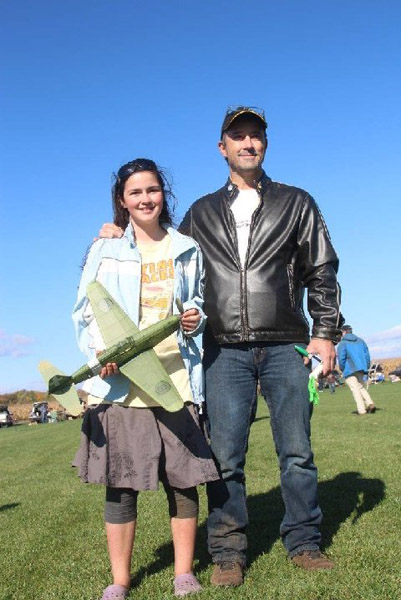 Maria Kondrat and her father, Gerard

Congratulations Maria!  and thank you to Ronny Gosselin for sharing the news and photos.

This entry was posted in Customers, Events. Bookmark the permalink.