Posted on 9 September 2019 by Bredehoft

I’m back from vacation and swamped with orders.  In addition, I now have two weeks to get all the trophies made for the Outdoor Champs and all of the Registrant Short Kits made.  One day, I will be elected as the President of the Procrastinators Club (but not today).

This last weekend was the RJK Follies meet in Muncie.  This is an annual Free Flight contest put on by Rudy Kluiber (Cleveland area) and is focused on “other” Free Flight – but Rudy has added two days of FAC flying to his three-day event.  He provided nice participant plaques and has promised to create a perpetual trophy for FAC High Point Winner.  THIS CONTEST SHOULD BE ON THE TO-DO LIST OF ANYONE CLOSE TO MUNCIE.

This was a wonderfully relaxed contest with only four events per day.  Unfortunately, it was lightly attended, with only four FAC participants (excepting two stragglers that put in FAC times from the other side of the contest).  They were Pat Murray, Winn Moore, Paul Boyanowski, and me.  We had overcast, but calm weather Saturday and Sunday, excepting Saturday afternoon, when it was clear, calm and buoyant.

Personally, I had low-lights and high-lights.  I struggled getting things to fly (and to keep motors in planes).  For example, I flew all day Saturday, but only logged six official flights (low-light) – BUT – four of those six were maxes (high-light) – but – one of those was a 8:18 deep into the beans and was lost (low-light).  However, I got my Jumbo Stallion properly powered and have a model that is practically guaranteed maxes ever time (high-light), but a faulty DT/Tail/Seating caused a stall and crash shortly after launch that will require the entire nosebllock and prop assembly to be rebuilt – in two week – in addition to trophies/kits/orders (low-light).

Lastly, I was shut out of the kanones.  However, let’s look at the facts: Winn had a spectacular day one, winning three out of four events (Embryo, Dime, OT Rubber).  In fact, he was High-Point Winner and picked up a fourth kanone on Sunday (Jet Cat).  Pat Murray won FAC Scale and Jimmie Allen.  And Paul Boyanowski won Simplified Scale.  Nearly all of the events were close;  OT Rubber had a fly-off between Winn (Wanderer) and Pat (Jabberwock).  Pat landed at 4:15 with Winn about 10 seconds behind that – and they were within 100 feet of each other at the end.  I had grand designs on Simplified Scale after my Jumbo experience on Saturday and did log a Max (after a 100 on the first flight), but crashed out on my third.  Winn put in 3 90+ second flights on his Stout 2A-T, Paul put up a Max, 110, and a 103 on his (anything but simple – see below) Cessna 180, and that encouraged Pat to get out his high-flying WWII-Combat Grumman Avenger – practically a guaranteed winner.  He maxed and then went down hill in the overcast afternoon, giving Paul the win.  It seemed every event was close like that – a great contest.

One last thought about the competition.  We had four competitors – with 694 Kanones between us (as of the beginning of August – kanone reports is another thing I am behind on).  That’s some pretty serious flying there – all of us know how to build and fly and win – and there can only be one winner in each event.

I had a comment from someone that they did not see me post any photos after day one.  She (my wife) was right.  So I took some pics Sunday.  Let’s call this “A Study in Perfection” – these are two planes by the Master – Paul Boyanowski.  Usually I will do a single photo, but I am doubling up on these to show the exquisite detail that Paul puts into every model.  The first is his winning Cessna 180 (modeled after Mark Houck’s full scale 180) and the second is his venerable Albatros D.i. 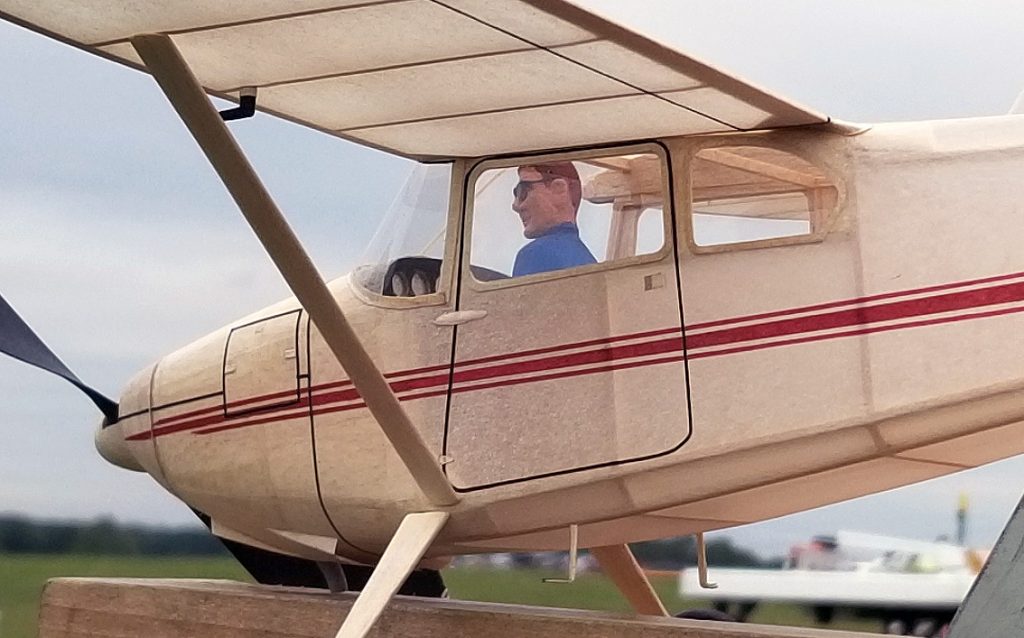 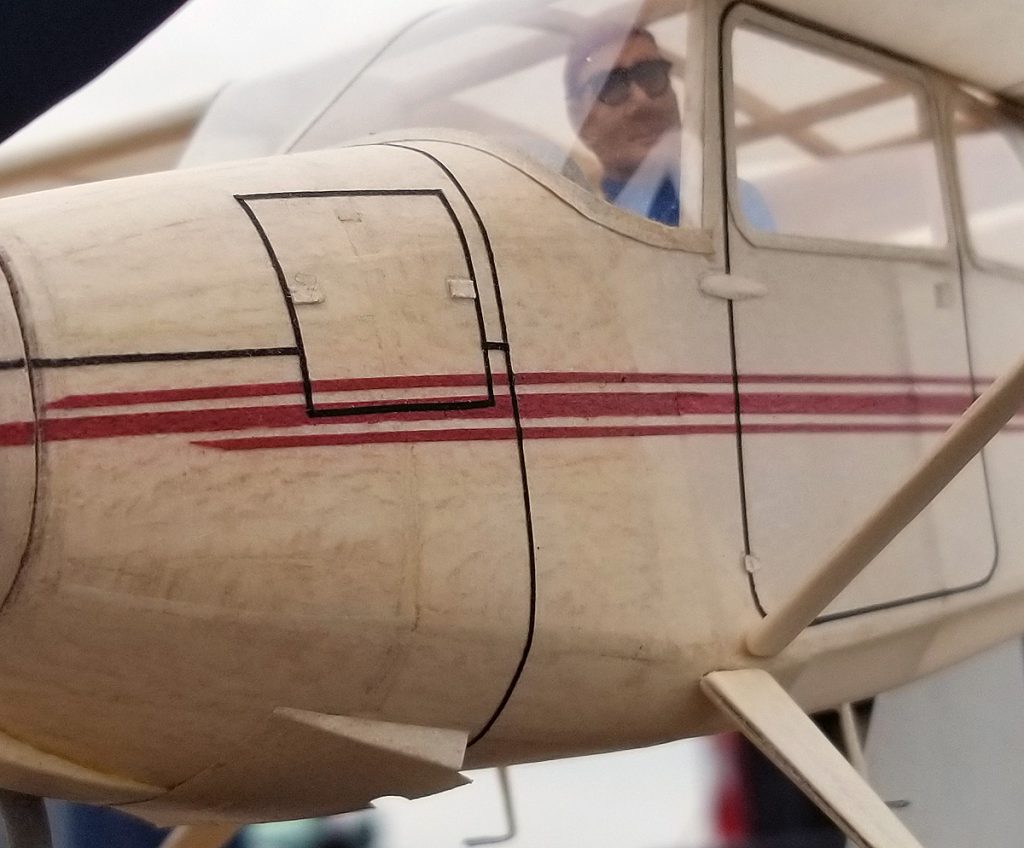 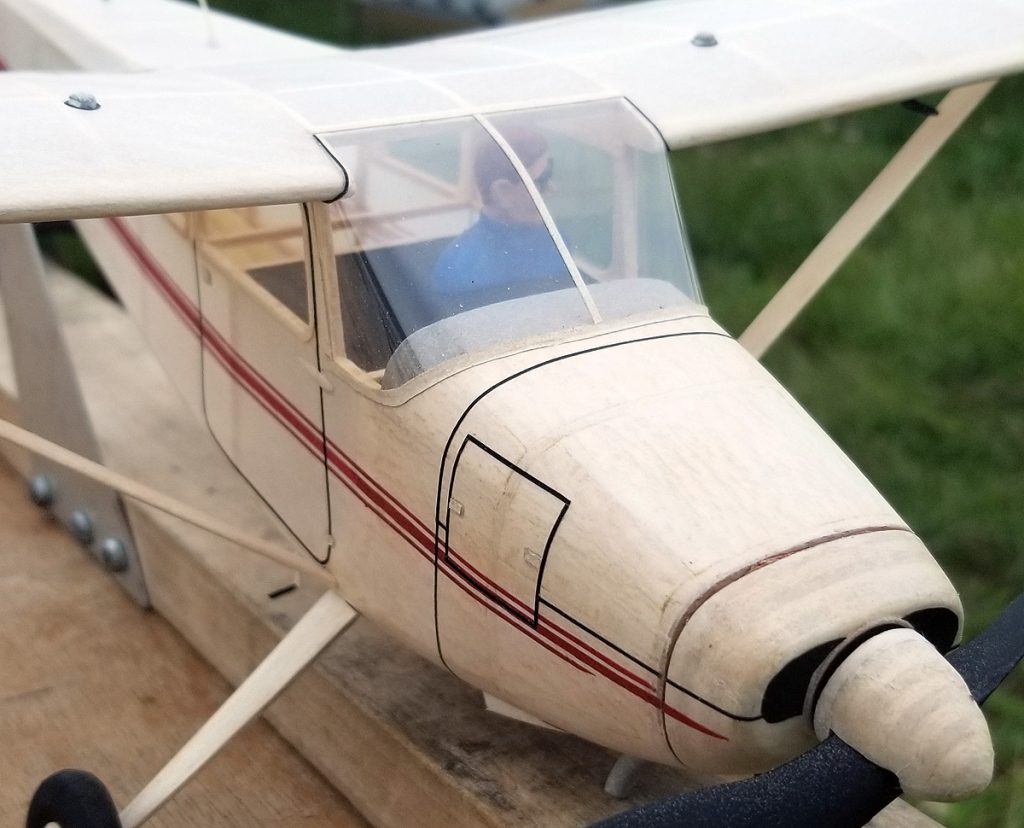 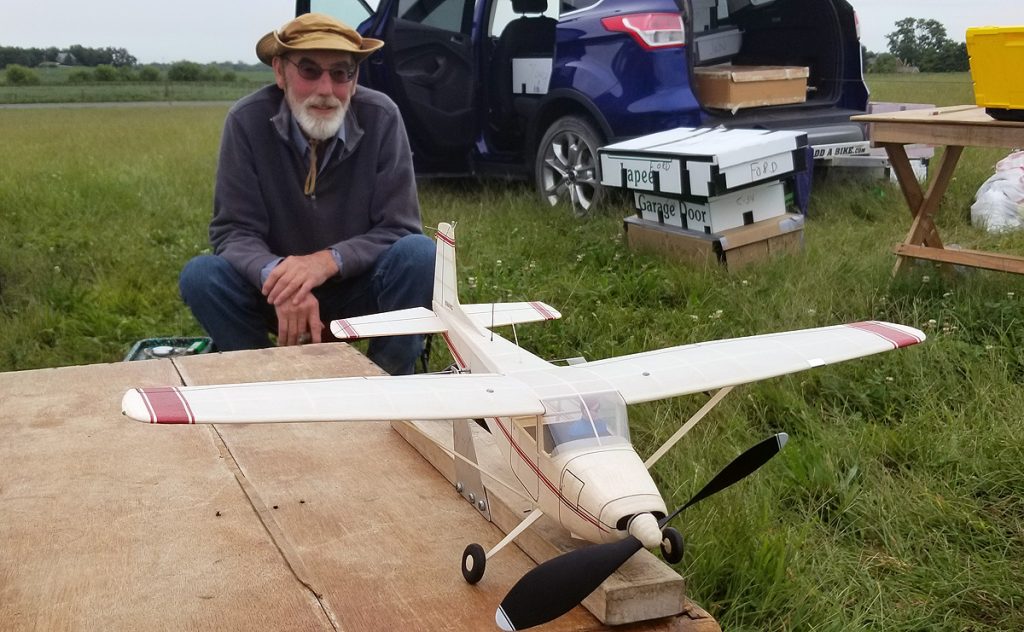 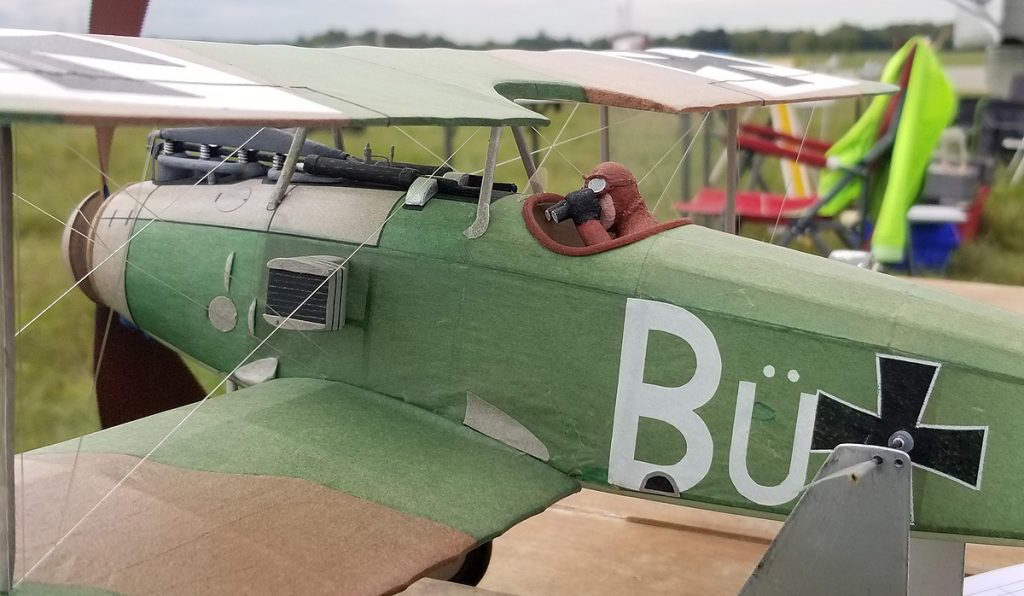 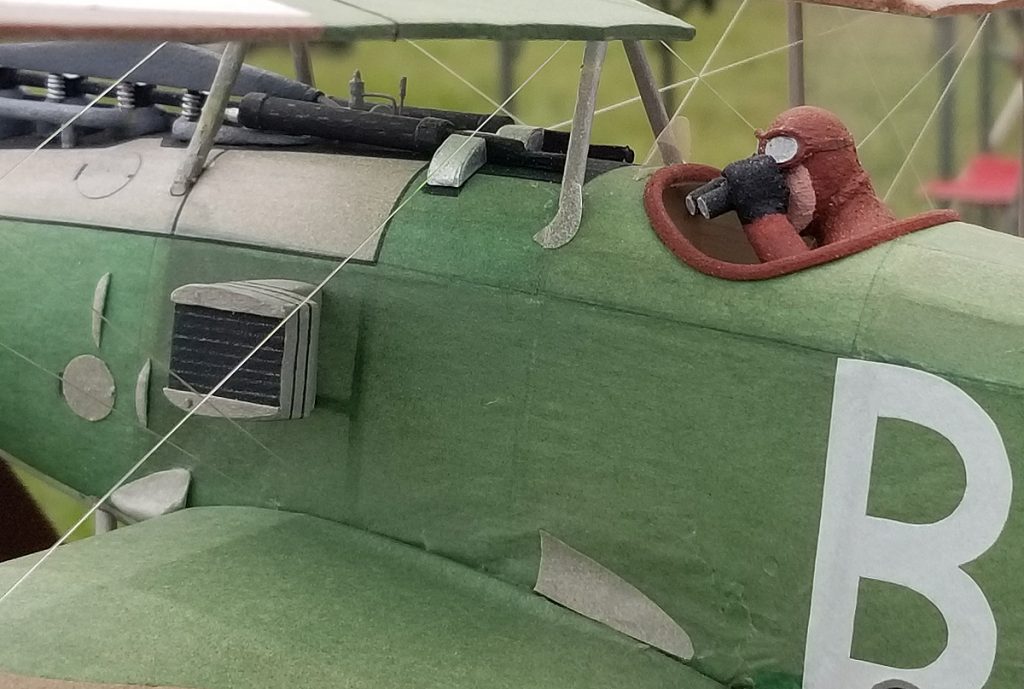 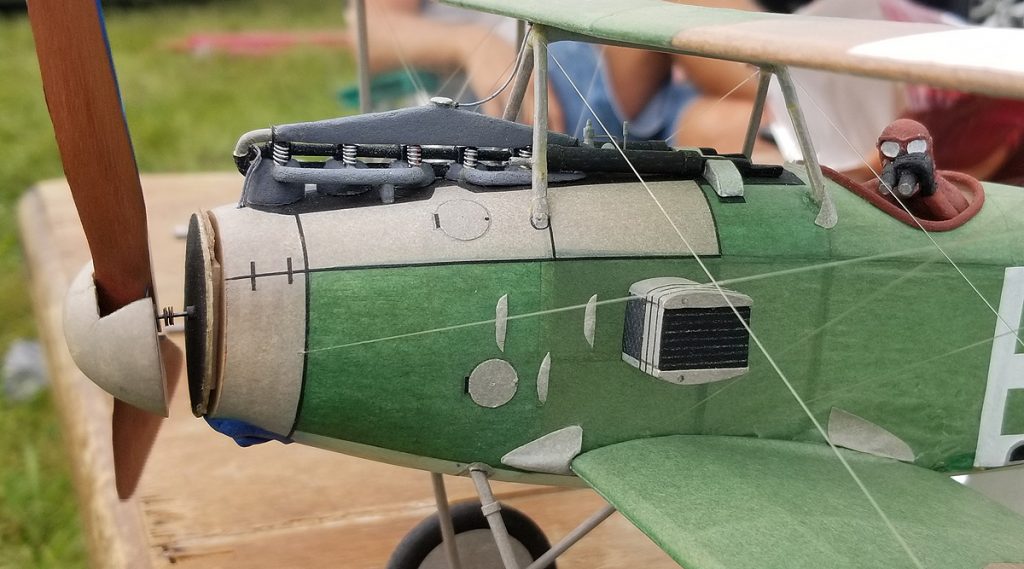 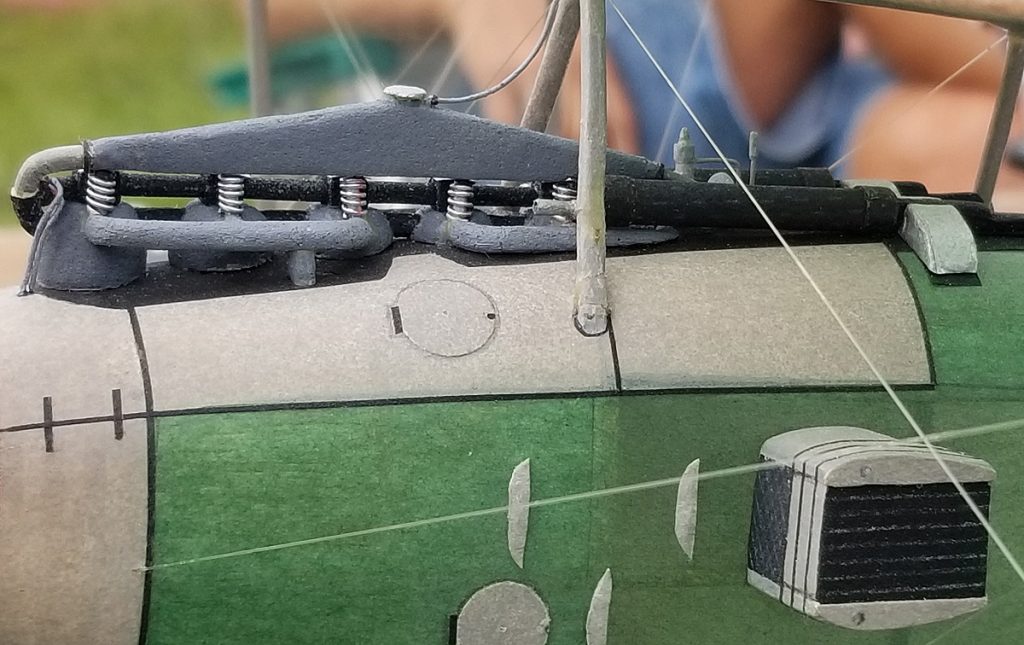 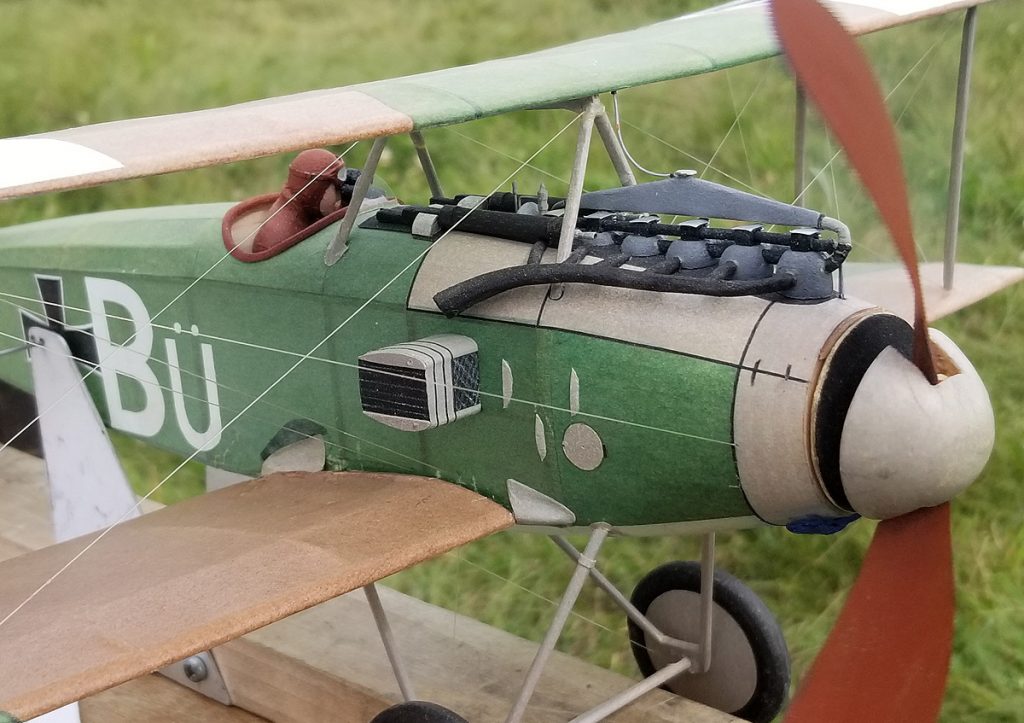 The prop is not bent, That is an artifact of a digital photo – the wind was turning the prop. 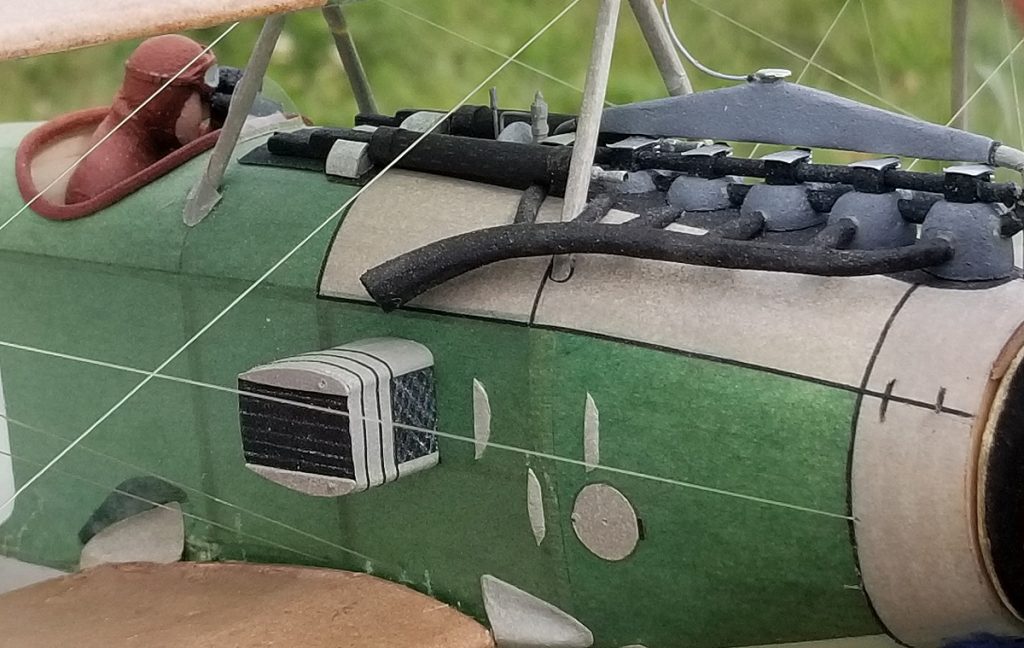