I got back last night from five flying days in Muncie:  three at the AMA Nats and two at the McCook Squadron FAC Contest.  For those FACers that were at the Nats, but left, Saturday and Sunday had near-perfect weather conditions – clear skies and very light breezes.

For the last couple of years, I have been prioritizing Endurance events (Embryo, 2 Bit, 1/2 Wakefield, Jimmie Allen, OT Stick, and OT Cabin).  They have been good to me and I’ve learned a lot.  In fact, someday, I will write an article about how flying Endurance makes you a better Scale flyer.  Also, I’ve rushed through many things, especially preparation.  It’s not good to arrive at a contest, especially a high-level contest, with new and untested planes.

This summer, Hung has given me a dose of humility, but backed it up with some redemption.  I have not had a good season to date in Endurance.  My week in Muncie was disappointing when it came to my Endurance planes, only taking a First in the McCook 1/2 Wakefield event (I also placed first in Jimmie Allen at Geneseo in July).  Other than that, there have been several also-rans, and a few broken models – it’s been painfully frustrating.

But Hung reminded me that I can still fly Scale planes.  Of course, nearly all of my flying “career” has been focused on Scale – I didn’t even do the Endurance events until say five years ago.

Work on my Caudron has been very rewarding.  FAC Scale was Friday, and I took my repaired Caudron out and started trimming, I was getting good flights, large sweeping turns to the left and a nice gentle glide.  I finally called for a time and wound it to max torque.  The large model pulled away hard, with a great climb in large left circles, with no hint of dropping that inner wing that is the risk with flying low-wingers to the left under high torque.  It just kept circling and climbing and hooked a thermal and went way up.  You couldn’t even tell when the power came off as the transition was just that smooth.  At a couple hundred feet, the band-burner DT went off (set to 2:20) and the model popped out of the thermal.  However, the split h-stab DT was uneven and it induced a very hard right spiral.  I knew it was going to be bad, and it was – both wing saddle sides were blown out again.  But I had a Max in Scale and that was the best that I could do.  It turned out that was enough as I took home the Champion plaque. 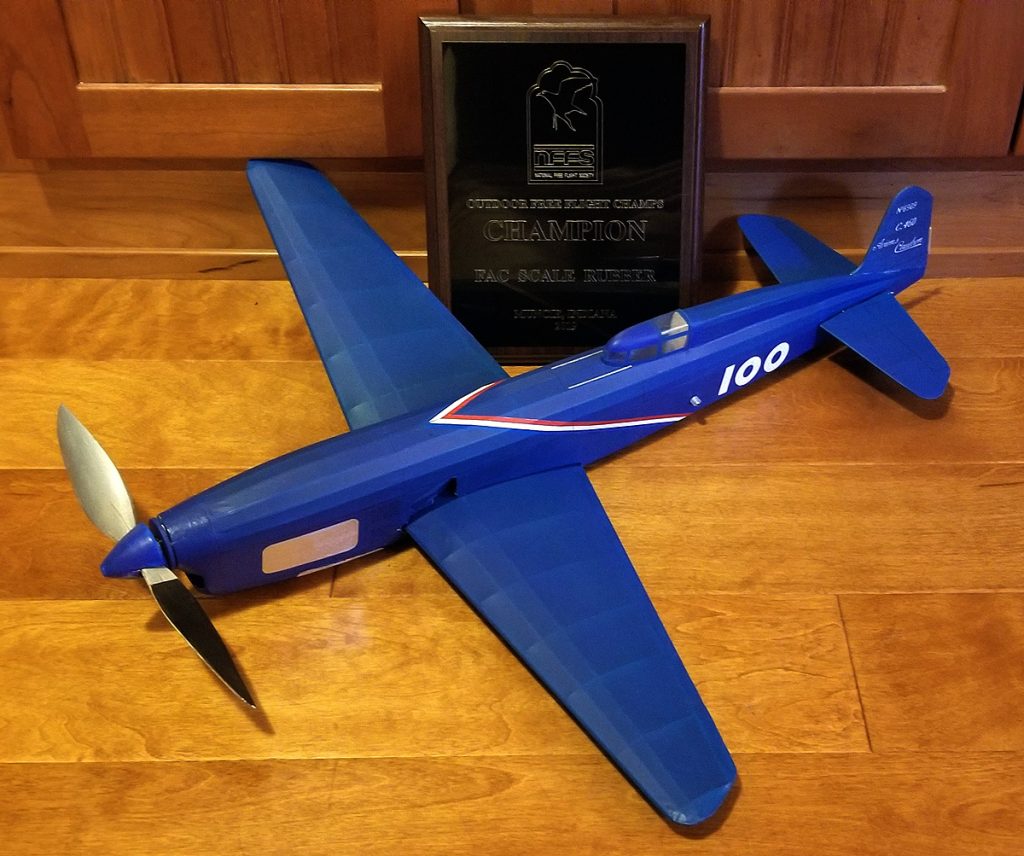 my 24″ Caudron C.460 – AMA Nationals Champion in FAC Rubber Scale. You can see the blown out side just above the wing – and that is the GOOD side!

On Saturday, the McCook contest also offered Scale, but the Cuadron was out (and it was out for the Greve Race – killing Mr Smoothies will have to wait).  So I decided to fly my Jumbo Stallion in Scale (there was no Jumbo event).  After several test flights, broken motors and waiting, I finally put up a near-max (118 seconds) and that remained good enough for the Win.

Lastly, late on Sunday, Peanut needed a third entry to award a kanone.  Pat Murray had put up a 110 second flight (something close to 110) very early in the day.  Thermals had seemed to go away by mid-afternoon.  I told him I would enter to fill out the roster.  I almost flew my Bellanca Aries T-250, but I broke a motor.  (Anyone that pits near me knows this is a regular occurrence – and since I fail to adequately prepare, it is also a time-consuming one.)  I decided to switch to my Fairey Barracuda which suffered from not one, but two idiot launches in the WWII Combat events this week (javelin throws resulting in stalls, and exiting the event as first-out).  I (and Pat) knew it “can” fly, but I was struggling this week.

I put up a qualifying flight, but had the urge for just one more (I still had 20 minutes or so in the contest).  THAT rubber broke and I hastily made a new one.   The next flight was stally and less than 20 seconds.  My long motor made the little model tail heavy.  I pinched off some clay for the nose and rewound the motor to max torque.  I added some right turn and called for a time.  The consciously flat launch went spiraling up to the right and just kept going.  I launched into a thermal (I wasn’t event trying for that!) and I took off chasing.  I had broken off the Garami clutch earlier and just bent the shaft over the prop.  That bent shaft locked the prop and saved it from the thermal.  I got back with the model  and was told it was a max!  I knew my scale score was better than Pat’s so that sealed the deal – another win with a Scale plane! 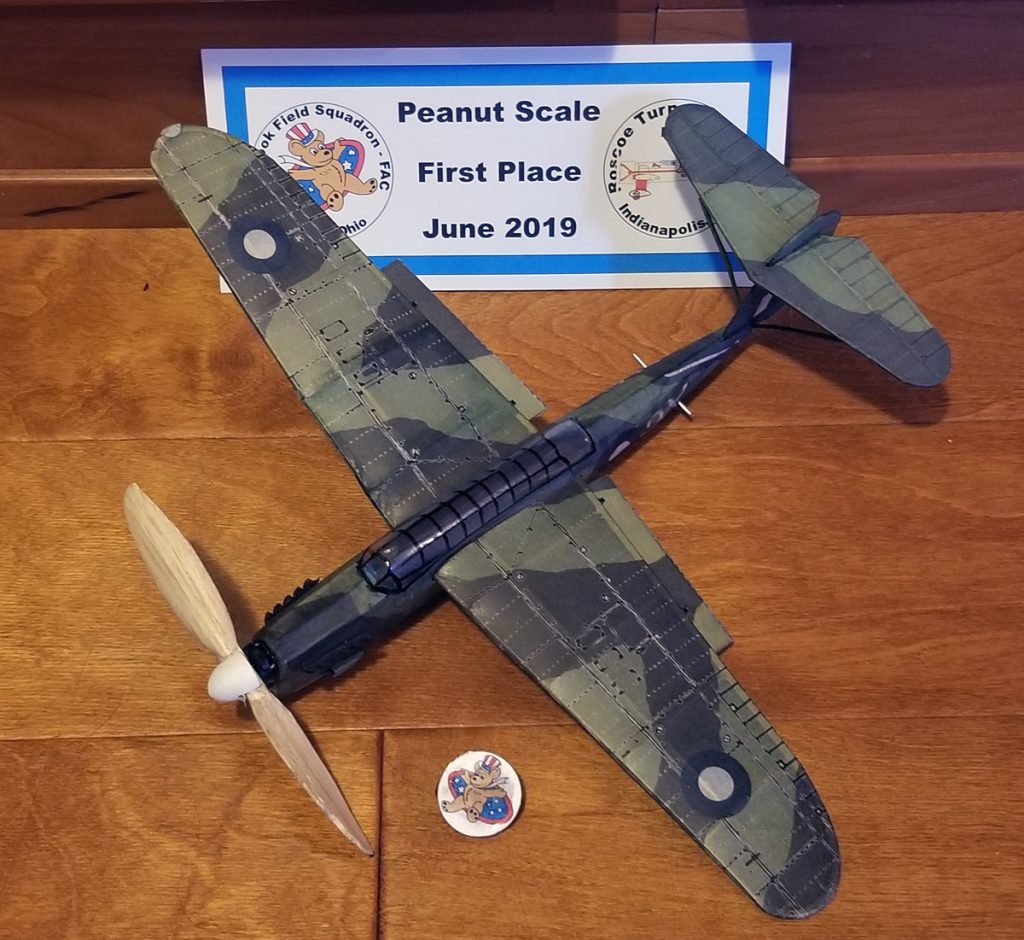 It has been a long time since I had such success in Outdoor Scale events – and it feels good.  And it takes the sting away from the poor performances in Endurance. 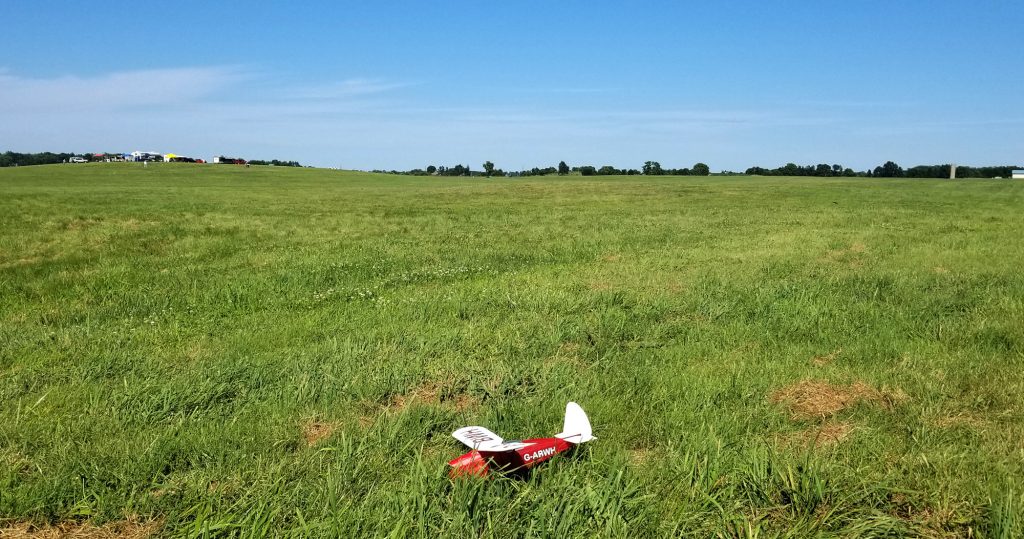 My 24″ Comper Swift. It was 9 seconds short of winning Golden Age Combined at the McCook contest.