They Call It “Endurance” For A Reason

Well, two weeks of National Contests are over for the year (first the FAC nats in Geneseo, NY and then the AMA Nats in Muncie, IN).  I had goals – most of which remain unfulfilled, but it was a good time and many lessons learned come from it – along with new goals and projects.

The Wanderer, while I would like a better climb-out is reliable, as long as I keep the dumb pilot from making mistakes.  It often makes a fly-off (after 3 maxes), but is oftne short on the duration needed to win the fly-off.  This year in Geneseo, after one long flight, I retrieved it from the beans and got back to “camp” and noticed about 3/4″ was missing from one tip of the propeller.  Not having a replacement prop handy, I just balanced it and  flew at least 4 or 5 more flights on it without noticing any difference.  My Wanderer came in 4th in fly-offs in Geneseo and Muncie this year.  I will make a new prop, but keep the old one on hand – just in case. 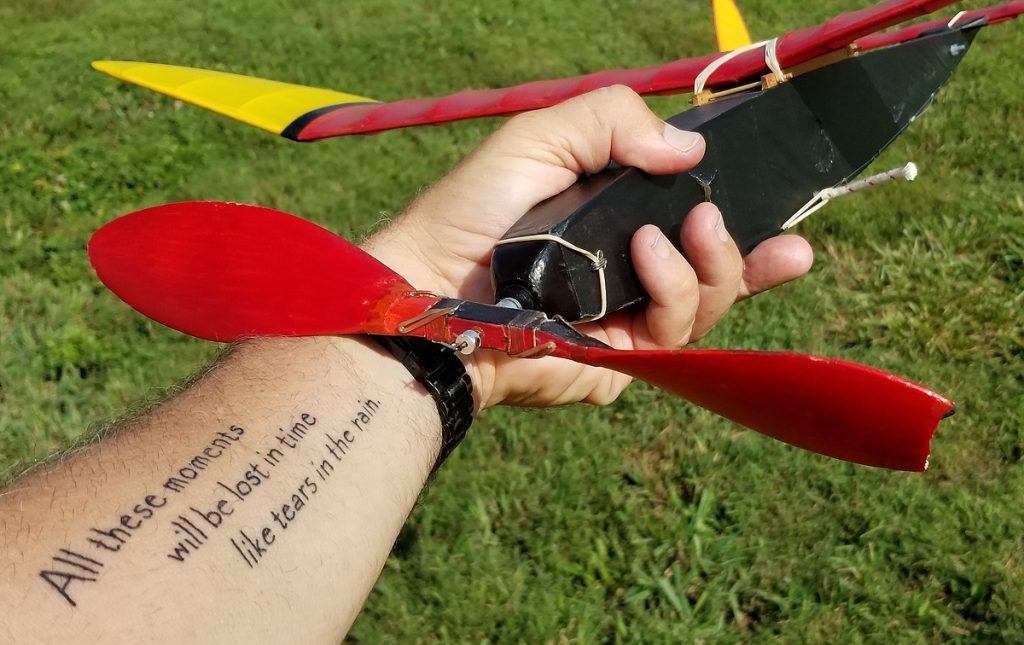 Prop Damage – and my new tattoo. Remember to live every day.

My Bad Axe – two-time AMA Nats Embryo Champ has taken a beating – the 1/16″ fuselage does not handle blown motors well.  In June, ALL of the tissue was blown off the fuselage and I could not complete my 3 flights at that particular contest. I hurriedly recovered the rear part of the fuse (behind the wing), but the front half remained shaky.  It was so windy in Geneseo, I could not get my flights in and chose to concentrate on 2-Bit.  I took it to Muncie and proceeded to break the entire top of the nose off the model test flying before the contest even started (Tuesday evening).  The plane has been suffering for awhile and I should have just stopped right there, but I had to defend my trophy!  I rebuilt the nose the night before Embryo in Pat Murray’s motor home.  I used 1/8″ square throughout because I couldn’t finish the tissue to give it strength.  It would have to do.

The next day, I upped the motor from a loop of 3/16″ to 2 loops of 1/8″ (the plane is getting pretty heavy).  I gave it a test flight and had mediocre results.  I called for a time and put up an 89 second flight – a sad ending to a faithful model.  In a moment of inspiration – or desperation – I swapped out the 6.5″ wooden Superior Prop for a Czech 7.875″ plastic prop and wound it up.  Gene Smith was timing me and I expected more mediocre results.  After about ten seconds of flight, he shouted to me “I’ll mark your max down right now!” as I rode off chasing a monstrous rocketing flight.  Indeed it was a max!  My third flight was a repeat of the second.  That prop and rubber combo breathed new life into a model that was nearly retired.  If I had just swapped that prop one flight earlier, I would have taken home Champion again, instead of Second Place.  I will keep using the Bad Axe, but will soon build a new Embryo.

The King Harry was looking like it would be FAC Nats champ when I put in a terrific 3+ minute flight on a windy day deep into the beans – and I walked right up to it (roughly 10-15 feet off my 1/2-mile line).  I had some issues getting off the table in the strong winds and as I took off on my bike for the launch table, the O-Ring I used on the prop end of the motor BROKE, sending the fully-wound motor back through the fuselage, taking out uprights and tissue.  The prop was also broken in half earlier (probably best I did not get that last flight).  More dashed dreams at Geneseo.

At least 8 cross pieced to be replaced and almost all of the tissue.

I got home from New York on Sunday afternoon.  I was leaving for Indiana on Tuesday.  That left Monday to rebuild and re-cover the fuselage and repair the prop.  It was a fairly simple job, but time-consuming.  The prop was reinforced with carbon fiber strips and bound with thread.  But the plane was back to “normal”.

It flew well in testing – and it flew well during official flights.  I maxed out, although the last flight was in “bad air” and only got a 2:00.xx flight – JUST ENOUGH!  I waited the rest of the day – there were serious flyers out there flying, including Don DeLoach with his amazing Flying Aces Moth – and he had maxed his first flight.  I waited until the cut-off time for OT Fuselage times (3pm to allow for a potential fly-off).  No one triple maxed – I was CHAMPION! 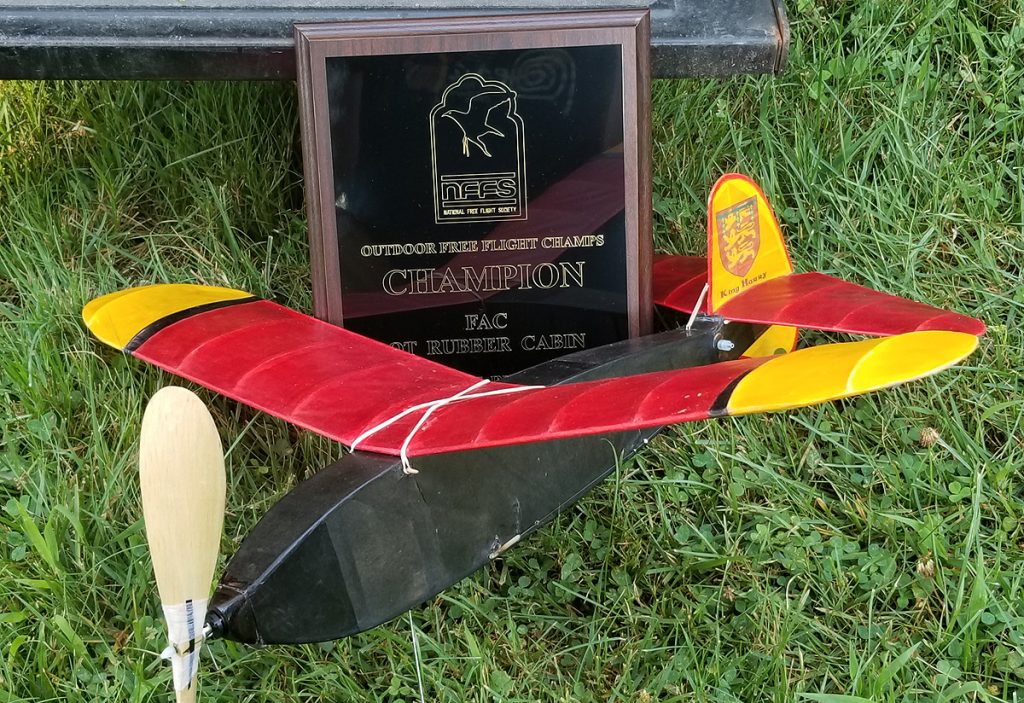 You can see the prop repair.

1 Response to They Call It “Endurance” For A Reason