Surprised by Out-of-the-Box Thinking in Embryo – with plan download!

For many years, I have had an Embryo “design” floating around in my head.  Basically, I wanted to create a pod-and-boom-type of model.  I remember years ago drawing up (as in pencil and paper!) something I called “the Green Monster”, somehow associated with baseball and Fenway Park.  These designs are, by nature, pretty ugly aircraft, and I had no thoughts they would be at all competitive.

When I came back to the hobby, I got the opportunity to fly indoors at a great site, the Ultimate Arenas in Pontiac, Michigan.  Imagine a full-size soccer field covered by a 40-70 foot ceiling.  At first, I would go once a year, but then a few years ago, things changed – the Cloudbusters made that their monthly indoor site and I retired.  I was able to go once a month (I could go once a week, but 2 hours each way for 2 hours of flying makes me say “no thanks”.)

There is a bit of a rivalry here in the Cleveland/Detroit area.  Maybe it is one-sided, maybe it is not.  Us Detroit “outdoor” FAC flyers that fly indoors in the winter are dominated by the Cleveland Indoor flyers when they come up to Pontiac for the yearly Indoor Fling.  Don and Chuck Slusarczyk, and Larry Loucka thoroughly beat us in FAC events such as Phantom Flash, NoCal, Peanut, and Embryo.  Winn More and I have made it a personal goal to raise our level of performance to somewhat match theirs.  The most obvious place this happens is in the categories of Phantom Flash and Embryo, where FAC Rules specify 2 minute maxes as official flights.  If more than one person get triple-maxes, this forces a fly-off, generally we choose the mass launch, all-up/last-down tie-breaker fly-off.  But in order to get there, we need to build models that are capable of triple maxes.

In preparation for the 2017 Indoor Fling, I decided to build an Embryo.  I used a mash-up of ideas that I had gathered during my bar-raising experiences.  I had jumped into flying the local event – Blatter 40 – a simple stick ROG with 40 square inches of wing area (I was the Cloudbusters 2017 Champion, averaging about 2:30 a flight) and had successfully built a NoCal that took my Indoor NoCal times from 2:30 on up and over 5 minutes.  Using these, I decided to revisit my goofy pod-and-boom Embryo design – but just for fun. 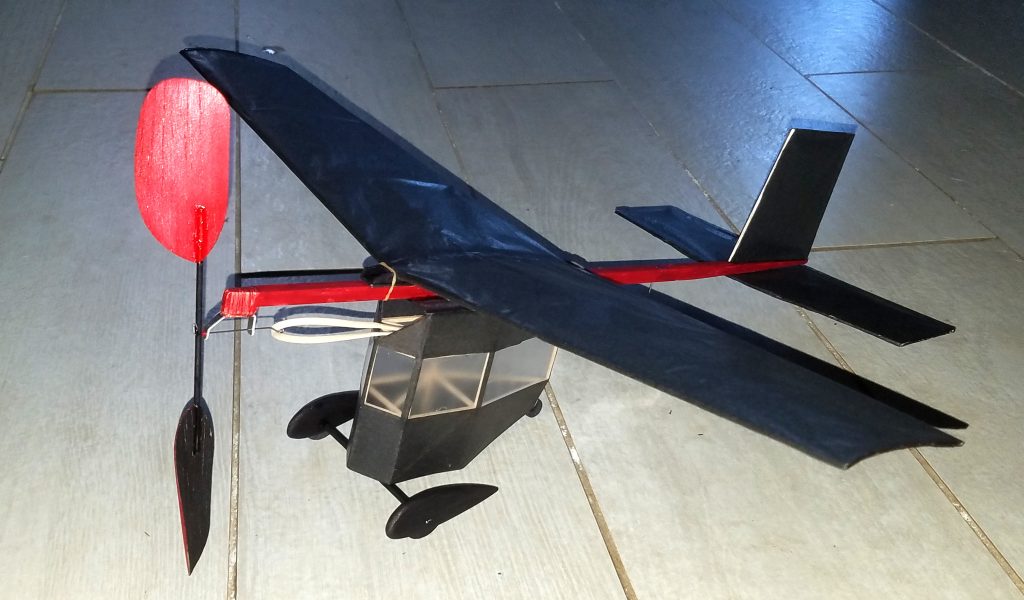 the Sky-Box completed in 2017 before any successful flying

I used the Blatter 40 wing (with its 6% Simplex airfoil) and increased the chord to achieve the Embryo maximum wing area of 50 square inches.  I also used the Blatter 40’s simple tail surfaces.  For the power, I used a 1/4″ square stick of light balsa, an aluminum prop hanger, and a 7″ diameter can-formed prop – all from my NoCal experiences.  The fuselage of the model was the 1.25″x1.5″x3″ Embryo volume, stood on end, with triangles tapering the “leading edge” and “trailing edge” of the box.  The un-enclosed motor passes through the top of the fuselage.  A simple speader bar was used for the wheel supports and some of my GeeBee Model Z-inspired Embryo wheelpants were employed. 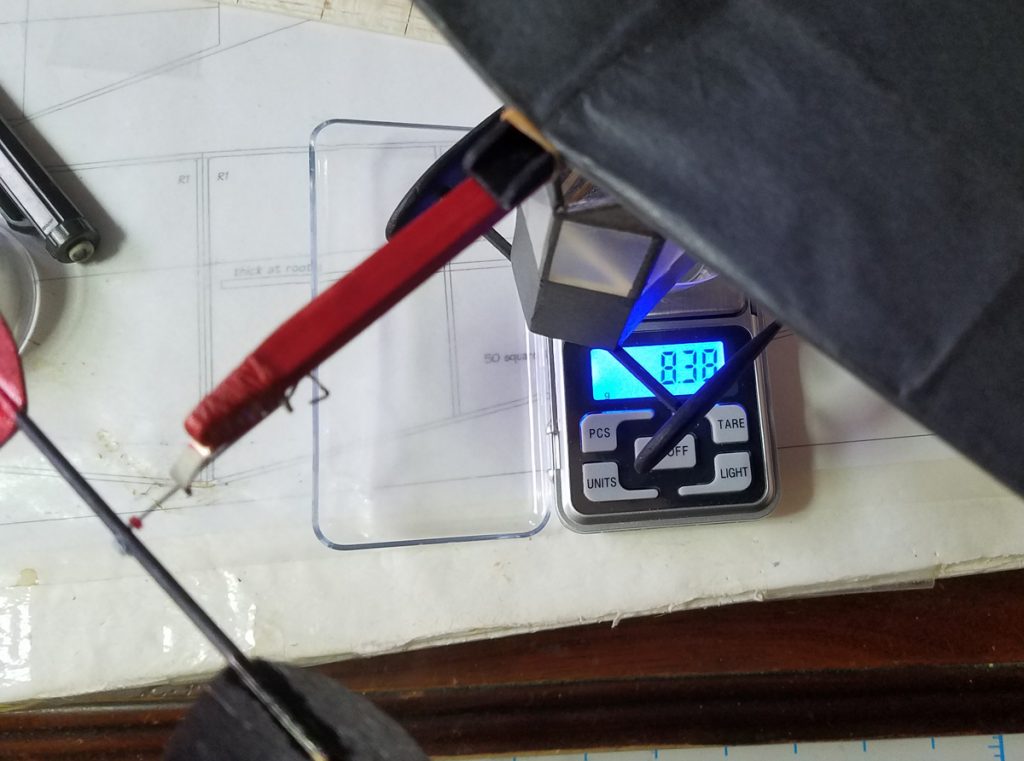 I had it ready for the Indoor Fling in 2017.  My plan was to power it with a loop of 3/32″ rubber.  During the event, I could get no more than about 1/2″ circle of flight – and that was from a hand launch.  The silly model was a failure (not a surprise). 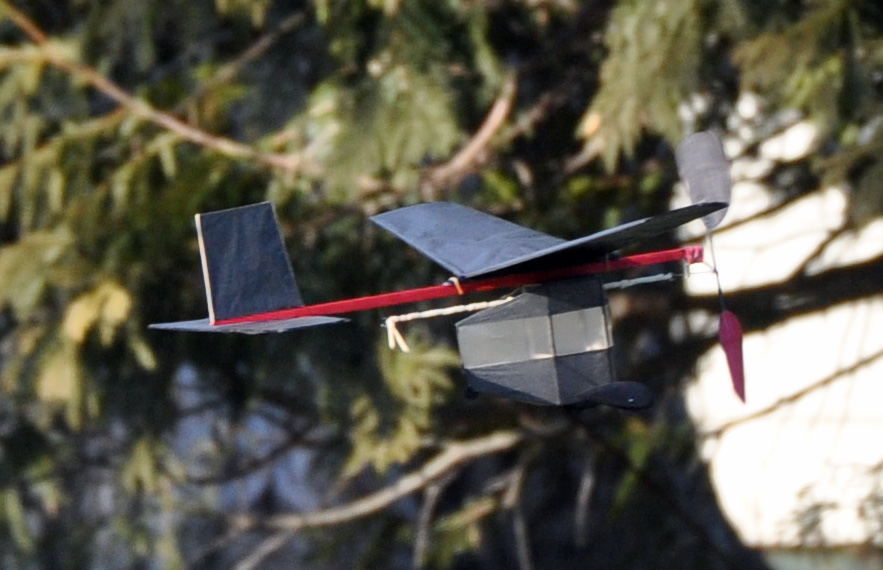 The 2018 Indoor Fling came and went and the Sky-Box stayed at home; not yet relegated to the “failed-plane” pile, but never being brought to any flying event.  As I prepared for the 2018 AMA Indoor Nats, on a whim, I packed it to take with me.  The contest schedule promised a lot of down-time, as FAC events were flown in the morning and us FACers would have all afternoon and evening to test, chit-chat, and watch the endurance flyers.  So the weird little model came with me. 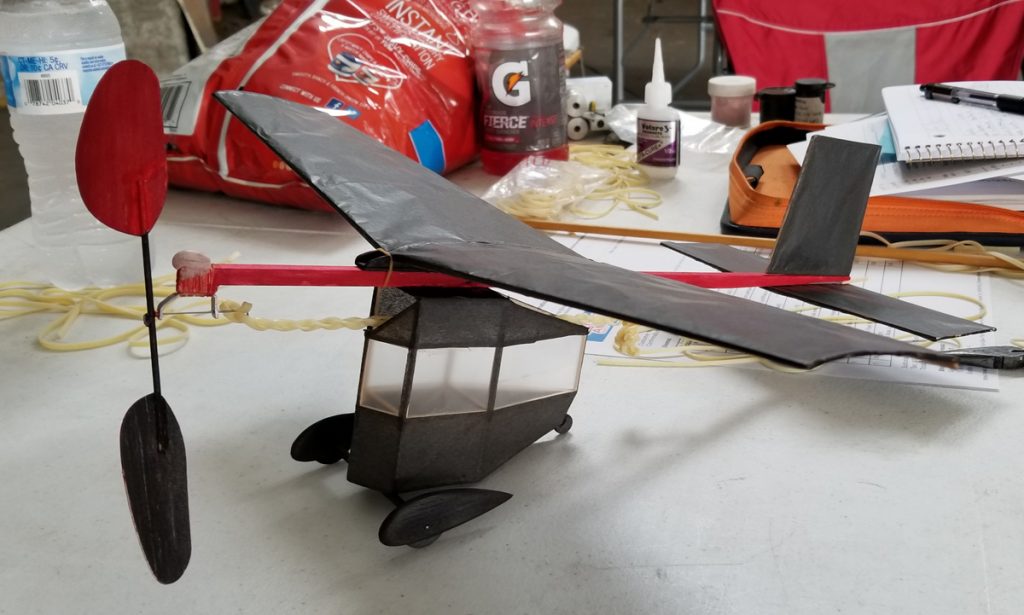 ready for testing at Rantoul in May 2018

One of the first things that I did was up the power.  I installed a loop of 0.110″ rubber (“scrap” from making 0.085″ motors for my NoCal).  I found several things with this motor: a) it flew very well from hand-launch with this power, b) it “might” ROG, if torqued way up, and c) ROGs were not easy, as the torque wanted to lay the model on its left side.  But I was able to log a 1:29 test flight from ROG!  I never expected the model to hit 1 minute, let alone 1.5 minutes!  If I could manage the ROG, I could put in some respectable times in Embryo!

The next afternoon, I decided to up the power again – I went to a loop of 1/8″ (0.125″).  I had to dial in some more right thrust and I even put in a smidge of up.  This helped the model ROG, but it still is an iffy proposition – I have to let the prop spin up before releasing the model.  By the time the evening was done, I had logged a 1:56 flight followed by a 2:05!  I had broken 2 minutes!  This meant that I could force a fly-off in Embryo, if I could string together 3 maxes.  Forcing a fly-off is my only hope against Don and Larry – their Embryos fly 3 and 4 minutes.  But maybe I could come in 3rd (my best hope and considered personally as a “win”).  I hurriedly cut some coffee-stirrer exhaust stacks and glued them on – full bonus points are important for competitive Embryos. 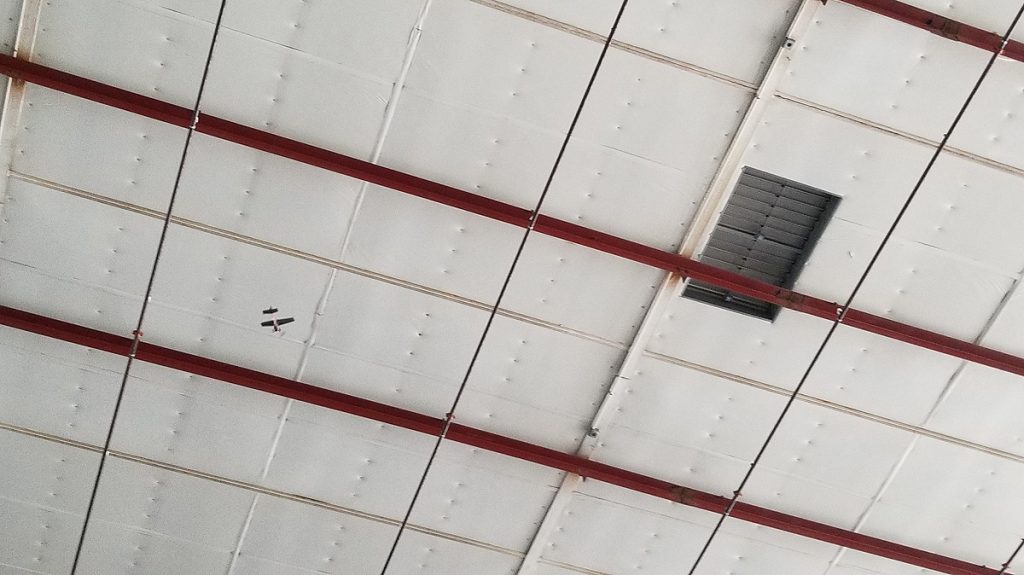 On the last morning, I eagerly went out and called for an official – just pulled the model out of the box and wound it up.  The model came off the ground, and climbed for the rafters.  In fact, it climbed too much, bumped, dived, recovered and continued on – for a 1:53.  I had dropped my first official.  My second two were 2:11 and 2:16. I had done the best I could, but there would be no fly-off for me.  It turned out that Larry had dropped a flight, too, and only logged a 1:49.  Don maxed out, and George Nunez also dropped his first flight at 1:12.  That put me in SECOND!  All with a model I built for fun without any real thought of being competitive.  In fact, I had really given up on the model.  Now, the Sky-Box will see more contests at Pontiac, for sure!

I will send the finished plan off to a newsletter or two and I will offer it right here as a free download.  If any of you build it, please send in photos and let me know how it flies.