I got to Rantoul, the site of the 2018 AMA Indoor National Contest Thursday around noon, just as expected.  Well, I forgot about the time change, so it was just about 11am.  It was an easy drive with the exception of the congestion just before I got off I-94 – remember this is the southern edge of the Chicagoland experience.  The remaining 90 miles was easy. 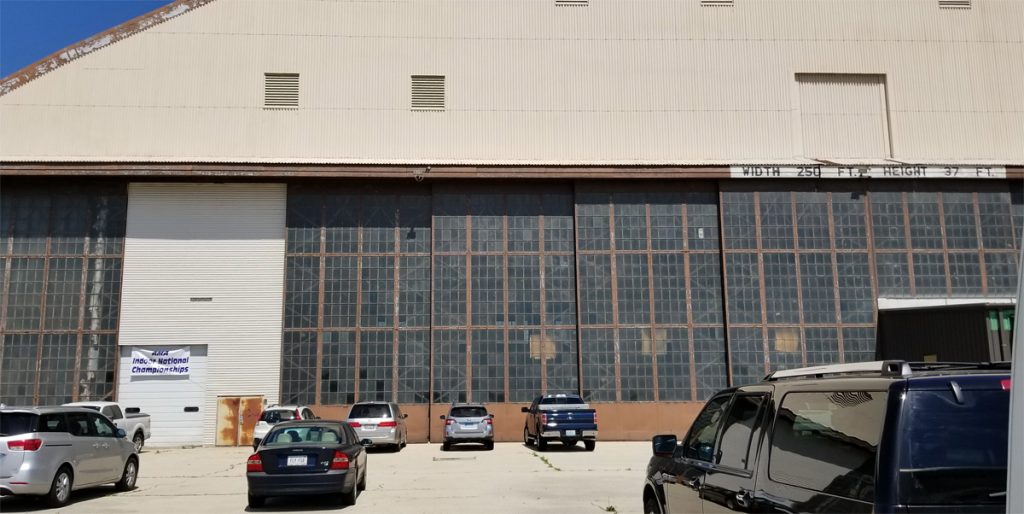 The contest was held in a hangar on the closed Chanute Air Force Base.

I was somewhat filled with excitement as I have never attended an Indoor Nats. I went to do my “duty” to represent the Flying Aces Club. The Nats always have FAC events, and even at the Outdoor Nats, they are under-represented; on occasion, even the First Place plaque cannot be awarded – since no one flew the event at all. I tried to drum up interest on Facebook, posting about the contest regularly. I was hoping it would be effective.

As an outdoor flyer, one who specializes in Scale and Sport Rubber Free Flight, I have some common ground with Indoor flyers, but they are a breed apart. While FAC flying can be laid back, but fast-paced (if you fly a lot of events) indoor flyers appear to work differently: slow, but intense. And the difference between our modeling specialties is so great that the day (or sometimes the venue) is split to accommodate one type but not the other. At this contest, the FAC events (and some heavier indoor events) were given 7am-12 noon, while the afternoon and evenings were dedicated to the light stuff. Fortunately the site was large enough and participation was low enough, that us heavy guys could go to the other end and test fly any part of the day, as long as we were respectful of the area of the light guys. 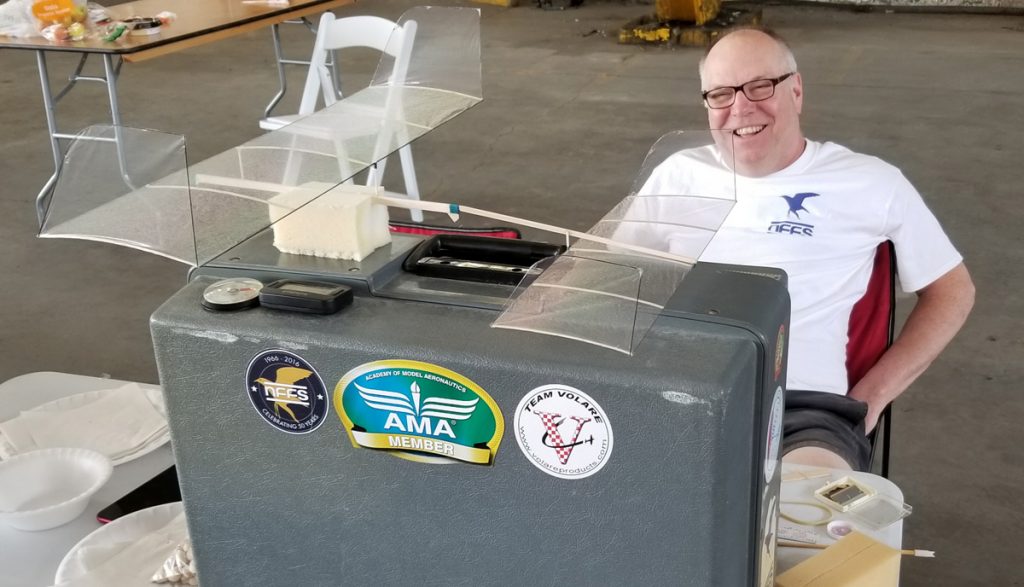 Upon arrival, I met up with John Koptonak (from Connecticut). Online, we had agreed to co-manage the FAC portion of the contest. It was a two-day drive for him. He planned on flying both sides of the contest, so I helped time him and such. I was disappointed that no other FAC people decided to show up, but it was early – FAC started the next day. Later in the afternoon, we met George Nunez. He said he did not know of the contest prior to seeing my announcement on Facebook. Well, my promotion had worked and he drove all the way from Miami, FL – a three-day journey for him. He brought about 20 models with him, just to fly for fun. Unfortunately, no other FACers showed up.

Flying FAC indoors takes some planning and risk, especially if you are an outdoor flyer trying to get your planes to fly indoors. I had planned on this contest for a few months, so I was able to use our Cloudbusters indoor meets as a tune-up. I had some planes that had been successful during our sessions and a couple of others that were still “in-process” of being trimmed and a couple that had never flown – indoors or out. 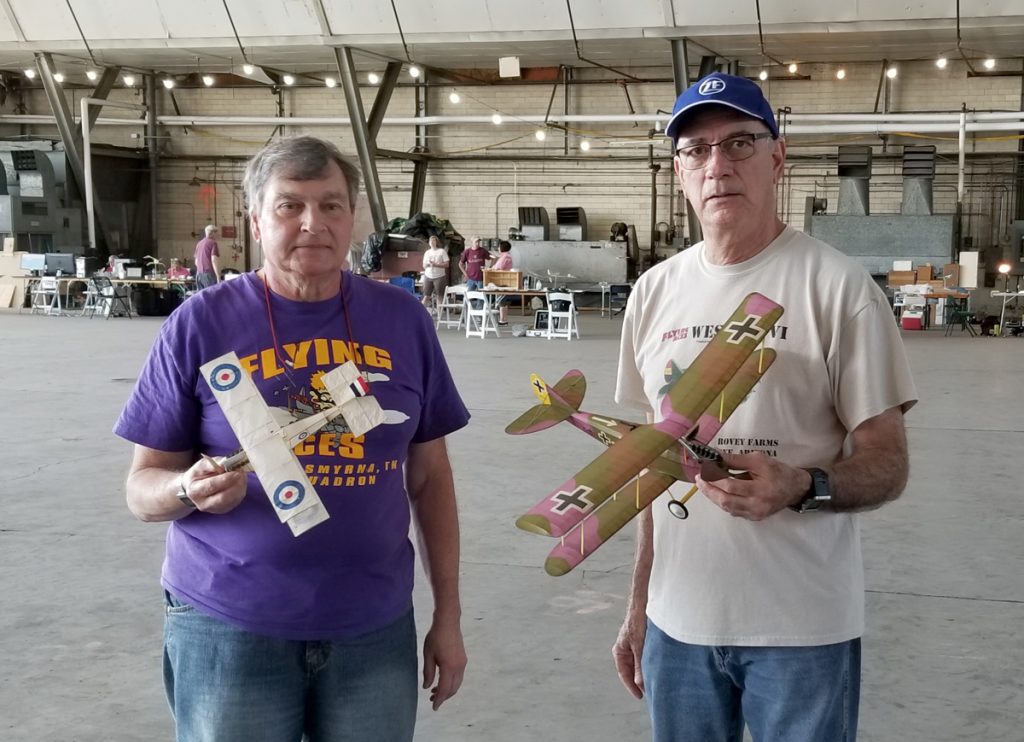 What happens when you hold a contest and only three people show up? Well, on the plus side, some events will have enough participation to award a kanone, but on the negative side, some will have little or no participation. In addition, when you offer FAC events to indoor guys, the can use their delicate building skills to dominate certain events. The indoor guys that regularly fly FAC events in my world are Don and Chuck Slusarczyk and Larry Loucka – all three from Cleveland. All three were at Rantoul. Given that, and based on previous contests with them, the best I could hope for in some classes was 3rd – maybe even 4th. That’s ok, though; trying to catch them has raised the bar in my building and flying. 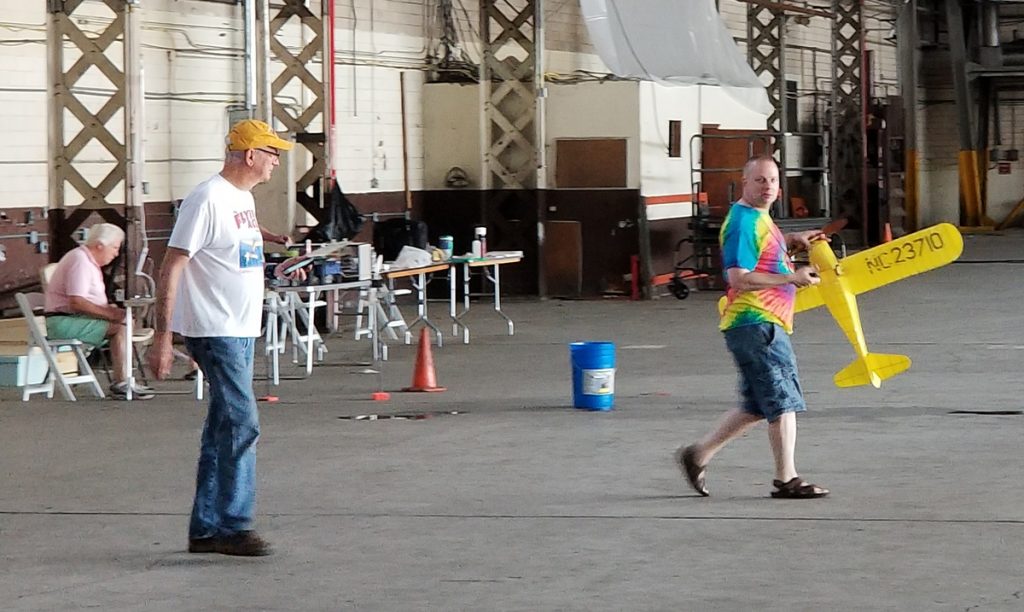 In general, the light attendance, especially in FAC events, allowed us to talk, discuss all manner of modeling, test fly many planes, and keep trimming and trimming. By day 3, my Peanut Barracuda went from erratic R-L crashing, to a very respectable, stable, and nearly ceiling-scraping 55 seconds. My brand-new Phantom Flash flew very well. Testing my Martin MO-1 on floats revealed the need for nose-weight. My Elmendorf Special just could not be forced to fly reliably on a loop of 1/8″ indoor when a loop of 3/16″ is required outdoor. And a goofy Embryo that I built on a whimsy a year ago proved to be a remarkably successful and competitive flyer. 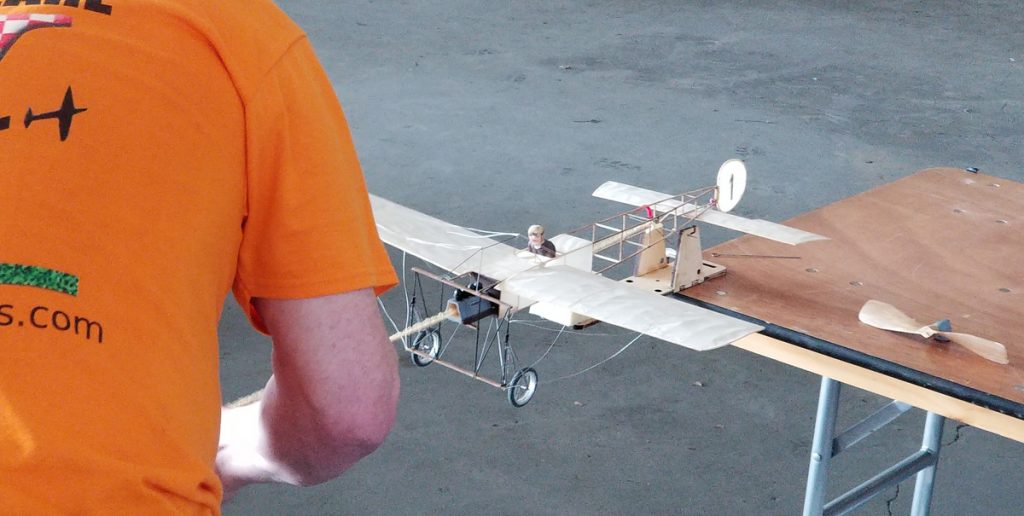 I also got to spend some time meeting people I had heard of online: Rey Mazzocco, Bill Gowen, Mike Kirda, and others. It’s always good to put names with faces. I talked with John Koptonak about specifics of indoor events. And I spent 15 minutes or so talking with Yuan Kang Lee about his F1D processes. I started by asking if F1D is the only event he flies or if there are others. His answer: “No, only F1D. There is not enough room in my brain for F1D, let alone other events.” A true world champion, he is constantly striving to understand and refine his models and is already working towards the next world championship with each flight he logs.

Oh, and one last thing:  we awarded a long-overdue Blue Max to Larry Coslick.  This had been planned for a few events at Muncie, but Larry’s health had prevented him from attending recently.

Here are the FAC Event Results: