At yesterday’s Cloudbusters’ Indoor Fling, we struggled (as we do every year) to fill the Goodyear/Formula One Mass Launch. By FAC Rule, these models must be modeling “aircraft entered in Goodyear/F-1/F-Vee/Biplane races” with a 13″ maximum wingspan (Peanut Scale). We didn’t have enough entries signed up, so, in traditional small club fashion, we scrambled to see what people had brought and if the models qualified. Here are two planes that were brought to the contest, that were questioned as to whether they qualified – but which could not qualify (and why).

(The conversations below are “representations” of the discussions and were with multiple people, not just me and one other. ”

The first was Wittman’s Bonzo. The model was held up to view and from across the room I could see the red fuselage and wings with the silver cowl of the pre-war, D-12 powered, Thompson Trophy racer (NOTE:  the real airplane was a Thompson/Unlimited Cubic-Inch racer – in the FAC, this model flies in the Greve Race for non-radial-engined race planes).  “Nope. Doesn’t qualify.”  “But there was a Bonzo Goodyear racer.”  “Yes and it was built by Steve Wittman, but it was a completely different aircraft. That model (pointing to the one held up) would qualify for GREVE (or Combined) Races, not the Goodyear.”

(Note:  all images here are found on the web.) 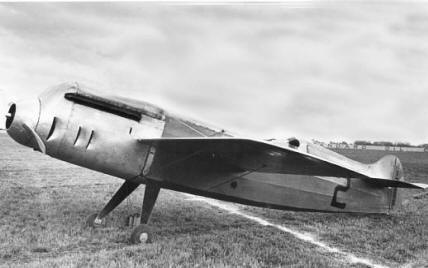 The second model in question was the Art Chester Jeep. “How about Chester’s Jeep (holding up a green and yellow, Menasco-powered racer)?” “Hmmmm – that is another pre-war racer.” “But I read it flew in the post-war Goodyear races.” (Quickly searching the web on my phone…)  “Yes, it says that, but it certainly would have had to have been re-engined with a horizontally-opposed engine and not using the Menasco.”  “Well, I read it was in the Goodyear…”  “I will research and get back to you – besides that’s not a Peanut, right?” “16” span, I think.”  “Goodyear Mass Launch is for Peanut Scale models. – P.S. keep that model – you can fly it in the Greve (or Combined) Races.” R.S. Hirsch indicates this was Red with Cream Yellow

note this airplane does NOT have the characteristic diamond-shaped wings of the early Jeep.

As far as I know, there was only one Goodyear Peanut model at the contest and we did not fly the event.

Race Planes can be a tricky subject.  The FAC Rules (and practice) allow for some leeway and “CD Discretion” but sometimes a little knowledge is a dangerous thing and a little basic research will  help prepare you for your upcoming events.  And don’t be afraid to ask your more-experienced modeling friends for guidance or advice along the way.