Posted on 6 September 2017 by Bredehoft

After my vacation, it has been time to regroup and figure out where I am in my business and where I want to go.  I really like kit production and will continue down that track.  In fact, I have recently come to an agreement with a well-known designer of winning models and we plan on doing several of his designs in the months and years to come.

As you might be aware, one of my “missions” for my business is to provide modelers with proven designs at a good value.  An important part of that concept is the “proven” aspect.  This started way back when I was only drawing and selling plans.  I promised the customer that each plan had been built and had been flown to at least the FAC minimum of 20 seconds.  Some models just squeaked by, and some flew OOS.  I have carried this practice on to my short kits – every kit I develop must be built and flown – from my kit.

This is where the bottlenecks start to appear:  it takes time to develop a kit, whether from my original plans or from someone else’s plans, but then, each prototype kit must be built and flown to be offered for sale.

Here is where I am today.  This photo shows three 2-Bit short kits that are ready to build. 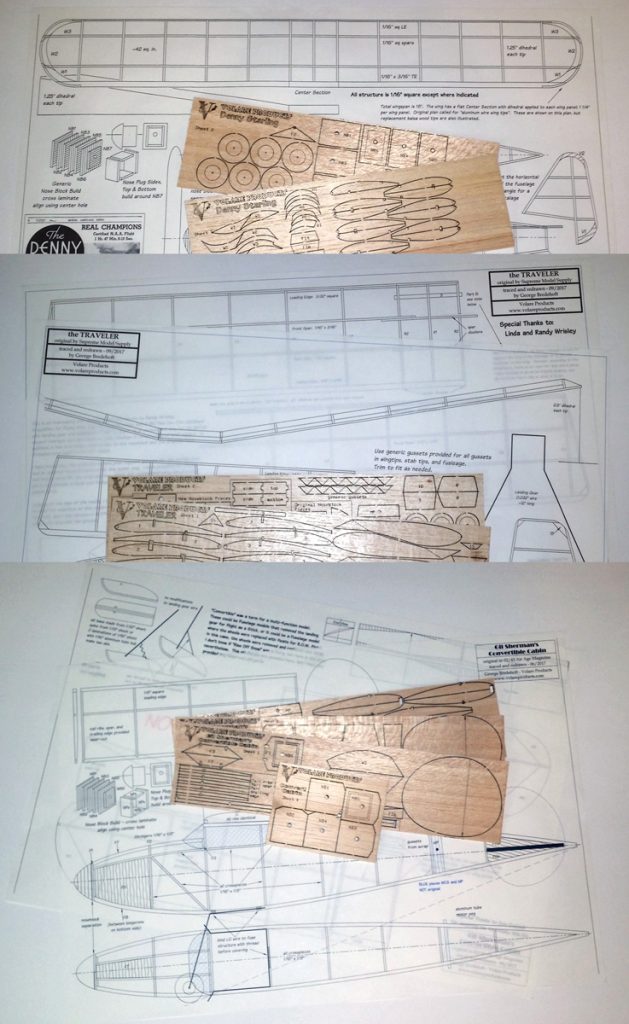 The top one has been sitting here for a couple years (actually, I did the plan in 2013), waiting for me to build it.  The middle plan was contracted (something I do not usually do, but this was a quick project).  And the bottom one was drawn up this summer and is ready to build.  In addition to that, I have another prototype kit in a modeler’s hands awaiting building and testing, and I have another awaiting my personal time to build.  Then I have two Peanut plans that I intend to complete in a couple of months.  I also want to draw up a 1/2 Wakefield and another Old Time Fuselage; both of which will be challenging for me.  And this doesn’t even touch on the previously-mentioned designer’s scale subjects.

All of this tells me one thing:  even though it takes MANY hours (roughly 100-200) to get a kit ready to build and sell, I appear to be able to get to that stage faster than I can build.  That isn’t 100% of the reality: these 2-Bits would go together in a snap, but I have a very good, contest-winning 2-Bit and the same with an Embryo.  I have no incentive to build either of those classes until I no longer have them.  In fact, I believe in my existing models so much that I might never build a different design for my own use in contests.

So, my business plan…I am going to start working more efficiently and stop wasting so much of my day.  I will draw quicker, to get plans ready and I will build more to prove my products.  Every year I write a list of models that I want to build for the next year.  My newest list is already seven models long – and that list is not complete.  I usually get 3 or 4 built, but I need to step up my game.

Part of my practice was mentioned before – I do have half a dozen or so friends that I send prototype kits to when they have an interest and when they are not busy.  I could use more builders, but I would need to accept only those that I know can build a) accurately, b) on somewhat of a schedule, c) can trim and fly well, and d) provide accurate and honest feedback about the kit, to include problems encountered and outright errors.

I will continue drawing and building what I want and what I like.  Getting those products into your hands may become a challenge, but I hope it is a challenge worth the wait for you, the customer.

2 Responses to Volaré Kits and Bottlenecks