This is not modeling related, but I thought I would share some high-level details of our 2-week driving trip through the UK.  As I said, this will be very high level and impressions, as a 16-day trip has too many real details and memories to cover here.  I had intended to do one short post daily, but on about the fourth day, my cell phone stopped working.  It had a cracked screen and it just went blank. 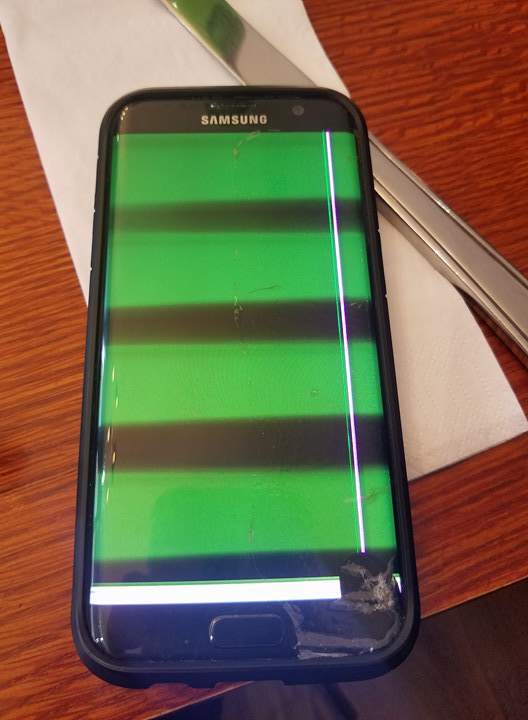 A LONG TRIP – it was 16 days.  I felt that, if we were going for that length of time, we were going to see a lot.  I opted to drive all around the UK and see a little bit of a lot of things, rather than staying in one place and seeing everything that one spot had to offer.  Was it right or the best?  Probably not, but we got to see a lot.   And in fact, I liked London the least of all – and we were there for 4 nights. I was told “you’ll never make it” when I described what our plans were before the trip – but we did – and we saw most of the things I had planned, not all, but we did add a few that weren’t planned. 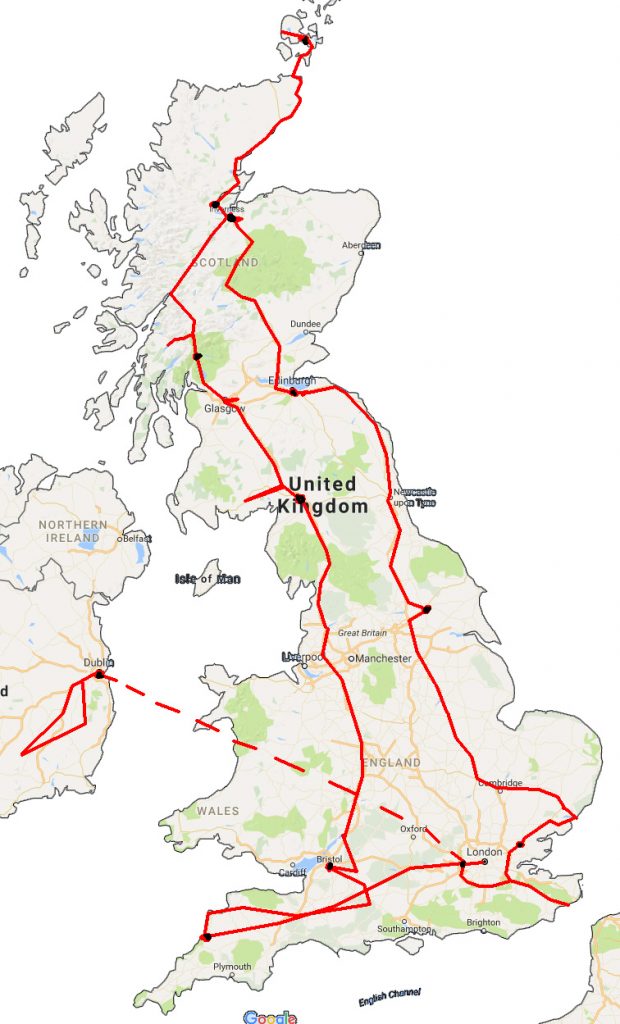 AGE – The US doesn’t have or know “old”.  Our old buildings and such are no newer than our statehood, generally.  On our east coast, there are buildings approaching 300 years old, for sure, but over there – we were in many fully functional buildings that were built BEFORE there were British colonies in North America.   Even if the buildings weren’t functional, it was amazing to think that “people were actively in this spot, with their functioning civilization, a thousand years ago” – or even older in some of the prehistoric sites. 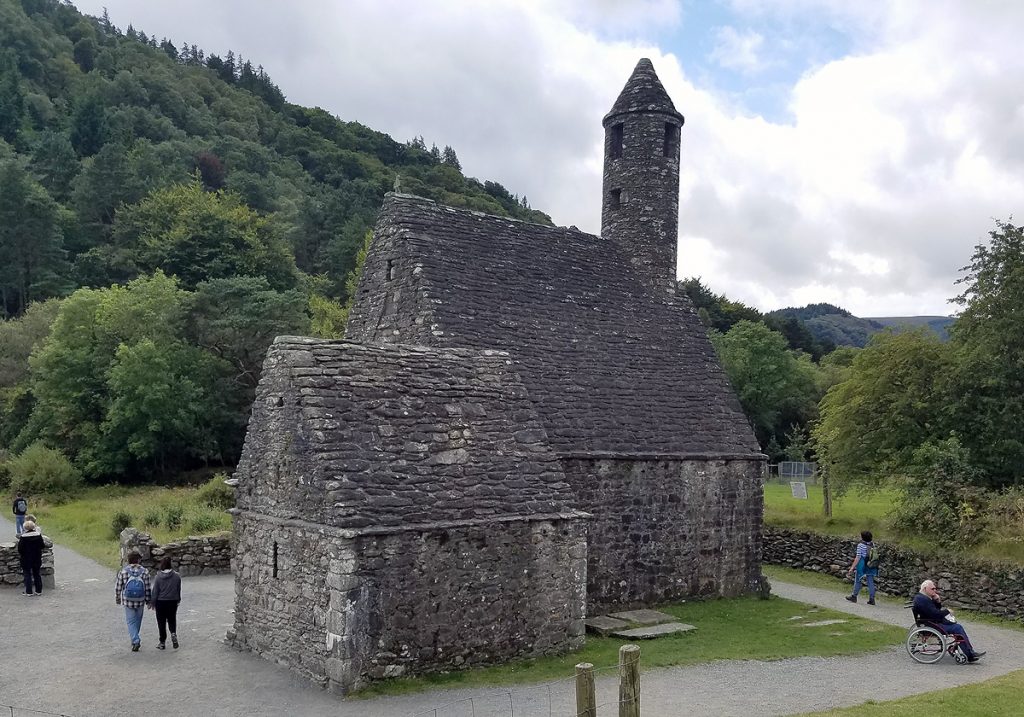 St. Kevin’s Church. Glendalough, Ireland. 12th Century church. St. Kevin lived in this very remote area in the 7th century and is became a pilgrimage location and center of learning, even as remote as it is. 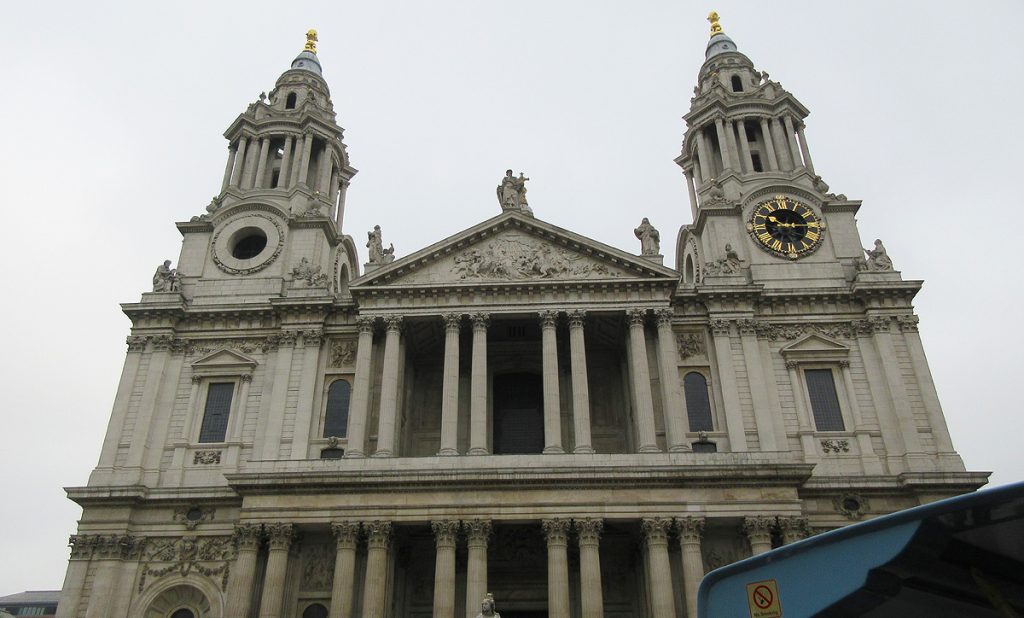 St. Paul’s Catherdral, London. Built in the late 1600’s by Christopher Wren. There had been an church of some sort on that site since the 7th century. 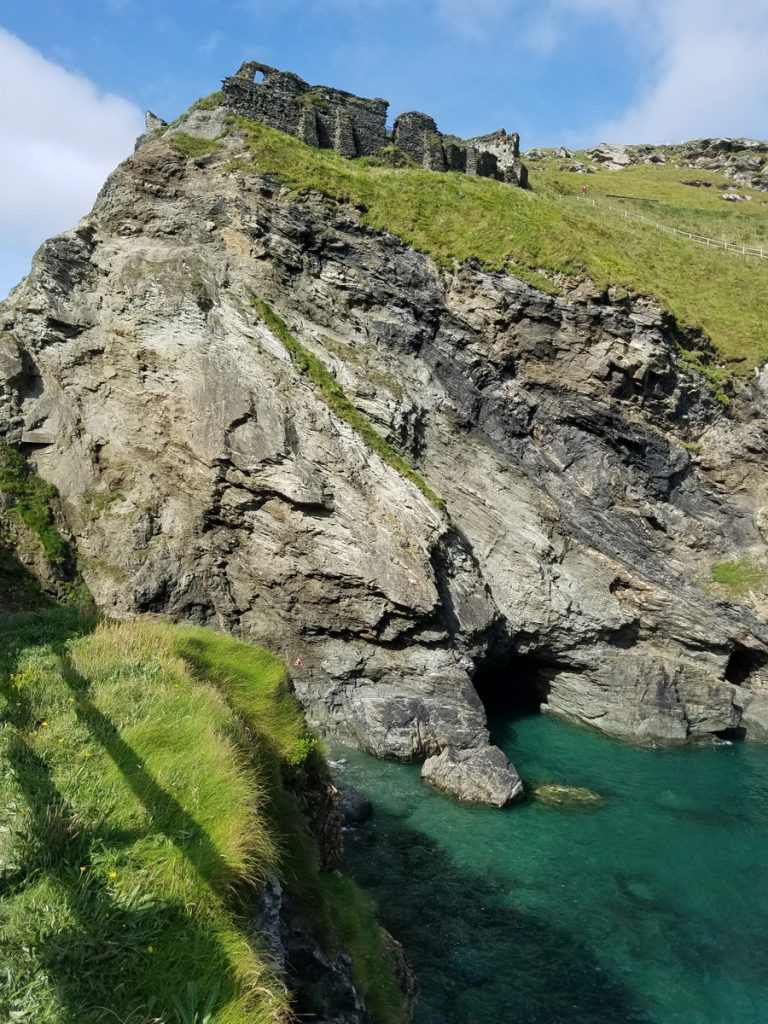 The remains of Tintagel Castle, Cornwall. It is amazing to think there was a thriving castle and community on this remote rock. There are dozens of foundations up there. What effort it took to get supplies there.

PEOPLE – virtually everyone we encountered was pleasant, polite and helpful (except for one attendant at St Paul’s Cathedral in London).  There were less obese people there than here.  Maybe that has to do with the fact that they don’t seem to mind walking places and walking a lot – or riding bicycles.  Oh, and many people have dogs and walk with them everywhere.  Dogs seem to enjoy a higher status over there – and they are well-behaved, too.  In fact, one of the most touching memorials we  saw was near Hyde Park – a memorial to Animals in War.  As it says, millions of animals, from pigeons to elephants have been used in war and “they had no choice”. 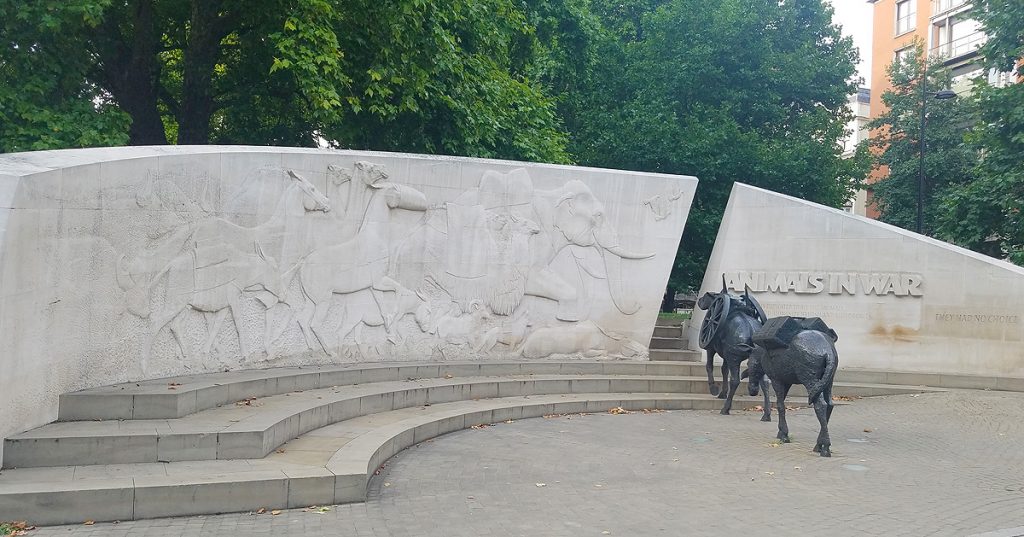 WEATHER – our weather was VERY cooperative.  We did have some light rain while driving through the Scottish Highlands, but it was neither unexpected nor surprising and it didn’t detract from the trip.  Most of the time the weather was mild with clouds and sometimes it was even sunny.  The temps ranged from a low of 11C on a couple of mornings to 24C in London.  That’s roughly 50F-75F.  We brought light jackets and no shorts and that proved to be the right call. 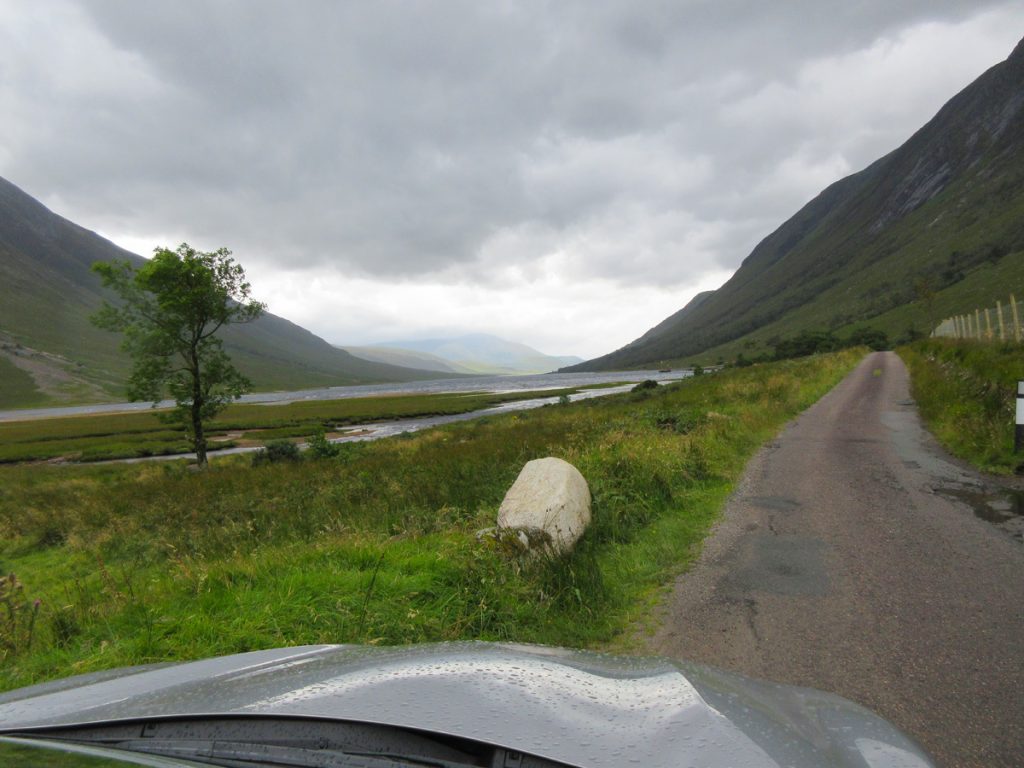 DRIVING – Driving had me worried.  I had never driven on the left before.  I started to pay attention when we got to Ireland – I did no driving there, but knew I would have to get used to what I was seeing.  The road signs are different and took some interpreting.  I had the trip all planned, with Google text printouts of every day.  They were somewhat useful, but would not have done the job.  When we rented our car, we opted out of a manual transmission – one less thing to worry about (I can drive a manual with no problems, but combine the shifter on the left with driving on the left and I thought it just might be too much at once).  The choice of an automatic changed the type of car – we got a Nissan SUV and with that came a Navigation system.  That Nav system proved to be the real hero of the trip.  It worked great and held my hand the whole trip.  I only made a couple of wrong turns and we were generally on time everywhere we went.

Driving on the left – it is strange sitting on the wrong side of the car and driving on the wrong side of the road.  Within a mile or two of the airport, I was on a freeway and that made things a little easier, except I tended to drift to the left and it wasn’t natural to put the right side of the car along the right side line on the road.  All drivers respect the lane assignments, that is, stay in the slower lane and only change lanes to pass.  Very, very few people ride in the outer lanes for any period of time, except where there is heavier traffic and it is obvious that you are going faster than the inner lanes.

Roundabouts are easier than US people think and they flow smoothly.  You just have to know where you want to exit the roundabout -and that is where the GPS really helped us.  “Exit the roundabout at the third exit and continue on the A40” – a typical GPS command.  We would watch the route numbers painted on the lanes approaching the roundabout, get it the proper lane,  wait for a gap in traffic, enter and start counting exits.  The traffic tended to naturally move outward as you approached the desired exit and I really have very few problems – I think once I almost entered into the path of a car, and only once had an issue of begin in the wrong lane.  I did miss an exit once, also, but it was a simple matter to just continue around.  Roundabouts are EVERYWHERE – at nearly every intersection of any significance, even on streets in towns.  In fact, the only real problem I had with them was when they stacked two on top of each other in a town.  Think of a five-point intersection where there was not one, but two small roundabouts adjacent to each other.  Rather than cutting through the middle where I was told to go (and I couldn’t see how with the heavy traffic) I just went around the double outside until I got where I needed to be.  Roundabouts help with traffic flow.  all people keep moving and no one stops at an intersection, unless the heavy traffic has dictated that stop lights are necessary on the entrances.  There should be more roundabouts here in the states.

One thing I never got used to was turning at a regular T or cross intersection.  If I had to turn left,I had to remember to stay on the inside and it was quite unnerving to start to turn and see a car coming at you in the outside lane – right where they were supposed to be, but right where I would be over here.  Also, right turns were equally anxious – you have to turn, crossing traffic – into the lane were 40 years of driving has taught me there will be oncoming traffic.  It never became natural and every intersection like that caused me to concentrate to make sure I was going the right way.

Backroads in England are just like you see on TV – high hedges on either side of the road and very narrow lanes – like the bushes are rubbing BOTH sides of the car.  We even went through some where the bushes on the sides had grown together over the road so we were in a tunnel.  This is quaint, but means you cannot see a) around curves and b) the countryside. 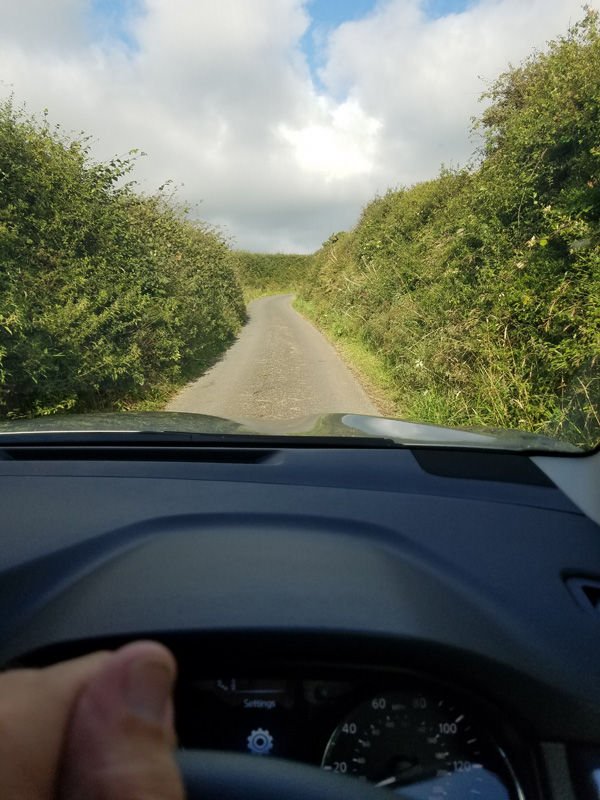 a backroad in Cornwall

In fact, I would say, except for the main expressways, all lanes are narrower over there.  A two-lane state highway equivalent seemed to be about as wide as our county roads – with hills and curves and bushes on the sides and an expected speed of 60 mph.

The last bit on Driving – there are dozens and dozens of cars in England/Europe that we never see.  In fact, I rarely saw a car model that I recognized.  And there just are not “big” cars – that is, anything larger than our mid-sized cars are very rare.  We drove a Nissan SUV a Qashqai – apparently something similar to a Rogue here in the states.  It had a diesel engine and I am sure it had a turbo.  This was the first diesel car I have driven.  I learned something – we have been sold a bill of goods when it comes to cars.  Diesel cars are unusual here, but not there.  The performance on this car was great.  In addition, it got superb gas mileage.  Take a look at these photos: 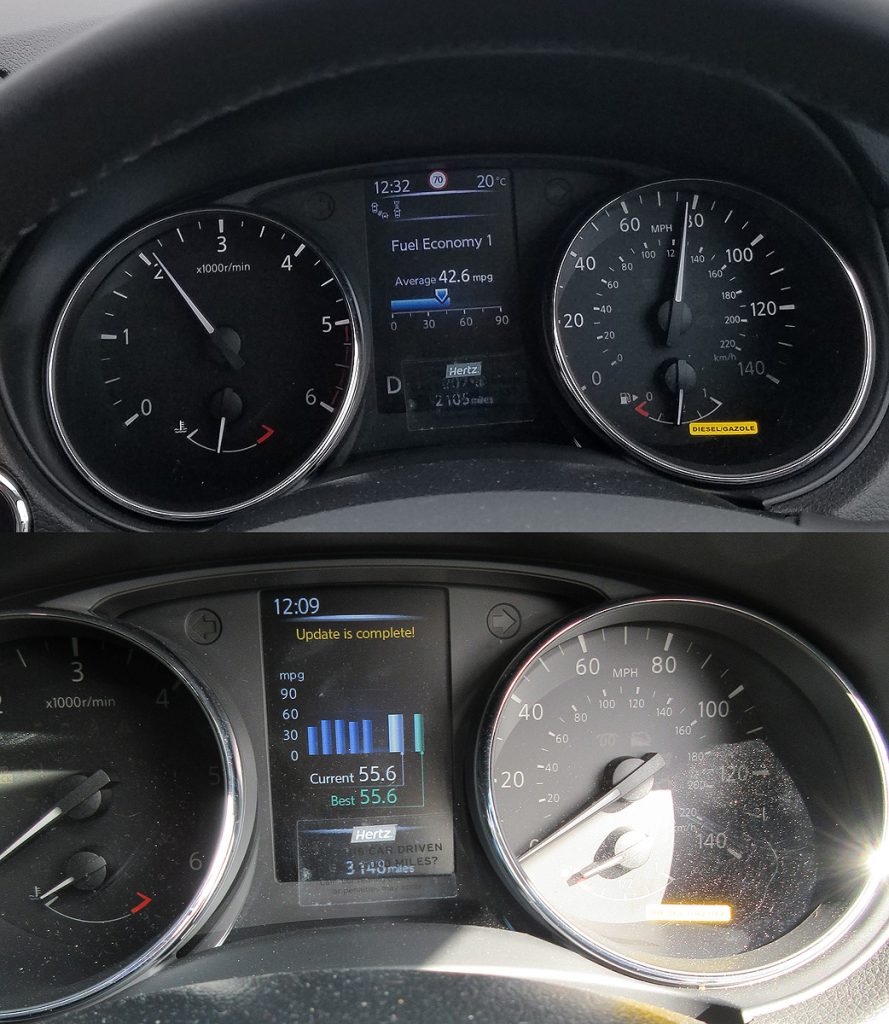 The top is shortly after I got the car.  We got it with 1700+ miles on it and returned it with about 4300.  I reset the mileage after I took the top photo and for the rest of the trip I AVERAGED 48 MPG.  The second shows the best average MPG for a section of the trip – 55 MPG.  Even after converting from Imperial gallons, that means 45mpg peak and 40mpg average.  Why aren’t we, as a country, demanding this type of mileage our of our cars?  We’ve been sold a bill of goods.

We saw a lot of things, many more than I can possibly share in this post and it is already too long.  It was a good trip.  But now I have to get back to the model aviation business!  Oh, no aviation museums, no flying contests, no hobby shops – nothing like that on this trip. 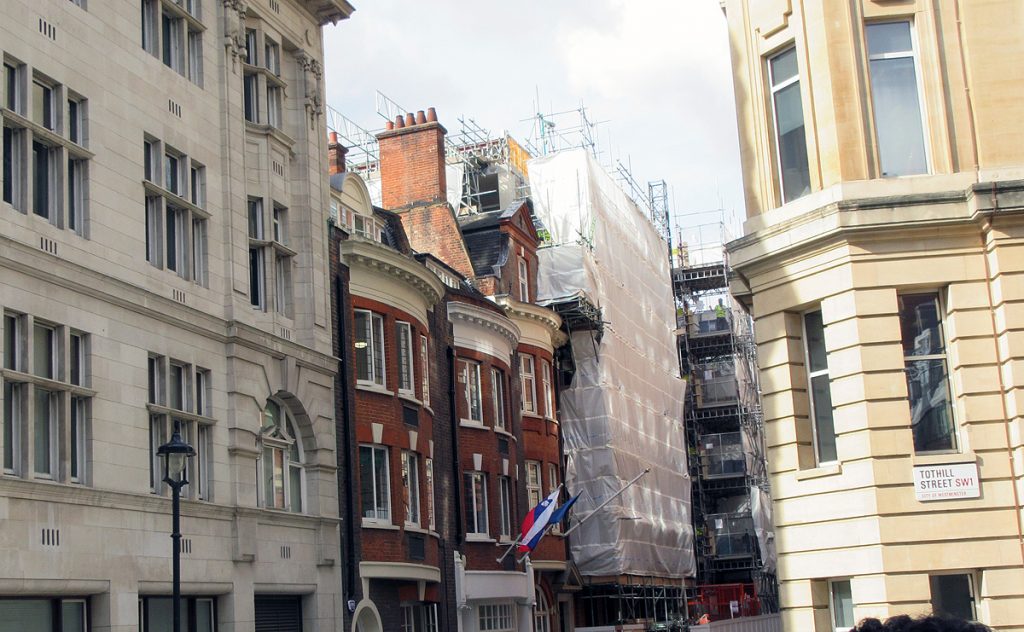 Building repair work in London. It seemed like nearly every block had some construction like this. I wish I had ownership of a Scaffolding Company in London – I’d be set for life.