A LONG story, but filled with fun and excitement!

This year, the AMA Nats were the week after the FAC non-Nats, so some of us had to travel to New York and back and then to Muncie, practically with out a break in between.  I arrived home from NY on Sunday and left for Muncie on Tuesday.  It’s been a long two weeks.

I arrived on Tuesday afternoon and met up with my flying friends.  Weather was good and we were able to get some testing in.  I had broken the fuselage of my Pepper at Geneseo and rebuilt it on Monday.  I tested it Tuesday and after a methodical process, I got consecutive max test flights (over 2 minutes).  It is ready to go for Thursday.

We had good weather on Wednesday and were flying from the southern edge of the AMA site.  It was a light schedule for me and my practice is to fly my endurance ships right away in the morning when the weather is calm.  It was OT Stick day and I launched my trusty Wanderer just as I had the week before in NY.  Wow, something was wrong.  It was stalling on the way up and the glide was not right.  My time just exceeded 2 minutes by a couple of seconds.  Now the stress sets in.  My Wanderer is good for maxing out – but not in this condition.  If I wanted to win the event, I need to fix this – but how, it wasn’t flying correctly.

I made some thrust changes and did another flight.  I put up another crappy flight that was longer than 2 minutes.  I got lucky but needed reliability to return to me.  A few test flights and thrust adjustments and it dawned on me – if the glide is bad, why am I messing with thrust!  I examined the tail – all was good.  So I looked at the wing.  I had used a 1/16″ square hard balsa shim on the trailing edge to set the glide.  It was compressed.  I added a strip of 1/64″ plywood – now I had to reset the thrust – some idiot had messed with it.

I did a couple more test flights and called for an official flight.  It boomed up with Wally Farrell’s Gollywock close behind.  I always set my fuse long because I am not sure were 2 minutes is exactly.  My plane got higher and higher.  and finally – around 3.5 minutes the DT went off and it settled into a quick and flat descent.  Wally had DT’d also but was gliding.  I was following on my chase bike and decided that if my plane would be landing on the field, I would chase his, since it looked like it was going towards some trees.

Mine landed in a tree on the edge of the property.  I noted which one and took off to find Wally’s plane.  I was sure it had gone behind the residential property and went to look.  it wasn’t in the open grass behind and I couldn’t find it quickly in the corn.  I retrieved my model and we discussed how and where to look for his plane.  Wally, his wife Julie, and I went to look on the residential property and in the corn.  We couldn’t find it and decided to return later after Wally was done flying.  Pat Murray and I did find it in the afternoon – in the corn. 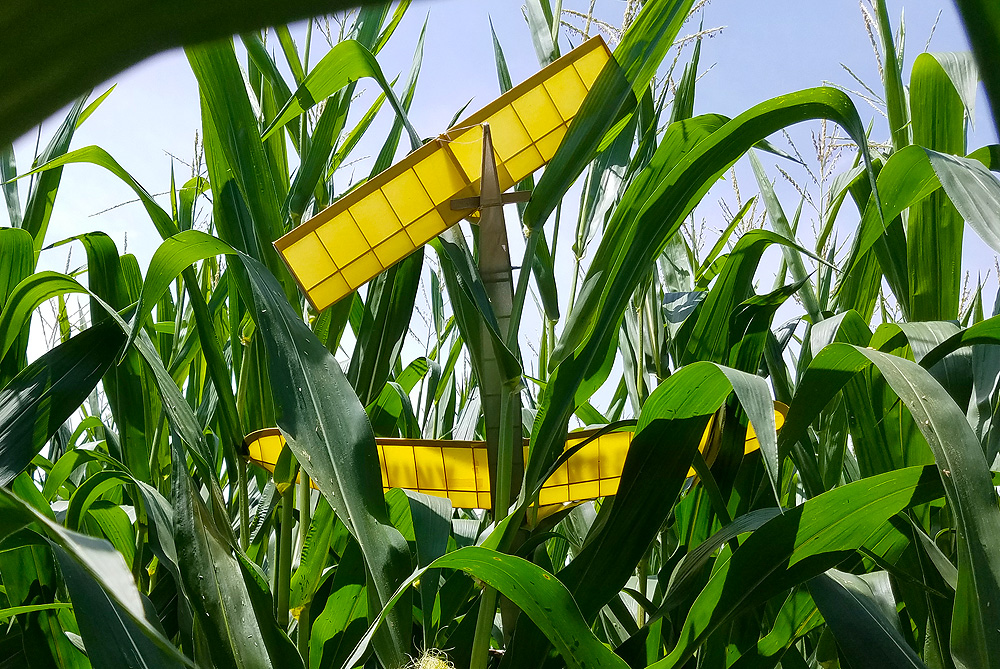 At the end of the contest, we had a 6-person fly-off in OT Stick – six people maxed out.  We agreed on a 15 minute launch window with high time winning the event.  Five of us put up long flights and one person had a DT malfunction.  The five successful flights were within 20 seconds or so in length – a very close contest and a lot of fun. 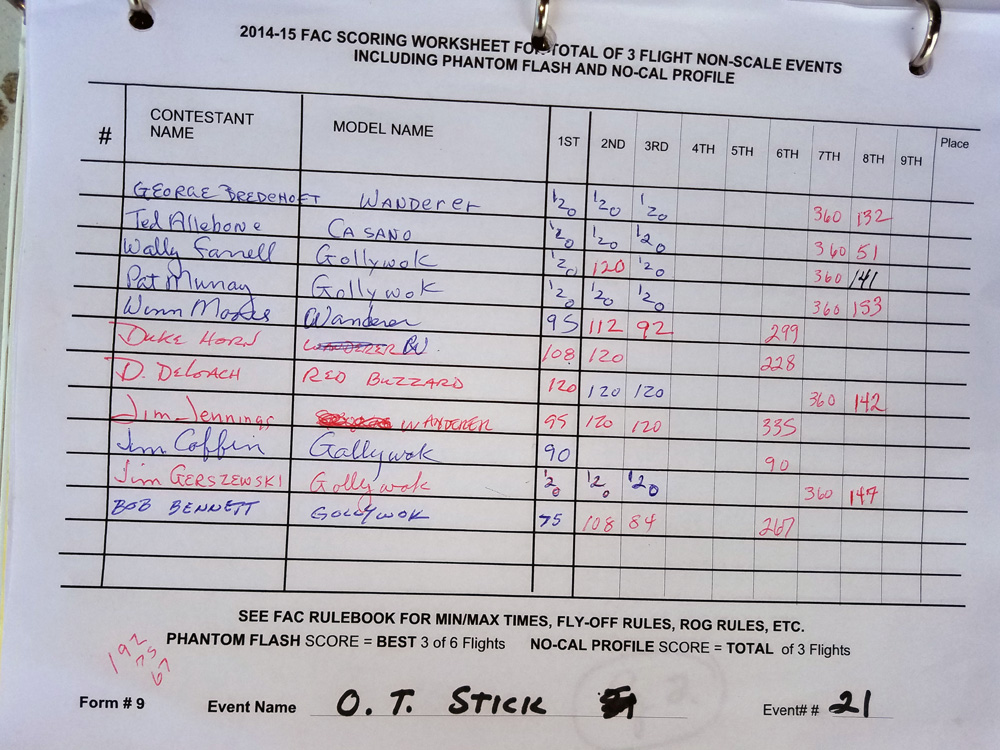 Thursday’s forecast promised rain.  It wasn’t constant rain, but the morning was wet with sprinkles, drizzle and light showers off an on until noon or so.  Since the forecast was predicting worse later, we bumped the Mass Launches up to 9am and 10am for WWII and the Races.  That left little time for my habitual Endurance launches.  I worked on the Pepper right away for OT Fuselage.  I did about 3 launch attempts before WWII – all with the same result:  low level with a bank to the right immediately after ROG into the wet grass.  It takes time to get ROG models to fly right.  First get them to fly (like I had two days before) and then get the table launch trimmed out.  This is a new plane and I just didn’t have time for the ROG part this event – the Pepper had to be set aside.

It was time for WWII.  The air was heavy with humidity – it wasn’t raining, but it had before and would after.  There were at least six of us flying in that combat.  Due to the treat of imminent rain, the rounds were cut to two rounds at the CD’s discretion.  Two would be eliminated in the first round.  The first eliminated was Wally Farrell when his Hellcat took a bad turn on launch and hit Pat Murray in the head. Ouch.  This was followed shortly by Marty Richey’s great-looking Zero hitting the drink (wet grass).  My Judy had a very stable flight and would join Winn Moore’s Tony, Pat Murray’s Avenger, and Don DeLoach’s Corsair.  We were doing self-timing, that is, we start the stopwatches on command before the launch command, launch, then stop when our plane is down and provide the times to the CD.  The Tony went down early.  The Avenger and the Judy headed north and the Corsair headed to the east.  As Pat and I chased, mine was in a very stable flight and glide slope.  Pat had got into a porpoising motion, but it was going to be close.  He and I saw that my Judy came down about 8 seconds after his Avenger.  We returned and turned in the times and waited for Don’s return.  Don reported the exact same seconds as Pat – I had won – AND beat Don DeLoach in WWII Combat! 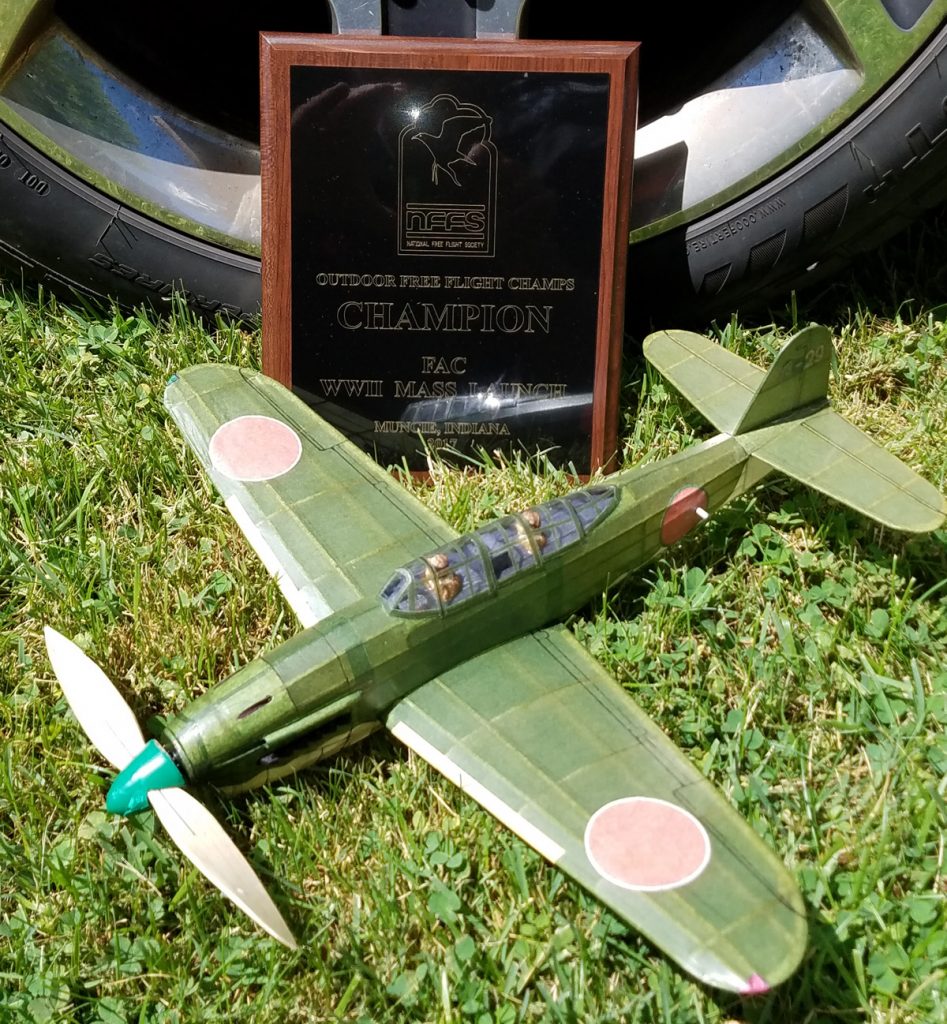 Embryo took place on Thursday and I had to get some times in on my Defending Champion, the Bad Axe.  I put up a max and dropped the second one by 10 seconds or so and then maxed the third flight – all in the misty drizzle.  Those times were much like my 2016 performance and I had to wait the rest of the day for other flyers.  The afternoon got better and we saw some sunshine.  We had to move to another part of the field due to shifting winds.  I had left the door open and now had to wait as flyer after flyer had a chance at my times.  In the end, I don’t think anyone had more than one max, let alone coming as close to maxing out as I did – and they had nicer weather!  The Bad Axe repeats as AMA National Embryo Champion! 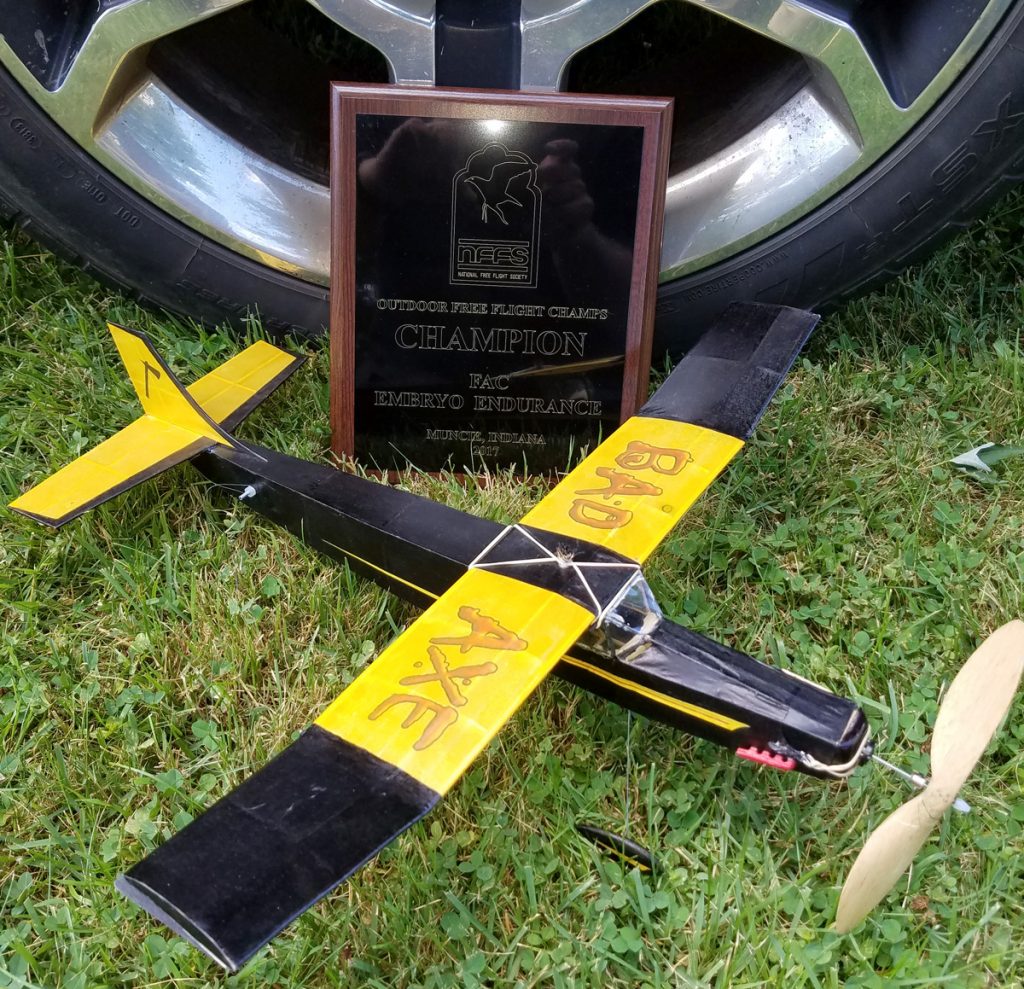 OT Fuselage was still open.  Since there was no 2-Bit at the AMA Nats, I could fly my King Harry – a consistent performer, in OT Fuselage.  Again, I did this in the wet morning and I maxed out.  And again, at the end of the day we had four people that had maxed in OT Fuselage.  We nearly had five, but Wally Farrell waited all day to log his flights.  He maxed once with his Jimmie Allen Sky Raider and send up another – it went WAY up and started drifting to the north east.  I chased after, catching up to him and Julie in a golf cart.  As we watched on the extreme norther boundary of the field, up against, a corn field, I asked why it hadn’t come down yet.  He said the DT must have failed.  After 13 1/2 minutes, we saw it come down in front of trees far away.  We returned and he was going to get in his car and look for it.  He was told he had to return and get a 3rd flight by 5pm to qualify for the fly-off – and it was 4:30.  He set off but returned within 15 minutes without his model.

So at the end of the contest, we had a fly-off:  Pat Murray (Jabberwock), Don DeLoach (Flying Aces Moth), Winn Moore (King Harry), and me (King Harry).   Notice that all of the contenders except the Jabberwock are smaller planes, eligible for 2-Bit.  Even Wally’s Skyraider was a 2-Bit.  As we started to prepare, the day’s last rain showed up.  We were on the west edge of the field and with the rain, the wind shifted to the west.  The four of us wound up and rode out to the mid-point of the field and agreed this would result in four models in the corn, so we rode even farther east.  We launched in the rain with soaked planes and Don’s Moth went straight up – he has a tremendous motor in that model.  Pat went west and Winn and I went south west at moderate height.  Mine was so wet it couldn’t climb like normal.  Pat went down, Winn beat me by a couple of seconds, and Don flew to the very south edge of the field, winning another event.  All of us were over 2 minutes again.

Friday was scheduled to be windy and it was.  I tried to fly my Turbo Goose, but it was just too windy for an untrimmed plane.  I didn’t risk damage to my B-52, so I didn’t fly Scale.  I did fly Jet Cat with my little Ohka, broke 30 seconds once, but couldn’t string together enough to get into the top three.

All that was left was to defend my 2012-2016 string of Peanut Championships.  I had my venerable Pegna P.C.1 that isn’t afraid of a little wind.  Or so I thought.  I tried for two officials and got 36 seconds each time.  A test flight with a new motor hit 1:06 so I was ready.  I logged a 58 second official third flight.

If you remember, I challenged everyone to bring a Peanut out to the AMA Nats and challenge my string.  We had several – one of which was Wally Farrell.  At Geneseo, he said he needed to get with me to talk about Peanuts so he can get better at flying them.  If you’ve seen Wally fly, you might be scratching your head now – I was.  He brought an immaculate Peanut Wittman Buster Goodyear racer.  he put in a 117 second flight, but couldn’t leave that alone, and put up another flight – and lost his plane in a fly-away.  But he is the NEW AMA Nats Peanut Champion and I settled for second place.

For the most part, we had a good contest.  We found a couple of our models in the corn and only broke a minimal number of models.  Our little group for friends did have out down moments:  Pat Murray suffered a flat tire on the FAC trailer and we had to change that after sunset when we discovered it.  Don slipped on his motor bike on the wet grass Thursday, caught the bike, but laid the hot exhaust on his calf.  It sure looked like a second or third degree burn as it blistered immediately.  And right after my WWII victory, I realized that I lost my wallet.  That was in the back of my mind the rest of the weekend and I’ve started the drudgery of cancelling and replacing the variety of cards that were lost.