My week in Geneseo, NY for the Flying Aces Club non-Nats was a success.  We had a great time and I passed some milestones and even learned some lessons about flying and preparation.  I’ll try to summarize before leaving in a few minutes for the AMA Nats in Muncie, IN. 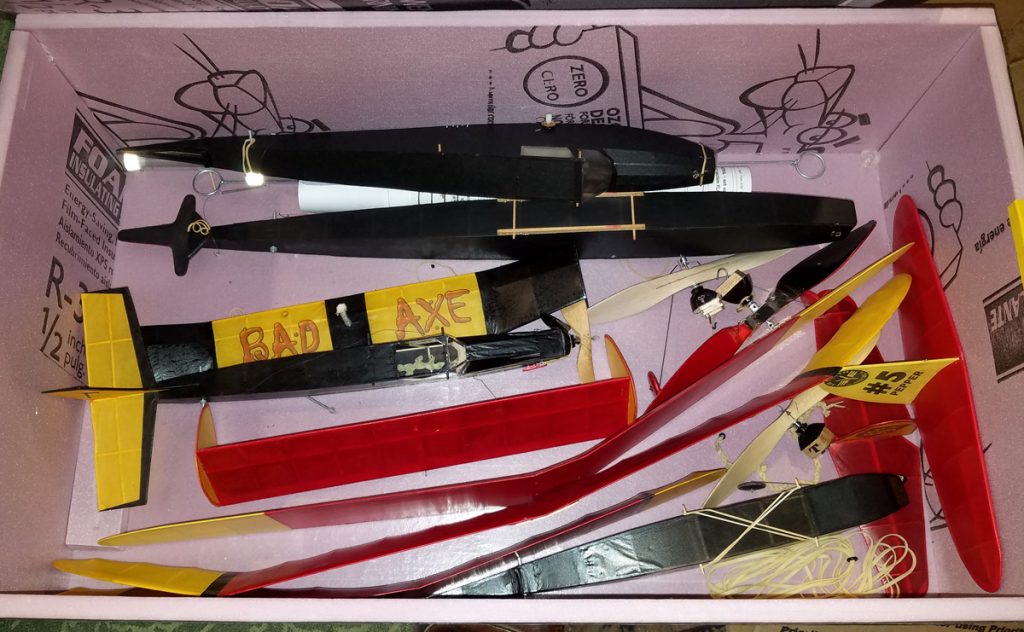 I took my Wanderer (OT Stick), King Harry (2 Bit+1), Bad Axe (Embryo), and my new Comet Pepper (OT Fuselage) expecting great things.  Like all things, there were ups and downs.  I logged eight official maxes with these planes.  I maxed out with the Wanderer and took First Place.  I maxed out with the King Harry and had a fly-off with Bobby Langelius – my 2:55 flight was not quite long enough to beat his 3:15 flight – so I took second.  In Embryo, I got a max on the first flight of my Bad Axe, but learned I need to let my motor rest – I put up two more flights in rapid succession and they got less and less.  The last flight was only a little over 90 seconds (lesson learned).  My Pepper showed good flight characteristics right off the board, getting about 1:45 flights in test.  I wanted a little more climb and a little more duration, so I made a new  motor with the equivalent of one more stand of 1/8″.  I grabbed the winder, wound up to less torque (but more winds) and took it for a test.  It zoomed, did a wing-over, and powered into the ground – crushing the fuselage back into the cabin.  Post-crash analysis revealed that I used different winders with different torque meters and wound to a much higher torque (lesson learned).  I rebuilt the front half of the fuselage yesterday and it is ready to go for Muncie 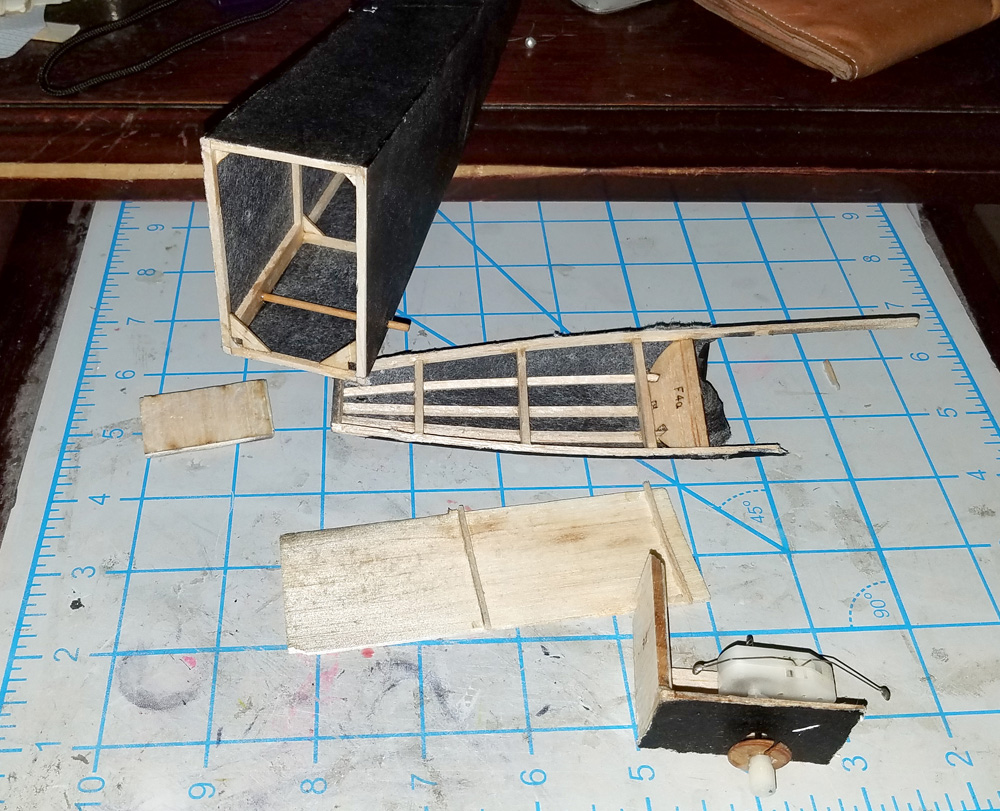 all that could be salvaged from the Pepper fuselage.

I went to Geneseo with three essentially untested scale models:  my Judy (WWII combat), my Peanut Grumman Goose, and my 30″ span B-52.

The Judy did great.  I made it into the 2nd round (of 3) in the WWII Combat – where they took out the bottom NINE.  My Judy flew for 87 seconds that round, but the cut-off was 95 seconds.  You can see my model in this photo coming right at you in the upper left. 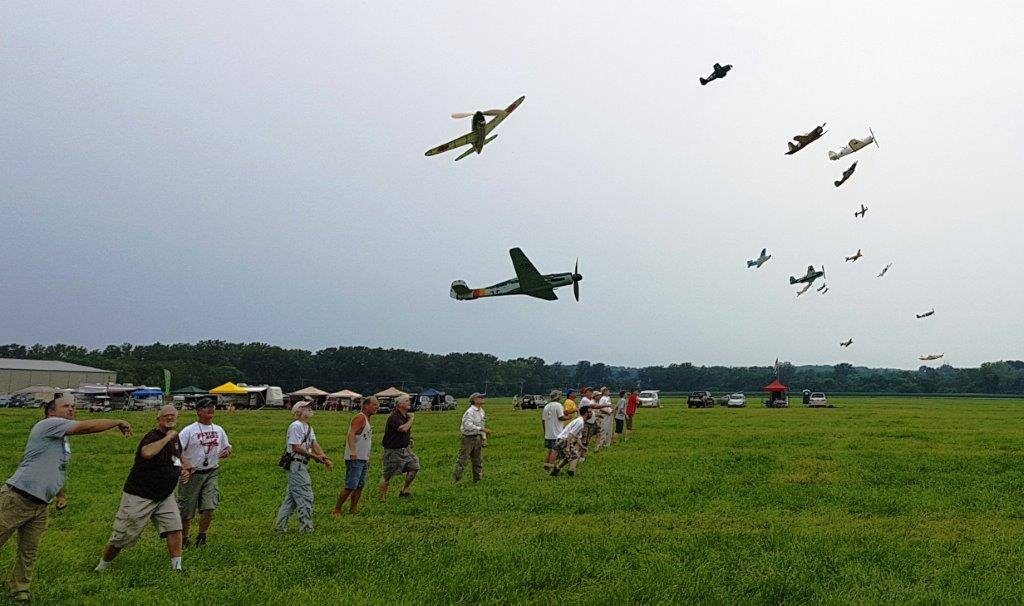 The Goose proved to be a challenge.  I had tested it on a loop of 0.050″ on each motor before and it was too weak for me.  So I went with a loop of 1/16″ in each motor.  It seemed to be too much power and we had to wrestle with thrust settings on the tiny Peanut.  My best flight was 30 seconds; good enough for second in High Wing Peanut (only because of the 35 bonus points). 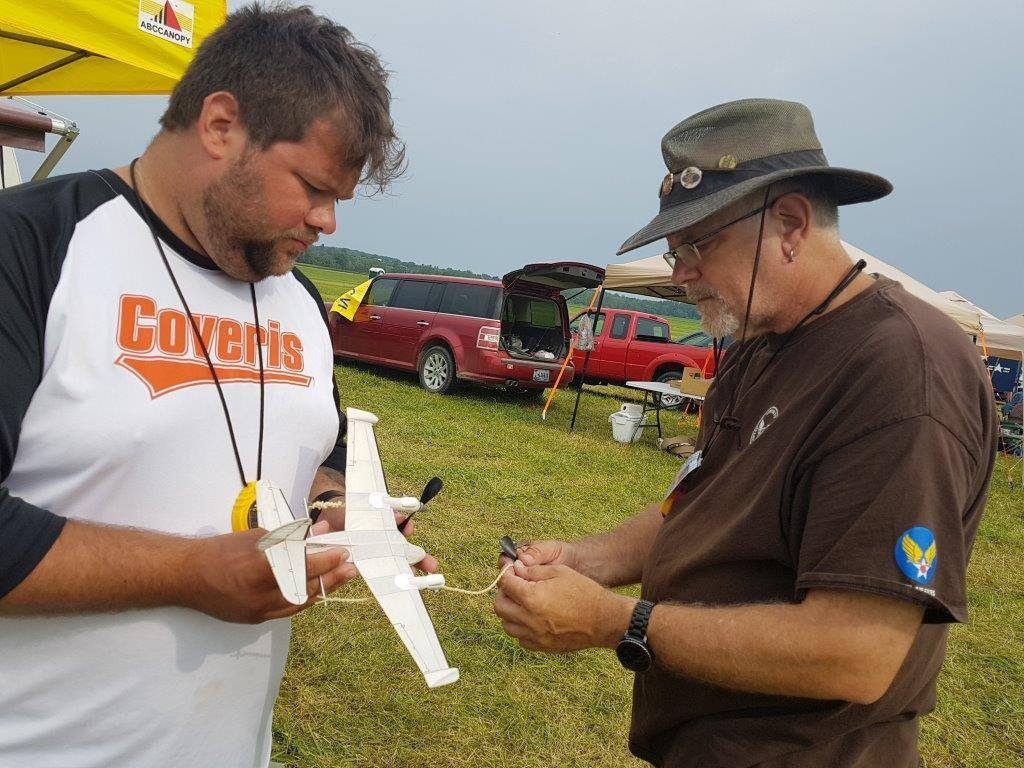 My B-52…I had literally dozens of low, low powered test flights on this at home.  My build seemed to have induced wash-IN in both tips and I struggled to get that stabilized – tests would result in a flat start and then a nose-up pitch and a straight dive into the ground.  I got that sorted for the most part, but it is always lurking in the background.  Geneseo was the first time I flew the model with the engine pods on the wings.  I have always been worried they would be very vulnerable to damage.

I saw some of the old flight patterns at Geneseo and in went in nose-first more than once.  The pods “may” have a slight stabilizing effect, whether it is from drag or from weight (the assemblies are 2 grams each), I don’t know.  Here is a video of a test flight of 43 seconds – I logged an official flight of 55 seconds.  This didn’t come close to placing, but I was happy with it!

Now I am off to Muncie for more flying fun!

2 Responses to A Quick Geneseo Report