For several years now, the Dayton Squadron has hosted an annual 2-day FAC contest in Muncie.  As it falls in June, it is generally a good opportunity to do a final trim for Geneseo on the big AMA national Flying site.  This year, however, the wind prevented any meaningful trimming to take place, and nearly blew the contest away to the northwest, but we persevered and there were about a dozen or so registered contestants.

Last year, the Dayton club said that the CD responsibilities were getting to be burdensome for their aging group, so Pat Murray and Winn Moore stepped forward to run the show – as long as the Dayton people would continue to show to fly and provide the awards (placards and pins, known as “McCookies” – see the last photo below).  They agreed and the show goes on.

The wind was… well, let’s say “aggressive” all weekend.  Event the evenings and mornings saw wind of about 7-10 mph and the mid-day winds were in the 15-20 range, with gusts much higher.  It was quite a challenge to get planes to fly, especially those that were light and well-trimmed for light and variable conditions.  The wind forecast definitely caused some flyers to stay at home.

I will recall here two events from the weekend.  The first was watching Tom Ersted flying.  Tom is one of the Dayton crew and has usually been found at the HQ tent doing scale judging and almost never flying.  This year, Tom flew in at least four events (P-30, Embryo, Phantom Flash, and NoCal).  Tom would go up on the hilltop, where the wind was strongest and launch his Phantom Flash.  He put up three flights of between 60 seconds and 90 seconds each and easily won the event – for his first kanone!  He also flew in NoCal and 2:20 flight that was OOS (even with binoculars) and still going up.  He lost his Embryo with another OOS flight on his first flight.  Well done, Tom – you’ve got some building to do!

The other significant event was the awarding of the coveted FAC Blue Max award.  The FAC awards these to contestants that surpass the 16-kanone level.  It is the one and only FAC Performance Award excepting the century-mark kanone plaques.  This was awarded to Elvin Buchele, an old-time modeler from Toledo.  He usually shows up at the larger FAC meets in Muncie.  When I told him that Stu Weckerly had passed away (I knew they were friends) he recalled that Stu was a nice guy and had driven Elvin and another teen to the 1951 Nationals in Texas.

Well, as I noted in the medal presentation, Elvin always leaves the Muncie contests before the awards ceremony and I have been waiting for two years to give him his Blue Max.  Sunday, we decided to have a presentation mid-day, before he left.  We called all the flyers over to the main tent and presented Elvin with his Blue Max. 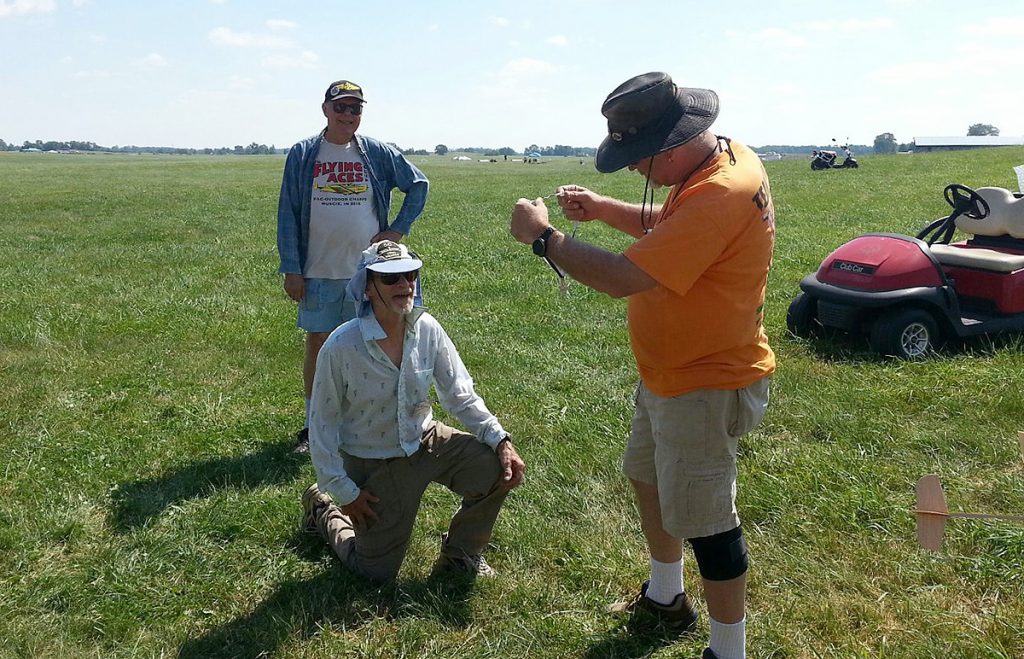 George Bredehoft, Keeper of the Kanones, awarding the Blue Max for 16 Kanones to Elvin Buchele, as Stu Cummins observes.

Here are the Kanone Events Results.

We also had entries (and awards) for the following events.  They did not earn kanones as there were not enough flyers or they are not FAC events:

Here is one flyer’s collection of the ever-popular “McCookies”, awarded for First Place in an event. 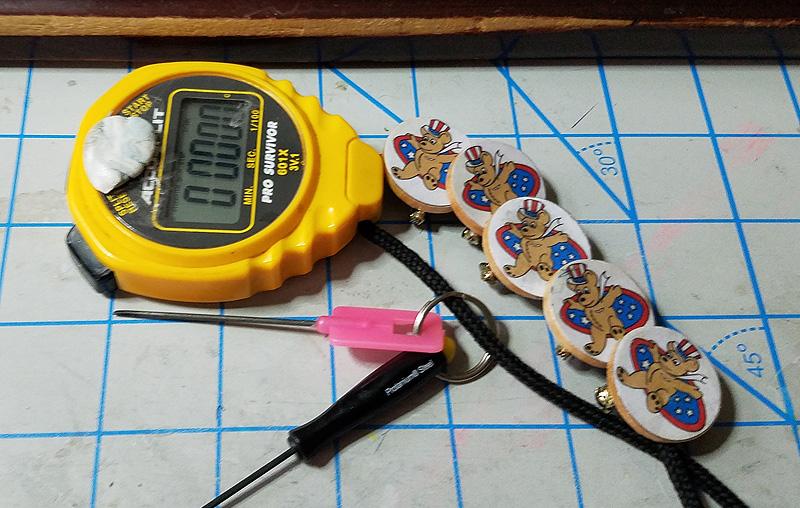