I spent much of the day testing rubber motors and preparing for the Cloudbusters monthly indoor contest this Thursday.  I was replacing a missing bobbin in the back of my Peanut Pegna P.C.1.  I took the motor out, replaced the bobbin and reinstalled the motor.  I gave the long motor 3-400 winds so that the braiding would shorten it up when it unwound.   All wsa good until half way through the unwind when the sound of rubber slapping the fuselage told me that the motor had broken.

No Big Deal – I made a new one, and replaced the same way I had the first.  During the winder-prop exchange, the lightly wound motor slipped through my fingers and went to the back of the fuselage.  For a micro-second, all was well – until my left hand instinctively tried to grab the motor.  Said left hand was holding the nose of the fuselage at the time.  The rubber did NO damage; the left thumb went through the nose: 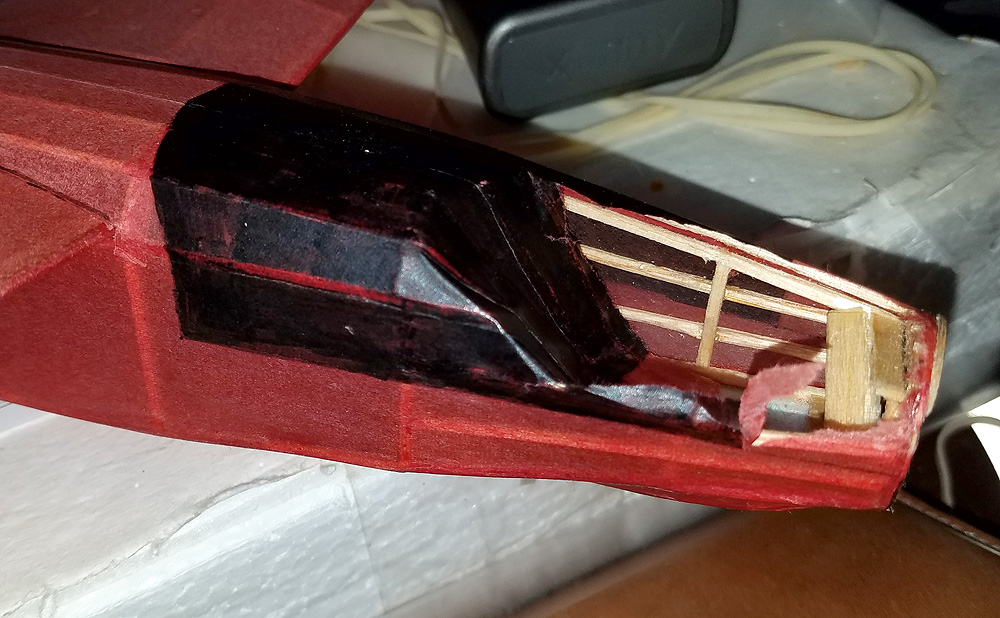 I was all thumbs

~Sigh~  This poor plane – it is a workhorse.  I have had this model for at least 24 years; its first kanone was recorded in 1993.  It has had major rebuilds two times.  I have come to depend on it to strike terror into the hearts of Peanut competitors in the tri-state area.  Oh, and it’s a four-time AMA Nats winner in Peanut! 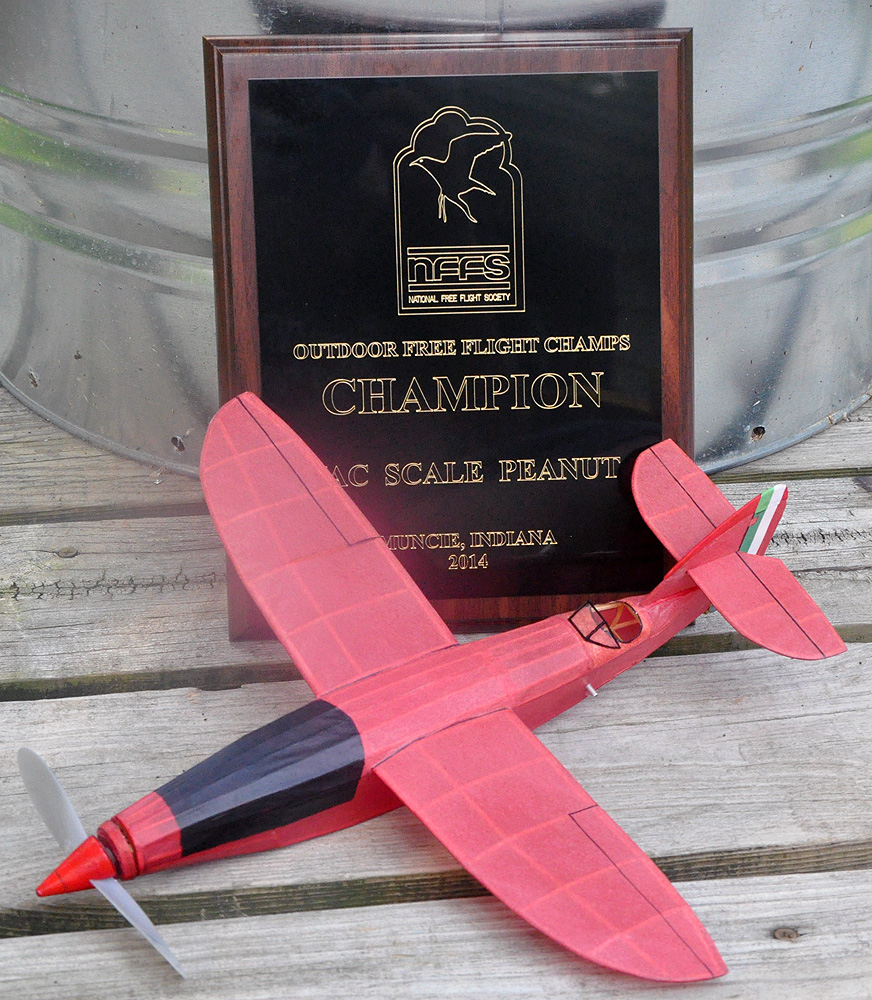 There was only one thing to do – “we can rebuild it; we have the technology” (bonus points if you remember the source of that quote).  So, I got to work.  Here’s the new structure: 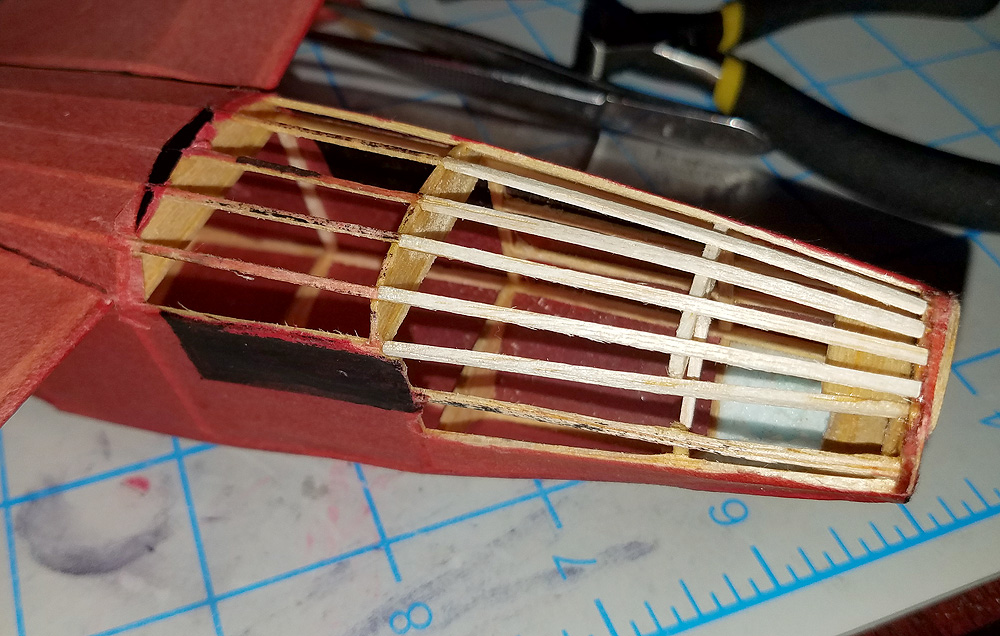 Now one thing about building this model is there is next to no documentation.  However, my quick and easy black marker is a poor representation of a copper/bronze surface radiator – and scale judges have commented just that.  So, I decided to put in a little more effort this time.  I had some party store gold tissue in the workshop, so I dug that out.  I also dug out a small bottle of black india ink and a paper towel.  I put a few drops on the folded towel and, with the gold tissue flat and smooth on my bench, I wiped over the tissue.  Then quickly wiped it off.  The results are definitely not bad (still not perfectly scale in detail)! 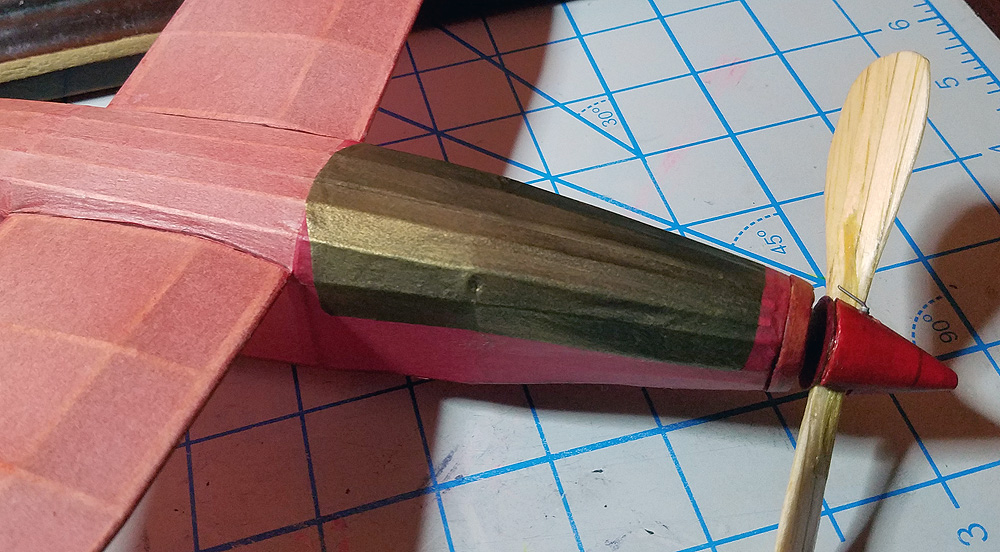 Anyway, after it’s third major repair and 4th covering job, it is ready for Pontiac on Thursday!  There probably another one of these in my future, but not just yet, this one has been too good for me to give it up.