“I coulda been a contender!”

This is an inspiring, if not sad, tale of my Indoor Embryo experience this weekend.

Sunday, our club (the Detroit Cloudbusters) held their annual Indoor Fling contest in the huge Ultimate Soccer Arena.  This indoor venue covers a full soccer field, roughly 250’x360′ and is 40′ high on the sides and 70′ high in the center.  The ceiling has girders, of course, but there is plenty of space to get in great flights and you should be able to trim just about any plane to fly within the confines.

Being an outdoor flyer, I don’t have much opportunity, nor much cause to fly indoors.  In fact, I only fly one or two indoor events a year.  Saturday morning, I was contemplating the contest over my morning coffee, reviewing the event list and what planes I have that could fly in each.  Embryo was on the list and I had been casually considering building an Indoor Embryo for a month or two, but hadn’t got around to it.

Over winter, while thinking these thoughts, I had modified an existing plan (that I knew to fly well) to be bare minimum structure, but had not done any building.  I had two tasks for Saturday: grout the tile backsplash in the kitchen and pack the truck for the contest.  Well, three actually – getting a haircut got cut from the list as I made a decision:  I planned to squeeze building an entire plane from scratch in between the kitchen work and the truck packing.  I couldn’t pack the truck too late since we had to leave about 5:30 in the morning for the 2 hour drive over to Pontiac.  So…9am to noon was spent finishing up the backsplash – lots of work, but it looks good!

After lunch, it was time to jump in.  The clock started at 1pm.  By 1:30, the wing was built.  By 2:10, the tail surfaces were built.  By 3:30 the fuselage was framed up.  By 6:45, everything was covered.  And finish assembly, nose block and landing gear put me at 11 grams and 8:30.  Test glides showed that I took too much weight out of the tail.  For me, that’s record time for a full-bodied plane.  I packed up my planes, packed up the merchandise and got to bed around 10pm. 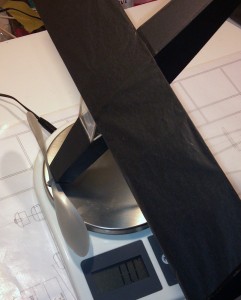 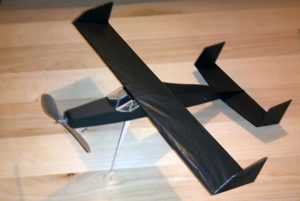 11-12 grams on this 49.5 square-inch plane gave me hope that it would be possible to power this plane with a long loop of 1/8″ rubber turning the 7″ prop.  The first task was to get the plane balanced and trimmed for circular flight.  I used a short motor and was pleased to see slow-climbing and slow-flying large circles, even though the circles could be a bit large.  Testing on this short motor (about 1000 turns) produced flights in the 40-50 second range – right where I hoped! 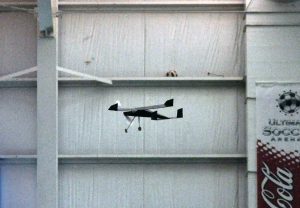 I eventually got a longer motor installed (and fixed a faulty rear peg) and got about the business of re-trimming.  Things were looking good, but I just had to get those circles smaller.  I was getting a slow steady climb-out and I knew I would soon be able to put in some respectable official flights that would challenge for the lead.  Unfortunately, the fickle finger of fate pointed at my plane.  I couldn’t get the circles trimmed just right and at around 50 seconds into one of these test flights, my plane had drifted to the edge and, at about 45+ feet, it go caught inside what appears be part of the ventilation system – irretrievable. 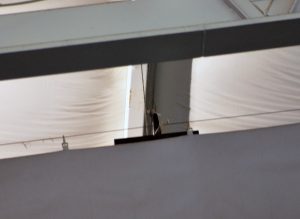 So ended my attempted foray into Indoor Embryo.  I won’t be taking that trip for about another 11 months!