Posted on 9 December 2016 by Bredehoft

Yesterday was the 2nd Cloudbusters Indoor contest of the year.  We are able to fly at an indoor soccer arena once a month.  We only get 4 hours, but it’s 4 hours of fun.  For me, it’s a full day, since I have to drive 2 hours+ just to get from Battle Creek to Pontiac, but I am glad for the opportunity to fly.  I am told it is a Cat III site with a 72′ center and 40′ height at the walls.  And the floor is a full sized soccer field.

I took three new planes – that is three new planes since last month’s event.  They are: a Martin MO-1 Dime Scale, a Turbo Cessna 195 NoCal (hoping to break 3 minutes), and a Blatter 40 (simple ROG stick). 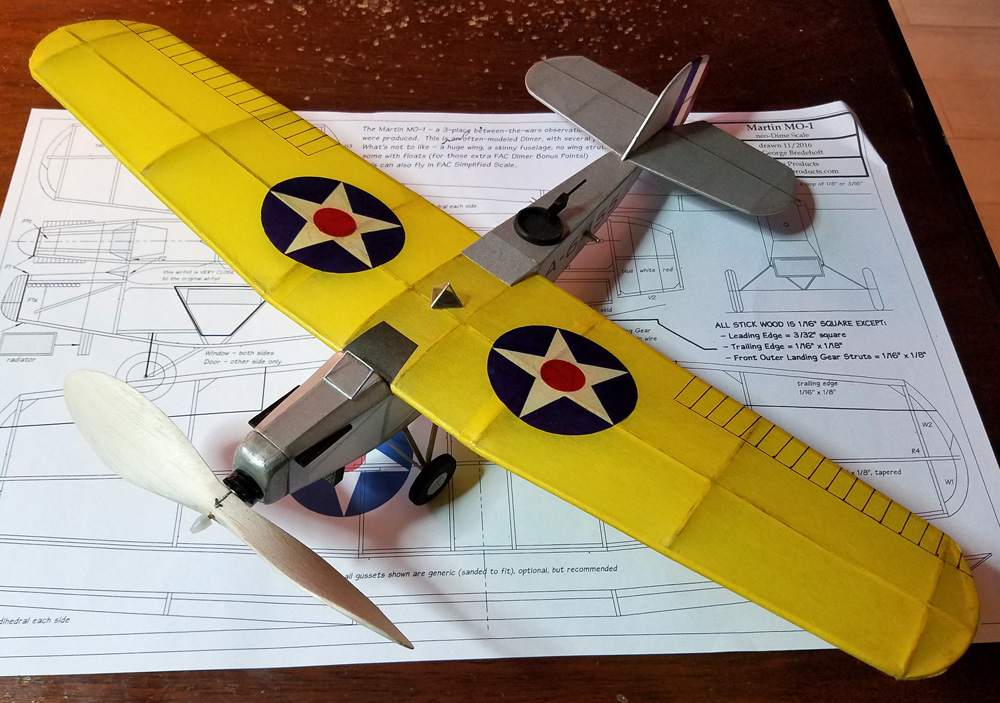 The Martin MO-1 is one of the most popular Dime Scale models – mainly because of the huge wing and no struts and simple fuselage.  That’s why I designed this plan and my model came out to be 12.5 grams without rubber.

Yesterday was the first time I was able to fly it other than a proof-of-concept test-hop in the back yard.  After about 3 little tests in the arena, I wound it up and called for a time.  It was a little porpoise-y but did real good – I think the first flight was 61 seconds.  I went ahead and put in two more, and sealed the win in Dime with a 3 flight total of 159 seconds (plus 1 bonus for down-and-dirty landing gear!).

It will be in the next issue of the Cloudbusters Newsletter (per FAC Rules) and will soon be available as a Short Kit.  I already have a page up with Documentation (right here). 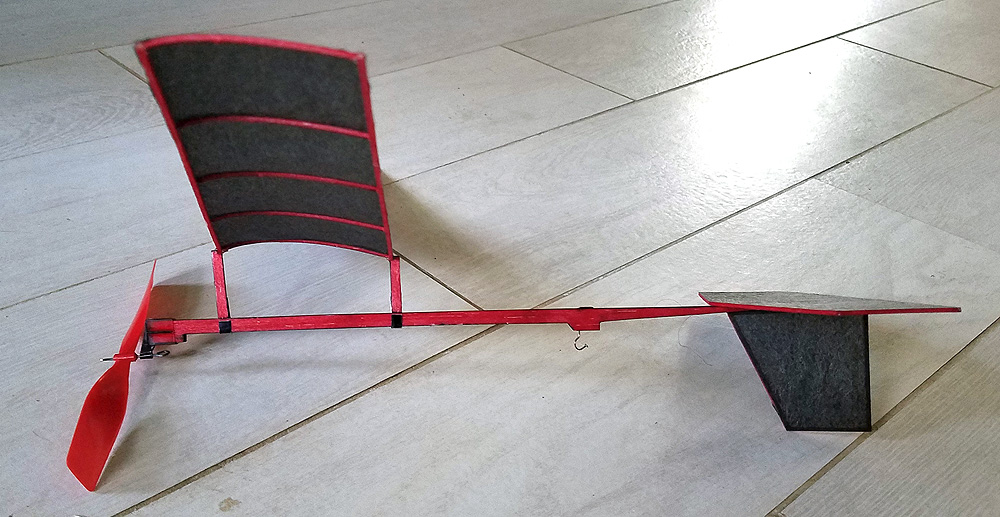 Required Landing Gear added after this photo was taken (and the wing IS tapered)!

The Blatter 40 is a 40 square inch simple indoor ROG Stick model.  The Cloudbusters have a perpetual trophy for the overall winner over the indoor season.  I have never built one and decided to give it a shot.  I got the plan from Mike Welshans and started to work.   Part of the formula is “build per plan” and “must use unmodified Sleek Streek prop assembly (or equivalent)” – plus best 3 flights out of 4.

I decided to color my sticks red with a Sharpie and use black tissue – no reason, just for fun.  The model came out to be 5 grams and I put in a 20″ loop of 1/16″.   This thing rose right off the ground and spiraled right up to the rafters.  It flew great.  The turns ran out while the model was way up there – I guess I can put in a really long motor and if I can keep it from banging into the rafters, my times should be spectacular.  My best flight was 2:25 and the 3-flight total was 380 seconds – for the win.

I am working with the Cloudbusters to put this together in a low-cost starter short kit.  The current idea is a laser-cut sheet with enough parts for 2 planes, 2 prop assemblies, and the plan with history for something like $5. 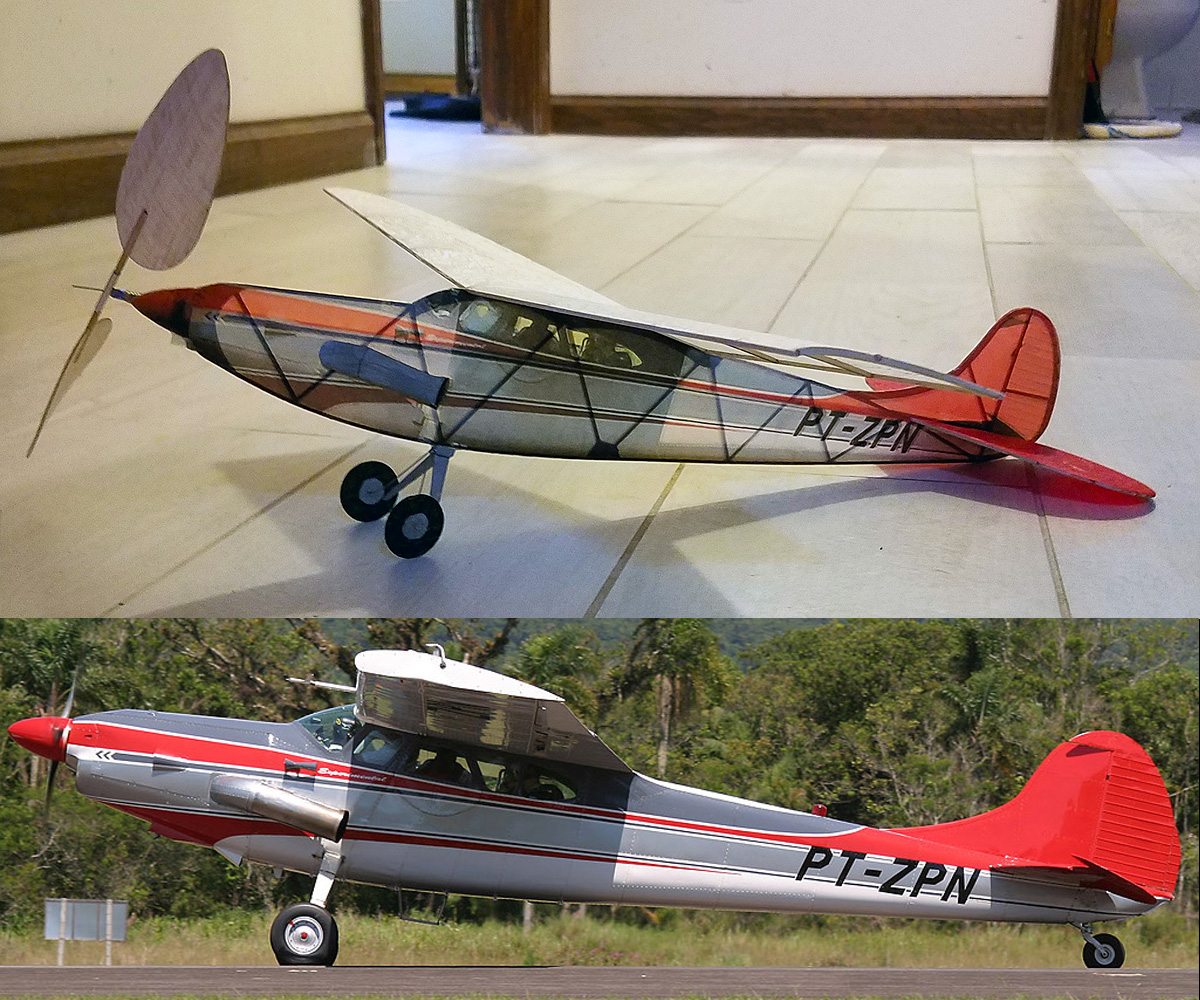 I have had my eye on this Cessna for awhile.  The Cessna 195 has a classic layout and is a beautiful plane.  For modeling, is has a long fuselage and no struts.  The normal version has a short nose with a big fat radial engine.  I searched for turbo high wings and found this particular example.  In addition to having a Garret turbo tacked on to the front, the circular wing tips were clipped off.  This combo makes for a great NoCal:  the fuselage is 16″ long and the wing has 54 square inches.

I wanted to build an Indoor NoCal, but not one of those 2-gram can’t-touch-without-breaking types.  I had read Don Slusarczyk’s web page on building NoCals over and over. (It is no longer live on the web, but I will have an updated version here in the future.)  He talks about NoCal design at 3 different tiers and a the middle tier was focused around 50 square inches.  I thought I could get into that.

As I built this, I was emailing Don for tips.  What I projected as 8 grams came out to be 6.  And it has “my” construction techniques – that is, laser-cut parts for kit production and basically an outdoor NoCal structure.  I really think this plane would work well outdoors, too – with a different prop, obviously.

With Don’s remote guidance in mind, I gave it a couple test flights and then I loaded up a 20″ loop of 0.105″ rubber and cranked in some turns.  Here is a video of that flight.

I’m really pleased with this.  To me, it shows a lot of potential, still I would like to hit 3 or 4 minutes.  I am working with Don to create something special for the NoCal community; basically a way to replicate this performance for yourself, complete with instructions and prop blade blanks.  Stay tuned for that – it shouldn’t be too far off in the future.  There will be a fuselage image for printing tissue to download, also.

I broke off the nose bearing right after that flight, so I didn’t fly it again.  Besides, I had lots of other flights to put in on several other planes.

Missing from this (poor) photo is my F-4 Phantom II that took 2nd in Jet Cat.  It has a best single flight of 13 seconds – amazing for me and that model flying indoors.

So, among other things, Thursday’s performances make for a Happy Friday!