This blog post will cover something I almost never do – the build of a kit (other than my own).

For a couple years, I’ve wanted to “prove” that a couple of specific kits that people automatically discount are worth building and can fly.  The kits in the Guillows 900 Series are designed as quick-building and simple planes.  Being slab sided, most of the series are not very close to scale (I find the Typhoon particularly offensive), but the Chipmunk (kit #903) and the Mustang (kit #905) are close enough to work for FAC purposes.

For the last two or three years, I’ve been flying Peanuts in WWII Combat – my Stuka and my Barracuda.  The Cuda was smashed by Hung this September and my Stuka, while it looks good, is getting long in the tooth and just doesn’t perform like it used to.  The Cloudbusters will be glad that I retire them, as I these two combined for 8 local WWII kanones over the years.

So…I decided to throw together the Mustang for the last Cloudbusters outdoor contest next Sunday (hoping the weather cooperates).  I really wanted to build it in the colors of 1955 Costa Rican P-51s, but I cannot figure what events that might fit in, other than just Scale (won’t do for WWII nor Modern Military).  I wanted to do all tissue covering (no paint) and I wanted to do green, but there are no “simple” green P-51D schemes, so here is the color scheme I chose: 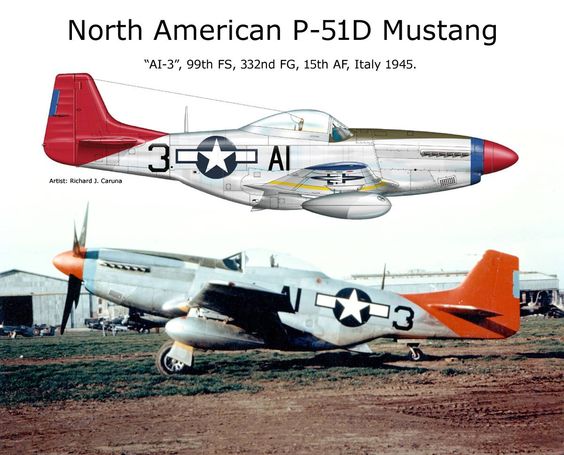 Here are some progress shots:

The slab sided fuselage.  This isn’t quite as bad as it looks.  These sides are 1/20″ balsa, as are the formers.  the sticks are 1/16″ balsa.  It builds fast – but remember to open up the internal former holes for the rubber.  I did not lighten any of the fuselage sides, as I want to build this per the kit (for the most part). 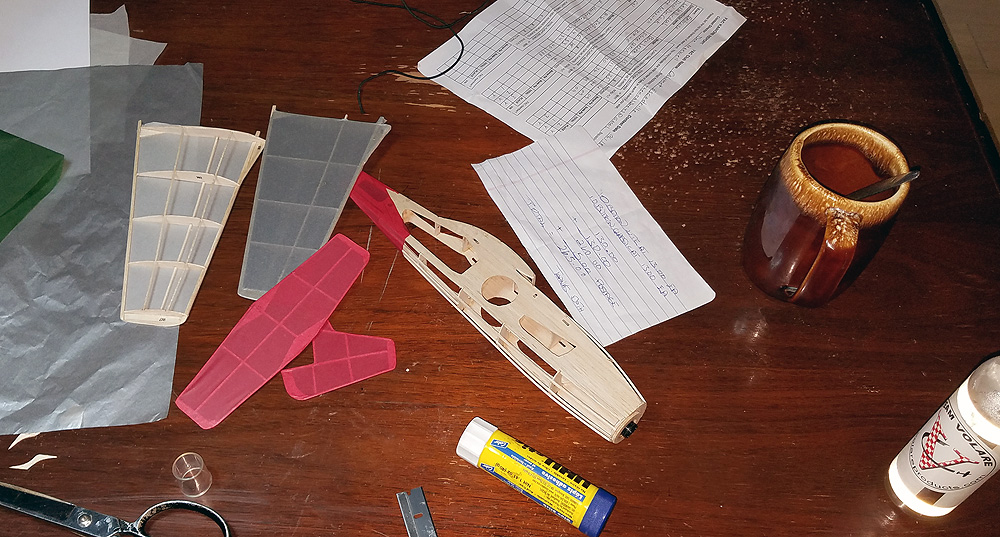 Covering has begun.  As I said, I wanted to do this all in tissue – for simplicity. 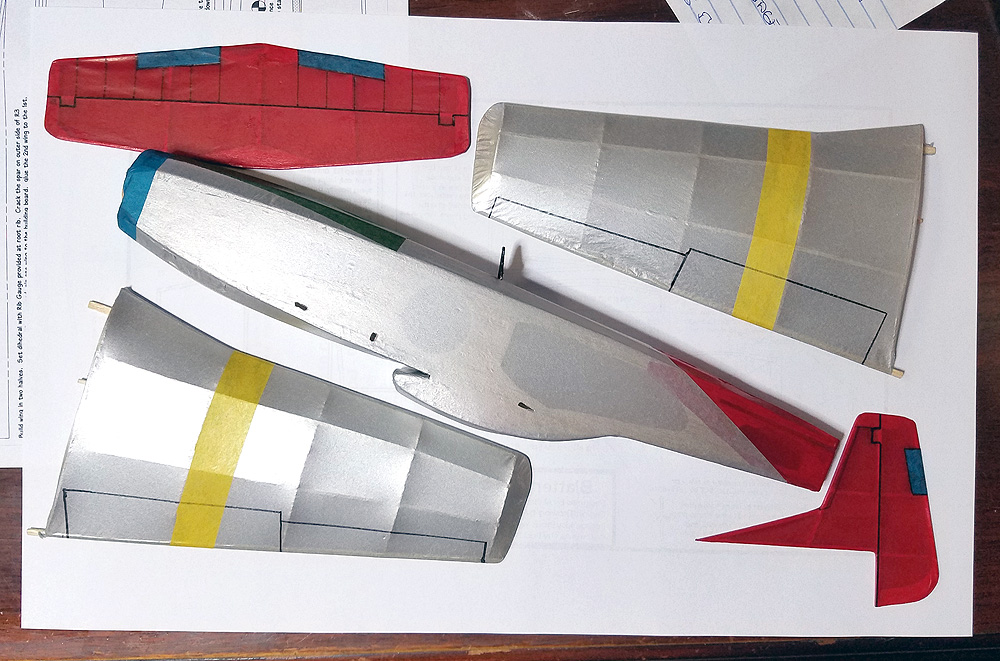 All parts covered and panel lines are started.  I forgot the blue wing tips – oh well.  And it is a little tricky to get perfectly smooth tissue on the compound curves when you use silver Esaki. 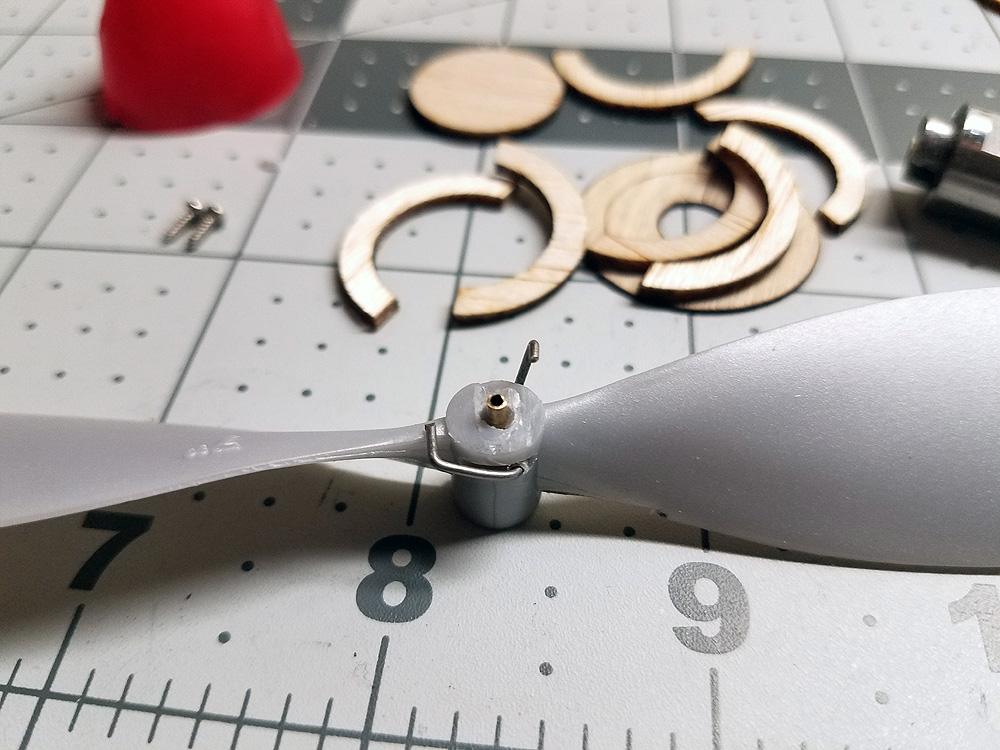 I decided to try something new on the prop.  This is a 7″ chinese prop.  Throw out the kit rubber and prop – in the wastebasket – do it first thing so you will not be tempted to use them!  I wanted a freewheeler with positive action even if the rubber is tight.  I selected the Nason-type clutch (read the how-to HERE– from the How-To archives) as it will completely fit under the spinner and there is plenty of meat on the prop hub to do a modification like this.  I also notched the back of the spinner so that I could put a 1/64″ ply disc on the back and build up the spinner base with 1/16″ balsa half circles.  I used canopy glue to hold the spinner onto the base. 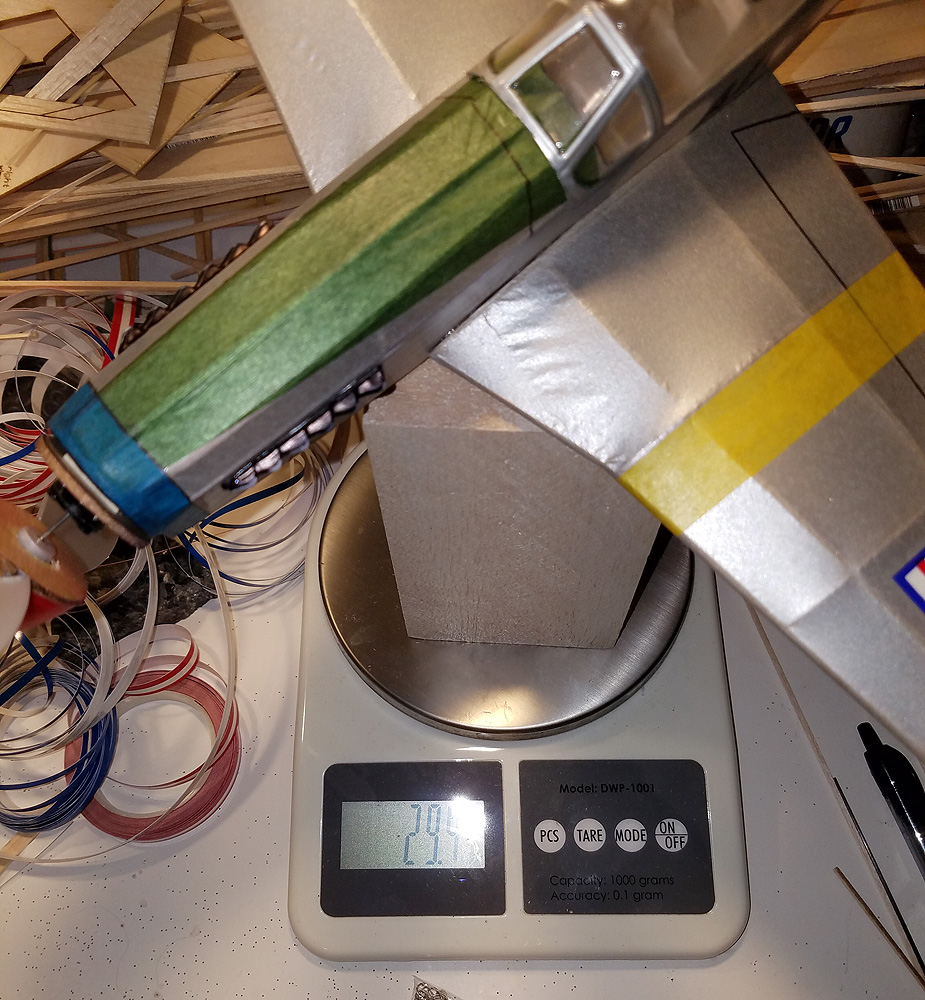 Total all-up weight without the rubber is 30 grams.  That’s not terrible for a 17″ span scale kit model.  Yes, totally scratch built would have come out lighter, probably closer to 25 grams, but I think this will do just fine.

Testing on a very short loop of 3/16″ shows great potential.  It really flew right off the board.  I had to add a bit of clay to the nose (still keep taking small pieces off).  And I had to dial in thrust adjustments with the Gizmo Geezer nose bearing.  But a couple hundred turns gave me very stable left hand circles.  Do your initial testing with the spinner OFF so that you don’t damage it while trimming.

One thing that I still need to work on is recessing the Gizmo Geezer nose button.  I had this all set and the gap between the fuselage and the spinner was going to be about 1/8″ – very acceptable.  However, as we prepared for the first test flight, I realized that I had NOT built in any capacity for a removable nose block.  fixing this problem stuck the nose button out and the gap is now a gaudy 1/4″-to-3/8″ – not very pretty.

In summary, I think the Guillows kit #905 would be a great Beginner’s introduction to Scale and/or WWII Combat.  We will see how it performs on Sunday (06 November)!

See you at the flying field!

1 Response to Something Different – Kit Build