Posted on 27 September 2016 by Bredehoft

Video at the bottom…

When we arrived Wednesday afternoon, several people were already on the field test flying.  The weather was beautiful.  As we test flew planes, you could not help but stand and watch Tom Hallman flying his Mega (54 inch wingspan) Nicholas-Beazley NB-3.  It flies in the most calm and amazing way.

I had my new Found Centennial Peanut out test-flying during one of Tom’s flights.  His plane went into the beans, but he had no problems finding that huge plane  (video of that flight here).   As he was returning, I had an idea for a photo op:  here is what we believe to be the largest and smallest (the Found is a rather small Peanut) rubber-powered planes at the contest: 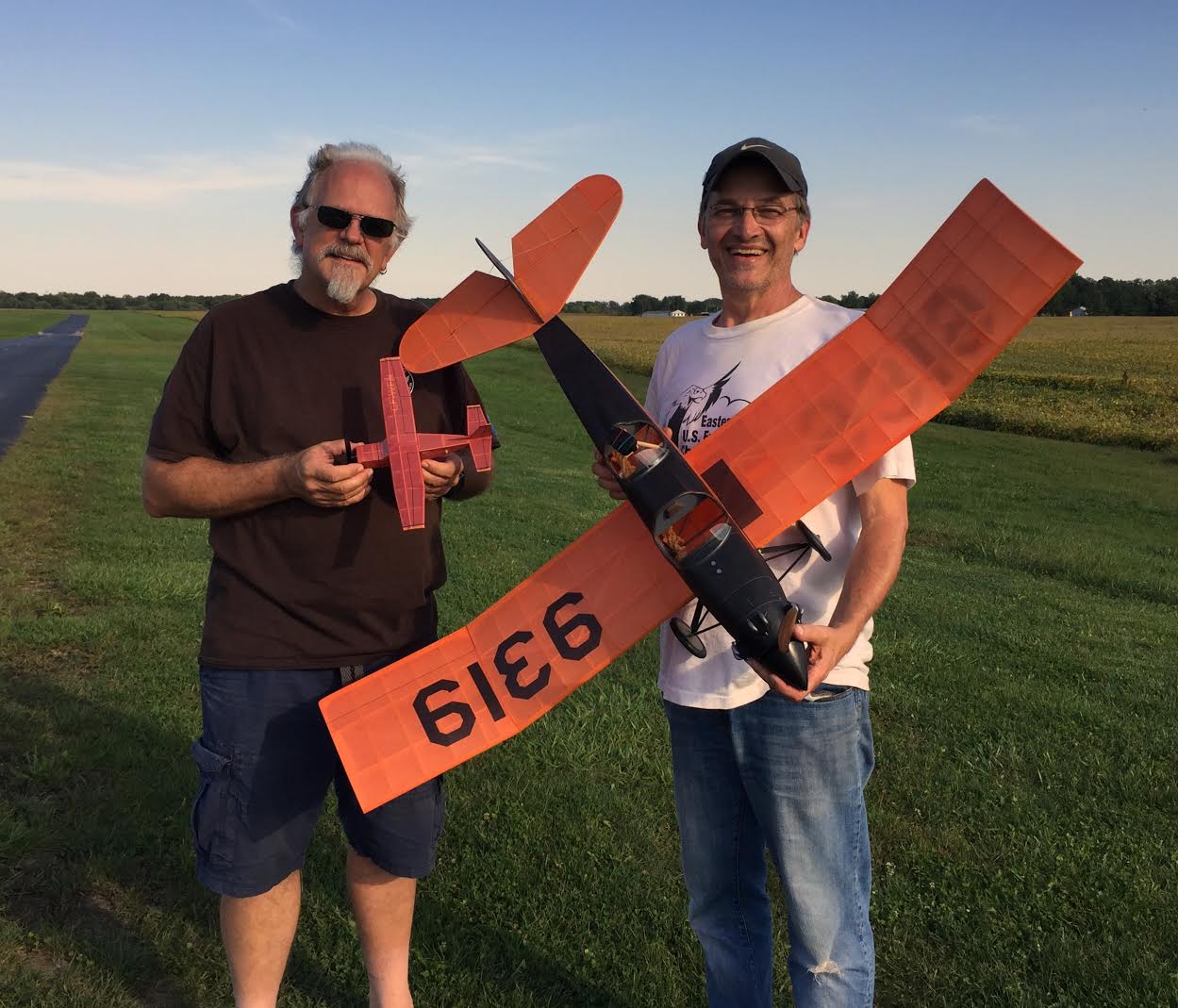 I fly a lot with my Indiana flying buddy, Pat Murray.  Earlier this year, at the AMA Nats, I filmed his Beriev twin-engined flying boat when he achieved a 90+ second flight.  He has been flying this plane for a few years now and it is flying better and better.  His goal has been to get it to max; to get that elusive 2-minute flight.  Well, Friday, he got it!  It was a spectacular flight.  I didn’t get any of it in video or photos because I was out in the field doing Jet Catapult.

Pat came in second in Jumbo to Tom Hallman and his twin-engined low-wing- by 1/2 point.  I know this was a disappointment to Pat, but he has to realize that Tom is an artist – by profession – and he beat Pat in the artistic areas of judging.  Pat needs to take pride in his accomplishment – it was a long time coming.  Well done, Pat!

***EDIT*** Click here to watch a video of his max flight, thanks to Tom Hallman.

Last year, I came home from the Outdoor Champs vowing to build an OT Stick.  I selected the Wanderer from Bob Horak, published in the March 1945 Model Airplane News.  I’m a sucker for twin-fins and this appears to me to be more graceful than the Casano Stick (my second choice).  I had started laying out the drawing, I finished that and designed parts, and laser-cut them.  I had the plane finished before Christmas, but couldn’t fly it until I went to Muncie in June.

I’ve been able to fly this at 5 events this year:  McCook @ Muncie in June, FAC Nats in July, AMA Nats in July, FAC Outdoor Champs in September, and the Ted Dock in September.  I placed 2nd, 4th, 2nd, 2nd, and 2nd at those contests.  Until this weekend, I had not been able to stack three maxes together.  And every time that I finished 2nd, Ted Allebone has won.  Here’s the story of this weekend.

In OT Stick on Thursday, I maxed out and so did Ted.  No one else did, despite the beautiful weather.  The flyoff was determined to be a Mass Launch – Ted and I would wind up, travel to the launch spot and launch when directed – last man down wins.  While I was winding, Jack spotted a broken strand in my 12-strand motor – no big deal.  As I continued, I spotted another.  I finished my winding and kept my torque down about 15-20%, just so I wouldn’t pop the whole motor.

Just as I was finishing up, Ted announced that he had a broken motor and I said he could replace it – this wasn’t a combat match and I was fine with it.  He took a few minutes and I walked out to where I wanted to launch from – on the far west end of the field.

We launched and Ted’s Casano Stick went sky-high while my Wanderer nearly stalled out on launch, but recovered for a decent, but not high flight. we chased in different directions and I noticed Ted had a terrible glide and was falling rapidly and mine was gently gliding.  I waved and called mine down and turned around just in time to see Ted wave his down – I had lost by less than 5 seconds.  When I got back to my table and pulled out the motor, I had 3 broken strands in the front of the motor and 2 in the rear – but I ALMOST won!

At the Ted Dock on Sunday, we didn’t have OT Stick, but we tried something new for us: we got approval to run an FAC Old Timer Dawn Unlimited event.  Our rules were any FAC Legal Old Timer (OT Stick, OT Fuselage, 2 Bit, Jimmie Allen, NOT Phantom Flash), in the tradition of Free Flight, we would gather near dawn for dead air and provide a 15 minute window for a single attempt with no max flight time.  Flyers would record and report their times and highest time wins.

We had a better-than-expected turnout – 10 flyers showed up ready to go!  And they preferred to do a mass launch as they are great fun and part of the FAC tradition.

So the 10 flyers arrived at the appointed time (7:50am) all wound up.  They lined up as follows, left-to-right.  Also, this shows their models, their original categories, and their flight scores and final positions:

My Wanderer put in a 2:29 dead air flight, but came in 2nd – to Ted Allebone (again!)  With a new motor, my plane put in a beautiful flight, but I could tell something was different about Ted’s plane – his terrible glide was gone!  When we were done, Ted confirmed that he fixed the glide with a 1/64″ shim under the leading edge of his wing.  Mike Welshans asked me “you didn’t really think he wasn’t going to fix that glide, did you?”   Nope, I expect nothing but the best from Ted!  One of these days, I will catch him – when he’s on a bad day.

I think everyone agreed that this was a FUN event.  Getting out there early was a challenge, but worth it on that day – what perfect weather we had that morning, that day and all four days of the contest.  What a last hurrah for summer and flying!