Much is said about “the Spirit of the FAC”, but what is it?  Sure, there is the competition, but it is the most good-natured competition – laid back and fun.  If I win, that is great, but just being with others of a like mind and hobby is the best.  Here are two other examples; one of my own spirit and one of another person.

On Day one, our “camp” was starting to fly or had been flying, struggling with the wind when out of nowhere a young man was passing through our area.  We were at the immediate south end of the field, and apparently, we were the first people that could be encountered because this young man found us.

His name is Michael Smith and he is from Texas.  Now it turns out he didn’t drive all the way from Texas, but he did drive over 8 hours from New Hampshire to come to the FAC Nats.  That in itself is not unusual – what is unusual is that he knew NO ONE at the Nats.  he never had built a complete Free Flight plane, did not have a local mentor, and had only watched videos on YouTube of FAC Scale Free Flight.  He convinced his pregnant wife to come with him on an adventure where he didn’t know a soul.  That’s some FAC Spirit.

We, in the Roscoe Turner and Cloudbusters squadrons welcomed him and gave him the general layout and introduced him to some other modelers.  Micheal spent much time wandering, exploring, talking, learning as much as possible.  Day2 was going to be a busy day for Jack and I and I suggested that Micheal and Lorena could sit under our canopy and observe how things went, if they liked.  They did and Lorena avoided more sunburn.

Because of the wind, things didn’t turn out well for Jack and I – we broke a lot of planes and didn’t have the best contest, but we enjoyed our time with Michael.  Around mid-day on the third day, I had an idea.  Michael had said that the Stuka was his favorite airplane of all time – he was building a Guillows Stuka.  Fate had brought him to the right place.

I had built a Mega Scale Stuka for this contest (here’s a pic).  I hadn’t done anything with the plane since I got there other than have it on display on Day Zero.  So I showed Micheal and a couple other people my Stuka.  One thing led to another and I actually put a motor in and gave it a test flight (another story). 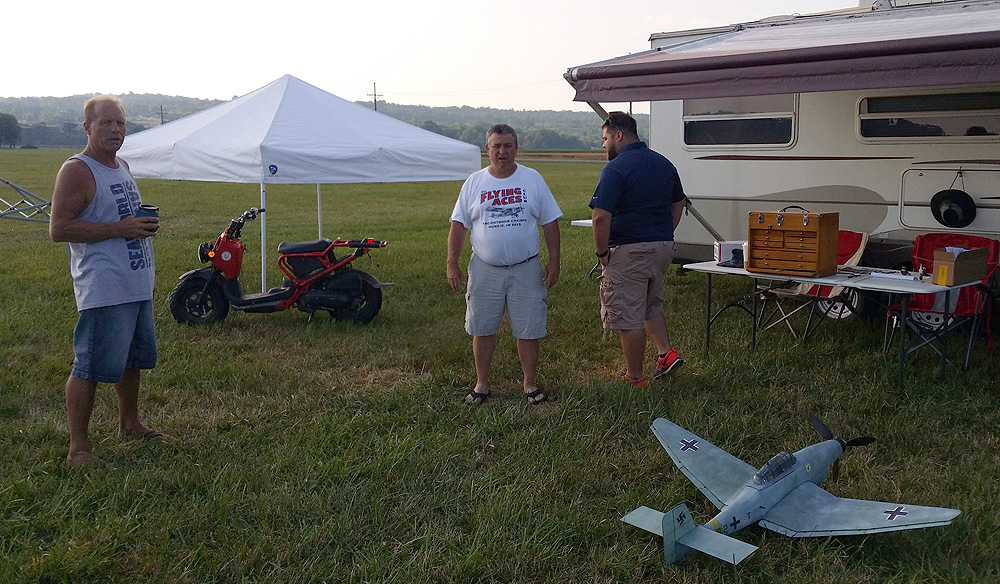 This inspired me to give Michael a real opportunity.  Yes, he had seen many planes fly.  Yes, he had helped other modelers with their models.  He had asked a ton of questions and received more information than he could possibly absorb.  He even built a stick model on the field and gave it a flight or two.  But I decided to give him the opportunity to FLY his favorite plane.  Quietly, I dug out my Peanut Stuka and gave it a test flight.

As I was picking the little model up after the flight, Micheal came running out and said “did you just fly that?  I missed it!”  I said, “yes, I was making sure it was ready to fly because I am going to let YOU fly it.”  I think he was shocked.

I gave him the little model and had him do everything with my coaching and direction.  I told him how to stooge the model, how to pull out the propeller and grab the rubber, and take off the prop assembly.  I told him to take the blast tube and hook up the wire and insert the tube.  I told him to hook up the winder and stretch out the motor.  I told him to count his turns on the 15:1 winder and stop when he got to 100.  Then I had him feel the rubber, noting that it was still elastic and not yet hard.  I coached him to slowly move in while he put in 20 or so more turns.  Then I told him how to carefully remove the blast tube and re-attach the prop, noting which side of the nose block was up.  Finally he removed the plane from the stooge and we went out into the field. 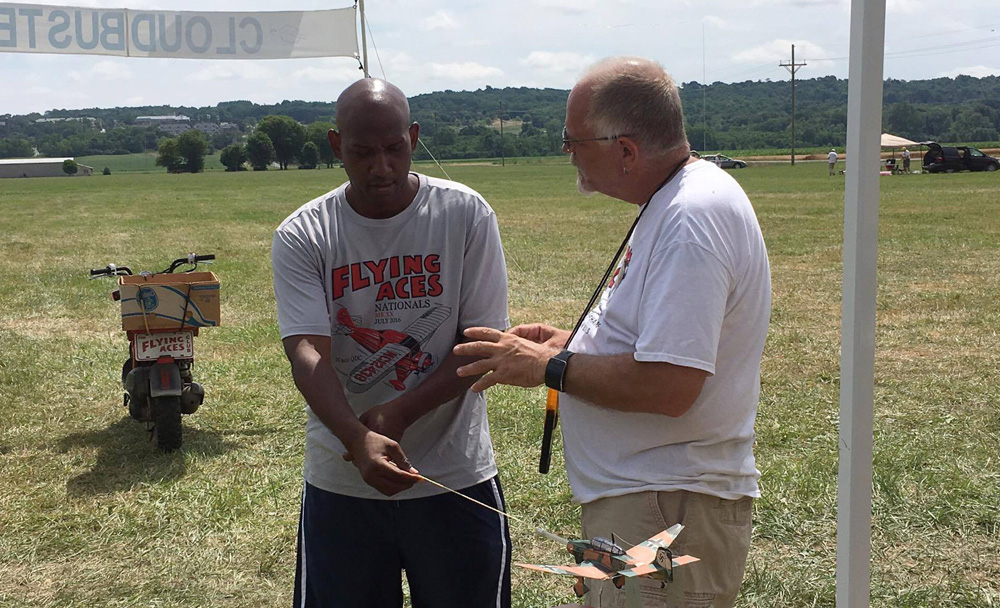 I don’t know if he was nervous – he was very attentive and listened well.  Jack took a video of us in the field.  Because of the wind (not ideal teaching conditions), we can’t hear what I was telling him, but I have captioned the video with the important thoughts.  The flight didn’t go as I had planned – I think I told him to come off the wind just a little too much.

But I hope Micheal got an experience and a taste of what it is that we do.  To me, there is no better way to teach than with hands-on.  Watching videos is great – and importantly, it got Micheal from Texas to Geneseo – but the real learning in this complex hobby comes with mentors and hands-on.  When I was young, I had to drive a couple hours to Cleveland and it was under the mentorship of the Cleveland Stork Squadron that I finally began to have some success with my models (and I will forever be grateful).

Sharing what we know and passing on our knowledge is the only way that our hobby will survive.  The FAC is strong, but we all need to help the next modelers join our ranks.