The Long Road from Idea to Kit

I’ve had real conversations with friends and customers that go something like this “well, that can be your next kit!” I’ve imagined that some customers don’t understand what goes into producing a kit, even a short kit – at least out of this shop.

Part of my business philosophy for the products I create is that they must be tested and proven.  In a way, it even goes beyond what I create; it is also why I don’t carry electrics or gas or r/c –  I just don’t know about those areas, so I don’t want to offer and promote something and create a false sense of endorsement or quality.

When I started offering my drawn plans, I didn’t release any until they had flown the FAC minimum official flight time of 20 seconds.  This carries over into the kits and short kits that I create: every one has been built and tested and “passes muster”.

So, over a year ago, I started to work on a Jet Cat.  It’s a simple event that you can do in a smaller space or in worse weather – or just for fun.  Gliders are NOT an area of my expertise and starting from scratch has not been an easy process.  Here you will see a photo showing my progress to date.  (more story below) 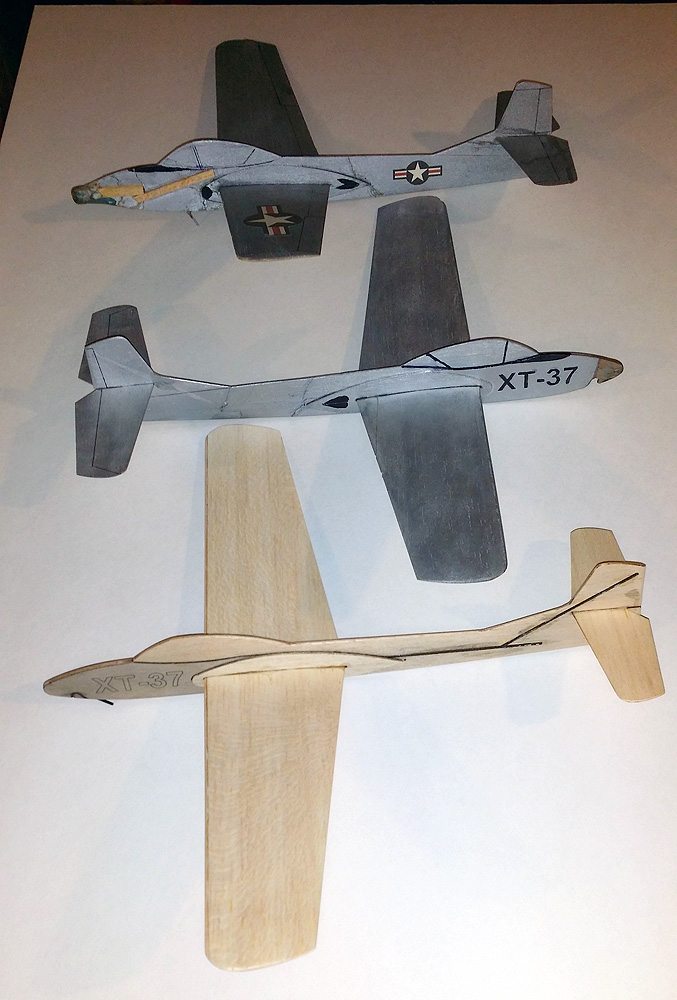 This is my Cessna T-37 Tweet Jet Cat.  I chose the design because of the proportions and simplicity.  You see three versions.  The top version was completed in January of 2015.  It featured a laminated fuselage; the layers sandwich kevlar tow.  The thought was to strengthen the fuselage.  While keeping it light.  You can see how “successful” the strengthening was – there are, at least, five fuselage breaks in that version.

The middle version was done sometime last summer to replace the first one.  If you look closely, you can see sticks of bass wood instead of the lamination.  That was an improvement but not really very much.  I did reinforce the front by designing 1/64″ ply sides that did a good job of making the nose stronger.  These ply sides only extend back as far as the engine pods.  The second version also has bass leading edges on the wings and a penny embedded in the sandwich of the nose.

The third version was built this week.  Changes include carbon fiber rod for strength and a smaller horizontal tail area (recommended by a friend).  This version hasn’t flown yet, but looks promising as it has a nice glide in a hand toss without weight or adjustment.  These all weigh between 17 and 19 grams for the 14″ span model.

If – IF – I can get this to fly, the kit will contain a sheet of 1/16″ balsa (fuselage), 1/32″ balsa tail and engine pods, 1/64″ ply nose doublers (etched with the prototype XT-37 designation, as shown), 1/8″ balsa wings, plus the bass leading edges, carbon fiber rods, adhesive sticker markings, and the penny nose weight.  I may never get this into production, because, as I said, Jet Cats are a struggle for me.  Much of the damage occurs during test flying; trying to get a predictable flight pattern!

This is why it takes me so long to get a kit to production.  I have to be satisfied with the product and its potential for performance.  This doesn’t even consider all of the hours of drawing the plan and laying out the parts for laser cutting.  At any given time, I have about 3 or 4 new kits in the process of development.  That is my short list.  Then I have the short long list, those that I intend to work on next.  The long long list has those designs I consider viable and good candidates.  I would estimate about 20 designs are on these lists, just waiting their turn.

1 Response to The Long Road from Idea to Kit