My NoCal Barracuda – a Study in…Perseverance?

When I decided to take my “talents” to Colorado and drop in on the Magnificent Mountain Men’s Pike’s Peak Ceiling Climb indoor contest, I wanted to fly in all of the Flying Aces Club events: Peanut, NoCal, and WWII NoCal Combat.  I had two Peanuts to take and an indoor NoCal, but I had no WWII NoCal.  Years ago, I had designed a Fairey Barracuda and decided to build one of those quickly for this event.  I quickly converted the plan to laser-cut the parts necessary and slapped the frame together.  I then blew up the images I had used for my Peanut Barracuda’s printed tissue and printed them out for the NoCal.  I made a semi-adjustable nose bearing (more on that in another article), and put on an 11″ Ikara Indoor prop, trimmed to the maximum-permissible 7″ diameter.  I packed up my models and mailed them out west, without more than a test glide on the NoCal. 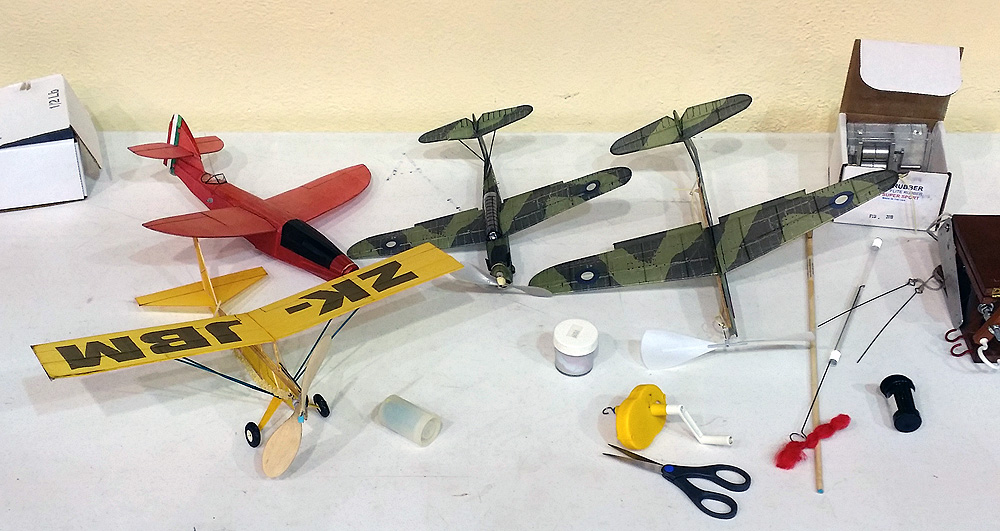 On the contest day, the first two hours of the contest were dedicated to Hand Launch and Catapult gliders.  The Scale and other “heavy” events would start at 11am, with WWII Combat taking place at 2pm.  This meant that I could use the first hours to cut new rubber motors for all of my planes, observe the CLG & HLG, and just do a small bit of socializing and conversing.  The venue (the Civic Auditorium in Colorado Springs) is a nice small indoor site with a  smooth ceiling – it was the site of the 2015 AMA Indoor Nats.  There were even spectators – people that showed up, unaffiliated with any of the flyers, just to watch the activities.  By coincidence they sat in the box seats right behind my table and we chatted throughout the day.  After I cut the rubber to the sizes I thought I would need and loaded all my planes, I laid out my game plan:  I would test each of my known models to make sure I knew what to expect, but the primary goal would be to get my new model flying.  I have seen Indoor NoCal before – both flavors would be a great challenge for me, as I do not pretend to understand the mysteries of Indoor flying.  I fly Outdoor and slow flight is not something we shoot for; we usually try to put as much distance between the plane and the ground as we can to gain the advantage in the glide.  Indoor has no glide and fast climbs are generally a bad thing. 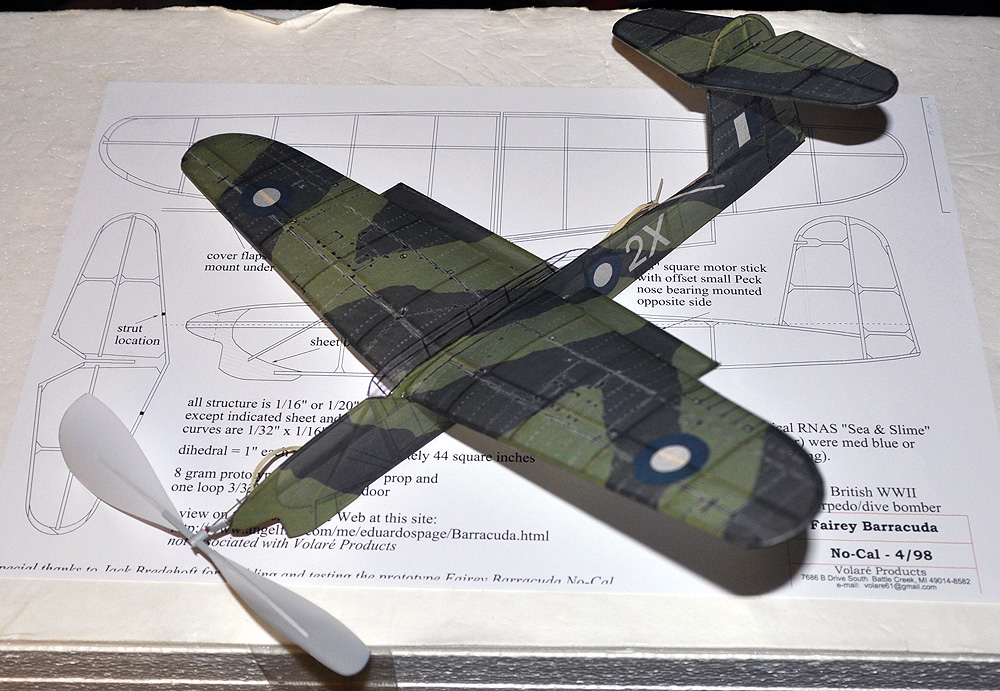 During this initial time, I chose to not fly one plane (it seemed to fly too fast for my comfort) and got some quick trims on the two other older planes.  Now to focus on the brand new plane.  I had hoped to fly it on a loop of 1/16″ rubber, since the plane only weighs 6.7 grams (just over the minimum 6.2 grams), but that motor wouldn’t fly the plane.  It took some time, but I finally got the plane to circle left and appear to be somewhat stable, but it just wouldn’t do much else.  So I then moved up to a loop that was flying my other NoCal – about 5/64″ – This improved a little, but not much.  I resorted to trimming the width of the prop blades and then the diameter – but this motor still wouldn’t pull the plane up, no ability to climb.  I then stripped a loop of 3/32″ rubber and things started to shape up. 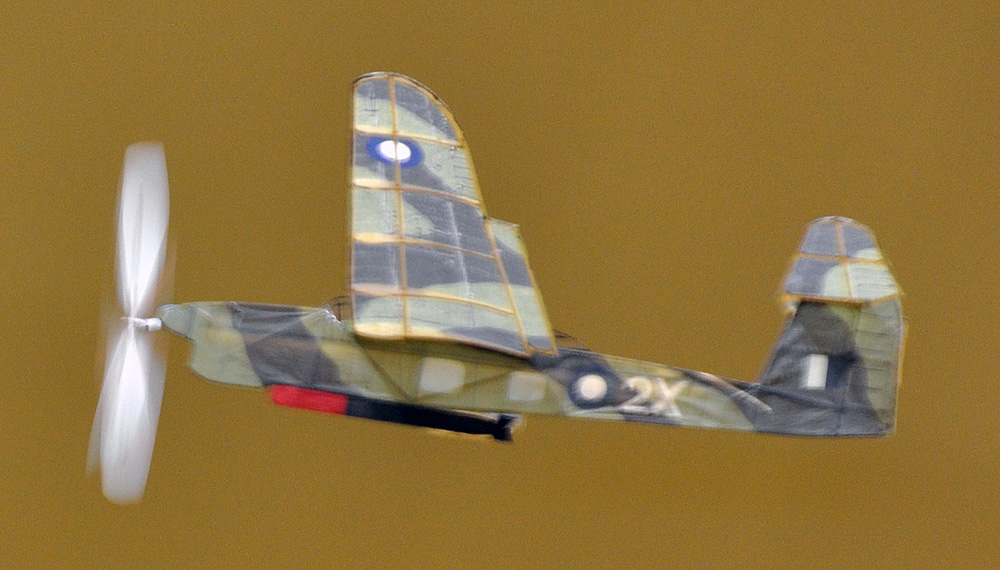 In one test, I actually had it go up pretty fast – too fast – it was banging on the ceiling.  That had to be tamed, as that robs performance and can lead to disaster – crashing into a light can cause a dive or a skid down the wall or a misdirection into the stands – nothing good can come from it.  So, I tweaked the thrust settings more and more until I got a steady climb and cruise and circle – except I couldn’t get that – something was always getting disrupted and what started as a good flight would fail to finish.  One of my neighborly observers asked jokingly “do you really want that left wing stalling all the time?”  I laughed out loud and said “Haha! No!  But thanks for pointing my failures out to me!”  Of course, he was right – my plane was unstable.  I knew that already.  But – that made me think – I took a look at that left wing and somehow it had developed a great deal of wash-in.  It took me cracking that trailing edge in two places and re-gluing it before I was able to get a good set in it and then things started to look good for my plane.  That’s when the large steady circle became a reality.  The model would now climb up to about 3/4 of the way to the lights and use the entire width of the room.  Part of indoor flying for me is figuring out where to stand so I don’t hit one wall or the other.  I finished up with the tweaking about 10 or 15 minutes before the Combat.  I might have been able to get a little more climb out of it, and I was landing with rubber left, and it was flying faster than everyone else – but it was flying consistently.

Now my host, contest CD, and expert Free Flighter, Don DeLoach had warned me “this is a lot of fun – we get about 2:30 out of these, so be ready”.  Yes, as I said, I’ve seen WWII NoCal Combat before – flown by guys that can make a Penny Plane fly 5 minutes:  it’s a little discouraging for an Outdoor guy, but I was ready nonetheless.  At least my plane was flying consistently, even if it was only doing about a minute.  I would “represent” as best as I could.

Combat is a form of Mass Launch for models of war planes, in this case from the WWII era.  In the Flying Aces Club, a mass launch must go at least three rounds, eliminating a single or a group until there is a winner – the last plane flying.  I had seen 7 or 8 WWII NoCals being tested, but when Don made the call, there were only 5 participants.  FAC Mass Launches are notorious:  they bring the increased level of nerves due to the head-to-head competition.  They include a little bit of strategy – what can I do to make my chances of survival better – and how to I manage my techniques by round?   And there is a bit of luck involved – especially in a confined area where several planes are occupying the same general cylinder of space.  We assembled at center court, but we were down to four, as one guy broke his plane while winding.  The four of us spaced out a little, and I found my spot, and tried to replicate what I had done before.  As the official called “3 – 2 – 1 – Launch!”, I made sure that my plane took off just like I had practiced.  I noticed two things:  1- my plane climbed to altitude faster than everyone (good and bad – I got out of the way of everyone, but my duration would likely be shorter) and 2- a plane hit the ground right away.  Since the first flyer down was the only elimination that round, I knew right away I was on to the second of three rounds – I could do no worse than 3rd place.

It is not unusual for someone to screw up a launch in Mass Launches.  Nerves get to people and the forget what they should be doing.  This, however, was a shock:  Don was down first – his Spitfire (in my mind, the plane to beat) went down in half a circuit.  He was stunned.  As he examined it, and discovered some fatal break had occurred and, due to his busy involvement managing the contest, he had failed to examine his model before the flight.  Don is meticulous.  He knows his planes and virtually his entire fleet of aircraft is well-built, well-maintained, well-trimmed, and well-documented so that he can literally pull a plane out of the box, load up a motor, and fly it to victory – as he did in several other events that day.  But this time, the motor stick and fuselage had separated to a degree and the plane was not flyable.  He was first one down in an event he should have won.

That left three of us:  Jerry Murphy, Mike Fedor, and me.  We again assembled at center court and were given the launch.  Again, my little Barracuda carried its torpedo aloft quickly and settled into its fast, sweeping circles.  Before I had completed a quarter of the circuit, I heard a clamor to my left – the Wildcat and the Corsair had collided and both planes fell to the ground.  Mike’s Corsair had hit the ground first and was eliminated.  Jerry’s Wildcat followed a second later, but his indoor sheet wood prop was broken.  He took some time – at least as much as it took my plane to fly around and land – to ponder his situation, but he announced to Don that he would need to withdraw.  Don called me to the court with my plane and said “3 – 2 -1 – Launch” and I gave my Barracuda a toss, gliding for the win!  I had coaxed my brand new plane from being a non-flyer into something stable and repeatable and, through that preparation AND A GOOD DEAL OF LUCK, I had come out on top!

MASS LAUNCH LESSONS.  Mass launches are fun – fun to watch and fun to fly.  Sometimes they require the best flying plane out of several best flying planes.  And sometimes, fate intervenes and gives the win to someone who just shows up.  I have won many, many mass launches in our local clubs.  I would say there are four parts to winning:  Participation, Preparation, Coolness Under Fire, and Luck.

Participation – you cannot win if you do not participate.  So, if you have a qualifying model, don’t be afraid to join the fray.  Just like the lottery, you can’t win if you don’t play.

Preparation – know your airplane and get it to fly consistently.  Take time and trim it to fly how you need it to fly. Wind it the same way, launch it the same way.  Stand where you need to stand (indoor) or face the proper direction relative to the wind (outdoor).

Coolness Under Fire – some people get nervous participating in a mass launch.  And sometimes they are nervous to a point of distraction.  Most often, this occurs in a blown motor during winding – trying to get more power.  Or when they do get more power, they don’t know how their plane will handle it and it zooms or torque rolls.  Sometimes, they just get flustered and mess up the launch and they are out right away.  If there is a large mass launch, and if your plane can fly a minute, you can almost be sure of making to the next round if you simply prepare and stay cool.

Luck – the Fickle Finger of Fate (probably on the right hand of Hung) will often touch the contestants in a mass launch.  There will be collisions, crashes, fly-aways, lost planes, pretty much everything you can imagine.  And sometimes that Finger will point to the most unassuming plane as the winner.  A good percentage of my Mass Launch wins have come, not because I had the plane that would fly the longest, but because I participated, was prepared, was cool, and was lucky.