Posted on 24 September 2015 by Bredehoft

Jack and I went down to Muncie on Wednesday afternoon.  We left Battle Creek around 12:30 and arrived about 3:45.  We were very surprised to see so many people already there!  We had anticipated about 50 registered contestants (48 was the final tally) and about half of those seemed to be on the field for a beautiful afternoon and evening of flying.

I love going to the AMA flying site: it’s a huge site for FAC events, it’s relatively close, and when we get a lot of people, it’s a really fun time.  I attend four contests a year in Muncie and the FAC Outdoor Champs is the biggest.  After checking the flight schedule for Thursday and Friday, I figured I could sell and fly on both days, since I only had to log flights in 4-5 events each day.  And the flyers barely let me get started to test on Wednesday before they were handing me money (to trade for product!)  Sales went well thought the contest;  thank you to all of my customers.

I thought had just a glimmer of hope in NoCal.  At Geneseo, in July, I had put up a very respectable series of flights and was sitting in first place – until Wally Farrell came along and lost his model on a 9+minute single flight.  NoCal is the total of three flights with no max flight time (the only FAC event with no max).  His single flight time just beat me and I had to settle for 2nd.  My hopes were that his new NoCal would not beat me this time.  I again put up some respectable times in the morning and thought maybe the winds picking up might keep my scores in #2.  In the middle of the day, wally had logged flights – and they were lower than mine!  But by the end of the day, he had a different model top my scores and so did Mark Rzadka, so I settled for 3rd.  Wally beat me again!

I like to compete, but in unexpected ways.  Currently, I fly Old Time Fuselage with a Pacific Ace Junior – not a regular Pacific Ace, but the little-know Junior.  This is a 15″ span model that really looks like a Peanut sized plane.  It is so small that it cannot fit into Embryo class.  I’ve had it for 3 years or so and finally figured out how to make it fly.  I’ve even been told that it can’t win.  Well, my second and third flights were maxes with the last being over 5 minutes and me losing track of the model.  I found two other lost models while searching, but couldn’t find mine.  I think I ended up in 4th or 5th with the little plane.  Someone DID find it Friday – after the heavy rains came through. 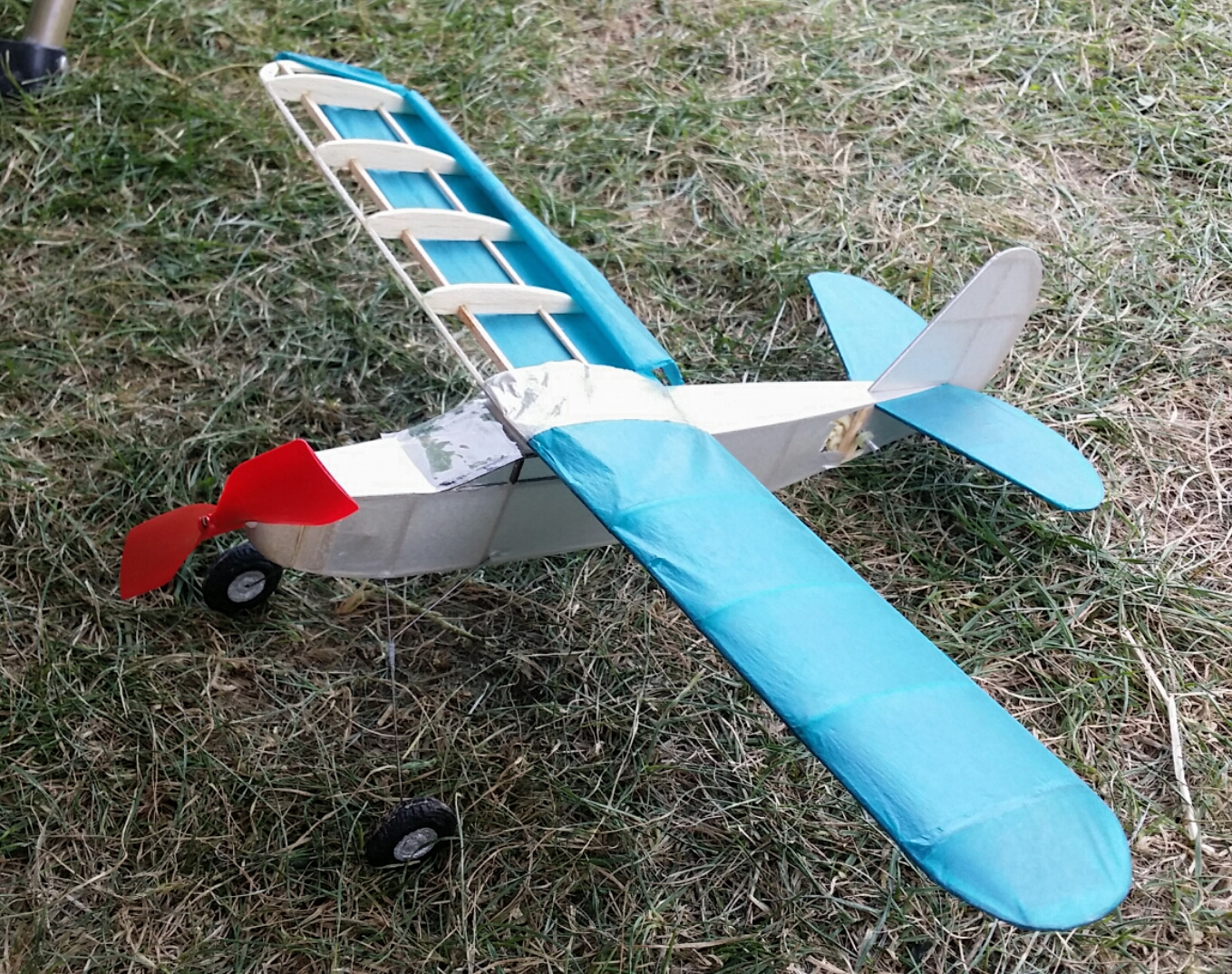 My other big story involved my venerable Goodyear racer, the Falcon Special II.  I designed and built this under the direction of Russ Brown in 1998 or 99 for publication in his Crosswinds newsletter.  It did very well for me in 1999, earning 5 kanones.  It was one of the planes that survived my lengthy hiatus and even one another kanone in 2012 – when it flew into a bean field and a found it by stepping on its wing.  Since then it has been like an old favorite dog that shows flashes of its old self, but you just don’t have the heart to put it down.  Thursday night, I tried a test flight so that I would be ready for the race on Friday.  Well, the model rolled right and nearly broke off a wing.  With the field repair, the thing is really suffering now.

I think there were 10 of us for the race!  I made it through the first round easily; even Jack commented how well the plane was flying.  In the second round, I survived, but the performance wasn’t the same.  Before winding for the third round, I checked the motor – there was a big nick in the motor by the prop shaft.  I decided to try to nurse the motor through the winding.  I slowly wound, trying to ease in turns, until the strand snapped.  Since I was going slowly, only the one strand broke, with its ends captivated by the knotted motor.  I immediately stopped with the winder and put the prop on and started doing the old 1:1 ratio winder, turning the prop slowly and carefully.  If I could just get a few more turns in, maybe some other hapless pilot would dork in before I fluttered to the ground.   After several turns, Jack says “it’s getting kinda tight!” – well, it popped.

Now I had a choice:  Let the other three pilots fly without me or just give my model a hearty toss and hope for the best.  Tom Hallman captured the moment of launch for the four of us (that’s me closest to the camera).  My tail heavy model did a large figure 9 into the ground – and a second later Jack Tisinai’s Hot Canary went in!  If I had only stopped hand winding, I would have got third place! 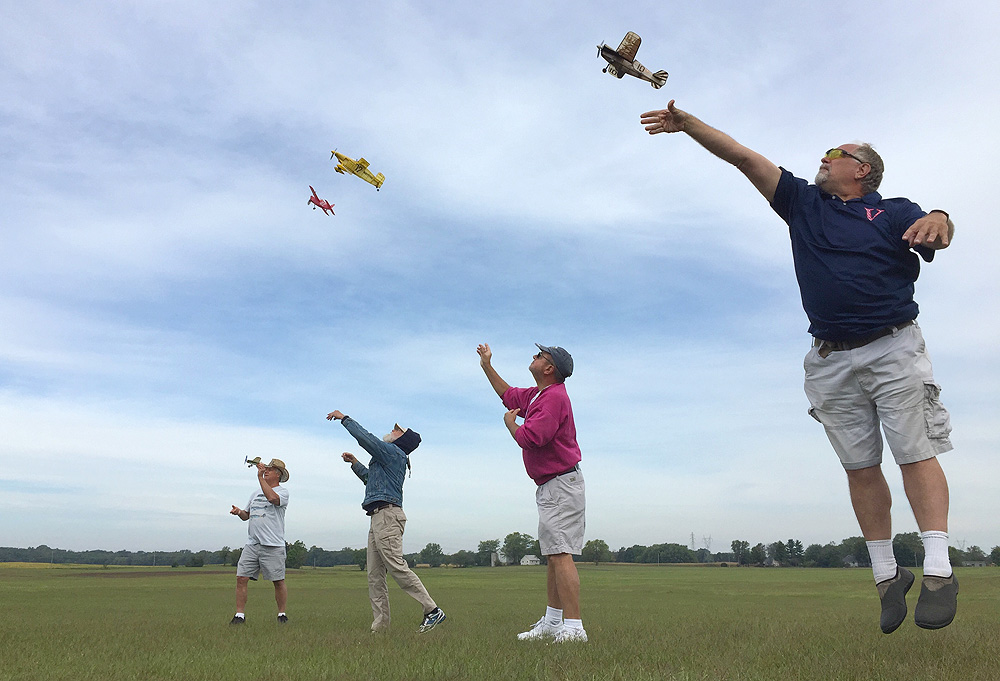 The last (short) story:  I am very happy to have placed second in Peanut.  My no-bonus-point Barracuda could not catch Tom Hallman and his 30 bonus point Bleriot. But I was able to get a better score than Wally Farrell and his Floyd Bean – and he maxed!  Placing between these two is not an easy task!

Overall, it was a wonderful contest, the last big one of the year.  I had a great time with friends and realized that I have a bit of a Zen attitude about flying – whatever happens, happens.  As my flying buddy, Chris Boehm says, “a day flying is better than a day without flying!”