After placing 3rd in Scale with a new model (Keith Rider R-2), 3rd in WWII with a new model (Peanut Barracuda), and 3rd in Old Time Cabin with a most unlikely model (14″ span Pacific Ace Jr), Friday was my day to try to excel.

Peanut Scale has always been a favorite to me; it is probably responsible for my entry into Free Flight, as I was inspired by the centerfold plans in Model Builder magazine, which were often Walt Mooney plans.  It was because of Model Builder and these plans that I shifted from r/c to FF.

On Friday morning, under a cloudless blue sky, I took out my Peanut Fairey Barracuda and tried to put in a time.  I figured it got a pretty good static score and I wanted to get some flights in on it before the winds came up (they were predicted to get up to 15 mph or so by early afternoon).  The Barracuda had flown 1 minute the day before in the WWII Mass Launch, so I expected a respectable time.  It was not to be.  I couldn’t get an official after a couple test flights and a couple of official attempts.  So I put it back in the box.

After a few minutes, I grabbed last year’s winning plane, my Pegna P.C.1 and decided to give it a shot.  I’ve been getting around a minute plus with it recently, but know it can catch air.  I wound it up, probably 1700 turns or so on the loop of 3/32″ rubber and called for a time.  I waited for a little until the air felt right and launched the little red plane.  It dutifully and purposefully climbed up in a left hand turn, getting higher and higher while I started chasing on my bike.

One problem with winds from the west in the early morning is that the model goes down wind and you are trying to follow it while it flies up by the sun – then you have to navigate the bumpy field on your chase bike.  Add to this a large swampy area in the middle of the flight path that must be skirted, sometimes by going north when you model is going south and you have a problematic situation.  My plane was getting higher and higher – into the sun and over the swamp.

But all’s well that ends well and my model finally came down after Hung teased it with a fly-away.  It cleared the swamp and eventually landed gently on the field.  My flight time was 1:51 – nearly the 2 minute max.  And that was just pulling the plane out of the box.  I got back and was happy.  I put the model down and sat back for the rest of the day, since there was a really good chance that the time would hold for the win – and this was around 9am or 9:30.

In the early afternoon, the AMA CD (Mike Fedor, I think) came over the the Flying Aces tent and showed us a trophy.  He said that it resides in the AMA museum and is the AMA’s Walt Mooney Memorial Perpetual Trophy to be awarded to the champion in the Peanut Event.  He said that AMA had allowed that several of the perpetual trophies be displayed on the field and the champions could have their photos taken with the trophy, but they would be returned to the museum.  He mentioned that past winners could also have their photos taken with the trophies.

I will settle for a single photo.  This is a proud moment for me.  I was unaware of the AMA Walt Mooney trophy, but I have seen many trophies in the museum.  I think the AMA has been lax in engraving the names – most of the trophies were not up-to-date.  Maybe someday my name will be on this trophy and if so, it will be on there at least three times, as I have now won this three consecutive years: 2013, 2014, and 2015. 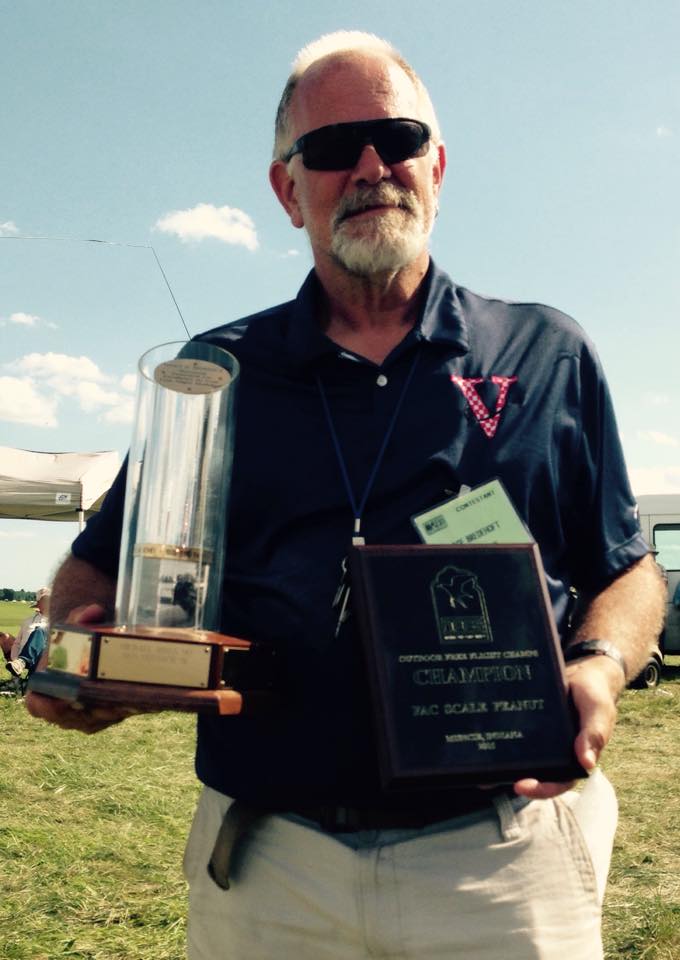 (thanks to Don DeLoach for the phot0)