This weekend, some of us braved the remnants of Tropical Storm Bill and hoped to get some flying in as Dayton McCook Field Squadron scrambled to their annual contest at the Muncie flying site.  Many decided to stay away because of the forecast.

It seems Indiana has been getting a LOT of rain.  My first indication was 45 minutes north of Muncie as I exited the highway at my normal exit and found the Wabash river over its banks blocking my way.  That delayed my arrival Friday night.  Saturday morning broke with full overcast and a 10 -15 mph wind blowing from the northeast.  Since the Sunday forecast called for 25mph winds with higher gusts, we decided to compress the two-day event into one day.

The Muncie flying site is now populated by many rain-fed lakes and all but the highest ground was squishy with water or even hiding an inch or two of standing water.  Boots were the order of the day, although sometimes, even those were useless.

We all set up on the road near the cemetery on the eastern side. This was the lake a couple hundred yards west of our base. 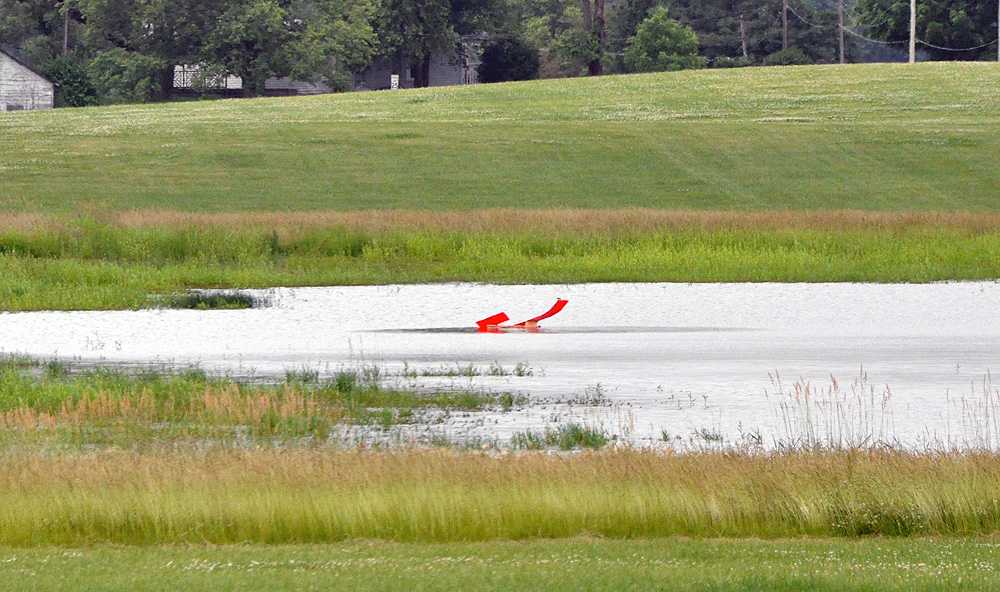 That is an AMA power ship from the group that was to our north.  Unfortunately, Pat Murray and Jim Bair both laded in that puddle at least once.

The half a dozen or so of us that showed up made a valiant stand.  I had planned to fly 16 out of 19 scheduled events over two days, but that was reduced.  I only flew in 10 events and 3 of those that I declined were not flown at all.  Pat Murray and I really pressed forward and we battled our friendly battles all day long. 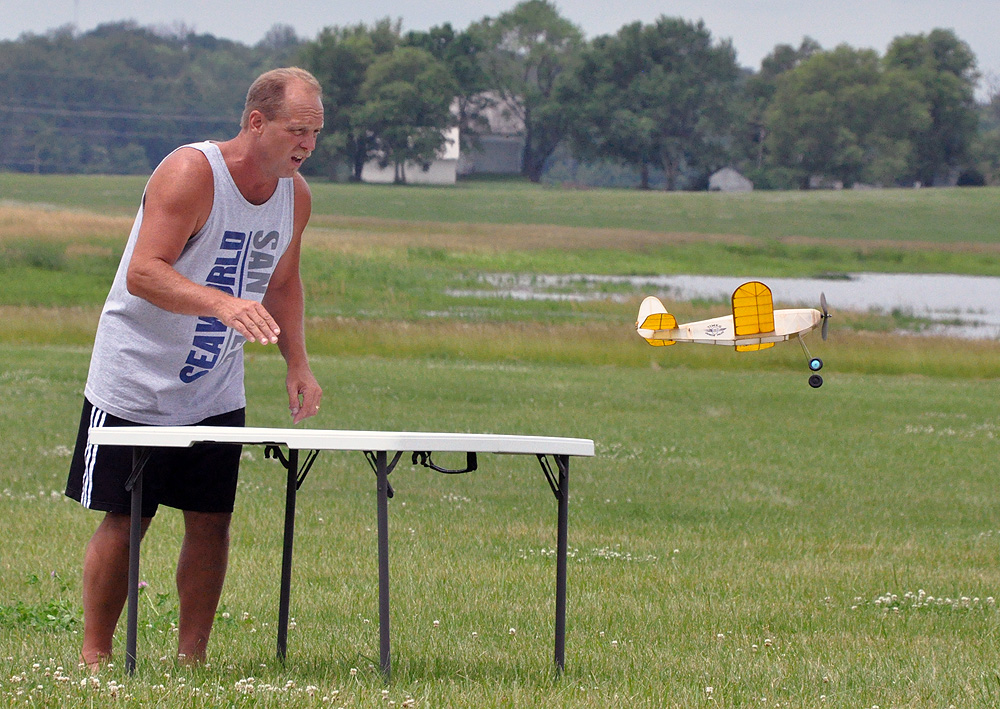 I was first out of WWII, the fault of a too-long motor.  Here is a shot of Jim Bair’s 3rd place MiG.  Marty Richey (Focke-Wulf 190 Dora) was second and Pat Murray (Boulton Paul Defiant) took the win. 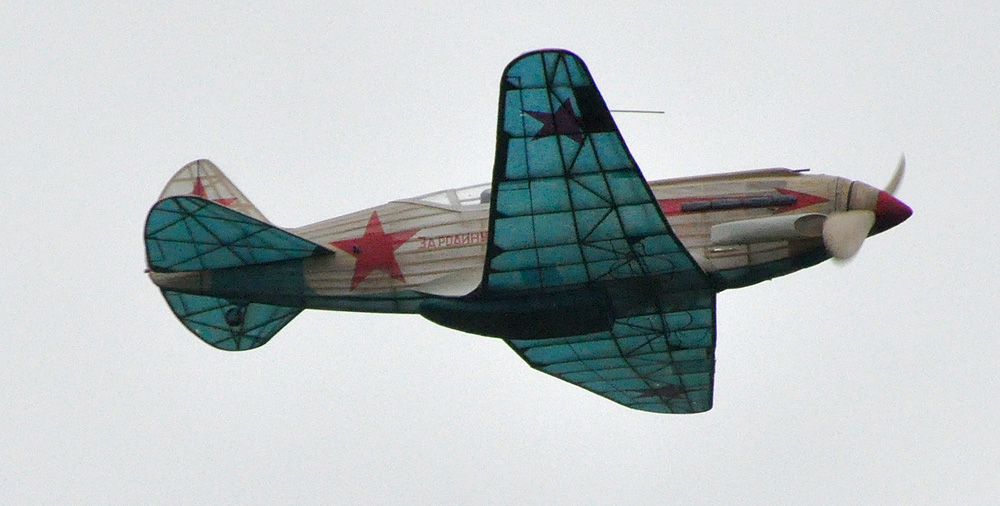 I also took 4th in Jet Catapult, with Jim Bair and Pat Murray trailing behind Elvin Bueschle.  Elvin also placed 3rd in Jimmie Allen (in the photo), Pat Murray took second and I flew my JA Special to first place.  Elvin and Pat were flying Skokies. 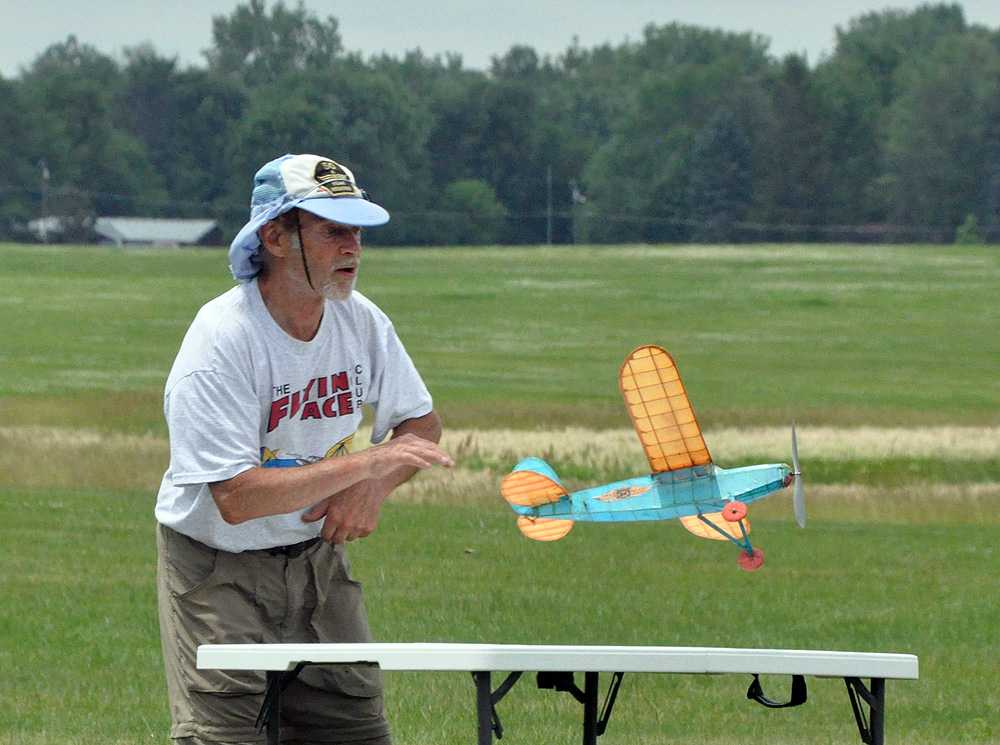 I took second in OT Stick (behind Pat Murray) and OT Fuselage (behind Pat Murray), but I only got second because Stu Cummins and Lee Campbell only put in single flights, not wanting to chase across the wet marshes of the National Flying Site.

Here are two of the three Greve/Thompson Racers: my Caudron (2nd) and Jim Bair’s GeeBee (3rd).  There is no photo of Pat Murray’s Mr Smoothie whose erratic and acrobatic flight stole first from my stable flying Caudron (stole, I say!) 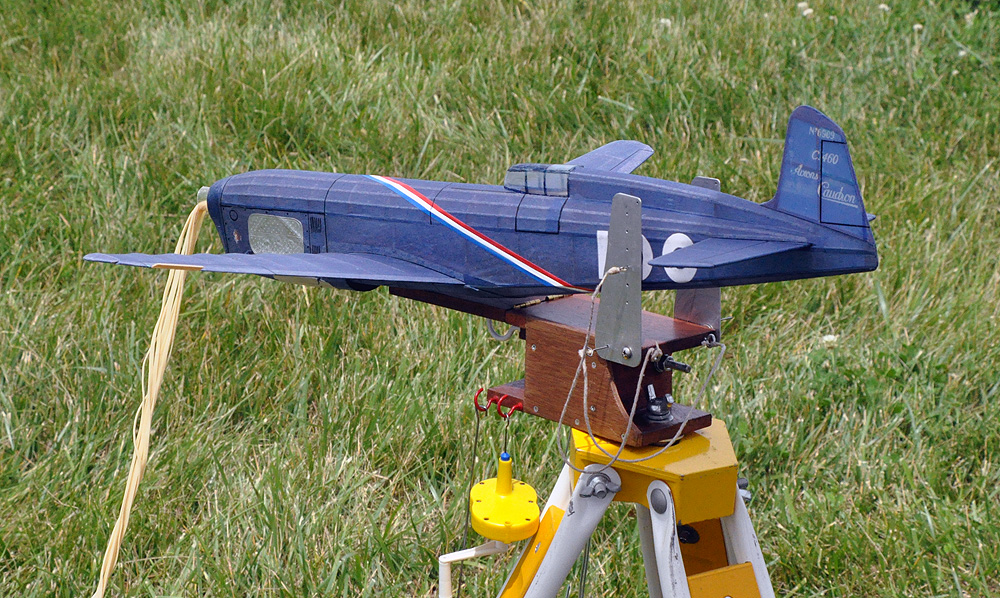 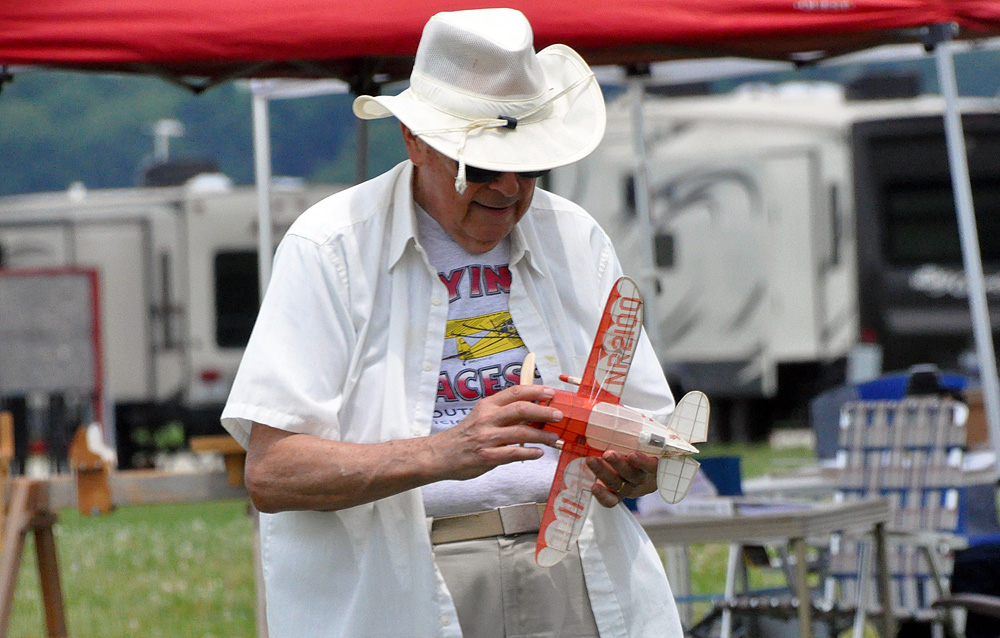 I am sad to report that no one besides myself attempted flights in the McCook Watson Challenge.  In this, you can fly any plane in any manner you like as long as it is powered by the CD-provided 24″ strand of 1/8 rubber (you can even use it as a catapult) – best two out of three flights.  I powered my Pacific Ace Jr to 50-60 second flights.

I also eeked out a win over Pat Murray and Jim Bair (I think?) in Phantom Flash – that was a new and untested model that took the win.  Another brand new model from me was my “Bad Axe” embryo.  This plane put in the last three flights of the contest, finally ending at 8:10 pm.  We had switched sides of the field and we were now on the west side flying east-north-east towards more lakes.  Stu Cummins had logged a flight or two in Embryo earlier,  and I had watched Pat Murray put up some pretty good times with his Big Cat.  Rather than throw up a concessionary flight on my Sky Rocket, I decided to go for the win with the Bad Axe.  A few test flights and then a new motor.  I put in flights in the 70-second range, 80-second range, and the 90 second range – and took home first place. 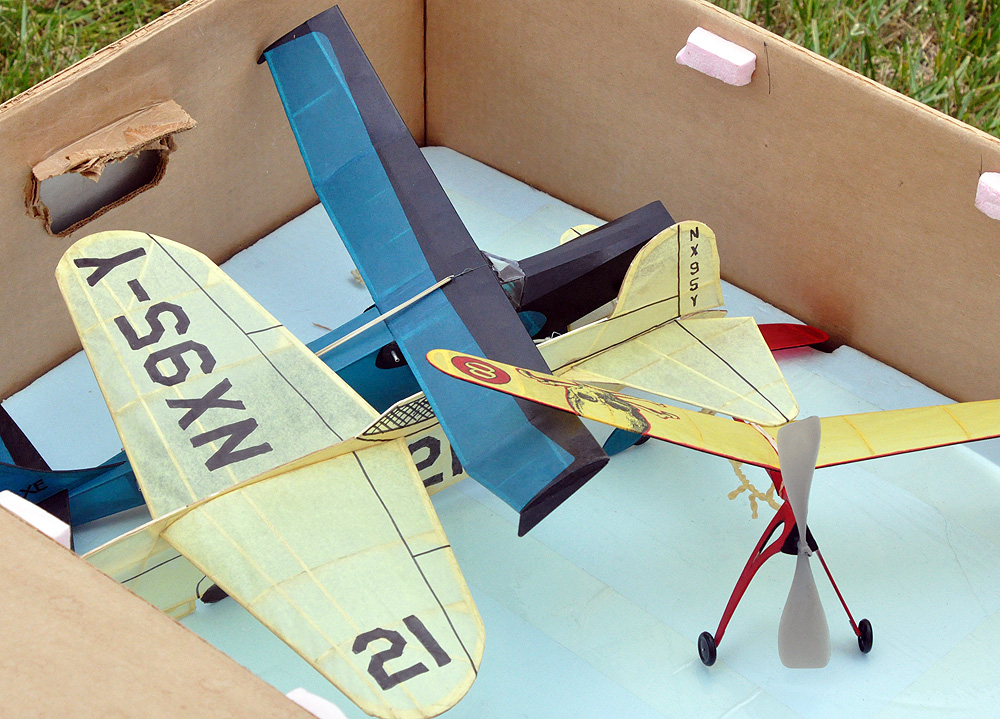 I logged 30 official flights on Saturday with an untold number of test flights.  Pat placed similarly high number, he also took home first place in Scale, NoCal, and (I think) Golden Age.  We sat around and chatted all Sunday morning under sunny skies, but ever-increasing wind.  We probably could have flown, but we had decided to fly the day before and this let us get home early.